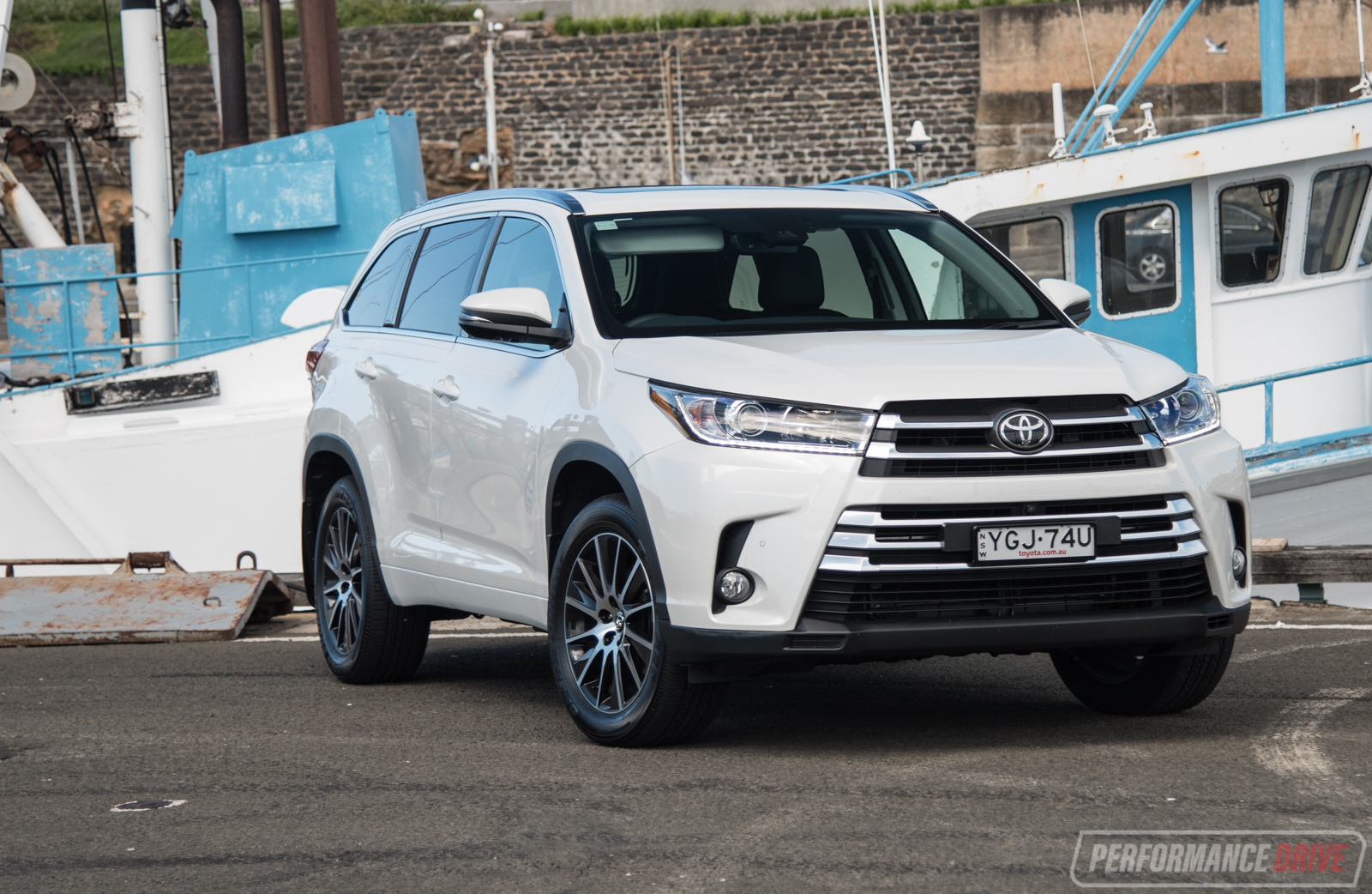 Has Toyota reinvented the seven-seat SUV market with the MY2017 Kluger update? Not really. But it has tweaked and enhanced its tried and proven formula to give it a sturdier, more competitive stance in the class. 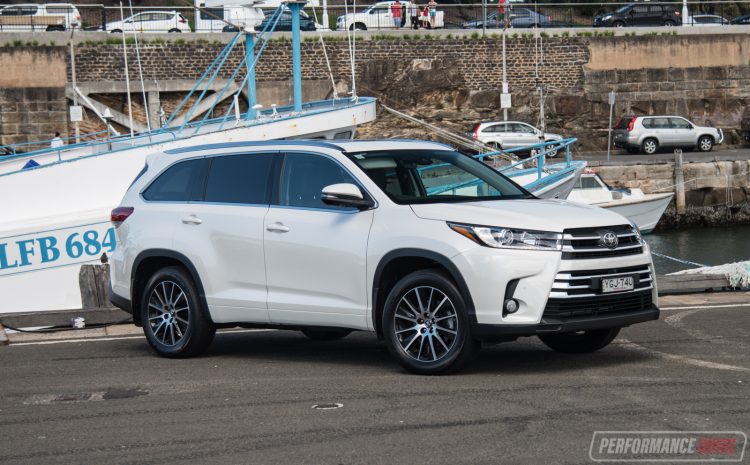 Toyota Australia introduced the updated Kluger in February, bringing a smart new look for the front end (for the better, in our opinion), while breathing more power into the 3.5-litre petrol V6. A more advanced eight-speed auto has worked its way in to help with economy as well. 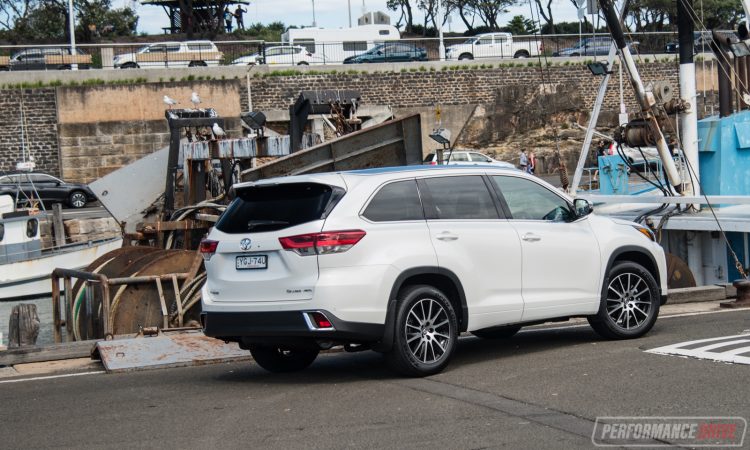 In terms of the new-for-2017 features and equipment, the mid-spec GXL gets an upgrade to the 8.0-inch touch-screen media interface shared with the Grande, along with a power tailgate. For the Grande, drivers get top-view camera technology and rear cross-traffic alert to boost overall safety. All variants continue with the five-star ANCAP safety rating.

Apart from these minor changes, the Kluger soldiers on in pretty much the same way it has been for the past few years. And it seems customers love it exactly how it is. Last year Toyota sold 11,829 of these, making it the third-best-selling vehicle in the class behind the Prado (14,730) and Subaru Outback (12,207).

It’s a perfect vehicle for families, with the sheer cabin size and space being perhaps the most attractive element. It’s huge in here. All three rows of seats offer decent headroom, while only the third row suffers a little in the legroom department. If those in the middle row are happy to slide the whole bench forward though this can help. And doing this doesn’t intrude on middle-row legroom as there is massive gap before the front seats. There’s also climate vents for all three rows, in the ceiling, with separate temperature control for the rear. 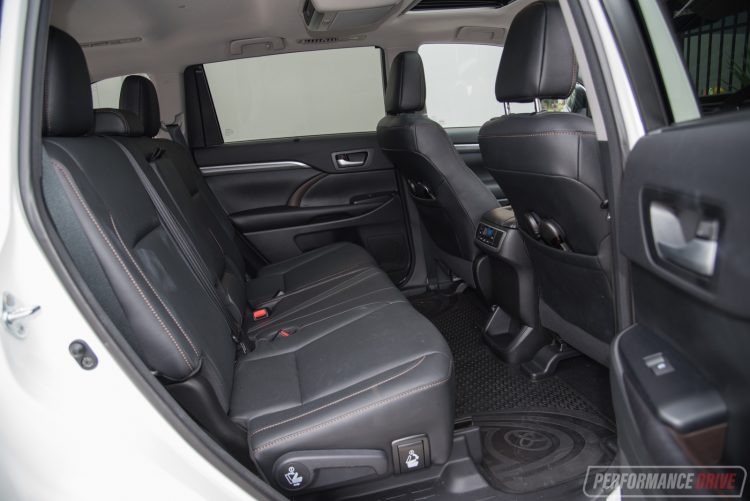 In the front there is a bit of an MPV-like position going on, with a well-forward and upright dash leaving loads of room. The centre console is one of the chunkiest you’ll ever see, yet it doesn’t seem out of proportion with the rest of the interior’s scale. We’re not a fan of the tacky sliding function of the console lid but it does open up a dual-level storage box which is big enough to swallow an entire handbag.

Technology and connectivity is at the class standards, although the comprehensive touch-screen interface doesn’t come with Apple CarPlay or Android Auto capability. It still offers smartphone pairing and there are some in-built apps such as Pandora, while sat-nav and a rear-view camera is standard. The quick jump-to buttons that surround the screen are a little off-putting in our opinion, as they don’t depress despite looking like they do. It is good they are there though as you can make easy selections while on the go. 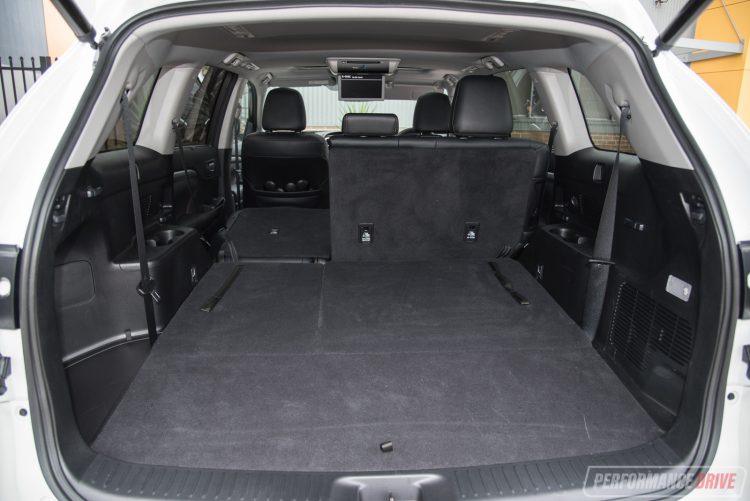 Cargo space is almost ridiculous. There’s 529 litres in five-seat configuration, or 195 litres with all three rows of seats up. If you need to cart something large, like a piano, you can fold both rear rows down for 1872 litres. The loading height isn’t a stretch as the Kluger is more of a crossover than an off-road SUV, but even so the height and width of the cargo opening is very generous.

In our opinion the best thing about the update is the new-look front end. The grille is now more sophisticated and pleasant on the eye, while the high-tech LED-infused headlights help it step into the next era of family haulers. Some freshly-designed, turbine-style two-tone alloy wheels on the Grande also add a premium touch.

Out on the road the Kluger remains a very easy vehicle to drive – not that we think any vehicle is difficult in the first place in this class. We suppose we should say that it’s not intimidating in any way, including judging the ample road stance. Lane placement is simple to maintain thanks to a relaxed steering ratio, and it doesn’t feel like a tank when parking thanks to the relatively thin pillars and door panels. However, looking diagonal through the A-pillar and side mirror can present a bit of an obstruction, particularly if you’re short or like to have the seat height set low.

Take the big crossover into the country and you’ll appreciate the simplicity of the drive even more. There are no hidden surprises that come through the steering, although lacking in excitement and engagement, and the body is behaved, resisting roll and tip relatively well for such a large vehicle – that weighs 2030kg in AWD Grande form. It’s not exactly the most nimble in the bends, like some of its more adventurous rivals such as the Mazda CX-9, but it gets the job done okay for when it’s designed for.

The new eight-speed auto is definitely a welcome addition. We’ve always loved the 2GR 3.5-litre V6, but the eight ratios now on offer certainly provide improved response when navigating around at low speeds in the city, while also providing quieter and smoother highway cruising at higher speeds. 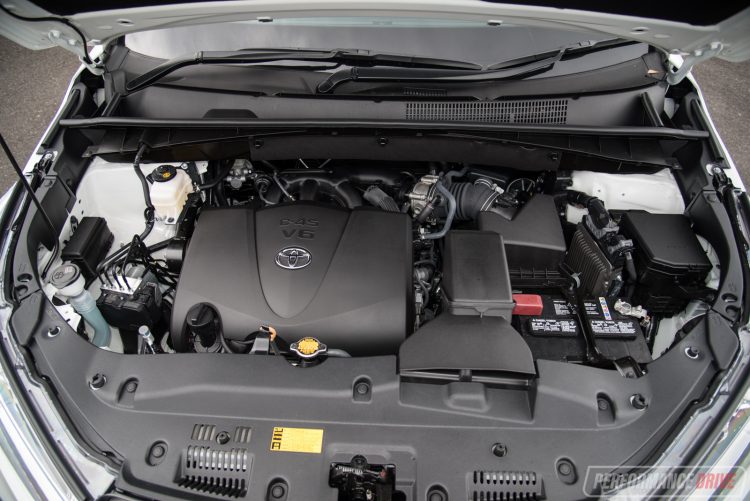 Also helping to smooth out the drive is the introduction of Toyota’s D-4S fuel injection system which pairs both direct and port injection. This technology was previously reserved for Lexus models using the same engine. For the Kluger it sees 17kW more power and 13Nm more torque (218Nm and 350Nm). Peak power is reached at a peakier 6600rpm (instead of 6200rpm), giving you some indication of its freer-revving nature, while max torque continues to be reached at 4700rpm.

In terms of the measurable performance, we clocked a best 0-100km/h time of 8.80 seconds. This is actually down on 8.11 we achieved in the less-powerful, six-speed version last year. We can’t really explain the difference, but in all other areas of acceleration the new model feels quicker. Overtaking performance at low and high speed is now easier thanks to the extra gears, with a quicker kick-down, and scooting around in the city also seems brisker as the gearbox is able to slot into a more suitable ratio, as opposed to holding in second or third with the long-legged six-speed.

Another noticeable benefit of the revised engine and eight-speed auto is a reduction in fuel consumption. In AWD Grande form the official average drops from 10.6L/100km to 9.5L/100km. In real-world conditions you can expect a similar improvement, with our tests seeing 11.5 in the previous model and now 10.5 on average in this new model. 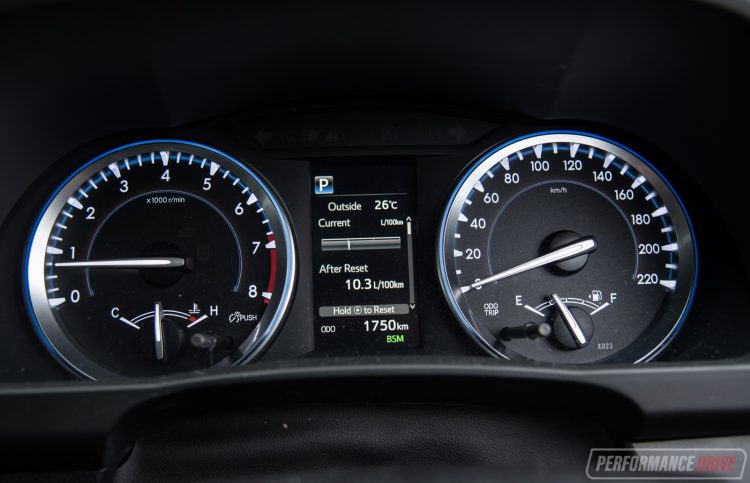 So, the 2017 Kluger isn’t about reinventing the seven-seat SUV segment as mentioned at the beginning, but it does noticeably improve what has been a popular and well-packaged proposition. It’s more refined to drive, more fuel efficient, and a little bit more intelligent and safer. All of this will be seen as a bonus to those who were already interested in the Kluger, and it might go some way to attracting new buyers who may have overlooked it in the past.