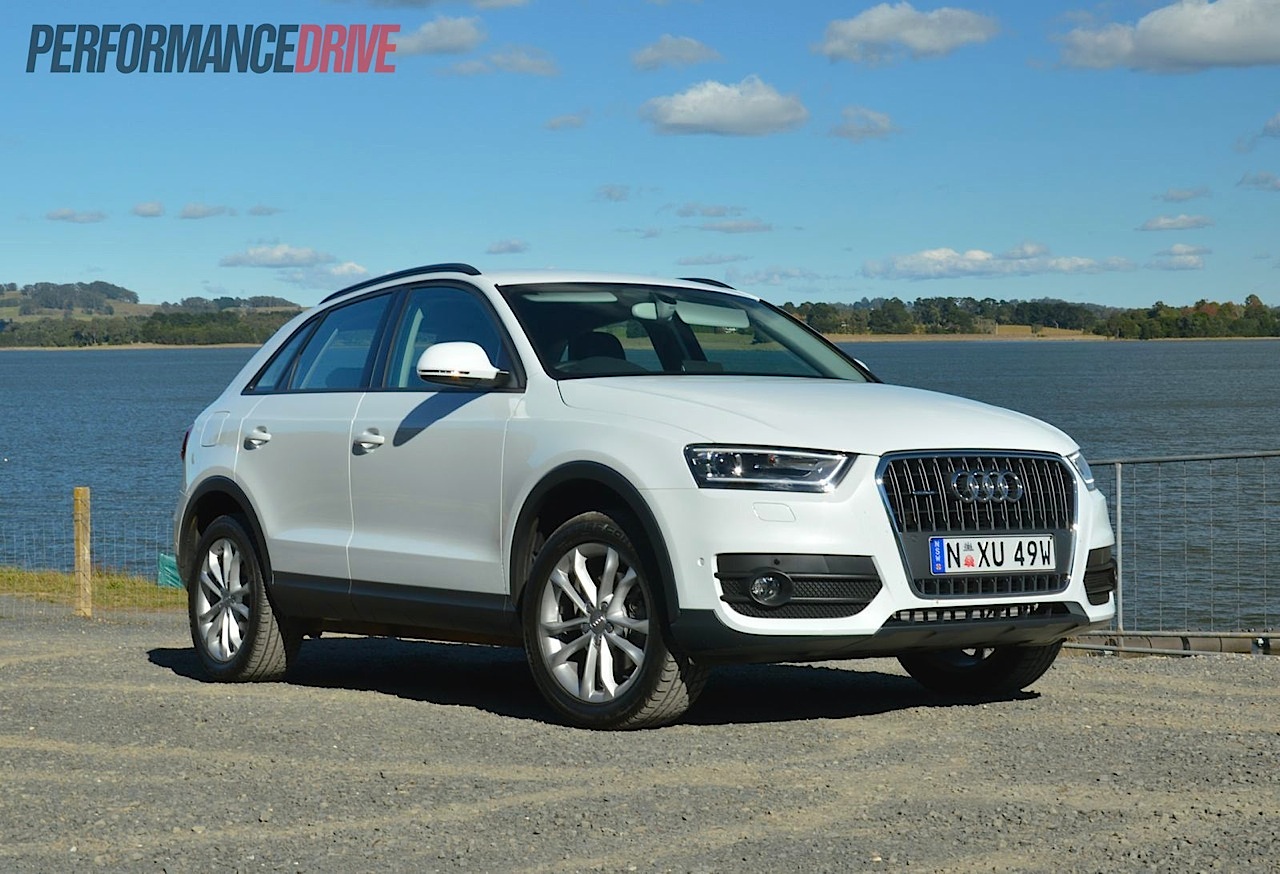 The 2013 Audi Q3 2.0 TFSI quattro is the Armani suit in the popular small-SUV market segment, offering smart modern styling, German technical expertise, and lots of class and prestige. It is literally the best-selling Audi in Australia at the moment too, so it must be good, right? 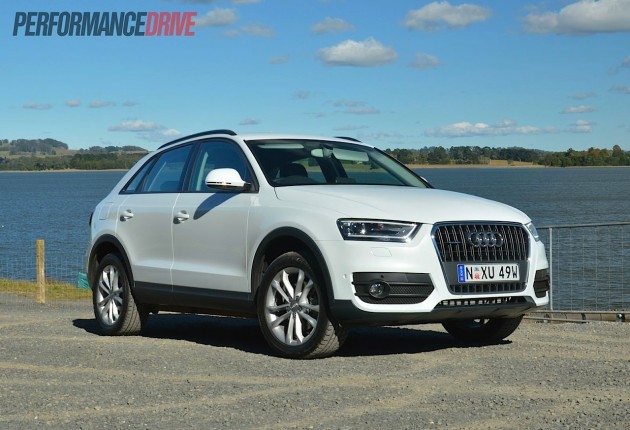 The entry-level variant, which comes with a 103kW TDI, is the only version not equipped with Audi’s quattro all-wheel drive system. 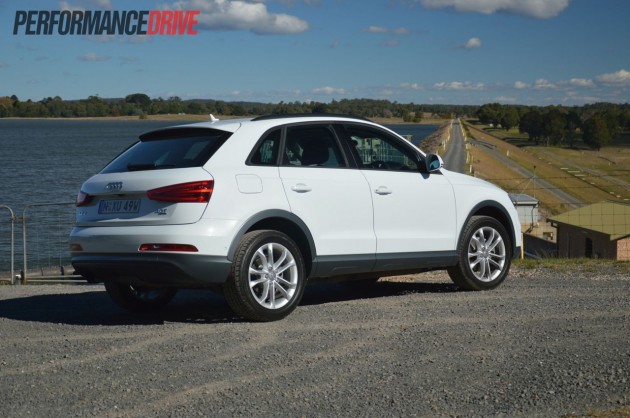 The version tested here is the top-spec automatic petrol. It comes with a 2.0-litre turbo four-cylinder engine producing 125kW and 280Nm, matched up to a seven-speed dual-clutch S tronic auto transmission with all-wheel drive. The only variant that sits higher in the range is the manual 155kW 2.0 TFSI.

Based on the Volkswagen Group PQ35 platform, which also underpins the VW Tiguan, the platform actually started life underneath the VW Mk5 Golf back in 2003. With this in mind, the Q3 is a soft-roader that’s focused more on on-road comfort and civility rather than off-road ruggedness.

There’s MacPherson struts up front and a four-link setup at the rear, while the steering system comprises of an electromechanical mechanism with speed-sensitive assistance.

Inside, all Q3 variants come with a quality leather upholstery, a user-friendly dual-zone climate control system, and a flip-up 6.5-inch multimedia interface. Of course, being a premium German vehicle, there are lots of options to choose from.

In this test vehicle’s case, there’s an MMI navigation plus infotainment system with a 7.0-inch screen. It’s a $3700 option. Its high-resolution 800 x 400 graphics are super clear and the interface is intuitive and easy to function thanks to a joystick-like control on the dash. For those that love enjoying modern technology, this will be an option worth ticking.

Options that you should also consider include a brilliant Bose audio system ($1700), park assist with automated steering ($1550), and Audi Drive Select modes with adaptive dampers ($2050).

With a reasonable starting price of $48,950 for this TFSI auto, the options can easily see that figure head very north, very quickly. In fact, if you tick enough option boxes you can see that original price tag loop around on itself, and some, adding $57,770 to the bill – gone are the days where you simply select a colour and then drive away in your new car.

Aside from the gadgets and nick-knacks, what’s the Q3 like to live with? Upon entry, you’ll notice the seat height is at that optimum level that has attracted so many consumers to the SUV segment in recent years. You don’t have to step up into the cabin, neither do you have to slouch down and fold yourself in like you’re doing Egyptian yoga.

Once you’re into the driver’s seat, you’ll find the driving position is good for a commanding, perched up, SUV-like view. From there, it’s simply a matter of relaxing and enjoying the drive.

The controls and the dash layout are both clean and free from overly complicated or intrusive buttons and controls. The legroom and headroom in the front is also accommodating, adding to the Q3’s user-friendly nature.

Rear seat passengers will see the ceiling sloping towards them due to the sleek swooping roofline, but it won’t be a problem for average height people. Taller rear passengers might want to take a comb along for the ride, as the headlining is likely to mess up any dos that might be important.

In the very back, the Q3 offers 460 litres of cargo space which can be expanded to 1365 litres when the rear seats are folded down. This compares well with its direct rivals – BMW X1 (420L/1350L) and MINI Countryman (350L/1170L) – and average amongst other non-direct contenders in the small SUV segment.

The overall cabin atmosphere is quintessentially Audi. There’s no mistaking it for a lower class vehicle, with flawless, unblemished build quality, and a mix of fine, pure materials throughout. 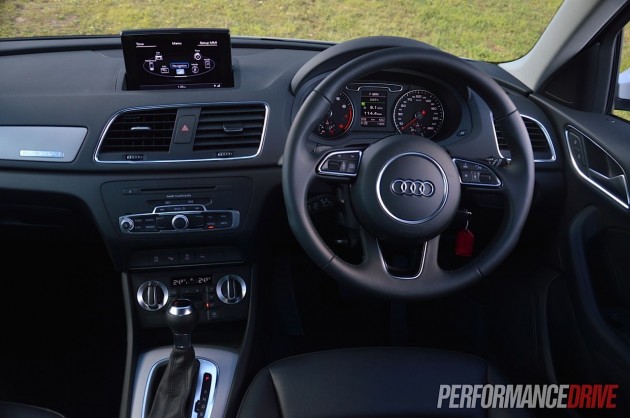 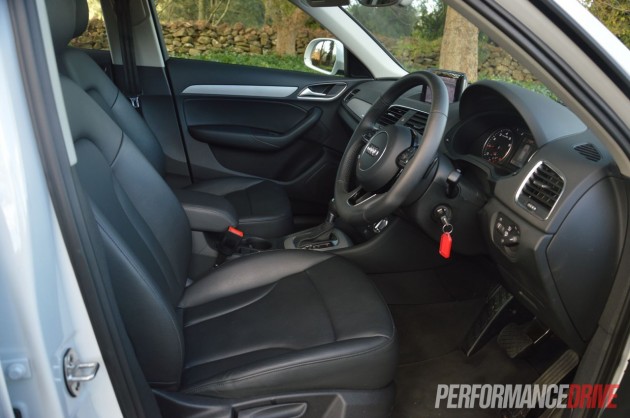 Although the engine doesn’t produce loads of power, it does provide a wide-spread of accessible power and torque – 125kW available between 4300-6200rpm – which makes the Q3 zippy and sprightly, whether you’re out on the open road or dashing through city traffic.

The S tronic transmission unites rhythmically with the engine as well, which makes for a relaxing and natural driving experience. In terms of performance, we timed 0-100km/h in a respectable 8.3 seconds.

Where things go a bit obtuse is with the steering and handling. We’re not sure if it is just our test vehicle, which has over 5000km on the clock, but the suspension is hardly a standout in this class. It’s clunky over Australian country roads, and rather ordinary going through dippers.

Obviously the Q3 is no sports car, even by modest SUV standards though, the Q3’s handling and composure is disappointing; it’s always disheartening to hear a vehicle’s suspension coping with bumps, and in the Q3’s case, it’s quite audible.

Although the Q3 was not engineered in Australia, or designed specifically for Australian conditions, some of the cheaper Japanese rivals do offer a more suitable and more compliant offering in this area in our opinion.

To add salt to the wound, the Q3 isn’t a natural at cornering. It lumbers and wobbles around if you try and shift the weight in even a slightly frisky manner, which, to us, is not in sync with Audi standards; a brand synonymous with premium quality.

As we’ve said before, you can easily gauge a vehicle’s fundamental dynamics by how soon the stability control intervenes. In the Q3, again, in this particular vehicle, it’s very easy to see the activation light on the dash flashing like a nightclub neon. If you suddenly need to change lanes for instance, you might as well have your dance shoes handy. It seems like the underpinnings are near their limits when dealing with anything above moderate pressure.

Chassis dynamics are not as ‘Germanic’ compared with the direct rivals, and even the Volkswagen Tiguan, strangely, behaves more securely on the road. This, we feel, is partly the steering’s fault too. The helm doesn’t communicate as strictly or enthusiastically as it should for a premium vehicle, and also tends to make the Q3 seem a little bit flimsy.

For most SUV buyers, these character traits might be excused. After all, it is a friendly approach to handling quality and driving character. Thanks to its 1555kg kerb weight, it feels lightweight and very manageable.

For us though, the sportier Audi Driver Select option with the adaptive dampers and firmer, more stable sports settings would be a no-brainer. 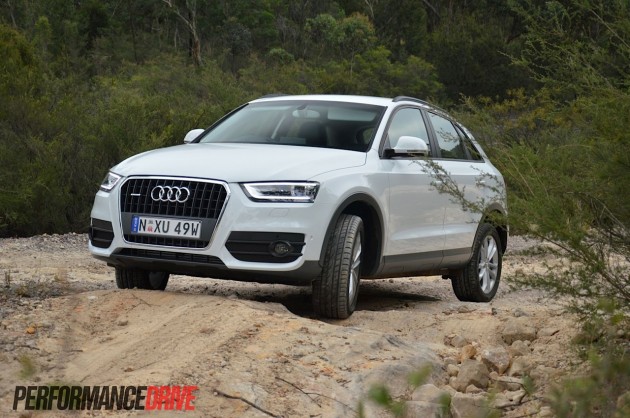 The ordinary ride and lack of suspension competence on road does start to make a bit of sense when you venture off road. While there’s class-average suspension travel and a car-like 170mm of ground clearance, the Q3 doesn’t mind a mild all-terrain adventure.

The quattro all-wheel drive system does an excellent job in providing engine torque to the wheels with the most traction, ensuring the vehicle is pulled up and over rough conditions.

For a weekend camping trip, the Q3 is perfect. The grey plastic underside panels give it that rugged look and help to camouflage dirt and debris that might flick up, and the soft suspension does well to soak up corrugated surfaces while leaving a comfortable ride. 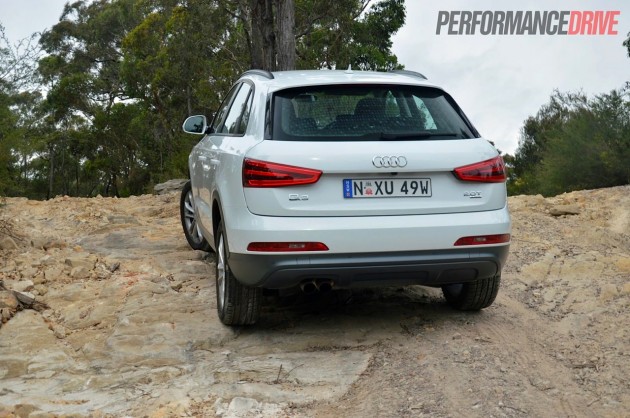 According to VFACTS, its direct rivals are the BMW X1 and the MINI Countryman. However, with a starting price of $44,800, the Q3 also has to contend with some very strong competition, such as the VW Tiguan, the top-spec Toyota RAV4, Mazda CX-5, Honda CR-V, and the Ford Kuga.

Where the Audi stands apart from the rest is with uber premium quality, fine attention to detail, and most of the style and luxuries you’d expect from anything with an Audi badge on it.

CONS:
– Flimsy handling feel with wobbly and clunky suspension, at least on this test vehicle
– Inferior steering communication
– Lots and lots of options to choose from, some of which should be standard 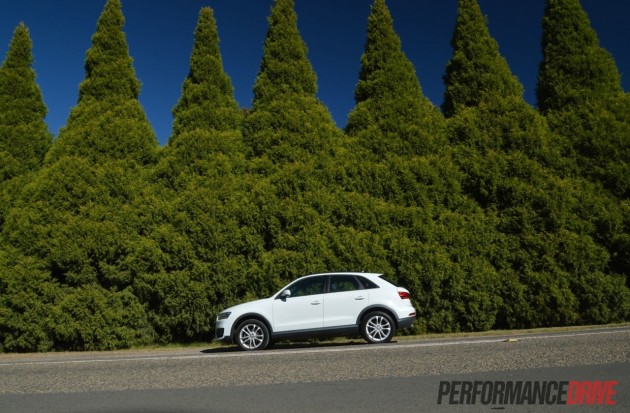