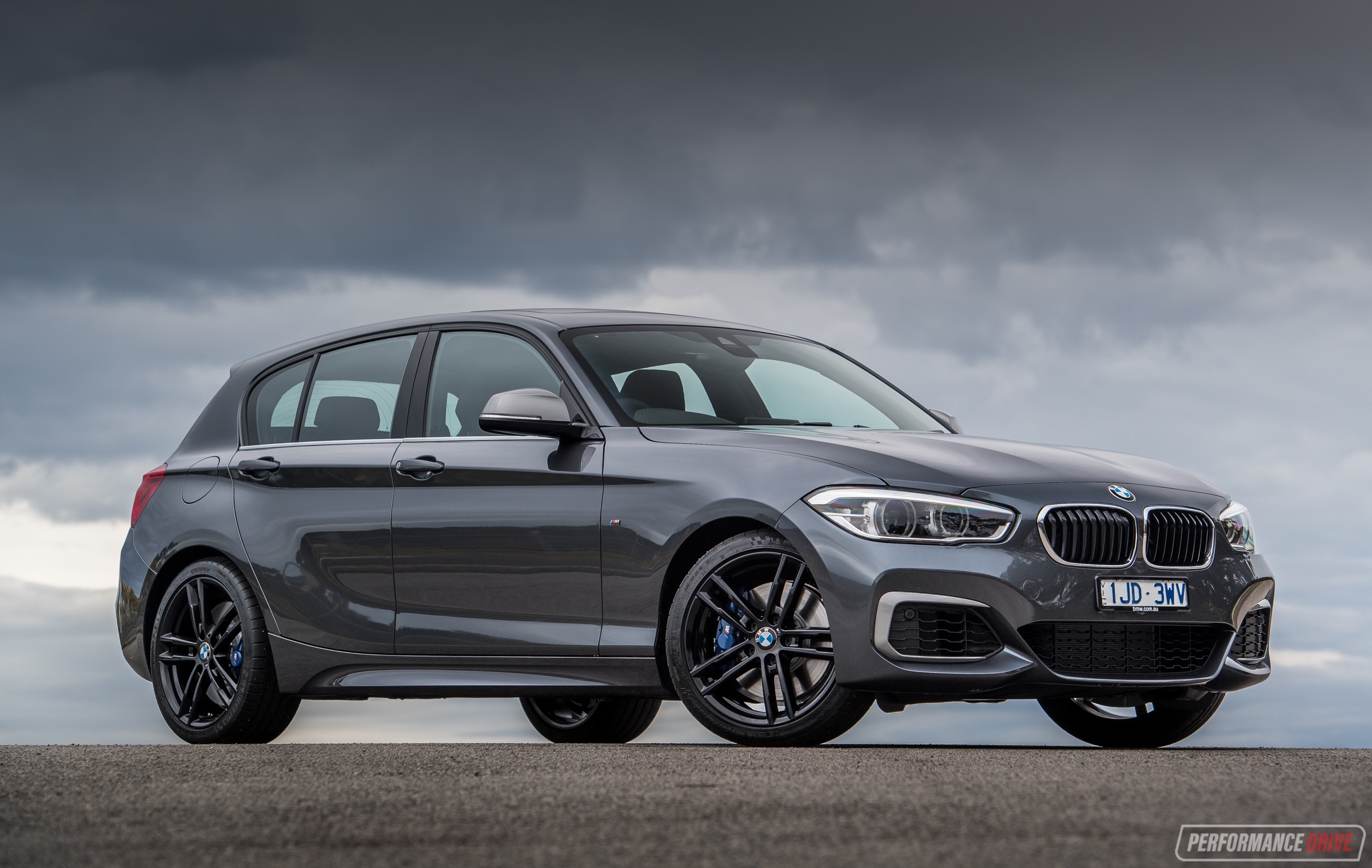 When BMW Australia announced the new pricing for the 2017 M140i LCI, we thought they were joking. For $59,990 (excluding on-roads) you can get yourself a rear-wheel drive hatch with sweet steering, top-of-the-range luxury and appointments, and a smooth-as-silk turbo inline six engine. If you can name another car that can beat this… actually, you won’t be able to name another car like it because there aren’t any. 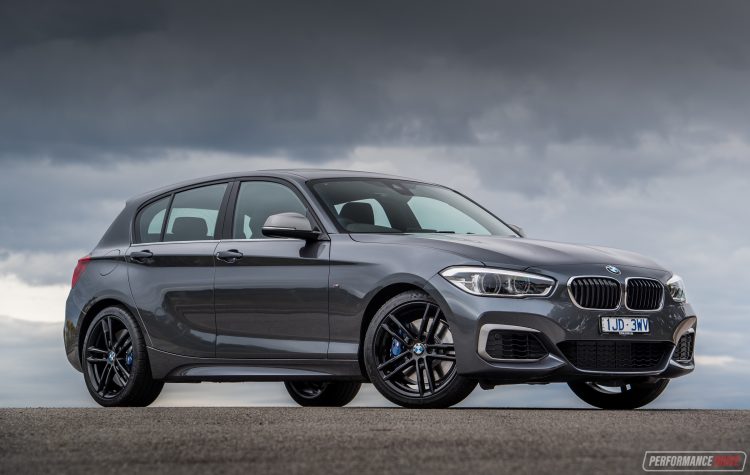 BMW is carrying on its traditional rear-wheel drive heritage with the current 1 Series. All models in the range, including the lower-grade four-cylinder variants, are rear-wheel drive. However, this will change with the next-generation model as it is expected to be based on BMW’s UKL1 platform, which currently underpins the X1 SUV, the 2 Series Active Tourer, and most of MINI’s range. The key factor of the newer platform is that it’s front-wheel drive and all-wheel drive only. In other words, this M140i is likely to be the last of its kind. Is it going out with a bang? Let’s find out.

We’re testing the facelifted model as part of a media launch event that took place in Tasmania this week – along with the M2 LCI as reviewed here. For the update, BMW has applied some nip and tuck treatment for the front end, with new-look headlights with a revised lower front bumper bar including reshaped corner clusters. LED headlights are now standard across the board, with adaptive LED units for this M140i.

BMW has also thrown in some fashionable black 18-inch alloy wheels wearing Michelin Pilot Super Sport tyres, which we can attest are extremely grippy even in saturated, almost icy conditions. The wheels help give the little 1 Series an aftermarket street presence, while the grey side mirrors continue to separate the M Performance variant from the rest. Behind the wheels are twin-piston blue-painted brakes at the front and single-piston at the rear. They don’t clamp eye-popping carbon ceramic discs or anything like that, as the M140i is not designed to be an outright performance model but more of an intermediate step between a regular variants and the full-cream M models. 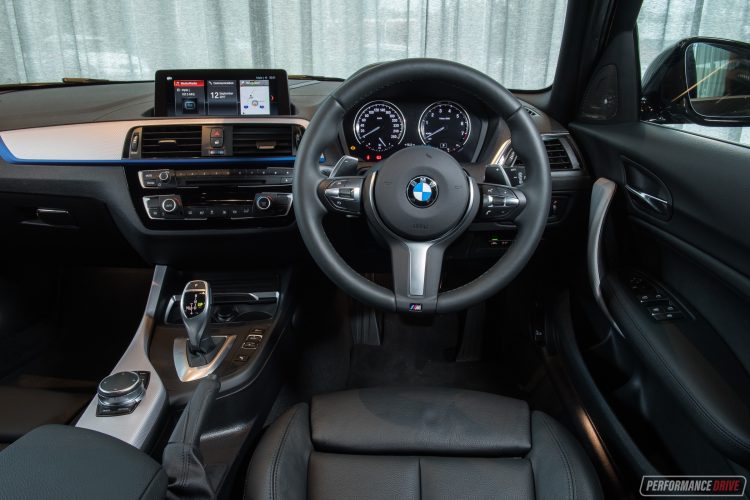 Sitting inside, buyers have the option of leather or a cool cloth trim. The cabin is a bit tight compared with some rivals, mainly in the back. Being rear-wheel drive does have its packaging drawbacks due to the need for a drive shaft tunnel and space in the floor pan for a rear differential and axles. Headroom is pretty good though, but shoulder space is quite limited. Legroom is also confined, especially for the unfortunate one stuck with the middle seat. And we’re talking specifically in comparison to rivals such as the Audi S3 and Mercedes-AMG A 45. The practical-focused VW Golf R is now also on its radar due to the lower price point of the 2018 model.

For the driver there’s an excellent seating position with good adjustability for the seat and steering column. Pedal placement is also perfect, with a wide enough brake pedal to allow left-foot braking without needing to twist your body. We love the three-spoke sports steering wheel too, which helps you feel really connected to the car. All major controls are within reach of the driver, eliminating the need to take your eyes off the road. The iDrive infotainment dial down on the centre console helps with this as well.

New for the facelift is BMW’s latest iDrive 6 software. We’ve always liked iDrive’s operation. It’s quite intuitive once you understand the right and left movement functions, and the quick jump-to menu buttons around the dial make life easier while on the go. For iDrive 6 the screen uses a tile-style layout for the on-board apps instead of the list of items in the previous version. The graphics are crisp and clear, with a mostly black background helping the menus stand out. We did have trouble with the sat-nav system during our test, but it was mainly down to human error; the split-screen configuration was confusing but we didn’t realise it was simply a case of hitting the ‘option’ button below the main dial. 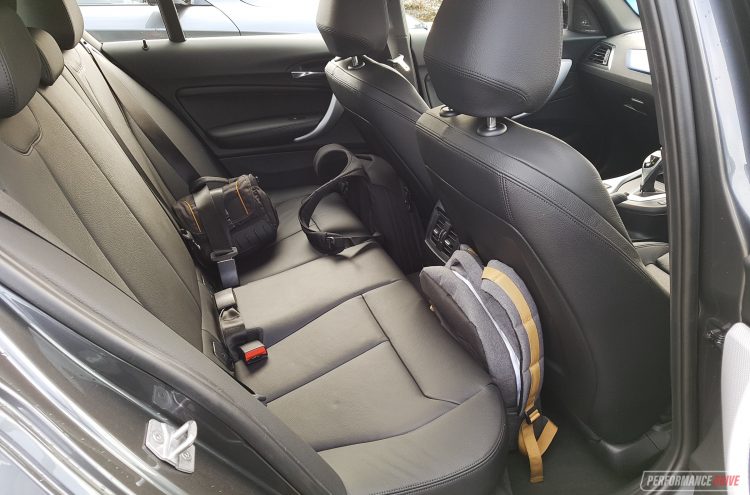 Onto the best part about the M140i; the drive. Out in the remote regions of Tasmania, the M140i is an engaging and surprisingly quick bit of gear. BMW claims 0-100km/h is over in just 4.6 seconds with the eight-speed auto. That’s proper sports car quick. And it stacks up against the all-wheel drive rivals very well, remembering it is rear-wheel drive. The official claim for the sprint in the $63,900 Audi S3 hatch is 4.8 seconds, 4.2 seconds in the $75,492 AMG A 45, and 4.8 seconds in the $55,490 Golf R (all auto). It feels every bit as quick as that on the road.

The best part about the performance though, in our opinion, is just how effortless and smooth speed is gathered. We can’t find any fault with the ZF-based eight-speed auto. In all modes it behaves perfectly, changing up and down gears automatically at the right times for any given situation, and in tempo with the drive mode selected. But that 3.0-litre inline six turbo engine is sublime. It is creamy smooth and it sounds delicious. Being an evolution of the N55 unit that was first introduced with ’35i’ models in 2009, the newer B58 gets the latest tune and the latest technical advances. As such, it produces 250kW of power at 5500rpm, and an impressive 500Nm available between 1520rpm and 4500rpm. The fact that it achieves 500Nm alone is a brilliant effort for a 3.0L, and that it’s available between such a wide rev range just makes it such a versatile unit.

Out on open road and in the mountains, it doesn’t really matter what gear you’re in, the engine will surge speed with gut-wrenching g-force. This means you can upshift early and build speed subtly, or you can flick it into Sport Plus mode and rev it right out to enjoy the splendid vocal range. Either way, building speed and maintaining momentum is very easy. Almost too easy. Chasing the M2 at times during the launch event, we felt the M140i could almost keep up in some conditions. The M2 has a little bit more power but the suspension and wider tyres help it excel in certain areas. 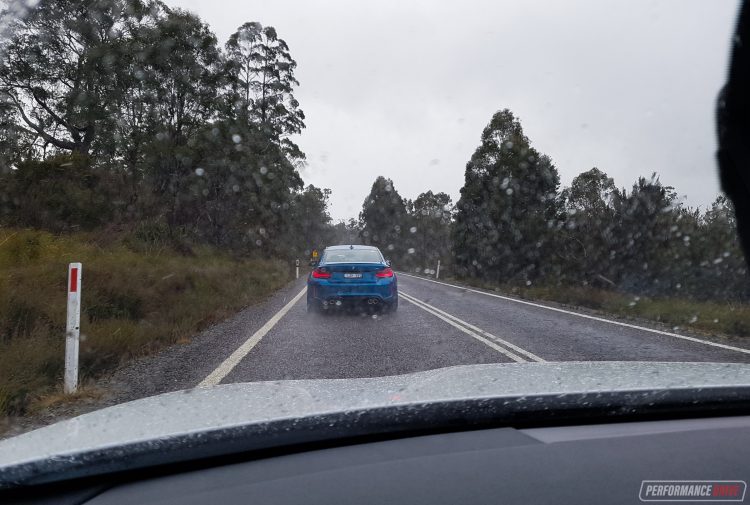 In terms of handling, the M140i does well to hang onto the road around long sweeping bends, despite the short wheelbase and small footprint working against it. It is a better driver’s car in nimbler road sections, such as up or down a very twisty mountain road. Where it is let down is with the suspension and road manners. Being very firm the car feels like it wants to eject you out of every bump, abruptly, due to what feels like a very tense rebound setting. It never does, though. And that’s the strange part. It’s actually quite planted, even smashing over undulating surfaces at high speed and through corners without becoming upset or unsettled. But it’s the feeling that it might bump you out is what tarnishes your overall confidence. Interestingly, the ride and composure is much better in the M240i coupe version, and it shares the same 2690mm wheelbase. The M140i’s is 130mm shorter, length-wise, which might have something to do with it.

Being rear-wheel drive you can dart into corners with lots of speed and shift the weight to a neutral standing with a little throttle input, or get further on the gas to provoke oversteer. BMW says the M140i comes with an electronic locking differential as standard, however, with the stability control switched completely off we did experience some inside wheel wheelspin. A proper mechanical limited-slip differential would be preferred by more serious driving (and drifting) enthusiasts, and it could make the drive more predictable in our opinion. Getting the power down during heated driving isn’t an issue in the dry, but it can axle-hop and wheelspin in the wet pretty easily. This is where all-wheel drive rivals push ahead. 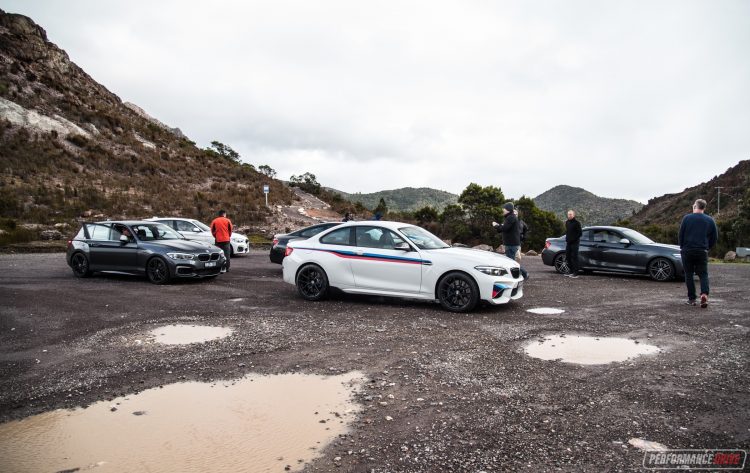 There’s no doubt the engagement level in the M140i is very high. This is a super exciting car to drive. And when you remember this is a practical hatchback, it becomes something of a sleeper; unassumingly quick and capable. It will be sad if/when BMW eventually replaces this configuration with a front-drive-based layout. With improved packaged though we can look forward to more interior space, and with xDrive all-wheel drive on the cards it might actually end up being a quicker car. For now, we say get into the M140i and enjoy a straight six, rear-wheel drive hot hatch while it lasts. And with that new price, there’s no better time to take the plunge.