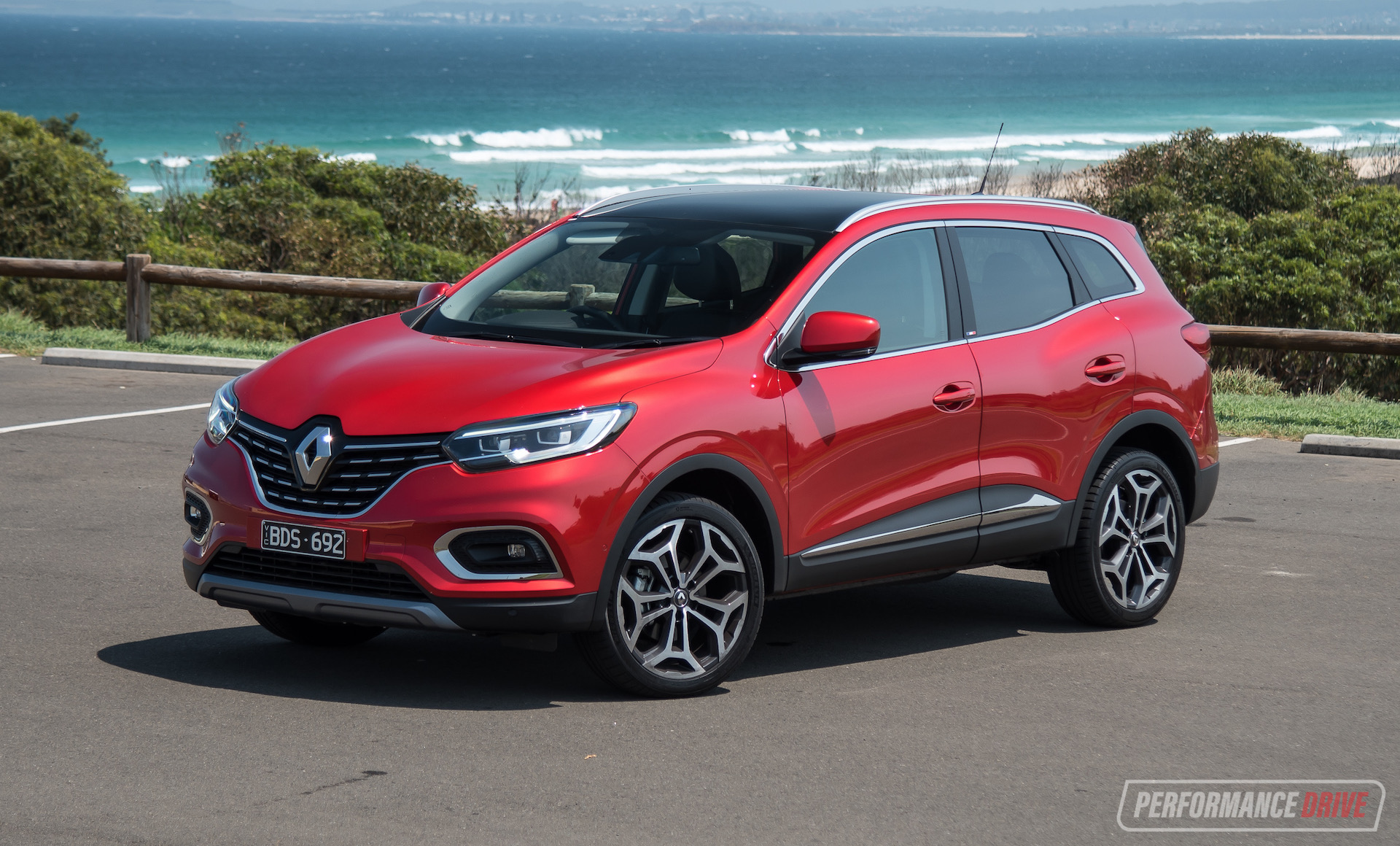 Entering into one of the fastest-growing segments at the moment, the Renault Kadjar has its target set on the likes of the Mitsubishi ASX, Honda HR-V, and the new Kia Seltos. Does it have what it takes to bring down some of these favourites? That’s what we’re here to see. 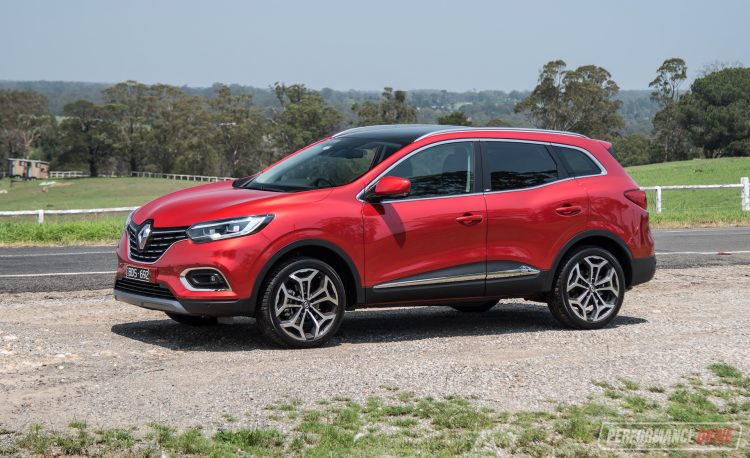 Unlike the Koleos big brother which is built by Renault-Samsung in South Korea, the Kadjar is a proper Renault, built in France. However, it does share its platform with the Nissan Qashqai, under the Renault-Nissan-Mitsubishi Alliance.

But, rather interestingly (and fortunately, in our opinion), the Kadjar is powered by a unique 1.3-litre turbo-petrol engine. It’s a peppy one, too, producing 117kW and 260Nm. The latter figure is particularly appealing for this class.

In Australia there are three main variants, spanning from the Life, Zen, to the flagship Intens. All come with a seven-speed dual-clutch auto transmission with front-wheel drive. For this top Intens model prices start from $37,990. You can jump into the base model, with the same engine, from $29,990 (all excluding on-road costs). 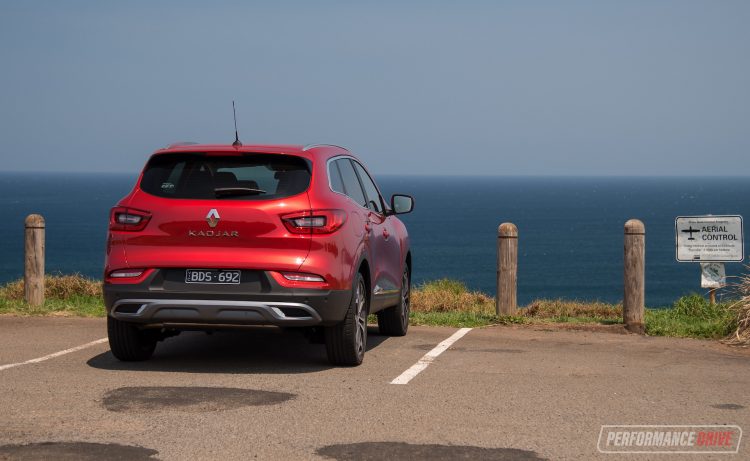 You’d have to be a pretty avid Nissan fan (or Renault fan for that matter) to pick up any design similarities with the Qashqai. Renault has applied its own body, including all panels and trimmings. The Intens comes with ‘Pure Vision’ LED headlights with auto high-beam, but all feature the latest C-shaped LED daytime running lights and LED indictors.

Towards the back, the nicely curving rear wheel arches appear similar to the Qashqai, but there is no crease line here and the last side window is larger on the Kadjar. The roofline is also more horizontal and wagon-like. This gives away some clues to its spacious and practical cabin. We like the detailed LED taillights, and the bulbous contours which remind us of the muscly little Clio hatchback. 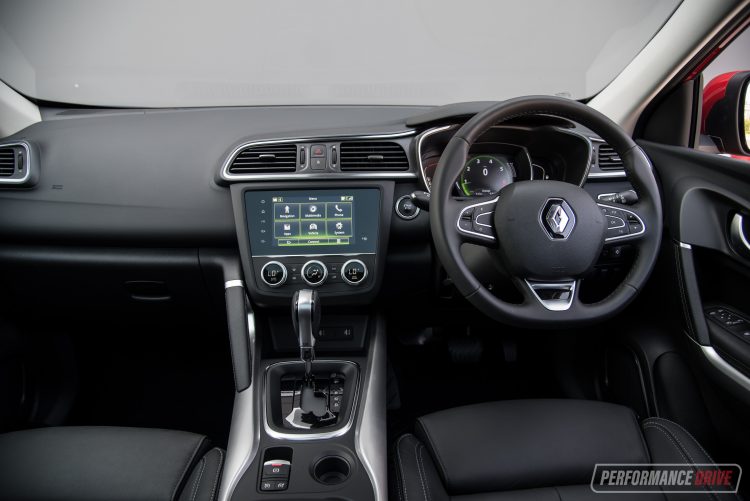 The interior of the Kadjar Intens is very impressive in that it is large and inviting, and there are lots of premium details in here. It’s also packed with features. Big heated seats cosset the front passengers, and there is plenty of adjustment for the driver to find that ideal position (includes tilt and reach steering column). Visibility is also great thanks to a relatively flat and forward-pressed dash, and well-positioned A-pillars.

Keeping everyone entertained is a 7.0-inch ‘R-LINK 2’ touch-screen multi-media system. It features Android Auto and Apple CarPlay connectivity, and in the Intens it’s paired up to a seven-speaker Bose sound system. Although the audio quality is brilliant, we’re afraid we can’t say the same about the touch-screen’s operation. To put it bluntly, there are just far too much button selections needed to go from one function to another. It’s distracting. 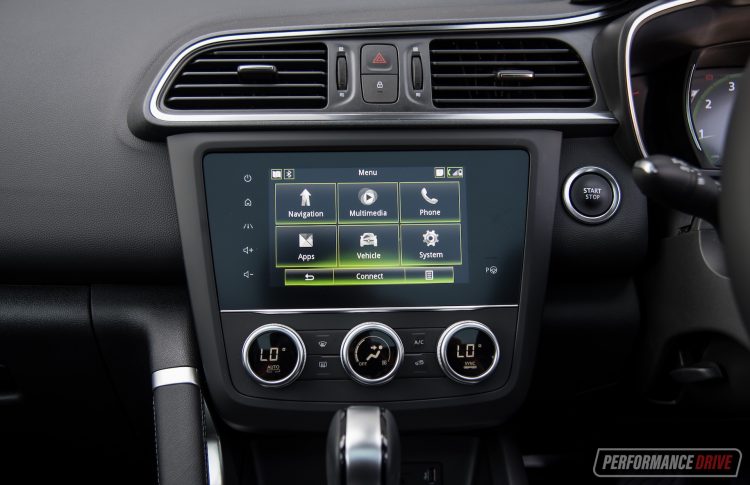 It’s cool that it presents lots of settings though, like changeable background colours and themes that are entwined with the digital screen for the instrument cluster. We also like the climate control knobs, with their little windows that show the temp control. They feel nice to press as well.

In the back you’ve got a good-size, moderately-contoured bench seat. Legroom and headroom are near the top of the class, if not at the top. The floor is almost completely flat so the middle seat passenger isn’t much of a sacrifice, and there are two USB ports and a 12V socket to keep everyone’s devices charged. Despite being a relatively small vehicle, adjustable climate vents are located in the back of the centre console, which is a bonus. 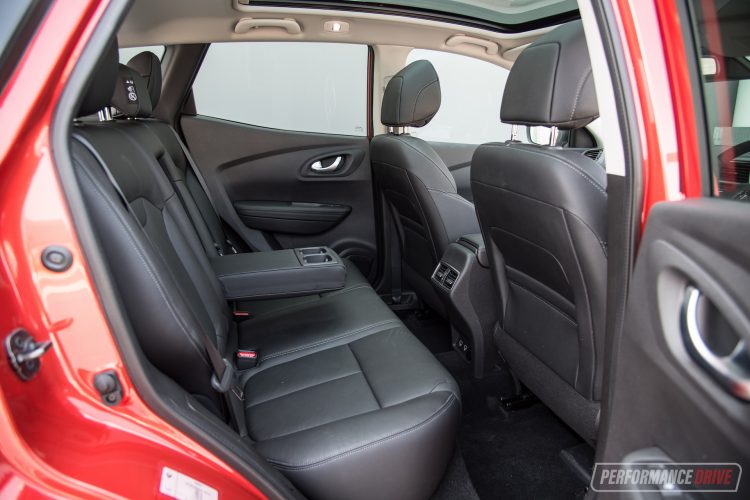 Boot space measures in at a very respectable 408 litres. You’ve got an adjustable floor height thanks to two pull-out boards, and you can fold the rear seats down from pull-tabs in the wall to open up an impressive 1478L of cargo-carrying volume. This compares well to many rivals. 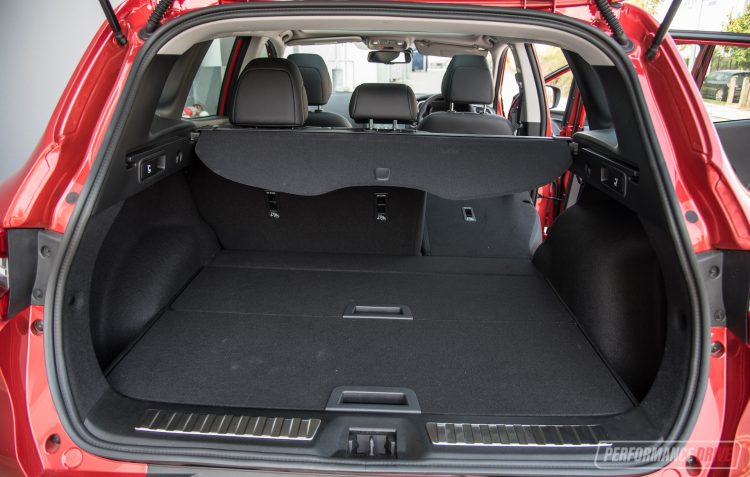 The first thing you’ll notice about the drive experience of the Kadjar is the ride comfort. It is very soft and cushy, easily absorbing our shoddy Aussie backroads and country thoroughfares. For the Intens there is a rather large set of alloy wheels, measuring 19 inches. We think these are actually too big and not quite perfectly balanced with the ride setting. Nonetheless, the comfort is still outstanding except over sharp and very small road protrusions.

At the other end of the spectrum, that soft ride does mean the body control is relaxed. It’s almost to the point where you might describe it as spongey and even flimsy. However, when you do push it, it’s good to know the chassis is reasonably capable of managing your demands. Regardless of how out-of-touch they might be with this style of vehicle.

We notice the big rims are wrapped in Michelin Pilot Sport 4 tyres. These are pretty serious on the sporty driving Richter scale, but they aren’t suited to off-road driving. This all means it will hang on surprisingly well when pushed hard around corners, even bumpy corners. But, you might like to wear some elbow pads as the bodyroll can make it feel like you’re riding on a pogo stick. 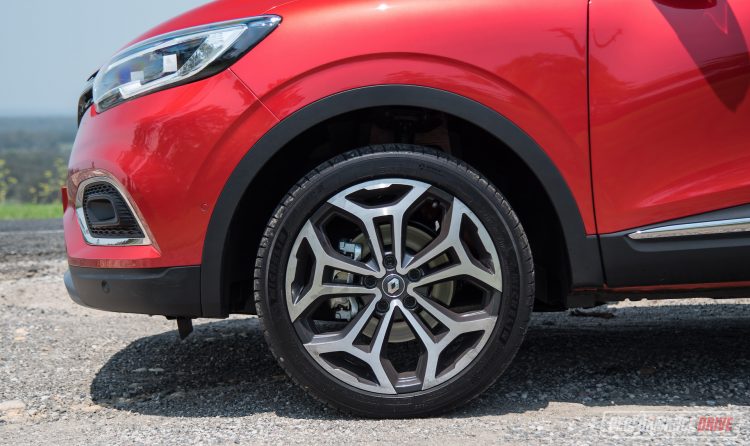 This 1.3-litre turbo-petrol four-cylinder engine is a gem. It’s certainly got more character than most of the whiny naturally aspirated units found in this segment. And that includes the Kadjar’s cousin, the Nissan Qashqai. And better yet the engine isn’t matched to a boring CVT auto. Instead, you get a seven-speed dual-clutch auto. What you’ll appreciate the most though is the powertrain’s torque. 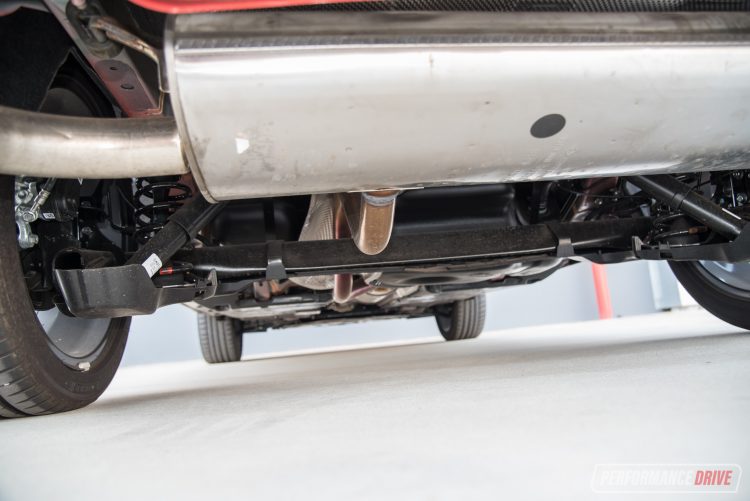 You only need 1750rpm to experience and enjoy the full 260Nm. For comparison, the Qashqai’s 2.0L non-turbo offers only 200Nm and only at an exhausting 4400rpm. The Mitsubishi ASX’s 2.4L petrol doesn’t fair much better, producing 222Nm at 4100rpm. It simply means you don’t need to press the throttle very deeply in this to get things moving.

It really pulls up hills with no trouble at all. Even with heavy load on board, the Kadjar whizzes up and doesn’t make a big deal about it. We’re not sure if a dual-clutch auto is the right choice for this style of vehicle. It’s clearly been engineered to offer smooth and relaxed shifts, and the initial take-off can be quite smooth, if a little delayed, depending on your urgency. 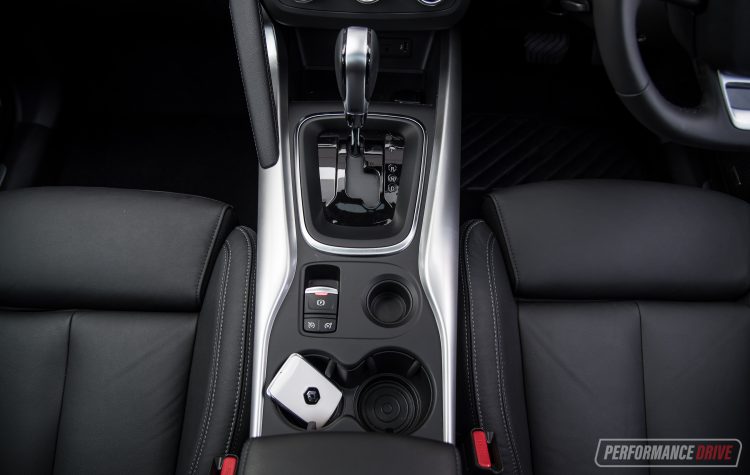 However, we think the clutch take-up action between medium and full throttle is too relaxed. It results in a very elastic and sling-shot-style of departure. We also think the 0-100km/h run, even though that’s not really important here, would be quite a bit quicker with a regular torque convertor automatic. Our best 0-100km/h was 10.14 seconds, which isn’t too bad for this class.

There’s a nice little exhaust dump and thud during soft upshifts. And in manual mode the shifts are super-fast, as per any dual-clutch arrangement. With thanks to this transmission technology, as well as the engine’s credibility and petiteness, the Kadjar is very fuel efficient in the real world. We recorded an average of just 6.6L/100km, and we weren’t exactly plodding around. The official average is 6.3L/100km.

This is a great option for those in the market for a spacious and unique small SUV. The 1.3 turbo is also worth its own weight in gold. It provides plenty of shove and a bit of fun when needed and it is effortless in nature. It’s also very fuel efficient. Cabin practicality and features make it a great value proposition, too. And Renault Australia offers a five-year/unlimited kilometre warranty.

So, to answer the original question. Yes, it does have what it takes to bring down some of the favourites in this class. Areas that might require consideration; the arduous touch-screen can become an annoyingly repetitive task, and a distracting one, and the comfort-focused suspension might be too soft and bouncy for some. Other than that, this is a sound option for buyers.

CONS:
– Dual-clutch auto calibration; rolls back on hills, clutch take up seems too relaxed
– No adaptive cruise control even on top Intens
– Touch-screen is painfully tiresome and distracting; far too many presses required