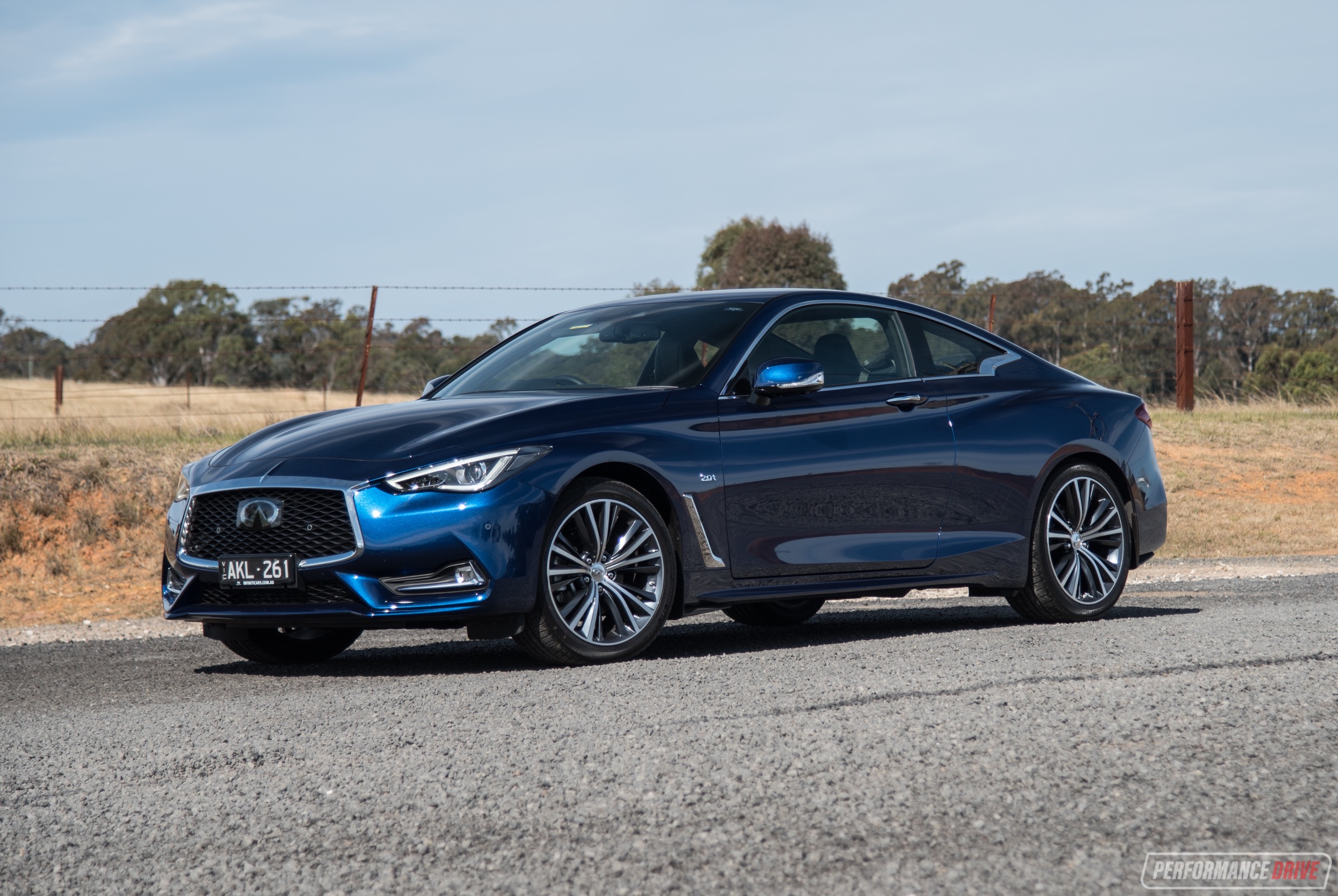 Purchasing a new car for a large section of society is a heart-driven decision rather than a pragmatic one, which is good news for the 2017 Infiniti Q60 GT, since it is extremely easy on the eye. Billed as an alternative to the Audi A5, BMW 4 Series, Lexus RC, and Mercedes-Benz C-Class, Infiniti’s newcomer has an arguably more seductive and concept-like form, inspired by the slinky Emerg-e concept of 2012. 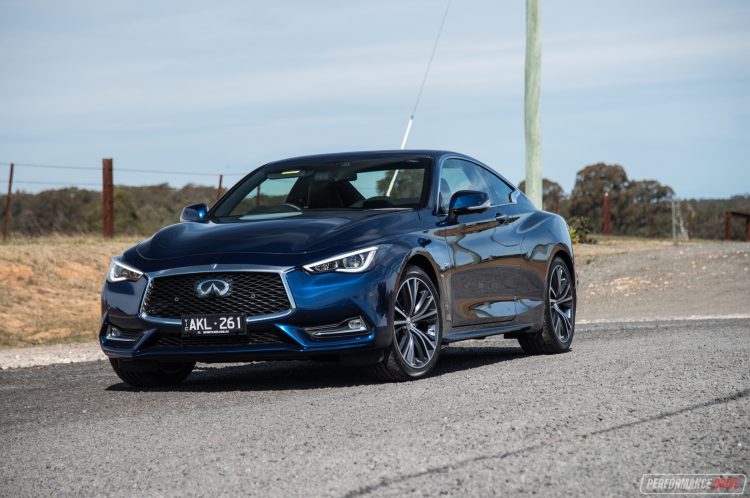 The Q60 is styled more distinctly from its Q50 sedan counterpart than its stodgier rivals can manage, with pinched beltlines, curves and reverse tapering on the side window – all in just the right places. While all rivals also have their own form of sex appeal, they don’t stray too far from their formula of premium orthodoxy.

But, while it might look the part, monthly sales are so far only in single digits, trailling all rivals. Read on to find out why we believe it deserves to be doing much better than this. 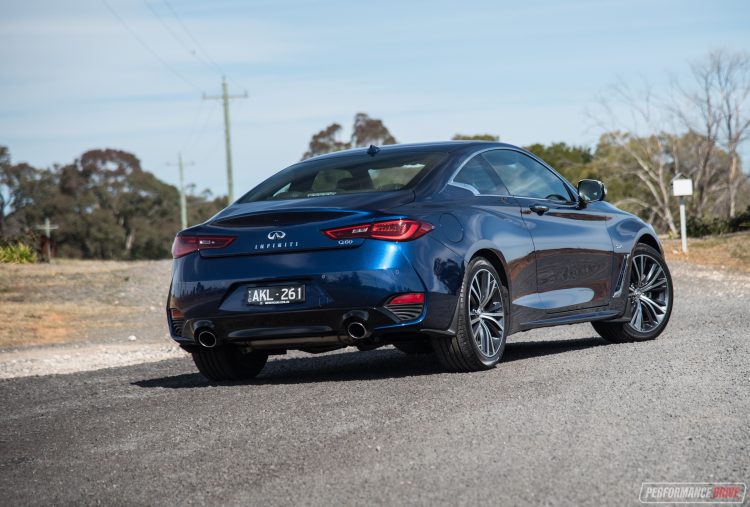 We’ve already saturated the Q60’s styling with praise but here’s the important data. The 4685mm long, 1850mm wide, 1395mm tall coupe sits on a 2850mm wheelbase and the sleek aesthetic means you must be mindful of your head as you enter. Boot space is 341L, which should be adequate for a set of golf clubs or two. Back seat accomodation is perfectly acceptable for this type of vehicle, with headroom maybe a bit tight for those over six foot, but bearing in mind its sporting credentials, it does quite well. Front seat space is comfortable and relaxing, with plenty of room for your gadgets.

The $62,900 GT on test here utilises a 155kW/350Nm 2.0-litre turbo four-cylinder and seven-speed automatic borrowed from Mercedes-Benz. In fact, you can have the same engine in the pricier Mercedes-Benz C 250, but with two extra gear ratios. This is sent through a rear-wheel drive setup.

Inside, the interior design is premium, sporty and cocooning in a way a luxury personal coupe ought to be. The overall presentation and layout isn’t as intuitive and special as the latest efforts from Mercedes-Benz or Audi, for example, but material quality is definitely up to par throughout. The three-spoke tiller adjusts electronically, as do the seats in all directions including bolsters. 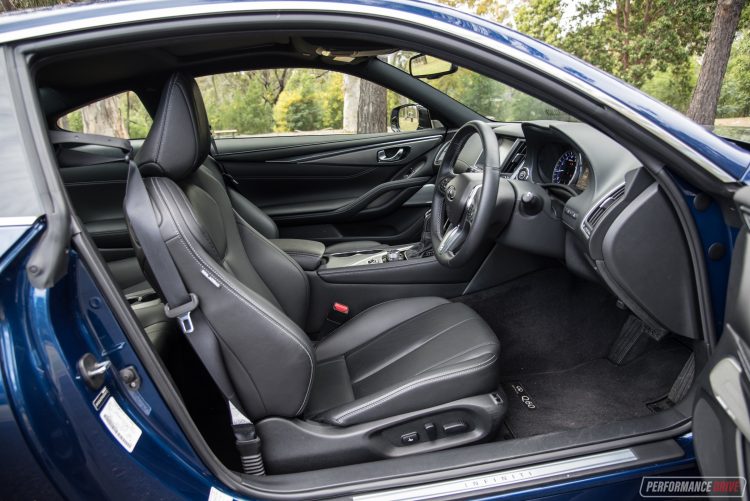 Gnurled metallic spears on the doors and trim inserts running from the infotainment system to the console are impressive to behold and touch. The crux of the Q60’s interior layout is two colour screens, with the lowest one controlling primary functions, and the top one (a carryover from previous generation Infinitis) for sat-nav and audio display. The lower screen is a more modern Intel-powered item, while the top lacks in the graphics department.

Thankfully, there are climate switches and audio knobs for those not wishing to use the touch-screen and rotary controller near the gear selector, providing three different methods of operating major controls (four if you include steering wheel switches). While not the most clean and modern, it is user-friendly. The Bose audio system challenges even the best Mark Levinson systems for ear-gasmic sounds, whatever genre of music you enjoy and is a very welcome inclusion for an entry-level car. 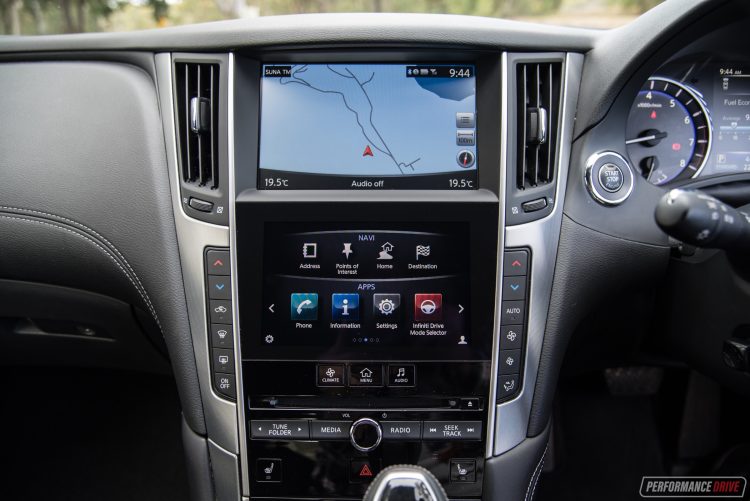 Despite using the same FM rear-drive chassis as the sporting 370Z, the Q60’s biggest talking point is its “Rack Electronic Power Steering” which, like a video game controller, sends an electronic signal to turn the front wheels and gives force feedback. Widely criticised in its first-generation when it debuted on the Q50, as the Direct Adaptive Steering setup, the newer system has been revised for a greater sense of connection.

It still takes some familiarity, particularly when parking against gutters and adapting to its disconcerting feel around corners. But while it could never have the intimate feeling of a Porsche or BMW, its unique character is a novelty that you quickly learn to enjoy, and it is very smooth and helps support the luxury character of the car. Also, being able to alter the steering effort and weight on the fly is a definite bonus.

It combines with a stable, solid and well-balanced chassis to provide high grip levels and definite rear-drive traits, with a hint of oversteer when provoked. Road-holding grip is very high, making it feel sure-footed and confident in almost all conditions.

The Mercedes-Benz-sourced powertrain is silky smooth for a four-banger, with hushed but pleasant acoustics and the ability to rev beyond 7000rpm. It combines superbly with the seven-speed automatic that faithfully holds your shifts in manual mode, and is super-intuitive in regular Drive mode. While average economy of 7.7L/100km is promised, a real world effort of 9.0 is commendable, especially given the Q60’s 1698kg kerb weight. 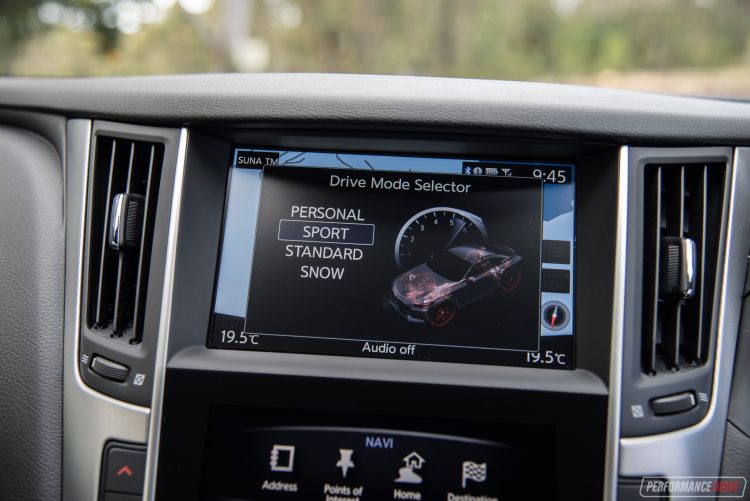 The Q60 is achingly beautiful to look at. It’s the type of car you would park near the restaurant window every time you had lunch so you could stare at it, or near the bedroom window as a marital aid. In many ways, this competence permeates and it cuts its own identity among its peers in a way rivals can’t manage. That a twin-turbo, 298kW Red Sport V6 is available for under $90,000 while equivalent competitors are well over $100K is another very compelling reason to consider the Q60.

With sales and brand recognition a mere shadow of what they are in North America and other regions, we hope Nissan’s luxury division doesn’t pack up and leave like Opel did, who had similarly low sales numbers here. We still have Infiniti’s killer variable compression technology on its way, which will give the brand a major real-world efficiency edge – coming next year. As it stands, we think the Q60 is the jewel of Infiniti’s current lineup.

CONS:
– Steer-by-wire not to all tastes
– Lack of brand recognition
– No digital speedo
– No paddle shifters
– Foot-operated park brake
– Interior a mix of old and new technology