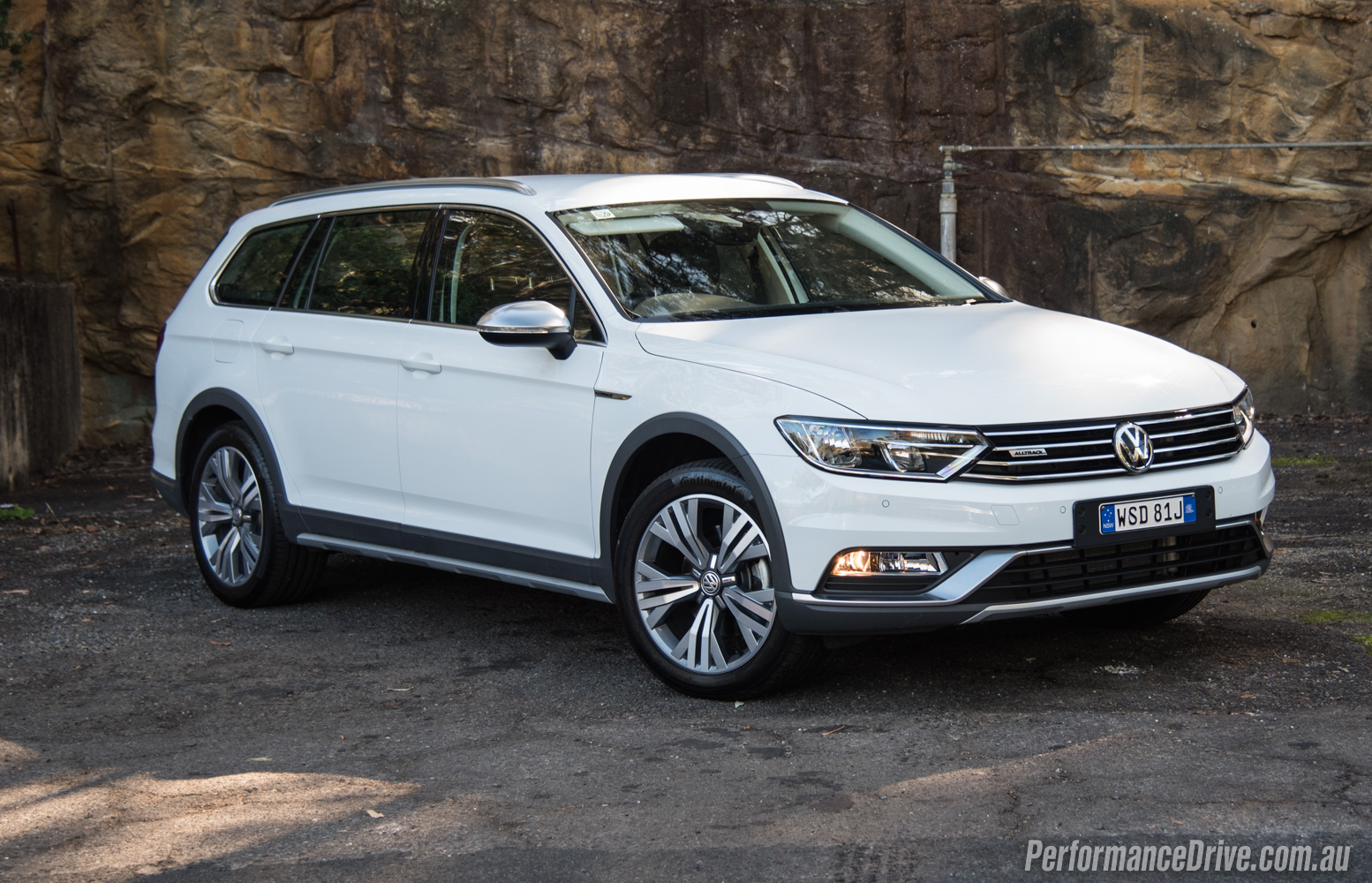 Although Volkswagen has been getting some bad press lately, that certainly isn’t due to bad product. In fact, as we can see with the 2016 Passat Alltrack, VW are kicking goals when it comes to sophisticated, well-presented cars. 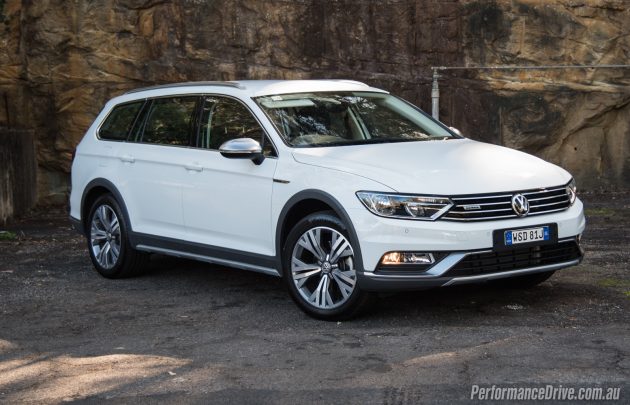 Volkswagen has underpinned the latest Passat with the same MQB structure as the Mk7 Golf, rather than an Audi; the first such departure in the nameplate’s 43-year history. Although a cost-containing exercise, the high standard expected from the brand must be maintained. Especially in these turbulent times, the marque can ill-afford to cut any corners.

The Alltrack variant, which debuted with the last-gen Passat, is a pseudo-off-road version of the wagon in the vein of Subaru’s pioneering Outback. It starts at $49,290, as tested, and in addition to the Outback and Volvo V60 Cross Country, it faces some in-house rivalry from the Skoda Octavia Scout and Audi A4 Allroad.

The Skoda sits on the same MQB platform, while the Audi is only $3710 dearer but is at the end of its life cycle. So, does the VW Alltrack make sense? 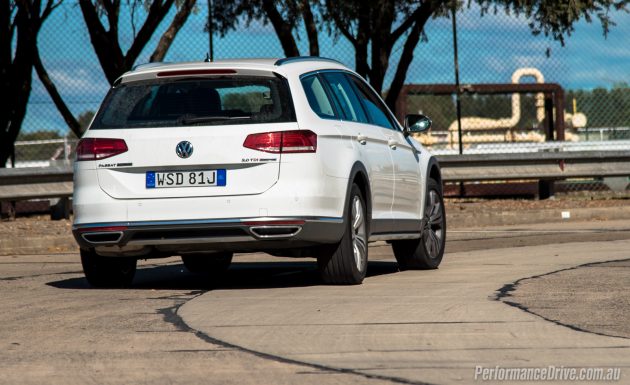 Visually, the Passat Alltrack differs from its low-riding brethren thanks to cladding around the lower edge of the body, plus chrome sill inserts. Lovely 18-inch ‘Kalamata’ alloy wheels look very ornate, and not something you would want to risk scratching on a rocky trail.

There’s also 27mm of extra ride height – at 174mm – which isn’t enough for serious off-roading but it’s all about the aesthetic. It’s worth nothing the Octavia Scout sits at 171mm, while the Audi A4 Allroad is 180mm. All of these trail the Subaru Outback’s 213mm – which is right up there with a proper SUV. Ultimately though, a station wagon has more front and rear overhang than your typical SUV.

Inside, you get the same neat and expensive-looking interior as the latest Passat. You can tick the $3500 Luxury Package option box, which includes a panoramic sunroof. The package also includes LED daytime running lights, automatic parking and headlight washers. The switchgear is laid out in a logical and neat fashion with the overall impression that this car is more expensive than the price suggests.

No corners have been cut, with even the door bins lined with carpet-felt material. “Ergocomfort” seats with pleated leather are delicious to behold, but lack lower back support compared to some rivals. A comfortable driving position is easy to come by. The front edge of the cushion can extend out for extra knee support too. It’s a nice touch but not as good as the ‘Lay-Z-boy’ style in some BMWs. 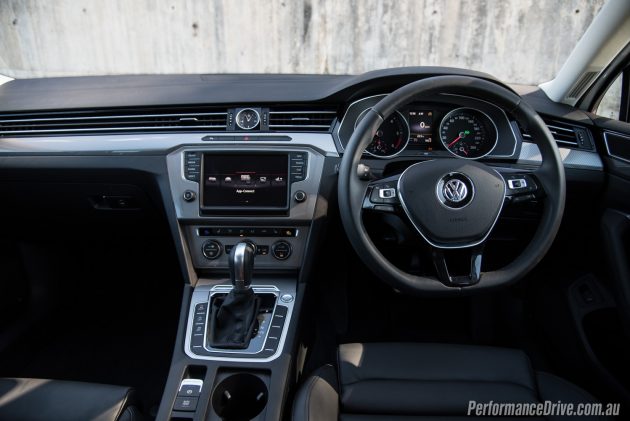 What amazes are the infortainment system and central display panel in the instrument cluster. The absolute breadth of information available is staggering. The 8.0-inch touch-screen features satellite navigation, a motion sensor, Apple Car Play and Android Auto, comprehensive vehicle data including g-sensor and live kilowatt output. The Tri-Zone climate control is outstanding and has its own display on the screen in the back too.

Accommodation is excellent, with ample space for five occupants. You get 639 litres of wagon space behind the rear bench, which grows to 1769L when the pews take a bow. A full-size alloy spare is a welcome touch underneath. A great brand exclusive is the global close with the key fob – something so clever you wonder why other carmakers haven’t adopted it.

Volkswagens are renowned for having next-level torsional rigidity, and this is no exception. The solid body translates to excellent five-star ANCAP crash performance.

The 2.0-litre turbo-diesel has been tweaked from the previous model, now producing 140kW and 400Nm (up from 125kW/350Nm). It is the sole mill on offer for the Alltrack and is paired exclusively with a six-speed dual-clutch ‘DSG’ gearbox. It does not feel like a diesel at all. Aside from the rarest hint of clatter, the power delivery and sound higher in the rev range could be mistaken for a petrol. The drivetrain is smooth most of the time, but we feel a conventional automatic would be more suitable for this type of car, as the DSG sometimes hesitates off the mark and causes a bit of rev-hang between gears.

Nevertheless, acceleration is pretty impressive, particularly at high speeds where the car feels unflappable and very stable. It was designed to demolish autobahns at 200km/h, there’s no doubt about that.

A full suite of driver assist systems such as forward-collision braking, adaptive cruise control and lane keep assist do come in handy, though the latter is a passive system as opposed to the active, almost semi-autonomous system used in Honda Accords.

In terms of actual driver enjoyment though, something is missing. Sure, it’s competent. It grips well around corners, rides well most of the time and it is very quiet and refined. It just lacks sparkle. When you throw it into a corner, it doesn’t give you much in the way of steering feedback; there’s no sensation or satisfaction coming through the wheel. It just, sort of, plods around the corner without much sensory reward for the driver. The chassis and suspension do well to keep it all stable and balanced, but again, it’s very formal in behaviour. 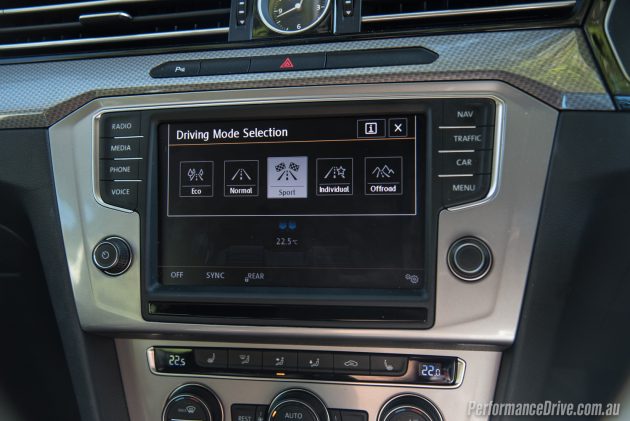 Throttle response is impressive in Sport mode. Volkswagen has given the Passat a smorgasbord of driving modes, like in the Golf GTI. There’s even an off-road mode, but this mainly gives you an arrangement of adventurous readouts, such as steering angle, a compass, and altitude indicator.

The touring fuel economy range is outstanding, with 900km-plus from the 66L fuel tank. A 5.4L/100km official fuel consumption number is quoted, and we saw 7.9L/100km with plenty of dense urban driving. The start-stop system can become annoying, even though it helps to bring the official consumption rate down. In our opinion it’s too slow to react and doesn’t combine well with the DSG, resulting in delays off the mark. Luckily, it can be switched off.

Parking sensors covering the entire perimeter of the Passat, along with light steering and a nifty reverse camera that pops out from the rear VW badge make manoeuvring the wagon through car parks a delight. 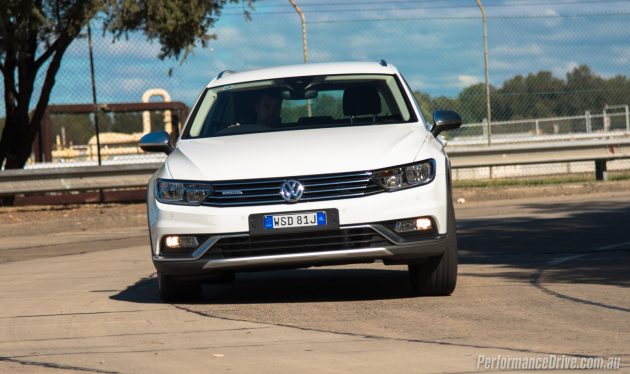 The Alltrack faces some in-house competition from Skoda and Audi – the latter will be renewed on the B9’s MLB platform before year end. The Outback is its most direct rival though and is slightly more off-road oriented (comparison coming soon).

Nonetheless, the Passat Alltrack looks like a premium product inside and out, with superb attention to detail, staggering engineering and build quality, and plenty of reasons to recommend for the price. It’s a luxury vehicle made slightly more practical and adventurous.

CONS:
– Handling/steering lack feel
– DSG hiccups
– Not as much ground clearance as some rivals (Subaru Outback)
– Dark and clinical interior