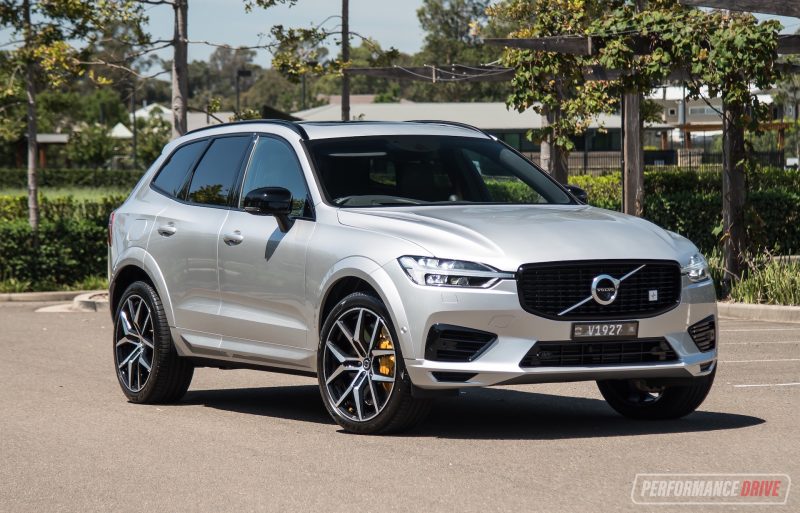 Stylish, modern and sophisticated. That’s how we have come to know Volvo cars. Even though the demand for efficiency has increased, the desire for performance has not. And that’s where the hybrid petrol-electric Volvo XC60 T8 Polestar Engineered is born. But can these opposing traits be effectively blended? It’s interrogation time. The XC60 is the Swedish brand’s mid-sized SUV currently in its second generation, manufactured in China. The range starts with the Momentum, then raises to the Inscription, with the R-Design at the top. Powertrain-wise, there are five different engines, depending on which model you opt for. The D4 and D5 are the diesel options, outputting 140kW/400Nm and 177kW/500Nm, respectively. For the petrol lineup you have the T5 and T6, outputting 187kW/350Nm and 246kW/440Nm, respectively.

At the top is the T8 R-Design hybrid which produces 300kW/640Nm. The Polestar Engineered version gets a tweaked version of its 2.0-litre turbo supercharged four-cylinder hybrid, with outputs lifted to 311kW and 670Nm. All engines power four wheels on demand via an eight-speed auto gearbox. It’s a tricky balance to perfect; to produce a car that is efficient and powerful. In fact, these attributes often contradict each other. Volvo then needs to maintain its usual luxury and world class safety standards we’ve become accustomed to, while also ensuring great packaging and standard features to compete with the expensive Euro rivals.

All XC60s are fitted standard with a suite of features, like a fully digital instrument cluster, two-zone climate control with a humidity and pollution sensor, a 10-speaker sound system with Android Auto and Apple CarPlay, blind-spot sensors, front, rear and side cameras, low and high speed forward and rear collision warning, distance-controlled cruise control, auto-dipping high beam, active lane keeping aid, auto parking assistance, rear cross-traffic alert, road sign display, and tyre pressure sensors. All of this comes at no extra cost, which is fantastic for a $60k entry price. Equipment aside, the XC60’s design alone could be enough to win you over. It looks bloody brilliant. We love the smooth skinned exterior sheet metal that flatly blends with the ‘Thor’s hammer’ LED headlights, and curves in all the right places. At the rear, the taillights now bridge closer together horizontally to create a wider, stronger stance. It is instantly recognisable as a classy Scandinavian-designed Volvo. The T8 Polestar adds conspicuous flair thanks to some gigantic performance brakes with orange callipers, matching orange seatbelts and inner speaker cones, and gold Ohlins sports suspension. Typically seen in Volvos, the interior looks and feels of the highest of quality. The T8 struts mixed leather and micro-suede seating that hugs you on the road without making you feel too constricted. The huge portrait-oriented high-resolution centre touchscreen and the fully digital instrument cluster are clean, minimalistic, and easy to grasp. Yet they are still so classy to look at. Less is best in this case. And you don’t need a master’s degree to navigate through the menus.

There is no shortage of space whether you’re in the front or second row. Only in the front, the centre console rises higher than the baby brother XC40, for example. And this makes it feel a tad less airy. If boot space is important to you, the mid-sizer measures up in the lower percentile of its competitors. 468 litres makes it a smaller space than the Audi Q5 and BMW X3, which both offer 550 litres. Even the baby Volvo XC40 offers a similar 460 litres of boot space. But the XC60’s boot doesn’t seem as small as the figures show. The space is flat and usable, with minimal intrusion from the side wall plastics and wheel arches. The XC60’s T8 Polestar variant introduces Volvo’s most powerful engine to date. It delivers an incredible 311kW of power thanks to a turbo, a supercharger and electric motor. This translates to a 0-100km/h time of 5.52 seconds according to our Vbox tests on a private road, or 5.2 according to Volvo. Behind the wheel, it’s a case of tap and go. Putting your foot down requires you to brace yourself as your neck snaps into the head rest with an immediate sense of urgency. Volvo claims throttle response and gear shift speeds have been enhanced for the Polestar with performance at front of mind – and it shows.

Maximum torque of 430Nm from the petrol engine is not accessible until you reach 4500rpm, but since there is an electric motor system to fill the gap, no hill will ever feel too much for the T8. Even considering its hefty 2118kg tare weight. In terms of economy, this is where the T8 Polestar gets a little deceiving. We discovered that the official 2.2L/100km average is only achievable under a very specific set of circumstances, which might never be available to some owners. For example, the battery needs to be in a fully charged state, either via the provided charging cable, or if you have been driving in the ‘charge battery’ mode. In this mode, the engine takes on extra load to charge the battery. It took us roughly 90km of driving to charge to full, but the fuel consumption increased to 10.2L/100km. The increase in fuel consumption to charge the battery cancels out any potential 2.2L/100km consumption.

Add to that, the 2.2L consumption will only last for about 40km until the battery gets low and starts to rely on the engine more. Then, your fuel consumption will rise to about 7.6L/100km. And that’s where it hovered around for us during our week. So, unless you plan to charge the XC60 after every 30-minute drive, restrict yourself from that tempting, head-jerking power, and drive journeys less than 40km, then you won’t see that golden 2.2L/100km displayed on the instrument cluster. Now back to performance – of course, there is more to discover in a Polestar Engineered Volvo. Those huge brake discs and orange calipers previously mentioned are part of a Brembo/Akebono brake upgrade with performance brake pads and floating slotted discs. The steering feels on the weightier side to give that sporty confidence and solid connection to the road.

You’re also rewarded with sports car like handling and cornering composure thanks to the Polestar chassis and Ohlins adjustable shock absorbers with dual flow valves. It handles really well. You can throw it into corners at speed and it will carry through with relentless stability and grip. But this also means the ride isn’t quite as comfortable as the other luxury-focused XC60 variants. Even though the suspension is adjustable, it needs to be manually adjusted outside the car, rather than through the click of a button from the driver’s seat. Polestar Engineered means engineered for the bitumen, not off-road. And those glamorous 21-inch alloy wheels and low-profile Pirelli P-Zero tyres won’t take you far off the tarmac anyway. It still has an impressive ground clearance of 216mm, which is good for a confident seating position rather than to bounce over boulders. The XC60 exhibits so many alluring traits. It is packed to the roof with tech, offers outstanding comfort, and that suave design is unmistakable. But does it try to be too many things? It’s a decent performer on the road, but you can’t use it if you want to achieve frugal fuel figures. In other words, when it comes to performance vs economy, it’s one or the other with the T8 Polestar.

If you have the infrastructure access and the motivation to charge daily, you only do short trips, and you’re not tempted to release all that grunt, your fuel bill will be brilliant. On the other hand, if it’s outright performance you want, there are rival SUVs in this class that do out-perform this, although, they don’t have the capacity to be extremely economical, albeit under strict circumstances.

PROS:
– Plug-in hybrid means you could theoretically commute petrol-free
– Instant response from turbo-supercharged hybrid
– Interior design and quality are a delight to the senses
– One of the cleanest and easiest touch-screens on the market
– Bowers & Wilkins sound system is astounding
– Safety tech