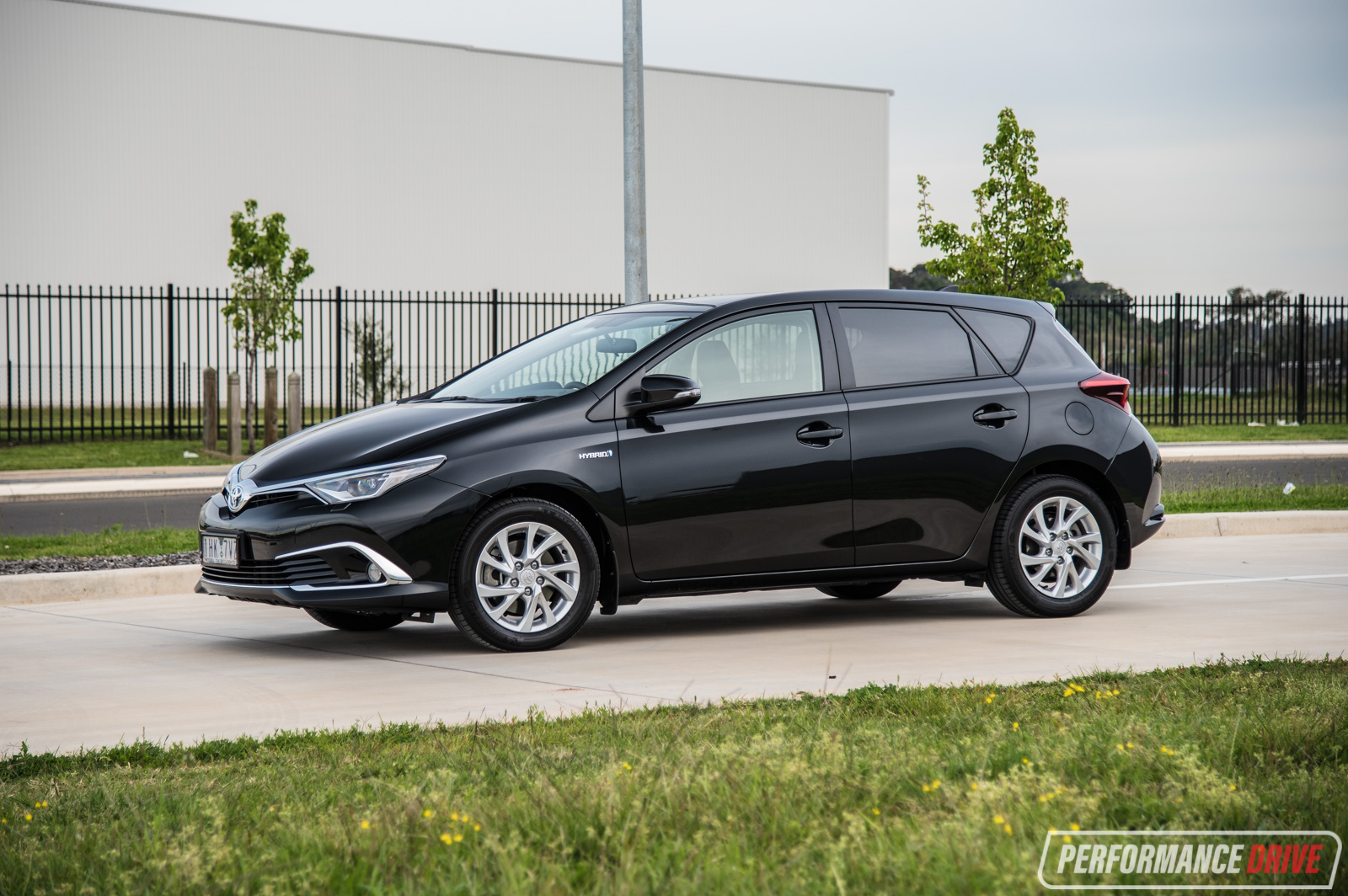 The world famous Toyota Corolla has been Australia’s number one selling car for the last three years. It can be argued that Toyota’s popularity in the small car market can be put down to its vanilla yet reliable formula. For a number of years, being careful not to change such a winning formula, the Corolla has only been made available with one engine in Australia. With fuel efficiency being at the head of many buyers’ choices, Toyota is now offering a more fuel efficient engine to the lineup. But, unlike other contenders in the segment that are using turbos and diesels to bring the fuel consumption down, the new Corolla engine adopts Toyota’s heavily invested hybrid technology. 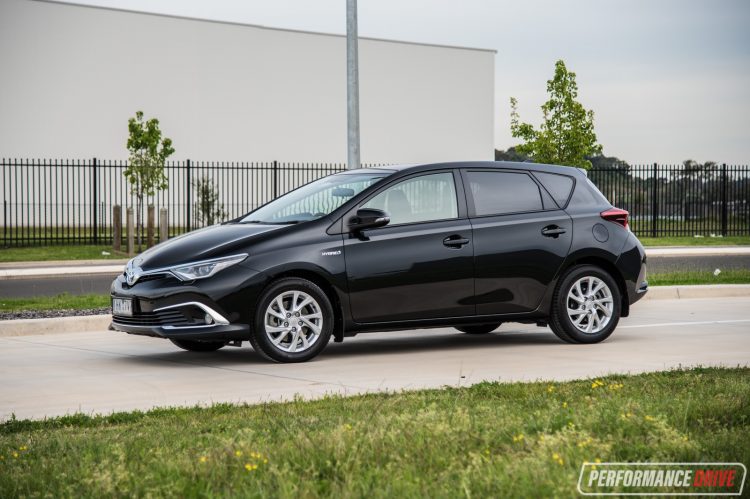 The new – and first for Australia – Corolla Hybrid sits between the petrol-only SX and ZR hatches, sharply priced from $27,530. Built into the price is the CVT automatic transmission, which adds $2000 to the other variants. It’s being offered in hatch form only. 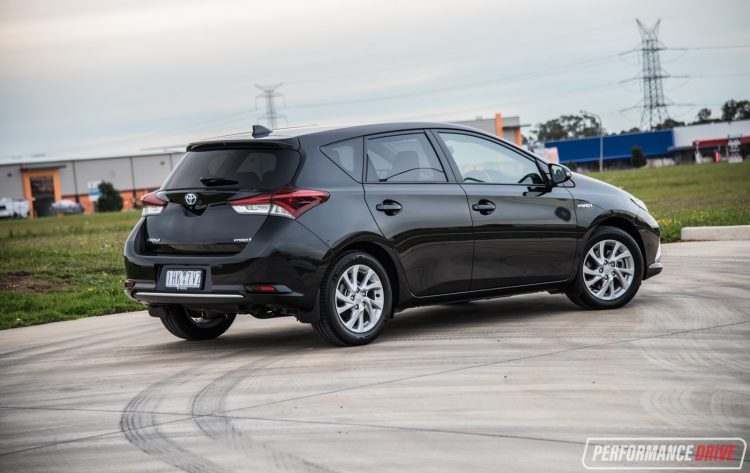 As mentioned, the Toyota Corolla is historically not renowned for offering the highest amount of features and equipment. Instead, it relies on offering what it does offer, most reliably. On top of the standard features offered in the base model Ascent, the Hybrid adds the comfort and handling advantages of double-wishbone rear suspension, electronically controlled brakes, larger 296mm x 28mm ventilated front discs, three drive modes (power, economy and electric), and a hybrid display in the instrument cluster.

Much like the rest of the Corolla range, interior materials are predominantly soft-touch, and feel high in quality and durability. Placement of buttons and controls always feel straightforward in Corollas, and here is no exception. 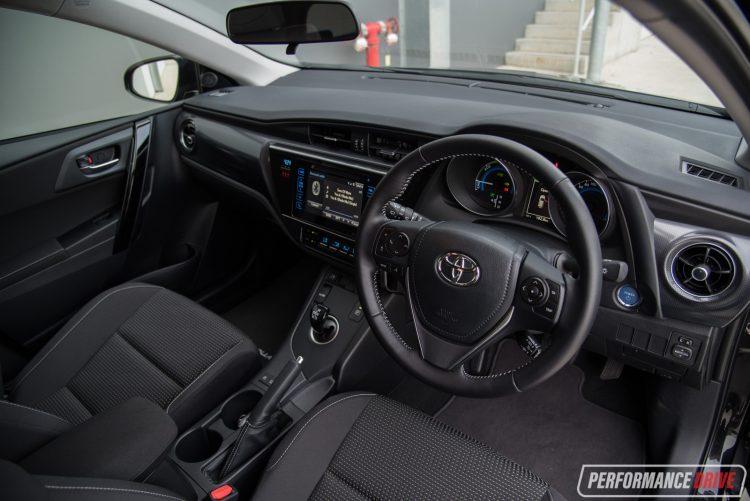 One small gripe we have – and this goes with many other cars too – is the lack of a volume knob on the sound system. You may think that the substitution of a knob with a button is a silly complaint, but if you’re driving along and you have your favourite tune blaring, when you need to turn the volume down, you have to hold your finger on a button for a number of seconds while the volume slowly increments down. This results in your hand being taken off the wheel for a longer period, and your attention is taken off the road.

Seats and seating position are modestly problematic. There are no lumber adjustment options, which is one thing, but it is not an excuse to not design the seats with no lumbar support at all. It feels like your shoulders are being pushed forward and your lower back isn’t resting against anything. It may become more of an issue during longer hauls. This is especially noticeable if you’ve just stepped out of some of the rivals such as the Mazda3.

Interior space is what you’d expect from a car in this segment. It is notably sufficient for two adults in the front as the amount you can slide the seat back is extra generous. You also get an open and free-to-move environment with a forward yet high dash and low centre console.

Boot space is also generous, at 360 litres. And there is no loss compared to the non-hybrid models as the battery is cleverly stored under the back seat. 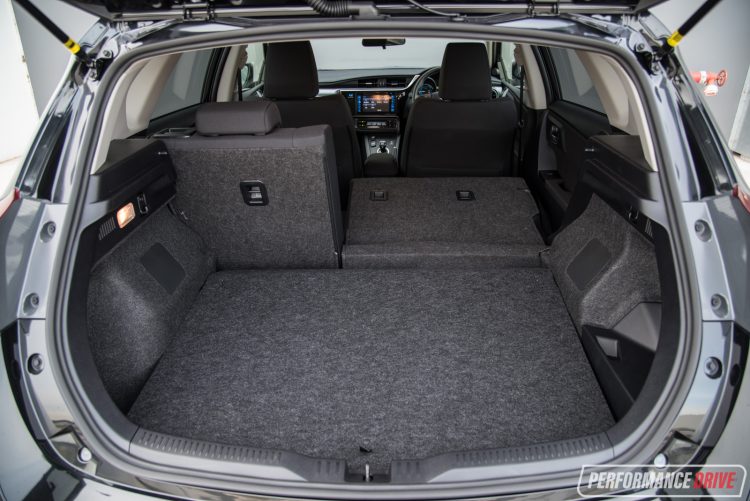 Zipping along in the new Toyota Corolla Hybrid is surprisingly comfortable. We were quite surprised of the ride quality and smoothness. It gives off a posture and balance of lightness and refinement that is right at the top of the class. Even the way it manages large potholes is flawless – probably due to the tall tyre side walls (205/55).

Handling around corners is composed. It leans yet doesn’t give into negative amounts of body roll. Steering is also light at a low speed for the car parks, and firm and stable at highway speeds.

Now to the most important aspect of this variant; the engine. The Corolla’s ‘Hybrid Synergy Drive’ system delivers a combined output of 100kW from its Euro 5 certified 1.8-litre four-cylinder petrol engine and 60kW electric motor. The petrol engine differs from the regular Corolla engine by using cooled exhaust-gas recirculation, an electric water pump, and a high compression ratio of 13.0:1 compared with 10.0:1.

These efficiency measures matched with electric power from the nickel-metal hydride battery, contribute to a brilliant official ‘combined’ fuel consumption of 4.1L/100km. This compares to 6.1L/100km for an automatic Corolla petrol hatch. Although fuel tank capacity is dropped from 50 to 45 litres, Toyota claims the maximum driving range is boosted to 1097km. But our driving habits only stretched 720km from a tank of fuel in mixed conditions. 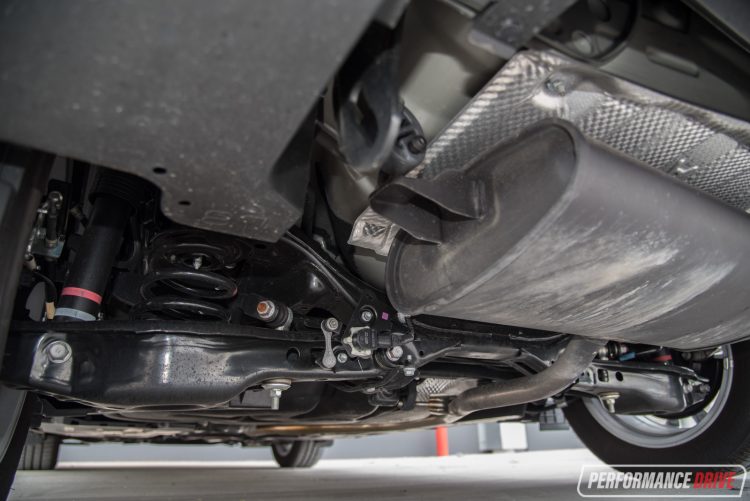 If you are having trouble working out whether the hybrid technology is worth the extra price, it is important to note that it really depends on your route type. The electric power alone is most used when travelling at less than 40km/h. So, if you find yourself commonly travelling on highways, you’ll find the fuel consumption rises to the point of a regular Corolla petrol engine. If you find yourself typically inching through city traffic, this is where the hybrid system will be of most advantage. And this is why official city fuel readings drop to 3.9L/100km. Carbon dioxide emissions are lowered to just 96 grams/km (combined), 95gm/km (highway) and 91 grams/km (urban).

Toyota’s Hybrid Synergy Drive technology offers users three drive modes: ‘Power’ mode runs the system predominately on petrol, ‘economy’ uses both petrol and electric, and ‘EV’ mode uses electric only (unless you put your foot down or travel above 40km/h, it will default back to ‘economy’ mode).

The useability of the system is a piece of cake. But on the road, we found that the hybrid system was, at times, a tad breathless. Taking off in heavy traffic too slow caused people behind us in traffic queues to take over and jump in front, especially in the all-electric mode. We couldn’t get up to speed at a reasonable pace without the petrol engine taking over and EV mode cancelling. To keep up with the flow of traffic comfortably, it felt right to accelerate more, which then causes the petrol engine to kick in, and then you’re not getting the full economy benefits. The system may not be practical for all circumstances.

If you approach a hill on the freeway, you’ll notice the engine scream, while the CVT gearbox tries its best to match the ideal revs to maximise power output. Nonetheless, it does the job, but at higher RPM than you’re probably used to. There is no tachometer for those that like to be in the know.

In Power mode the throttle is more responsive and it starts to feel about as urgent as a regular Corolla on initial take off, albeit much smoother. Once you’re up and going the hybrid wafts along with no complaint. To give you an idea of the acceleration, we timed 0-100km/h in 10.8 seconds, which is about a second slower than the regular models. Interestingly, it is about half a second quicker than the Toyota Prius brother (11.42 seconds, as previous tested).

The brakes feel like they could stop the Corolla on a dime. Due to the regenerative nature of hybrid systems, the brake pedal feels much meatier and it can feel more sensitive to what you might be used to. It certainly stops though, covering just 40.27 metres in our 100-0km/h emergency stop test. 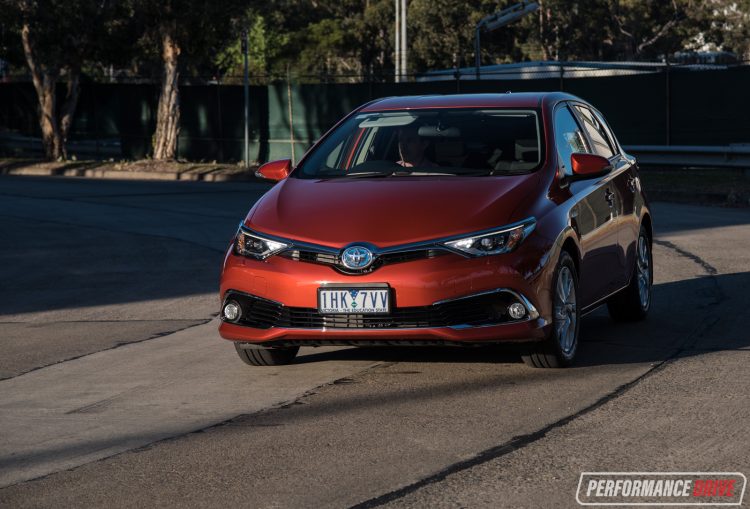 With the addition of the Hybrid in the Corolla range, Toyota is making solid ground in its attempt to make models even more fuel efficient without making you feel like you’re compromising on anything else. The Corolla Hybrid proves to be exactly that under certain conditions (city driving in  particular). Fuel efficiency will eventually be the norm. But until then, we will have to continue to pay a small premium to get our hands on it.

If you’re looking to save some dollars on fuel and your driving route and style is compatible, the new Toyota Corolla Hybrid can be a very economical everyday vehicle. It’s also surprisingly quiet and refined, with strong and solid handling. It’s also worth keeping in mind the Corolla Hybrid adds incentive by offering extra features that you only find in upper-end models.

PROS:
– 4.1L/100km combined fuel consumption
– Ride quality and driving refinement
– Hybrid premium price is almost absorbed by extra features
– Only hybrid in the class, and one of most affordable on the market
– Ease of driving, lives up to Corolla tradition

CONS:
– Front seats unsupportive and uncomfortable
– Engine needs to scream when hitting a hill at highway speeds
– Hybrid/all electric mode struggles to keep up with traffic flow in some conditions