Peugeot has brought its refreshed 2016 208 GTI to Australian shores, adding some French spice to the exciting and competitive compact hot hatch market segment. 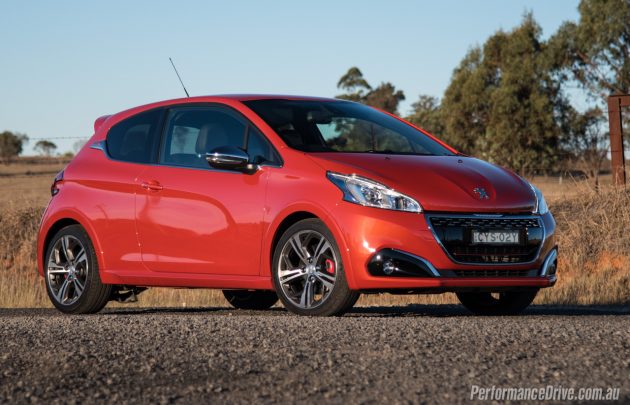 Before you ask is this really a hot hatch, there’s something you should know about the 208 GTI. At 153kW, it’s the most powerful car in its class, excluding the limited edition Renault Clio R.S. 220. 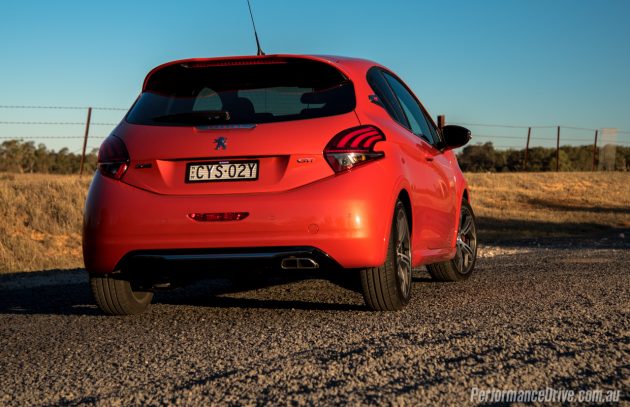 The 208 GTI’s intricate headlight design casts a bold profile at night, while the $990 ‘Orange Power’ paintwork (as tested) turns heads during the day. The front fascia features two subtle bonnet lines meeting the black and chrome grille, complete with a function-less red splitter for that ‘sporty’ look. The front three-quarter view is particularly attractive, with chrome mirrors and window sills making their way into a chrome GTI badge and subtle rear spoiler, riding atop stylish 17-inch alloys.

Overall then, a typically personable French design exercise, with flared but not outlandish styling. But what about the inside?

The format of the interior is largely unchanged from the regular 208, albeit with a sporty black and red colour scheme with some special touches thrown around the cabin. There’s leather that weaves its way from the door panels through the centre of the dash, complete with red stitching, aluminum pedals and gear-lever for that classically boy-racer GTI look, and the leather/fabric seats come with big side bolsters to hold you in place in the twisties. They remain comfortable when stuck in traffic, too. 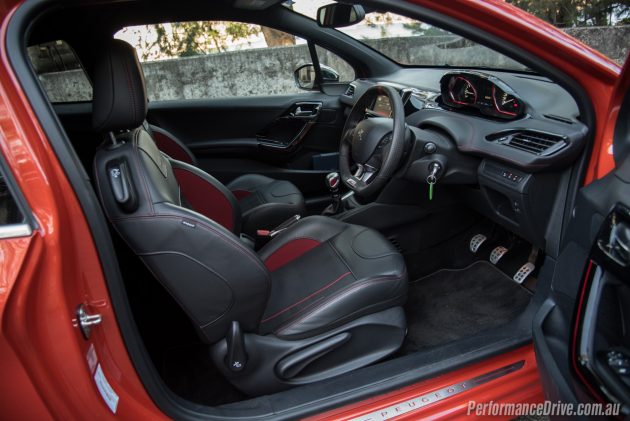 You can certainly tell just from sitting inside the 208 that this isn’t a German or Japanese vehicle; and we like that. It’s all too easy for interior designs to blend in together, with only minute differences from car to car. Here though, Peugeot has gone a different direction. There’s a tiny little steering wheel that rides low, and a dashboard that curves around a 7.0-inch MMI screen. The climate control buttons are housed in shapely black plastic and while basic in their appearance, blend together in a uniquely European aesthetic.

There are times that French stylistic hubris can prove tiresome, like the positioning of the cruise control stalk, which is almost completely hidden behind the wheel, and the cup holders that can house an espresso shot, and not much more. A rear-view camera is a $300 option, which seems a little steep for the top of the range model. This isn’t helped by the C-pillar that eats into rear visibility. But, like us, you’ll probably be prepared to forgive Peugeot for focusing on the GTI’s performance rather than its packaging minutia. 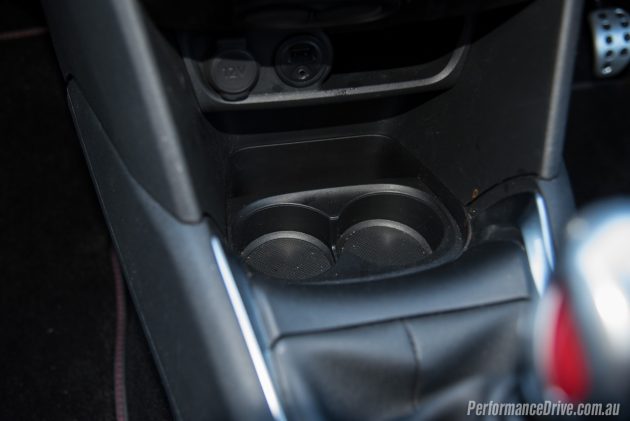 Speaking of packaging, let’s see what Peugeot throws in for the $30,990 asking price (plus on-road costs). Peugeot is keen to point out the GTI asks only $1000 more than the GT-line 208, and that gets a significantly less powerful 1.2-litre turbocharged 81kW/205Nm engine. From this perspective alone, the GTI is a performance car bargain.

The GTI comes packaged with Bluetooth and voice commands, climate control, chrome accents and exhaust tips, LED lights and indicators, satellite navigation, cruise control, and more GTI badges than you can throw a compact hatchback at. A number of the mechanical components are also upgraded but we’ll get to those in a minute.

Surprisingly, for its size, the cabin space is capacious and airy. There’s more headroom than you’ll find in a Polo GTI, and so long as you’re not driving across the country, rear passengers won’t have too much to complain about.

On a similar note, the rear seats fold in 60:40 configuration to see boot space expand from 311 litres to 1152 litres. It can actually accommodate some bulky items, like surfboards, for example. Peugeot also throws in a full-sized spare wheel, which is very rare for this style of vehicle.

And lastly on the safety front, the latest 208 has an ANCAP score of 34.03 out of 37, resulting in a five-star safety rating. This is thanks to six airbags, ABS, stability control and EBD, and the widely used and evolved PSA PF1 platform riding underneath. 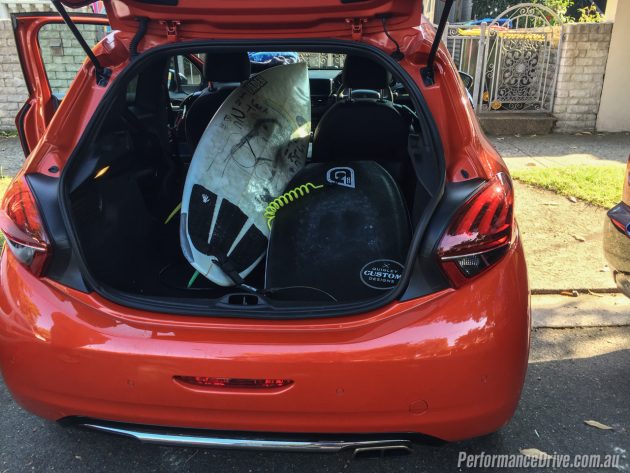 The 208 GTI comes packaged with a 1.6-litre turbocharged four-cylinder unit, producing 153kW of power at 6000rpm, and 300Nm of torque at 3000rpm. This takes the little 208 from 0-100km/h in a timed 6.70 seconds – a scratch slower than the Volkswagen Polo GTI manual we tested last year, arguably this market segment’s yardstick.

The power delivery is by its nature very turbocharged, with little tangible power available low down in the rev range, hindered by turbo-lag. Continue with the throttle and suddenly the 208 turns feral above 3000prm. The 6000rpm mark comes up very quickly beyond this point, partly due to short gear ratios and partly due to this engine’s readiness to rev when the turbo is all spooled up.

It sounds good too, with a deep muffler tone at the back burbling and popping away at low revs, and then turning into a growling barking when you give it the beans. You can also just hear the turbo whistling away. 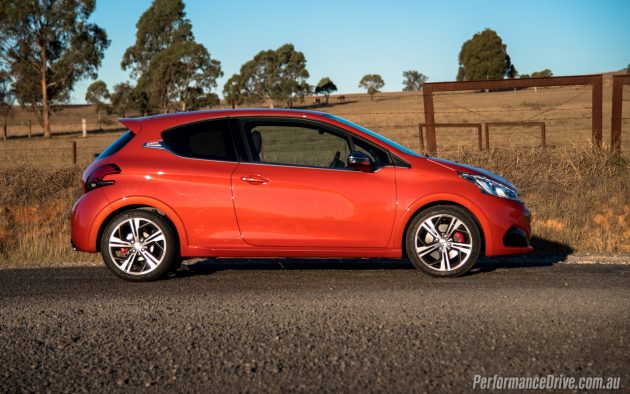 Taking the 208 GTI for a spirited drive is a simple reminder of just how much fun can be had in a lightweight vehicle. Even in a front-wheel drive platform, 153kW can feel like a whole lot more in a car weighing just 1133kg (tare). The fact that Peugeot only offers a six-speed manual only heightens the excitement and fun factor.

Driving enjoyment is also very high thanks to the great handling and grip. This little thing hangs on in the bends, with the 205 Michelin tyres biting into the tarmac like circular claws. Pair this with a well-sorted steering setup that offers a sense of immediacy and engagement, and you’re left with nothing but a huge grin. In terms of quick directional changes, the 208 doesn’t have the same razor-sharp turning dynamic as some of its more hardcore rivals, but as we’ll soon discover, there is a benefit of this.

On the everyday drive the 208 GTI performs exactly like a regular compact hatch. It’s tiny, so there’s no messing about parking or in tight situations, and the 1.6 engine remains zippy and surprisingly flexible throughout the rev range. Peak torque, as mentioned, comes in at 3000rpm, bringing a strong mid-range to your journey, which is ideal for charging up small hills and away from roundabouts.

Ironically, one of the 208 GTI’s biggest achievements is how comfortable it is. This is something not often said about a compact hot hatch. As we’ve seen on cars like the Polo GTI and even the domestic rival Clio R.S., a manufacturer’s efforts in ‘hotting up’ the hatch usually eventuates in terrible ride quality. 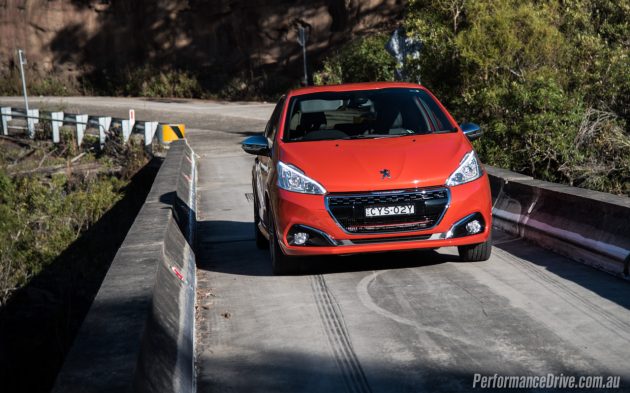 The 208 GTI bucks this trend with a suspension calibration that perfectly strikes the balance between compliance and agility. It is arguably the most comfortable offering in the hot super-mini category. Don’t be fooled though, this isn’t a Rolls-Royce and drivers new to hot hatch suspension might still require some time to acclimatise, although not as much as in the rivals.

Stopping power is provided by 302 x 26mm ventilated front and 249 x 9mm solid rear discs. It stops with serious urgency, despite a pretty average 100-0km/h distance of 42.02 metres under our emergency stopping test. We experienced no fade during a heated drive, no doubt thanks to the lightness of the car, with good power and feel coming through the pedal inspiring confidence at all speeds.

In terms of economy, usually downsizing to a compact hot hatch like this has benefits in fuel saving. Not so much in the Peugeot, however. We couldn’t get anywhere near the ADR figure of 5.4L/100km on the combined cycle, averaging 8.1L/100km. This, we feel, is on the limit of what’s acceptable for a hot hatch.

The Peugeot 208 GTI is a car that doesn’t take itself too seriously, even in the eccentric world of compact hot hatches. While you may set a quicker lap time in a Clio R.S., or shift in half the time in the Polo GTI DSG, for some buyers out there, they’ll be purchasing the 208 GTI for something less tangible entirely; how it makes them feel. Manufacturers have a tough job, and one of the hardest things to engineer into a car is a personality. Well, a good one at least. But that’s precisely what Peugeot has done here. The 208 GTI is full of life and character – you’ll immediately want to be friends with it.

CONS:
– Thirsty for its class
– Overly quirky areas; not as practical as some rivals