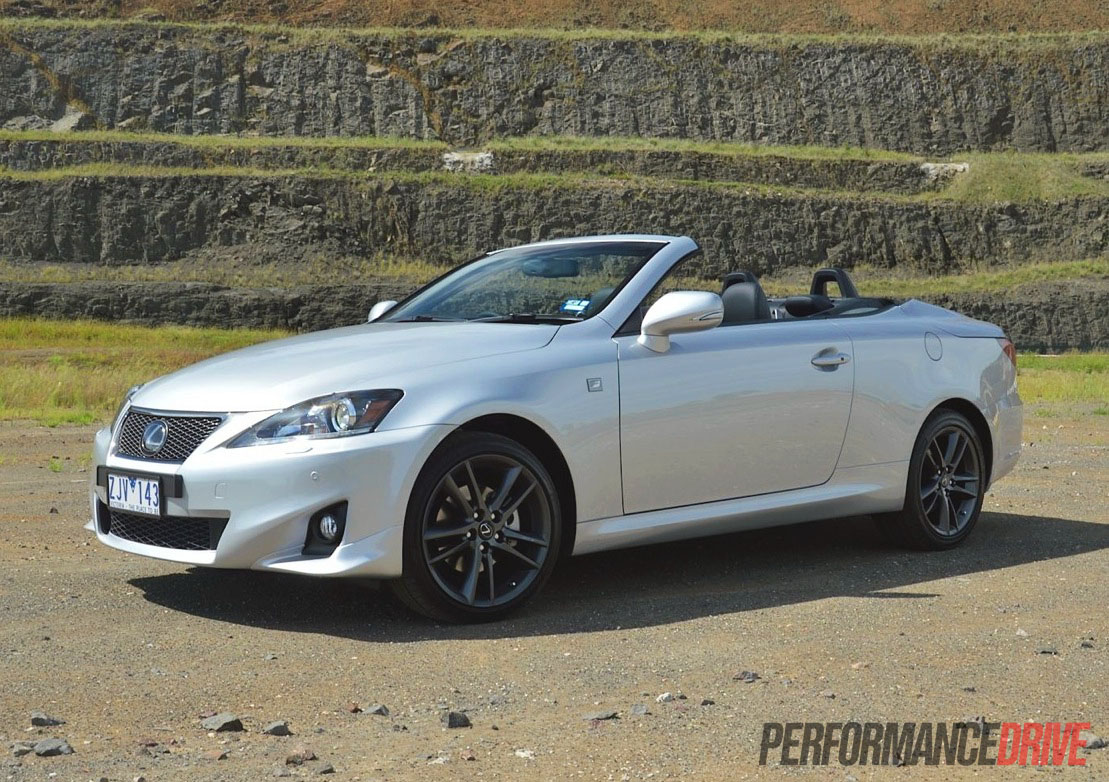 It might not shower you in a cannonade of kilowatts, but it doesn’t stop the 2013 Lexus IS 250 C F Sport being a serious contender in the convertible sports car segment. It offers accurate steering and engaging handling, along with invigorating open-top driver enjoyment. 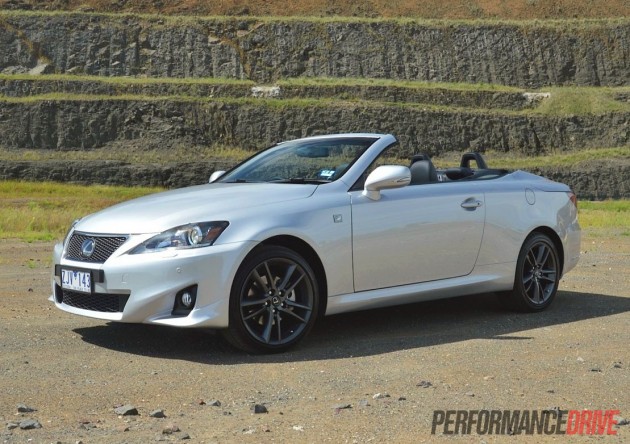 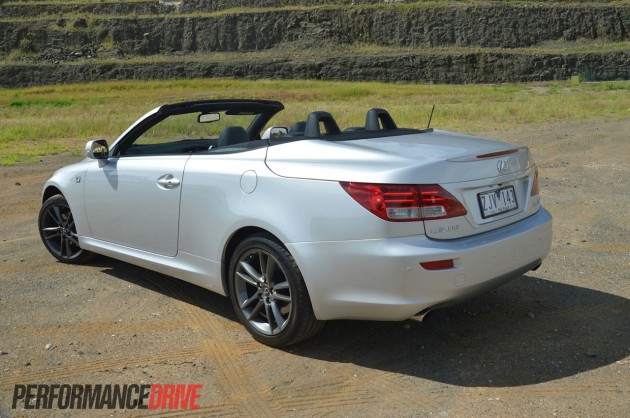 Up until now, Lexus has only ever offered its sporty F Sport trim level on the IS 250 and IS 350 sedan. This is the company’s first ever performance-skewed convertible.

The IS 250 C first arrived in Australia in 2009. Based on the IS 250 sedan, the ‘C’ comes with the same 2.5-litre V6 engine producing 153kW of power and 252Nm of torque. The unit is matched up to a six-speed sports automatic transmission feeding power to the rear wheels.

For the F Sport, which went on sale in November last year, the heart of it all is the same; there’s no power or torque increases. What it does bring to the table though is the full F Sport package which includes a bodykit with a sharper front bumper bar, dark 18-inch alloy wheels and sports suspension. 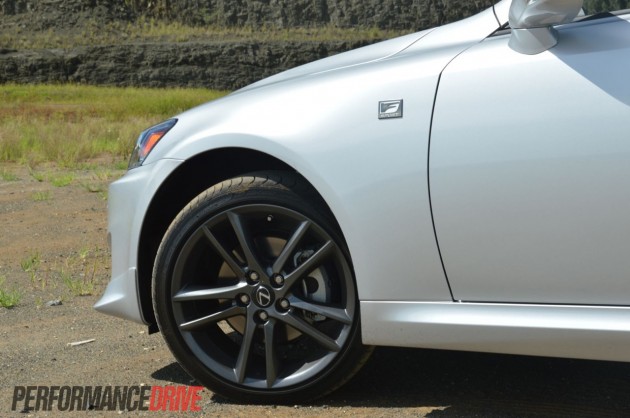 One of the great things about Lexus vehicles, in our opinion, is that most models come with loads of features straight out of the bag. Although there are some options, most of the equipment is all part of the specific trim line that you go for – the Prestige, F Sport, or Sports Luxury. 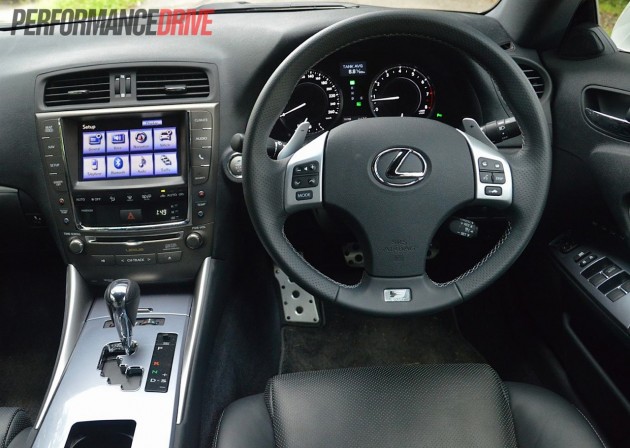 The button-touch electric folding roof takes around 20 seconds to retract, provided the special pull-out ‘bucket’ in the boot is in place to store the roof.

Seat comfort is at the finer end of the luxury class, with good headroom and legroom for the front seat passengers. The foot well in the driver’s seat might be a touch confined for some, but on the plus side it makes you feel cocooned in place like a proper sports car.

Upon entry, the driver is welcomed by an automatic seat and steering column adjustment according to their position when the car was last driven. Upon exit, the steering column and seat moves back and out of your way to allow for an easier exit.

The electric seat memory function can store three different positions. It’s then simply a matter of hitting your number to have the furniture adjusted to your favourite position.

In traditional IS form, the IS 250 C F Sport can be set up to provide a very good driving position, with the steering wheel falling perfectly at your chest and the pedals in proportionate distance from the seat. Taller-than-average drivers may find it slightly claustrophobic inside, partly due to the cocooned atmosphere, with a high centre console wrapping you in. 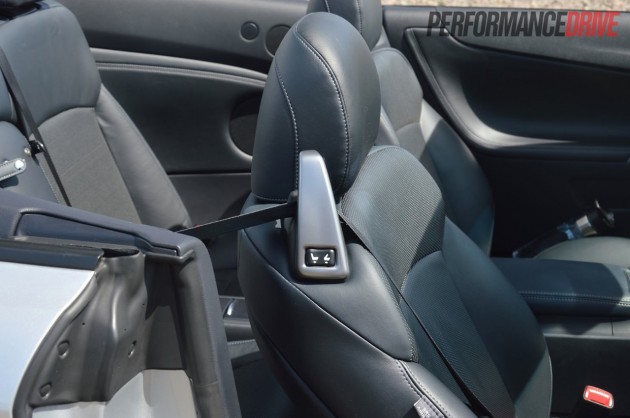 Rear seat passengers aren’t as pampered, with restricted legroom and headroom when the roof is up. When the roof is down, headroom is obviously no issue. There are electric windows in the back which can be lowered or raised regardless of the roof’s position.

The seats backs are slightly angled for a laid-back position, which does provide some compensation against the snug legroom in terms of overall comfort. Access to the rear seats is made easy thanks to a button-touch electric front seat mechanism. 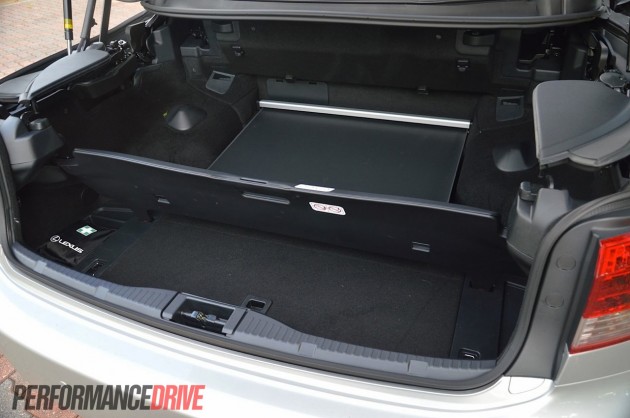 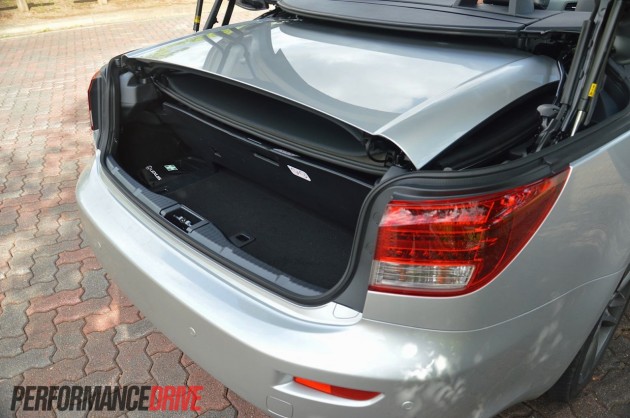 Boot space is bountiful, with 391 litres on offer. When the roof is down, volume is significantly reduced leaving only around 50cm of depth and 205 litres.

If you plan on using the 250 C as your daily runaround to do the shopping and so on, you will probably have to resort to leaving the roof up. Due to the flip-down roof, the boot lid is rather large and heavy too.

Helping the F Sport stand out among the humdrum variants, a sharp front lip spoiler is instantly noticeable, while the dark 18-inch alloy wheels and black mesh grille at the front give the overall styling some contrast and a sinister appeal.

With a the new model IS coming out later this year, the current model is starting to age. Rather gracefully we must say. After being launched back in 2005, it still looks modern enough to blend in with the popular German rivals. The next model steps it up a notch with sharper highlights and the company’s new ‘spindle grille’ design at the front.

Keeping occupants as safe as possible, the IS 250 C comes with a multitude of airbags, an advanced traction and stability control program with normal, sport and snow settings, as well as auto HID headlights, a first aid kit in the boot, and daytime running LEDs.

The standout safety feature is the radar-guided cruise control. When engaged, the system continuously assesses the road ahead and can keep the car at a safe distance between you and the car in front. The distance can be adjusted too, which is great during higher density highway traffic.

The system applies the brakes itself and speeds back to your set speed once the road ahead if freed up. It won’t bring the car to a complete stop though, instead, it gives a sound warning asking the driver to take over controls when the speed drops below around 40km/h. 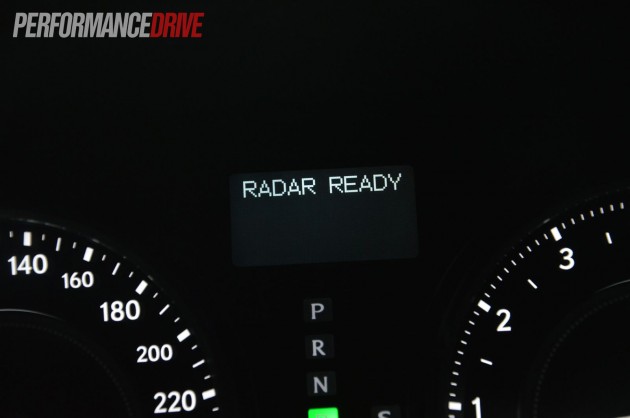 You might hear of criticisms regarding roof-down handling performance of convertibles, with claims of a ‘noticeable difference’ in body flex on some cars.

With the IS 250 C, although you can just feel the difference when you really tackle some twists and bends with the roof down, we feel it’s not worthy of any sort of negative comment. The chassis’s response will easily surpass most driver’s expectations.

The F Sport, with its sports suspension, rails around corners. And we mean that. Like the sedans, the drop-top IS remains assertively flat and solid during moderate to high speed bends, and even supports swifter direction changes when you encounter twisty switchbacks. It’s a highly capable package, and a fun one at that.

Using the paddle shifters – standard on all 2013 IS 250 C variants – the F Sport can be driven like a sports car with somewhat engaging and rewarding benefits. There is a little blip on the downshifts, and upshifts are lightning quick like with all Lexus sports automatic transmissions. 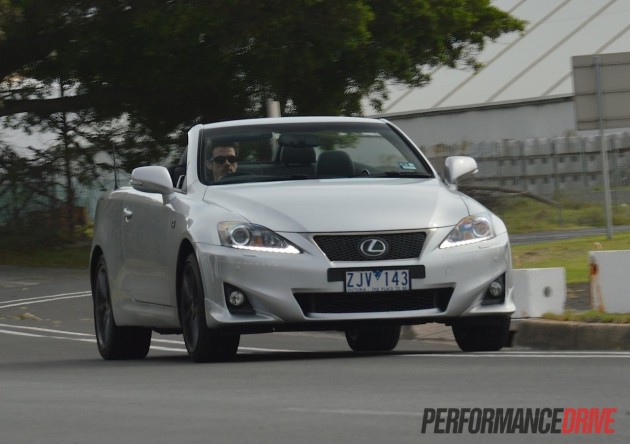 In terms of acceleration, we timed 0-100km/h in a reasonable 8.4 seconds. Although this sort of time is hardly going to involve smokey wheelspin starts, it is brisk enough to support stimulating higher speed sprints between the corners. If any area suffers, it’s low-end pick-up.

The engine does enjoy a rev. Peak power (153kW) is reached at 6400rpm, but more importantly, peak torque is reached at 4800rpm. This gives you a clear indication of the engine’s preferred tempo and behaviour. It’s kind of a good thing too as it encourages you to be a little bit frisky with the throttle. On top of that, the V6 engine does give off a nice naturally aspirated roar. 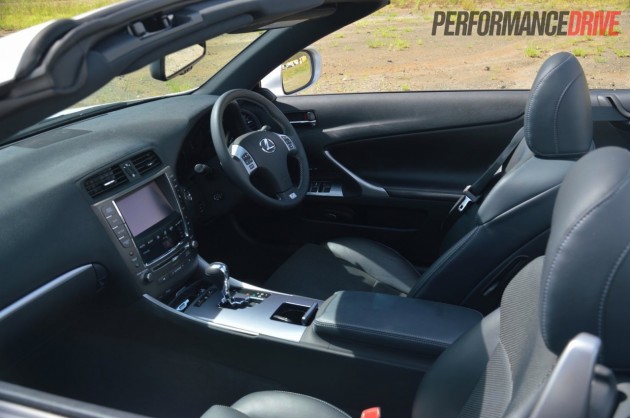 Driving with the hood down makes you feel special, and really cements home the fact that you’re driving a Lexus; a brand synonymous with prestige and luxury. You feel like you’re driving something twice or even three times as expensive.

With the roof up, interior comfort and quietness is at the top of the class. It’s incredibly mute inside, with well-insulated doors and even the folding roof. There’s absolutely no rattles or ill-fitted trims pieces creaking about either. It all gives off an incisive quality feel.

If you’re in the market for a premium convertible that’s also sporty, the IS 250 C F Sport is precisely that. It offers the company’s excellent reliability and build quality inside and out, while the F Sport pack brings up its attitude for a more aggressive stance, and subsequently, a more aggressive character when it comes to handling.

The only downside that we see is the suggestions and stereotype that the IS 250 is underpowered and too slow. For us, those remarks don’t really ring true to the car’s capabilities. The extremely smooth V6 likes to use the full capacity of its lungs, bringing with it an aurally pleasurable roar, but more importantly, it’s performance is on par with the entry-level rivals.

As a bonus, all Lexus IS purchases are accompanied by the company’s ‘Encore Privileges’. This, for the warranty period of four years/100,000km, includes free service loan cars or drop off/pick up services, ‘DriveCare’ 24-hour assistance with up to $150 free taxis in the event of a breakdown, as well as access to Lexus’s premium ticketing for exclusive events and entertainment. 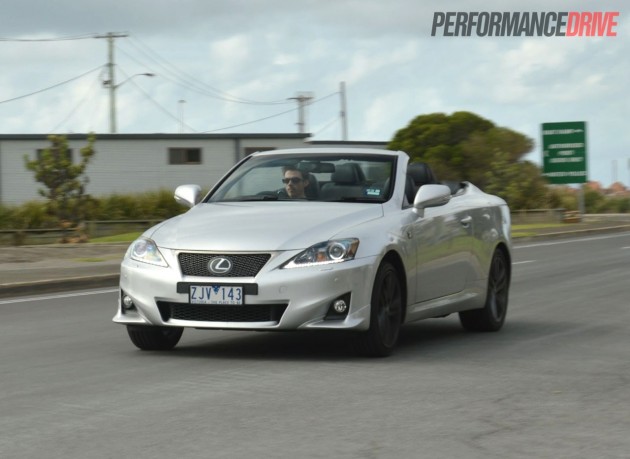 (Although the IS 250 C is the entry-level variant in the Lexus lineup [there is no IS 350 C], the competitors below are listed in terms of their similar price point and power outputs)

It’s been nearly a year since we first got our hands on the Tesla-challenging, all-electric, performance-luxury SUV from Jaguar. The...

Aside from cars that can rail around corners and compress your organs with huge longitudinal g-force, we also love cars...

While plenty of the more established SUV makers in this space are running around trying to sort out their electrified...