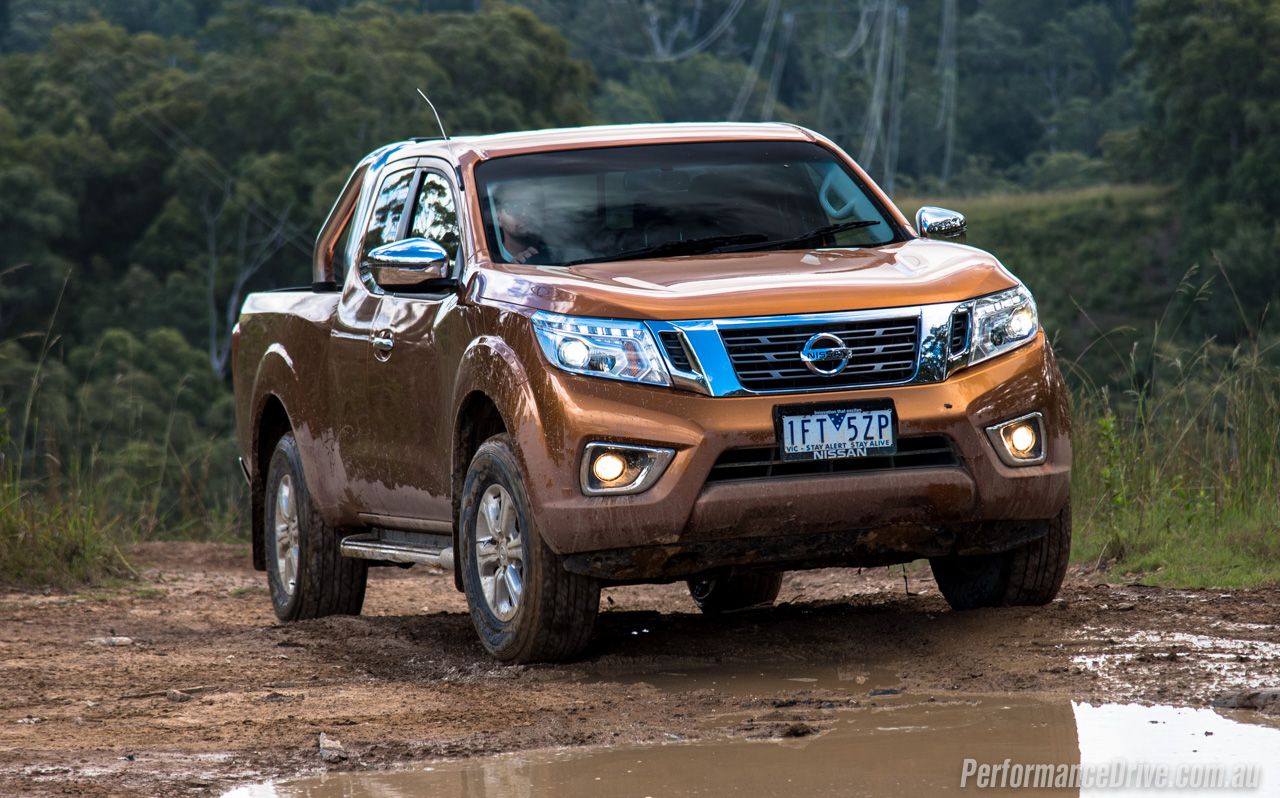 The 2016 Nissan Navara NP300 definitely stands out as one of the most attractive entrants in a viciously overcrowded 4×4 ute segment. Like Triton, HiLux, Ranger, and Mazda B-series, the Navara is a veteran of the utility sector. These cars also have to deal with the VW Amarok youngster, a few Chinese imports such as Foton Tunland, as well as Isuzu’s D-Max. 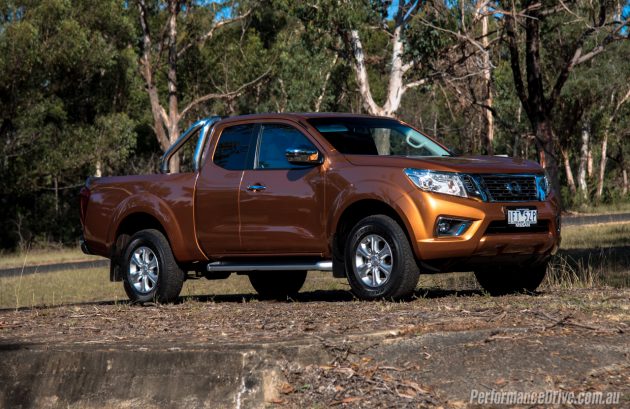 The past 12 months has been a massive year for the pickup utility, perhaps more so than any other category with most entrants either receiving mid-cycle facelifts or complete redesigns. The Navara is one of the latter and brings with it an increase in size, plus an interior and exterior which are far easier on the eye than many competitors.

We’re testing the ST King Cab variant. It sits in the middle of the range in terms of specification, body style (with a single cab and dual cab either side) and price (from $45,590). With an obscene amount of choice out there, where does Navara sit on the totem pole and should it be your next choice? 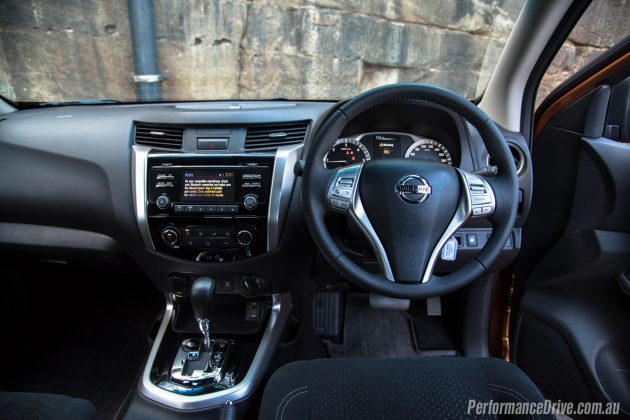 The King Cab body style uses a ‘suicide’ rear door arrangement, where the entire body panel behind the driver and passenger doors swings off rear-hinges to reveal two fold-down seats. These little seats are pretty big and useful, comparatively, although long journeys would become uncomfortable. Nissan has fit rear climate vents into the back of the centre console, which is a nice touch.

While you do get the top-spec 2.3-litre twin-turbo diesel engine, with 140kW at 3750rpm and 450Nm between 1500-2500rpm, tied to a seven-speed automatic, you do miss out on the five-link coil-sprung rear suspension arrangement found in all dual-cab variants. The trade-off of the King Cab is a slightly longer tray (1750mm vs 1503mm in dual cab), and a 999kg payload (up from 986kg in ST dual cab). Towing capacity is rated at 3500kg, right up there with the best in the class – equalling Ranger, BT-50, HiLux.

The power figures trail only Ranger and BT-50’s 147kW/470Nm combination at this point, but Volkswagen’s recently announced 2017 Amarok 165kW/550Nm V6 as well as Mercedes’ rumoured 190kW/550Nm ute might cause Nissan to reconsider a six-cylinder option – especially when you remember Nissan offered such an option with the superseded D40 Navara. An official average fuel consumption rating of 7.0L/100km seems reasonable, with 20,000km service intervals also promising to help the bottom line.

Sitting inside, the interior strikes us as car-like and logical with its overall layout. A nice three-spoke steering wheel sits ahead of easy-to-read gauges and trip computer. The driving position is quite high and the steering column offers limited adjustment, but you’re reminded of the sheer height of the thing (ride height is 3mm above a HiLux SR5). What’s slightly disappointing is the infotainment screen and its dated menus and buttons. It does offer a reverse camera, but it doesn’t present virtual lines which turn with the wheel like some rivals. A variety of switch blanks generate high levels of FOMO (Fear Of Missing Out).

The electrically operated rear window is a highlight in the segment, providing a nice vent for the cabin without the wind noise of dropping the side windows. It also allows the rear passengers to toss items into the tray without having to get out.

What truly had us shaking our heads is the absence of a tub-liner. We get that several competitors also charge more for these, but it’s just as disappointing as the death of the spare tyre in passenger cars. Why should you have to pay extra for something so insignificant that protects the resale value of your investment? 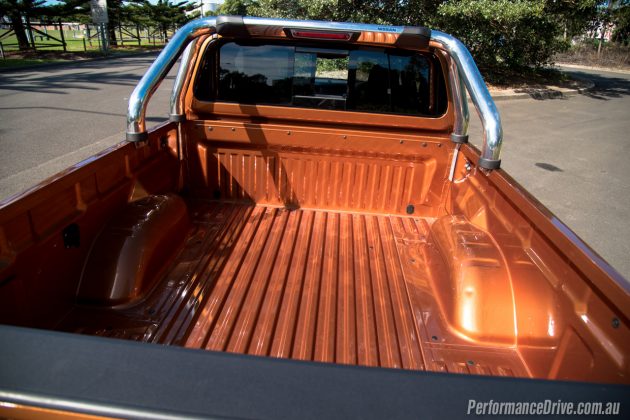 So far a mix of pretty good with a few perplexing negatives. Maybe the drive is where the Navara can claw back? Well, yes in some ways, but here we encounter two frankly ridiculous attributes too. First of all, the steering is so heavy and cumbersome at low speeds, it makes parking such a laborious and time-consuming affair. It needs more power-assistance at low speeds, like some of its competitors, to overcome this trait. Three point-turns become five-point due to the confluence of heavy steering, poor rear camera and hard-to-judge corners of the vehicle.

The second point is – we hope unique to this King Cab body style – a ‘kangarooing’ effect above 80km/h. The ride becomes so unsettled and bobs uncontrollably along freeway corrugations that you wonder how this calibration was signed off. It’s such a shame, because the chassis itself feels very rigid, with a sure-footed, eager turn-in that makes it otherwise one of the nicest utes to drive. That rigidity, as well as a full suite of safety features, contributes to a five-star ANCAP rating. 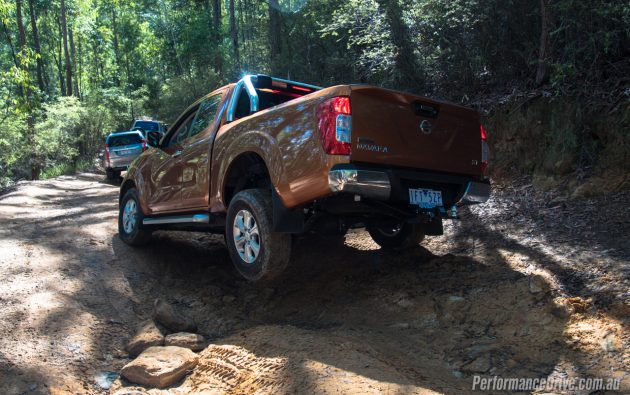 The drivetrain marks a major turnaround for this review, with a clatter-free idle and a strong, smooth surge all the way through the rev range. It feels responsive and quick, with the seven-speed gearbox never lagging or showing signs of hesitation, until you switch it to manual mode. We think this one is best to leave it to make its own decisions. The stability control works exceptionally hard to keep wheelspin at bay around hilly sections, especially in the wet, while switching it off will unleash the inner-bogan in you.

Fuel economy on the freeway varies between 6L/100km and 8L/100km, but careless use around town will see you spend most of your time in the tens. That gave it an average of 8.1 during the time we spent with it.

Where the Navara truly impresses is off road. A 228mm ride height combined with a tough chassis and underbody protection means even an amateur can traverse punishing and unforgiving terrain. The throttle response in low-range with the (standard) rear differential locked, it is eminently manageable, with brakes, engine and everything else standing up to all we could throw at it.

An excellent 32.2-degree approach and 26.5-degree departure angle combined with generous wheel articulation saw the Nissan get some crazy angles. Suddenly, all the aforementioned flaws don’t matter as much. This has got to be one of the best off-roaders in the class. Little things such as a 240V outlet in the tray add to the versatility, if you want to go camping and things while you’re at it. 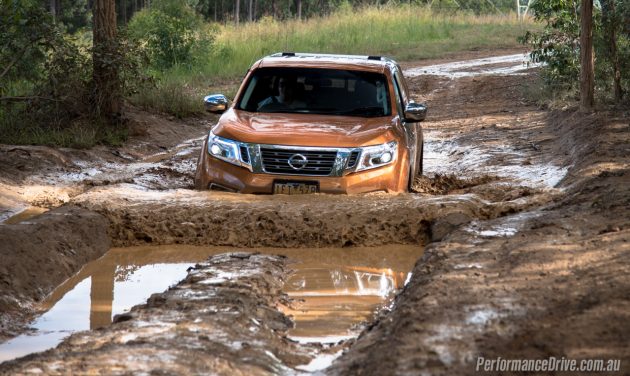 As we drove home from off-roading, the true appeal of these cars finally stood out. Not only do you get something tax-deductible, with enough room to seat most family members (temporarily in this case), decent refinement and tourability, but on the weekend you also have the option of going places you just can’t go in a normal car. At the risk of sounding clichéd, it really is a Swiss Army Knife on wheels.

It has one of the strongest, most refined diesel engines but is let down by some practicality niggles. It will continue to find plenty of friends though, and we’re sure once Nissan upgrades the infotainment system and addresses the steering and suspension tune it could be the best in the class. In that respect, it will be very interesting to see what Mercedes-Benz does with the NP300 platform for its ute.