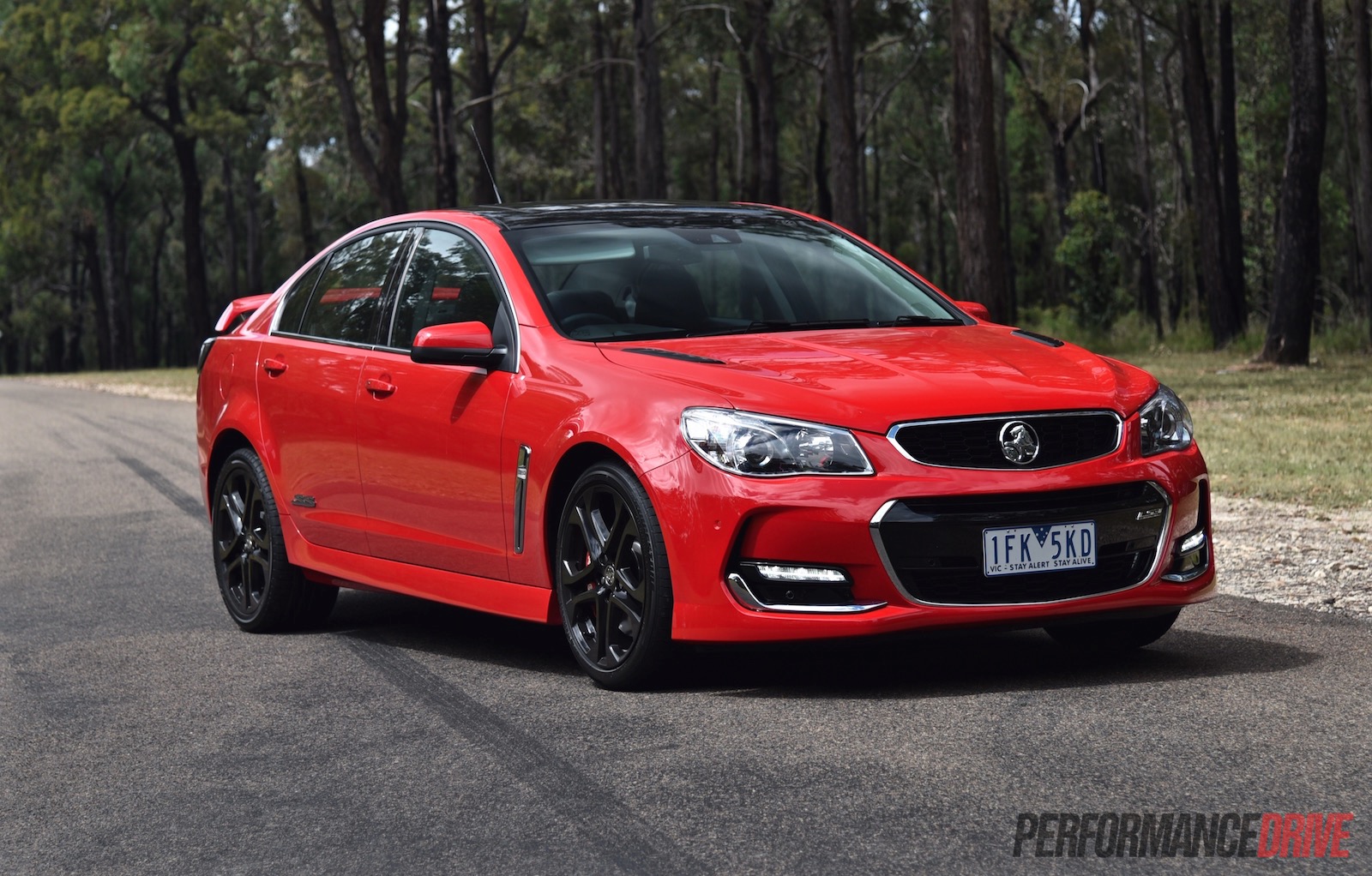 This is it, folks. The last ever Australian-made high-performance Commodore; the 2016 Holden Commodore SS V Redline VF II. This is the Commodore that we should be most proud of. 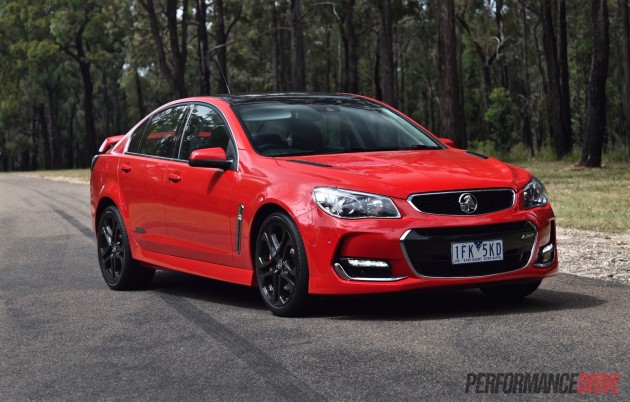 Holden will cease local manufacturing next year – if not sooner – which means the humble Commodore as we know it is on its death bed. Sure, Holden might import some yank tank from one of GM’s various brands in the USA to replace the Commodore, but it won’t be the same. Rear-wheel drive could be exchanged for front-wheel drive, and it won’t be offered exclusively with naturally aspirated sixes and V8s.

But anyway, let’s take a look at what we have here and enjoy it while it lasts. The SS V Redline is the top model in the Commodore ranking. It’s the most expensive, priced from $56,690 for this auto sedan version (less $2200 for the manual), and the fastest and most athletic in the corners. Prices have jumped slightly for the last edition, from the VF I Redline manual price of $52,490, to $54,490 for the manual VF II.

Like all VF II Commodore, Calais and Caprice models optioned with the V8, the 2016 SS comes with a new-to-Australia Chevrolet LS3 naturally aspirated V8. The 6.2-litre unit produces 304kW and 570Nm, making the VF II the most powerful Commodore ever. What a perfect way to go out with a bang. 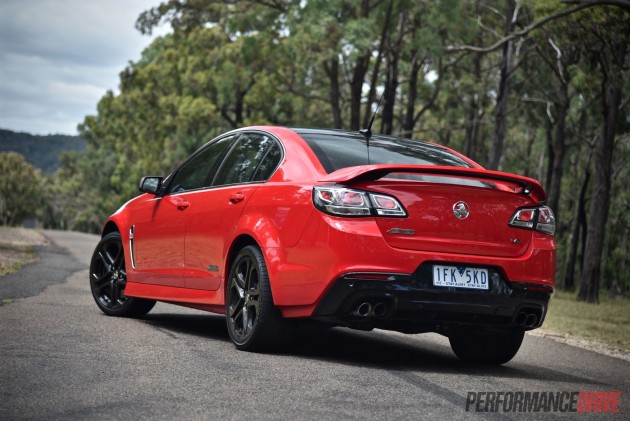 The Commodore SS is one of the biggest mainstream sedans on the market at the moment, offering a huge amount of headroom and legroom whether you’re sitting in the front or back. This helps make it a very comfortable cruiser, ideal for families and even for adults during business trips.

Visibility is good for the driver, except through the nearest A-pillar, and the driving position can easily be set up to suit your preferred style thanks to power-adjustable leather-wrapped sports seats. These seats are carried over from the VF I, which is a good thing as they are extremely comfortable and soft yet highly supportive for all shapes and sizes. We think that’s what we’ll miss most about the Commodore; the sheer size and comfort, catering perfectly to our laid-back lifestyles.

Nothing has changed for the VF II interior over the old version. The Redline is well appointed though, featuring an 8.0-inch MyLink infotainment system with sat-nav, in-built music apps – Pandora and Stitcher – and a nine-speaker Bose sound system. There’s also a reversing camera, and head-up display for the driver along with a digital display within the instrument cluster.

The Redline also comes with an impressive collection of safety technologies, including forward collision alert which warns the driver of upcoming objects if there is potential danger, along with lane departure warning and blind-spot sensors. All Commodore variants have been given a five-star ANCAP safety rating.

As for the exciting Redline stuff, buyers get an updated FE3 sports suspension system on the VF II, new 19-inch alloy wheels (or optional 20s), Brembo brakes for the front and rear (not just for front), and of course a unique bodykit adopting the new-look front grille and vertical side inlets as per VF II update. The VF II Redline also gets real bonnet vents, albeit small with only three of the five slits actually going through. Buyers can also option for a black ($550) or metallic black ($1100) roof and a rear wing ($500), as featured here. The electric sunroof is standard on the sedan, as before. 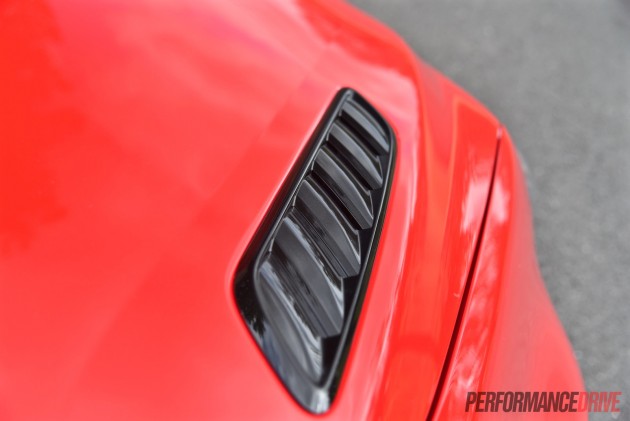 It is louder than before too, thankfully. The old 6.0-litre unit was way too muffled for a V8 sports sedan. Now, Holden has fit a bi-model muffler system for the first time which seems to be smoother in transition to the existing HSV setup. The mechanical valve in the rear muffler opens on start up and during moderate to heavy acceleration, giving off a deep and dirty V8 snarl and crackle.

Adding to this, Holden has developed a mechanical sound enhancer which helps introduce induction sounds into the cabin via a diaphragm and acoustic path. We doubt there will be many complaints about the new SS soundtrack, except maybe from a few neighbours. It sounds bloody fantastic – see our video below.

Out on the open road you can feel the 30-40kW power hike over the VF I, but it’s the engine’s new character that we notice the most. The LS3 is more responsive and seems more refined compared with the old L77 6.0L. It still uses the old-fashion pushrod valvetrain with a single camshaft, and maximum torque continues to peak at 4400rpm. However, with 570Nm, up from 517Nm, you instantly notice the difference in urgency as soon as you touch the throttle. 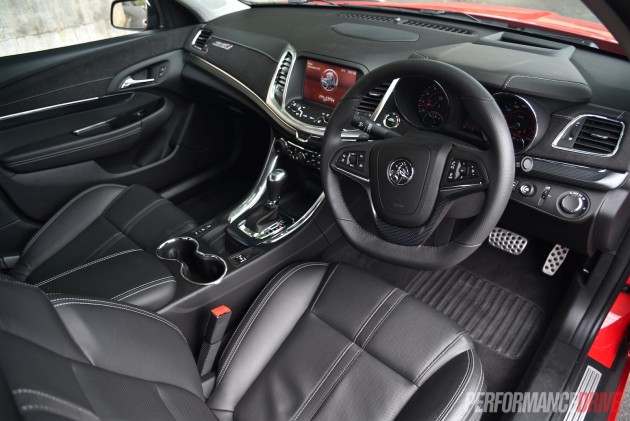 Holden was never going to go with a modern eight-speed auto borrowed from one of its GM counterparts, as much as we and probably it wanted to. So instead the last Commodore SS ever uses a fairly old “6L80E” six-speed auto. If it’s any consolation it is at the finest tuning level to date, with nice downchanges, and paddle shifters making it the most enjoyable and responsive auto the Commodore has ever been equipped with. It remains quite slow to upshift though, and doesn’t compare well to global standards for overall precision and gearing. Long-legged ratios do take away some of the LS3’s bursting enthusiasm. Along a mountain road you can play around switching between second and third gear, although, there’s so much torque it will pull through leaving it in third if you prefer.

Wider 275 rear tyres make it more composed and manageable compared with the LS3-powered Calais we reviewed earlier. But if you want fun and games you can easily kick the rear end out for controlled drifts and even smoking powerslides. The standard limited-slip differential hooks up every time, and in good time, letting no inside wheel slip waste away any of that huge power on hand.

Holden’s new FE3 sports suspension walks that fine line of forgiveness on poor roads and incredible stability and precision when you want to test the limits. Pure ride comfort is compromised somewhat on the highway, as it should be for an outright performance vehicle like this. It never becomes uncomfortable or jarring though. As before, the VF II Commodore is definitely the best-handling and most capable-handling Aussie sedan ever made. The Ford Falcon and Chrysler 300 are simply no comparison, especially in real-world twisty conditions.

Lastly, what about overall performance? Well, we timed a best 0-100km/h in 5.29 seconds, and a best quarter mile of 13.46 seconds. These numbers are excellent for a large two-wheel drive sedan, let alone one with an outdated auto transmission. With the manual option (and its launch control system), we predict these numbers would tumble by around 0.5 seconds. 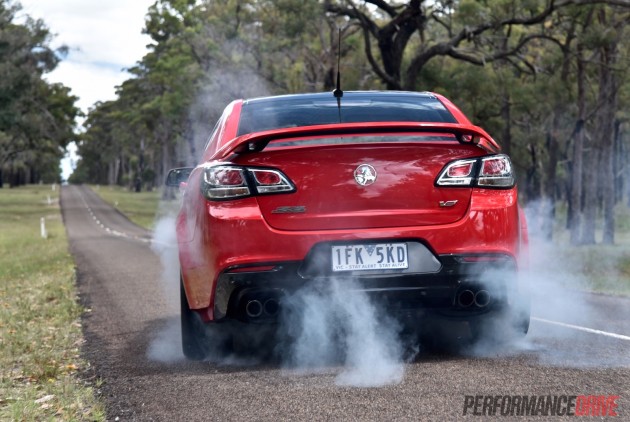 Holden, you’ve done a great job offering Australians big lovable sedans for decades. Some of us still love them, and most of us will probably miss them more after they’re gone. But, due to various social, economic, and political pressures, and the fact oil isn’t going to last forever, we have no choice but to be more environmentally conscious. This means the Commodore SS is now a special occasion car. It’s one to be left in the garage during weekdays and only cherished on the weekends. This point was made very obvious to us after noticing the average fuel consumption after a week was at a staggering 15.5L/100km. It’s a sad reminder of why these types of vehicles are going out of production.

If you’ve ever thought about buying a new Aussie icon to keep for decades, now is your last chance to buy. After sampling this LS3 SS we’re convinced it is the best and most complete Australian muscle car ever, and therefor the most tempting model of all.