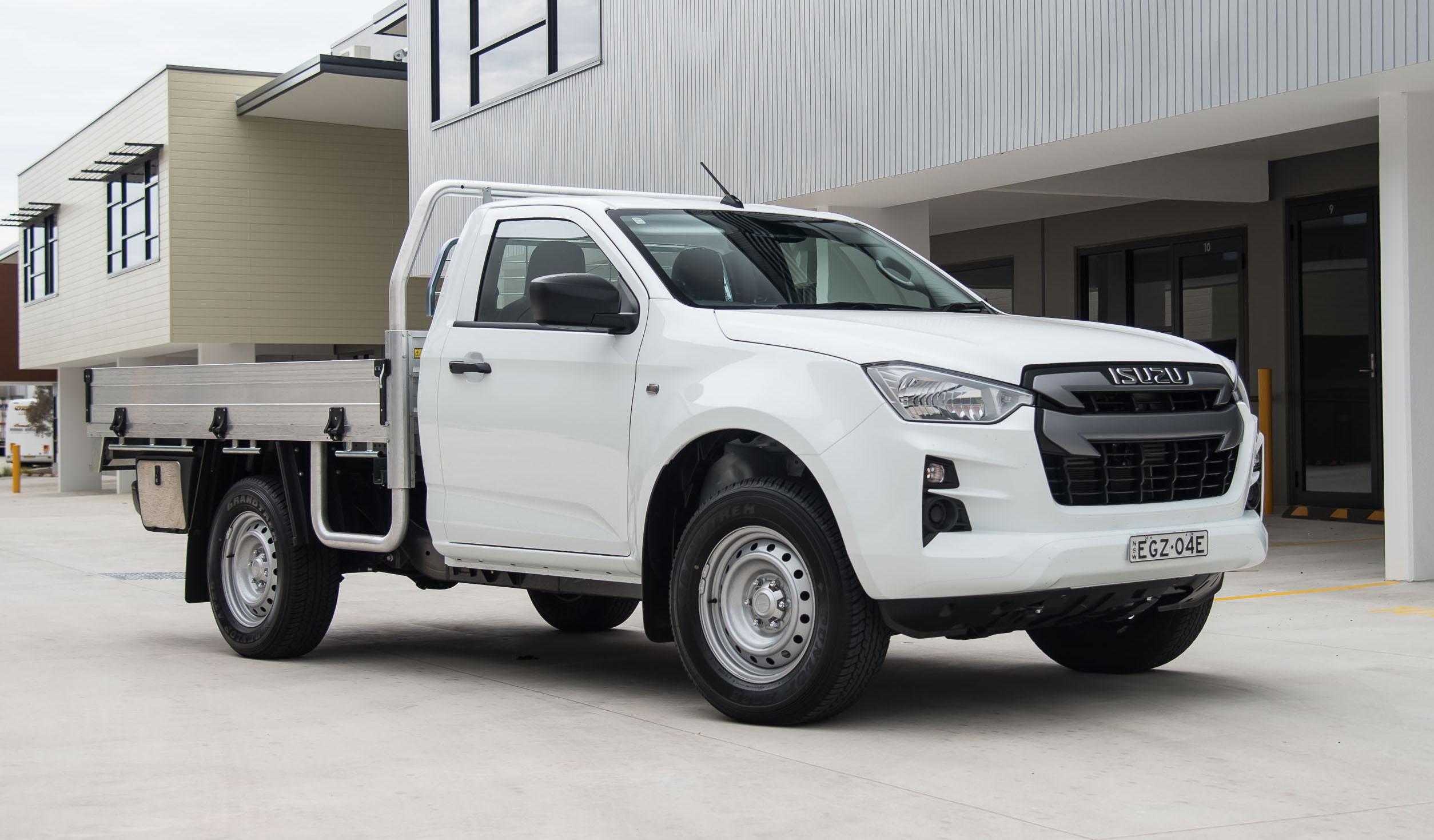 Here we’re checking out the bare bones 2021 Isuzu D-Max SX. Although it is the base model, it’s great to see Isuzu hasn’t skimped on applying all of its latest safety features, in-car technology, and the beaut new 3.0 turbo-diesel engine. 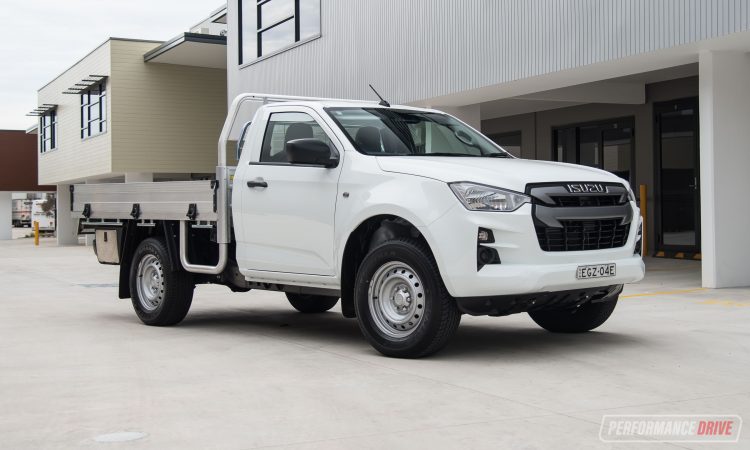 There is no more SX ‘low rider’. Instead, Isuzu only offers the High Ride version. That means it comes with chunky all-terrain 265/65 tyres and offers 235mm of ground clearance, as opposed to the 215/70 industrial tyres and 190mm of ground clearance on the old ‘low ride’ SX. It’s all part of a streamlined range for the 2021 model, with 20 variants overall (LS-U review here).

Prices have climbed for some variants, but that’s also due to increased equipment levels and a shuffling about of some models such as this base SX. The absolute most affordable model (as tested here) kicks off from $32,200, up from $28,600 for the previous base-spec (excluding on-road costs). 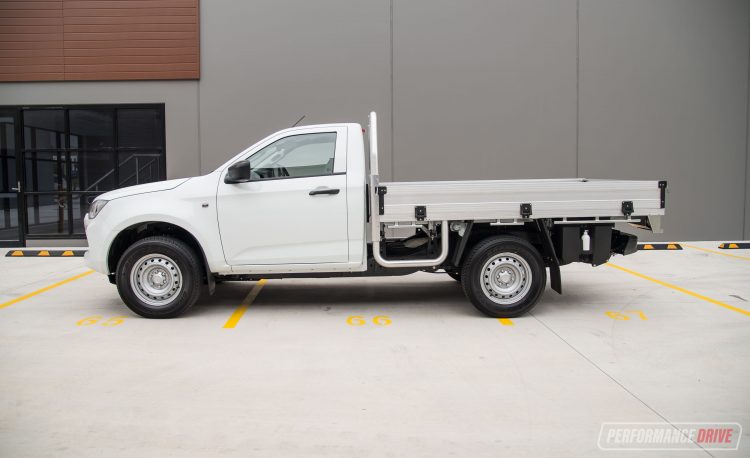 Despite being the SX the cabin presents a decent level of comfort and equipment. There’s a 7.0-inch touch-screen on the dash supporting Android and Apple CarPlay, and although it isn’t the new 9.0-inch unit fitted to upper models, it is a massive improvement over the previous setup. We’re annoyed by the volume buttons, instead of a conventional (and much quicker) twist knob, and some of the music menus are frustrating due to safety initiatives.

Yep, safety has well and truly inundated the new model so now it’s not possibly to browse radio stations unless the vehicle is stationary. We get it, touch-screens are, in our opinion, just as distracting as using a mobile phone. But cutting off the browsing feature is a bit over the top we think. Fortunately, the four-speaker sound system does crank out a surprisingly beefy listening experience, for this type of vehicle. 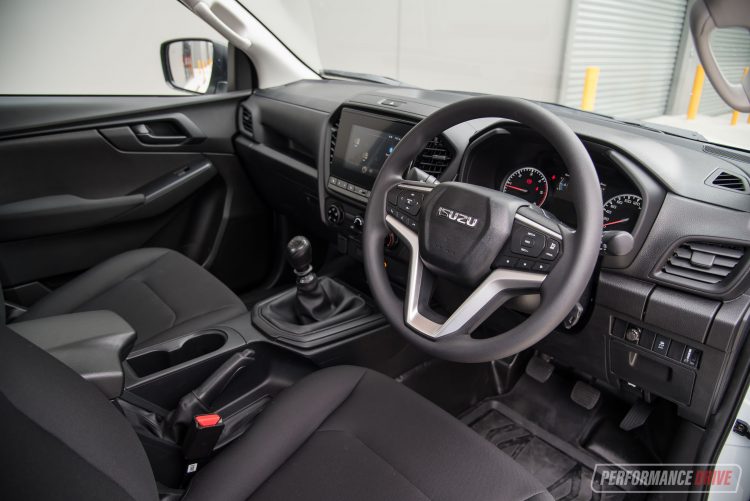 Cabin ergonomics have been improved, with storage and cup holders revised for better usability. The tray in front of the gear shifter is now able to cradle a phone, unlike the previous model, and the dual cup holders continue to be aligned in a north-south fashion but there seems to be a bit more clearance between them and the centre arm rest/centre box.

A potential issue with the cup holders is that they are much deeper than before. So if you’re a coffee drinker and stick with a small or medium size, the cup lid could be the only thing stopping the cup from dropping further in. Gratefully, pull-out cup holders from the dash continue from the previous model. These are more suited to shorter cups or bottles. 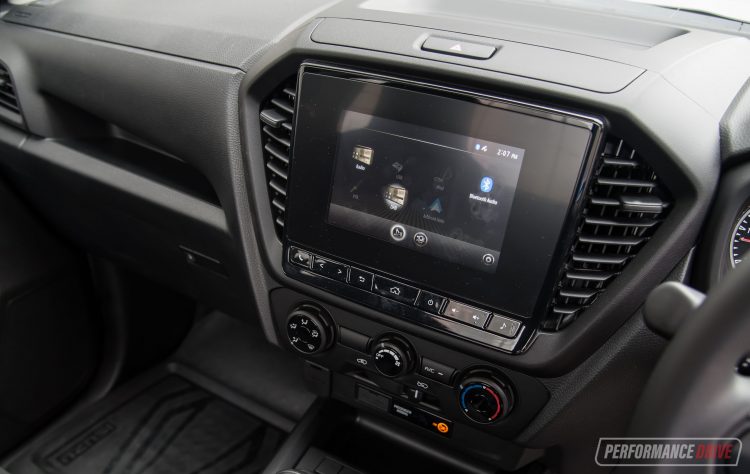 Another element that really helps to improve overall comfort, for the driver at least, is the introduction of a tilt and reach steering column adjustment. Now you can pull the steering out towards your chest, if you need to. It also seems to compress further in, which is no doubt a benefit for lankier drivers. As a result, we had no problem finding a good driving position, and this can help to reduce fatigue when spending long hours behind the wheel.

The SX continues to feature a full vinyl floor so you don’t have to worry about getting it all mucky. This test vehicle also showcases genuine thick rubber mats, which are moulded to suit the floor design, and there are plenty of hard-wearing surfaces including a plastic steering wheel. In other words, this machine is ready for working long hard days, in all kinds of conditions.

Speaking of working, the genuine aluminium tray features quality, rattle-resistance latches, and stretches 2550mm long. It also offers an impressive payload capacity of 1305kg. Add in the 3500kg braked towing capacity and you’ve got yourself one load-hauling machine. 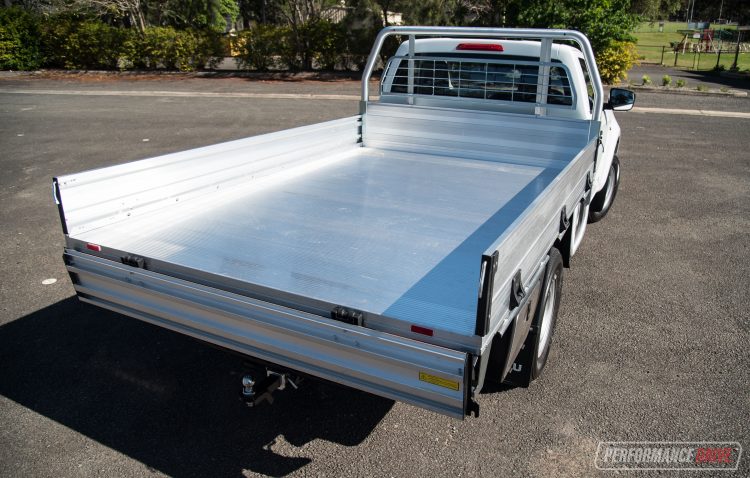 Isuzu says the new D-Max uses a heavy-duty three-leaf rear spring setup, which is apparently superior to many rivals. Most rivals we’ve tested, including the HiLux and Ranger, feature four- or five-leaf arrangements. Nonetheless, some tuning enhancements for 2021 have improved unladen ride comfort, noticeably.

Obviously a one-tonne ute is designed, primarily, to haul loads. Comfort would be even better with some weight in the back. Compressing the leaf springs also changes their shape from the initial arc position to a flatter position, which means they tend to rebound more gradually. Changes to the geometry have also brought in an extra 30mm of wheel travel for increased absorption range and articulation. 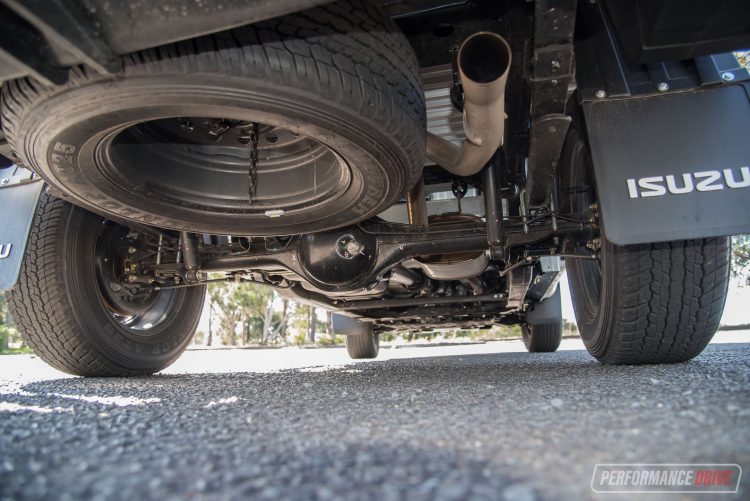 Over our usual test drive route, which includes a very bumpy and corrugated section of worn bitumen, the new model behaved well. And that’s with no weight in the back. There is some bounce, understandably, but a level of control and stability is maintained. The revised front double wishbone setup has been designed to reduced body roll, and the stabiliser bar, now 34mm thick, up 5mm, further adds to this effect. It turns in well, and there’s an adequate level of feedback communicated through the steering.

The steering does require a fair few turns from lock to lock though, which can get tiresome in urban and city conditions. But even worse is the manual transmission’s first gear ratio. It is just far too short. Considering the new engine develops more power and torque, we think it could easily pull through a longer ratio. Obviously there is more torque from a shorter ratio, but we just can’t think of a situation where anyone would need such tractor-like gearing. After all, you’d just end up in wheelspin if things got really serious, not having 4×4 and so on. 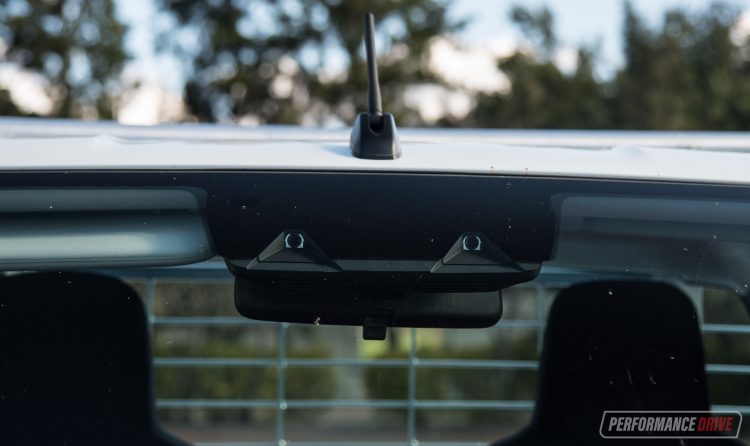 Isuzu has made huge progress in active safety, almost too much progress. Isuzu’s IDAS suite (Intelligent Driver Assistance System) comes standard, across the range. It includes a whole heap of technologies, most of which communicate with the on-board 3D stereo camera provided by Hitachi. The entire system also uses Bosch components and electronics. Autonomous emergency braking with turn assist, along with lane departure warning and emergency lane keeping (ELK) with automated steering assist, road sign recognition, and blind-spot warning all come as standard.

We have an issue with some of these systems. They are great to see, especially on such a rudimentary workhorse, but it feels like they need further calibration. The lane departure warning and autonomous emergency braking systems are way too intrusive. Even in the most relaxed setting, you end up with constant warnings and buzzers in city conditions. It can drive you mad.

You need to be stopped to turn them off, too, and you get about 1 second to select the menu from the instrument cluster until it automatically disappears. Don’t get us wrong, it is excellent to see this stuff here, but we think Isuzu needs to fine-tune the setup. It’s almost as though Isuzu has just walked into Bosch and bought an off-the-shelf package, without actually testing it for this vehicle and in the real world. 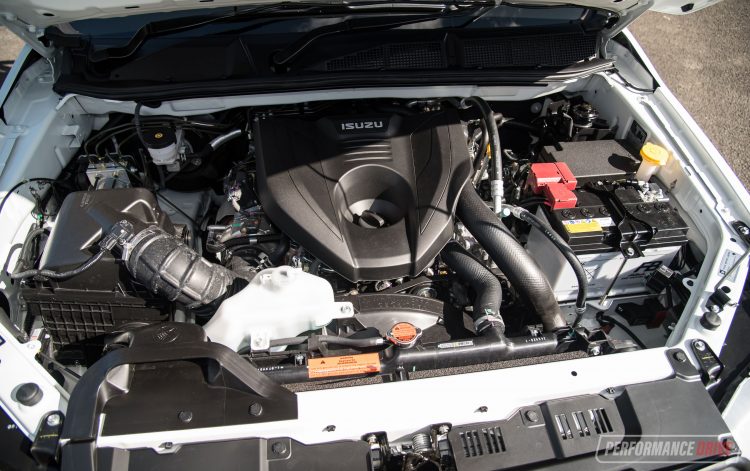 As for the new 3.0-litre turbo-diesel engine, it is fantastic. It’s an evolution of the old 4JJ which has been around for donkey’s years, only now it produces class-rivalling power and torque. You have 140kW and 450Nm on hand. This has caused the official fuel consumption to spike a fraction, from 7.9L/100km in the equivalent predecessor, to 8.0L/100k for this variant. We average 9.1L/100km during our week-long test.

Across the 0-100km/h sprint we recorded a best of 10.40 seconds. That’s not as quick as the previous SX we tested a couple of years ago, which did it in 9.68 seconds. However, we put it all down to this manual transmission and the short first gear – the previous SX we tested was an automatic. With the auto option we’d predict a time of around 9.00 seconds. In-gear performance is great, with third gear easily doing the job in most circumstances. 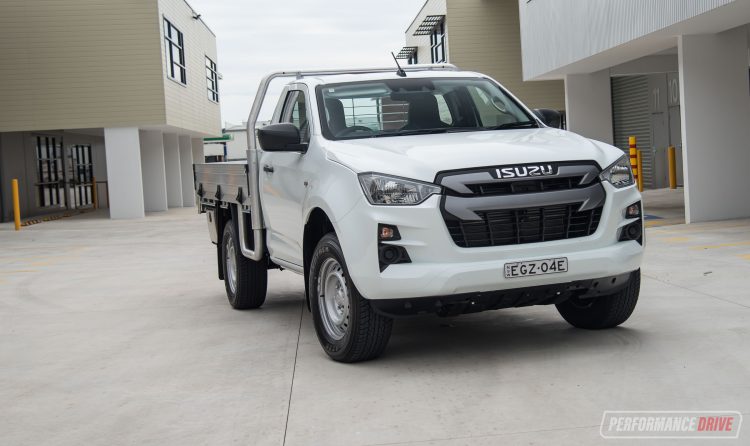 The SX is a hit with fleet buyers and small business owners because it is just such a dependable and durable tool. Now is the time to upgrade though as the 2021 model brings in some much-needed improvements in the areas of comfort, safety, and powertrain performance. In-cabin tech has also stepped up to passenger car standards. Our recommendation is to go for the auto if you can, as this manual can be very tiresome.