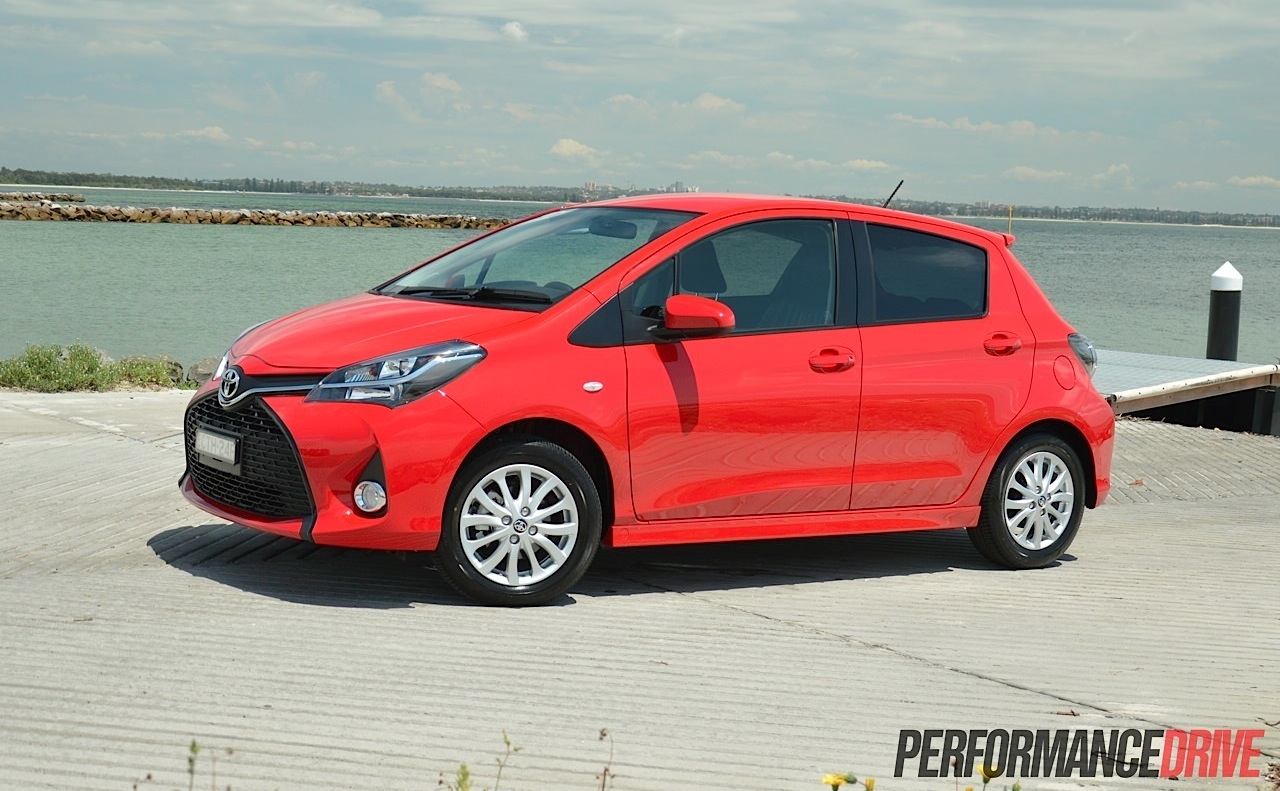 Australians have and always will love Toyota because of its price, build quality and longevity. This appreciation from consumers has asserted Toyota’s dominance of the global rankings for years now, and it doesn’t look like it’s slowing down anytime soon. The baby Toyota, the Yaris, has been sold 186,000 buyers since hitting showrooms in late 2005, making it one of the most popular vehicles in the competitive compact segment. 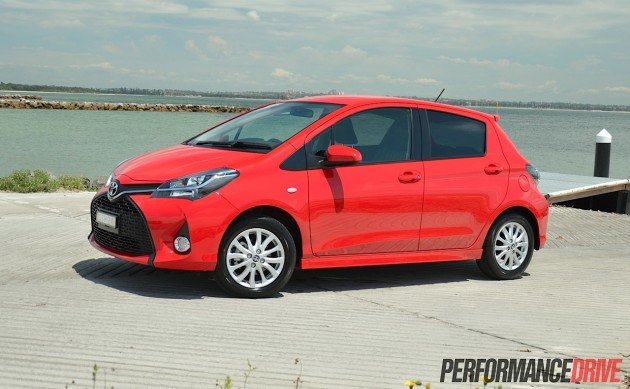 Now the competition has stepped up its game, with the Hyundai i20, Ford Fiesta and Mazda2 all keen to take the crown, the segment is as tough as ever. Toyota has given the Yaris a minor facelift for the 2015 model, and thrown in a range of new features, but are they enough to make the Yaris the top-dog?

Prices for the base model Yaris Ascent start at $15,690, packaged with features like 15-inch wheels, a 6.1-inch touch-screen, cruise control and a reversing camera as standard. It’s powered by a 1.3-litre four-cylinder petrol engine. The mid-range SX, priced from $17,790, is powered by a 1.5-litre four-cylinder and for $400 more than its predecessor, Toyota says you get $1000 worth of extras including fog lights, side privacy glass and new wheel covers.

As for this model, the ZR, prices start at $22,690. It comes bundled with new alloy wheels, LED headlamps, a new bodykit, and Toyota Link with a range of navigation and smartphone apps. The ZR is available only as a five-door automatic. 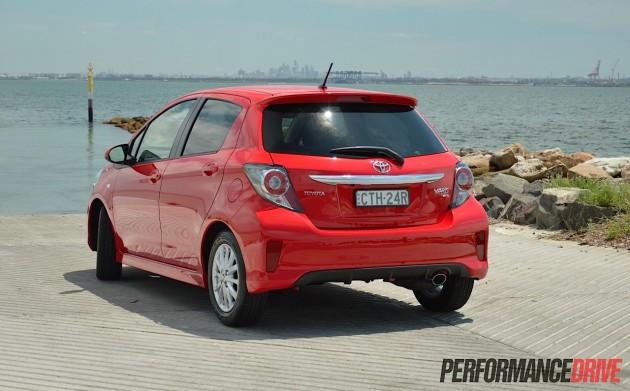 The design of the car is an undeniable upgrade from the previous Yaris. Whilst style remains a completely subjective beast, we don’t think there are many people that will deny the new aggressive and funky styling of the updated front grille and headlights. The rear, however, may be a little bit bland for some prospective buyers as it offers very little in the way of character, despite the small sloping spoiler. The round and softer angles have been given the sack by Toyota’s design department, and it is sure to be a hit with younger buyers, giving a little bit more credit to the little Yaris’s road presence over the previous model. The way the chrome from the front grille continues through the headlamps gives you the impression that styling was not a last-minute copy and paste job from the previous generation.

Sitting inside the cabin it is genuinely hard to believe how much space the Yaris offers in a car of this size. Even the six-foot-plus members of the PerformanceDrive team were able to sit in the back with a reasonable amount of legroom. It’s not a long wheelbase limousine, but in a car this size, it’s a definite pleasant surprise. Toyota has increased the boot space in the new Yaris by 25 per cent, meaning there is 286 litres of storage. The rear seats fold down, not flat, but create enough space for bulkier items like surfboards and sports equipment. The Yaris has not taken a step backwards in terms of practicality for the new model, that’s for sure.

The quality and feel of the cabin is one of the few disappointing aspects of the new Yaris. Sitting dangerously close to $23,000, the ZR offers a fairly cheap-looking interior compared to some of its rivals at this price point. It is, without a doubt, what you’d expect from the interior of a Toyota, but some potential buyers may not be too thrilled with its basic approach. Toyota has thrown a lot of new gear into the ZR, and the multiple tones and textures in the cabin add some excitement. The gear lever looks outdated though, with its basic chrome stalk, and the plastic faux carbon fiber on parts of the dash have a cheap finish and feel, as well as being easily scratched and marked.

Thanks to some insulation tweaks, the cabin is notably quiet and gives you a chance to enjoy the six-speaker sound system. Toyota has a habit of incorporating aftermarket-looking stereo/infotainment units into the dash of its cars, but it has well and truly picked up its game with this new system that fits seamlessly into the center fascia.

Tech-savvy customers will be happy to use the 6.1-inch unit, which is capable of downloading navigation, and weather and roadside information. It offers full smartphone connectivity with voice commands, which, with some delay, work reasonably well. The infotainment screen doesn’t have the same flow or ease of use as some of its competitors, with some of the touch buttons still too small or hiding in a corner. As well as this, the quality of the rear review camera isn’t as clear as other systems, and has no rear parking sensors. Overall, the cabin is a basic approach that might leave some buyers questioning what $23,000 can get you in 2014-2015, but there is no denying its practicality and ease of use. 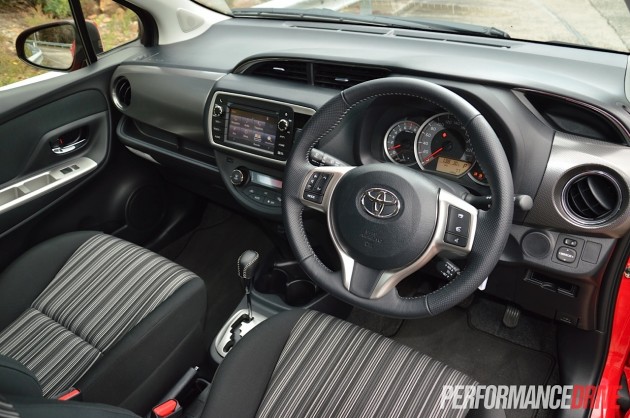 The Yaris ZR has had several chassis and suspension upgrades from the previous generation, and the overall feel is that the car is sharper than the version it replaces. The bodyshell is noticeably more rigid and is combined with retuned suspension to make it sportier than ever. The only problem is the Yaris doesn’t offer too much in terms of driving pleasure to begin with. The steering feel is incredibly light, and even at speed the driver does not receive much in the way of feedback from the wheels. This is partly due to the puny and unresponsive 175/65 tyres.

As a driving machine, the Yaris lacks pedigree in comparison to a Ford Fiesta for example, which offers the driver much more in the way of responsiveness and fun factor. The Yaris takes corners at speed relatively flat, but as you continue to push, the weight, lack of suspension and tyre precision and understeer invite themselves around and ruin the party.

Fuel economy has always been a big selling point for Toyota, having attracted many buyers in the past on its incredible reliability and economy. The official government-regulated test claims the Yaris drinks at a steady 6.3L/100km on the combined cycle. During our time we weren’t able to match this figure, sitting more around 7.0L/100km or higher.

The engine itself is getting a little bit long in the tooth now, and the four-speed auto transmission it’s connected to doesn’t help to keep fuel consumption down, with the engine forced to continue up the rev range before the transmission steps in to provide another cog. It’s not exactly segment-topping for economy, especially when you consider Ford’s 1.0-litre EcoBoost and Volkswagen’s fuel-sipping Polo range. At higher revs the engine sound manages to dominate the cabin as well, and not with an enjoyable engine note.

As a city runaround, which is what this car is all about, it’s hard to imagine a customer will be unsatisfied. It is more difficult for us to type this sentence than park the Yaris, which is made even easier with the rear-view camera as standard on all models. Being the smallest car Toyota offers in Australia, the Yaris will cruise through all of the urban obstacles the city can throw its way, and it offers a reasonably comfortable ride. 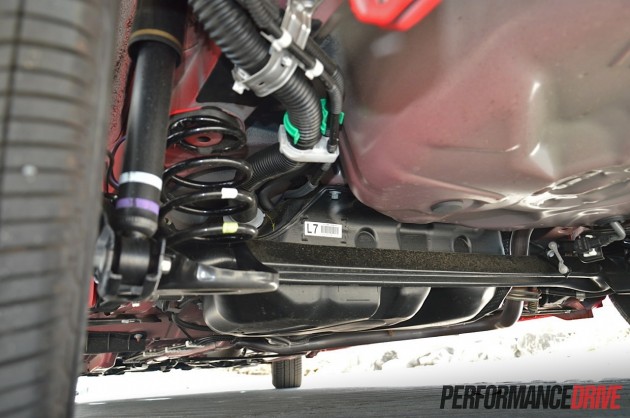 Toyota isn’t the world’s largest manufacturer by chance, and the mechanical and aesthetic and technological changes made to the 2015 Yaris ensure that there won’t be a shortage of demand any time soon. The design of the new model has created a more dynamic and exciting look, which will appeal to a younger demographic that may have viewed the old Yaris as a little boring. However, the Yaris shines when it comes to everyday practicalities and ease of driving. It’s a very effortless car to drive, which is what some buyers are obviously looking for considering this nameplate is the third-best-selling in the segment (so far this year, as of VFACTS figures).

There is one overarching problem with the Yaris we think, and that is solely the ZR badge. With a $5000 jump in price from the mid-range SX, it seems difficult to justify the money with a few exterior flares and some more tech inside. This is especially the case when you can almost enter another market segment at that price, where more space and performance are presented. If you’re after pure convenience, reliability, and functionality in a compact hatch, we’d suggest going for the Yaris SX. If you’re after a sports hatch, you should glance over in Ford’s or Volkswagen’s direction. 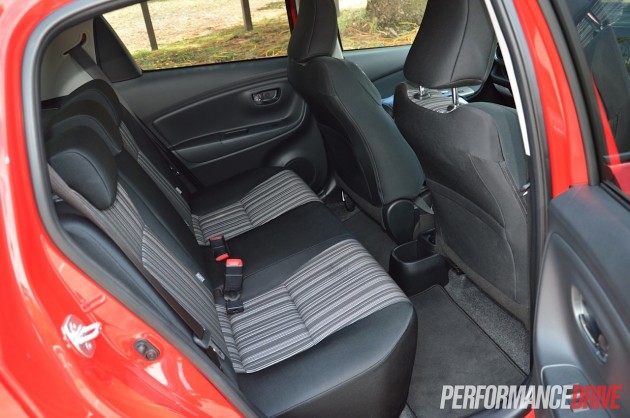