Kia plans on unveiling a new 2012 Kia Rio B-Spec race car at the 2011 SEMA show next month, ready to enter the B-Spec racing series in the US. 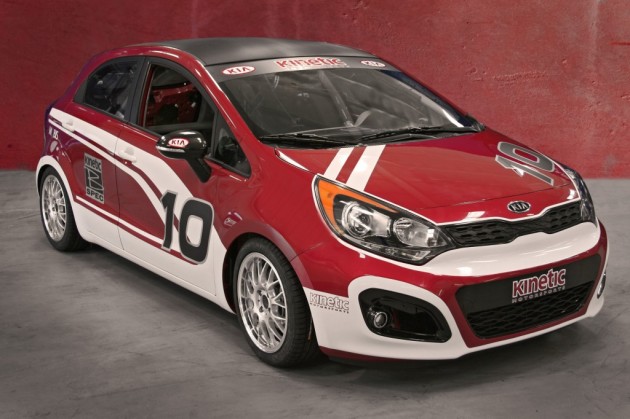 With the unveiling of the Kia GT Concept last month, Kia has announced it is interested in providing products for the performance and sports car enthusiast. And what better way to introduce the new theme than to present a race-ready package like this.

Official details of the 2012 Kia Rio B-Spec race car are yet to be revealed. It is likely however that it will be engineered and certified for racing. This means it’ll get a full safety system and roll cage, as well as racing bucket seats.

Mechanically, the 2012 Kia Rio B-Spec car will likely feature a standard-ish 1.6-litre four-cylinder engine producing 103kW of power. Unlike the road car though, the B-Spec will feature race-ready suspension and a revised tyre and wheel package.

It’s always great to see manufacturers getting being these types of one-make series cups, as it provides us performance enthusiasts with a possible and accessibly avenue for race track fun.

Pricing of the Kia Rio B-Spec and official details are expected to be released at the 2011 SEMA show, starting November 1. Kia Motors America vice president of marketing and communications Michael Sprague recently said,

“Outstanding value has always been a foundation of the Kia brand, and with the rapid development of the Kia Racing program and the launch of the 2012 Rio 5-door we have a unique opportunity to introduce Kia to a new and passionate racing community by providing an affordable and great-looking race car that delivers best-in-class horsepower in the rapidly expanding B-segment.”

Stay tuned for more details on this, and plenty of other highlights of the 2011 SEMA show in a couple of weeks.