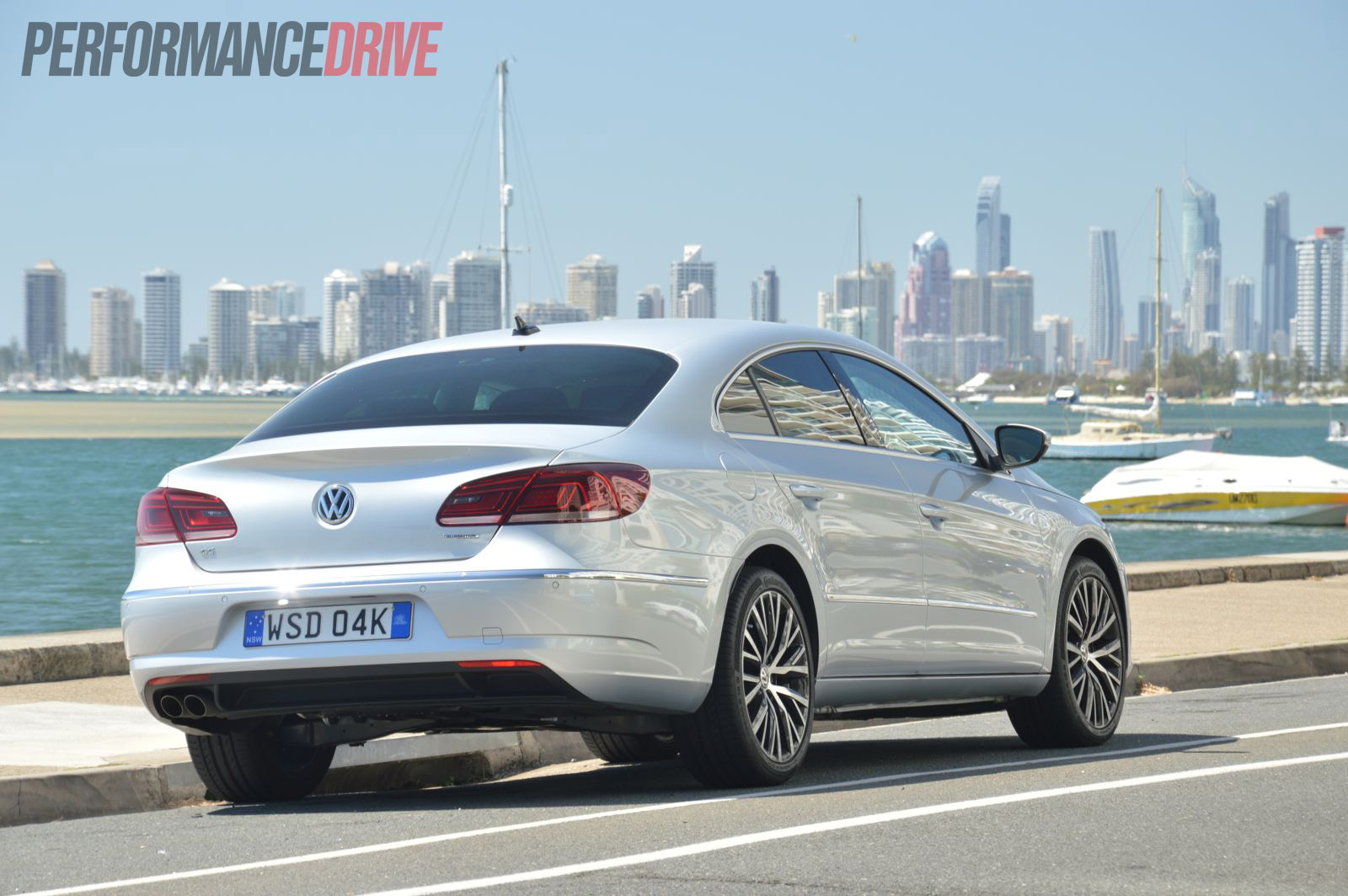 The 2013 Volkswagen CC is the most prestigious VW you can buy in Australia at the moment, aside from the Touareg SUV. This means it’s filled with all of the company’s latest cutting-edge technologies and pampering conveniences. It’s also wrapped up in a super-sleek four-door coupe body. 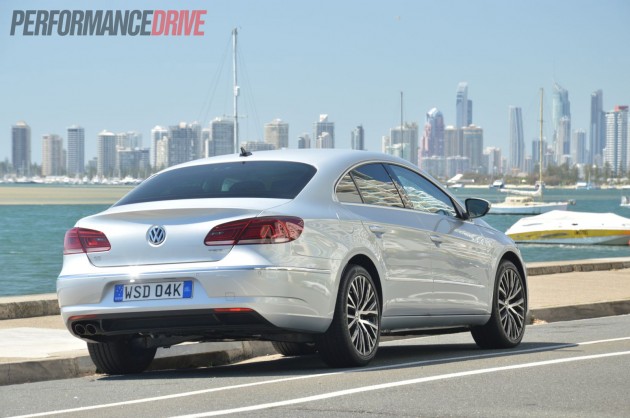 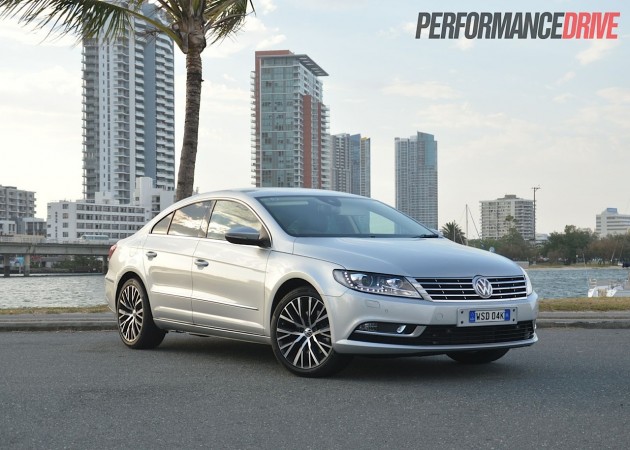 The Volkswagen CC is based on the Passat. When it was launched in Australia in 2009, originally as the ‘Passat CC’, it was one of the first vehicles to showcase the trendy new four-door coupe body style; a four-door sedan with a low-profile roofline and the curvy C-pillars of a coupe.

For the second-gen 2012-2013 model, Volkswagen decided to drop the Passat CC name and simply call it the ‘CC’. This gives you some indication of where VW is going with this. It’s aiming at luxury car buyers, and without the Passat name, those who may normally look past a Passat may now refocus their attention – not that any Passat is a shabby box on wheels to begin with.

There’s two variants in the Aussie lineup; the 125TDI and the V6. The V6 comes with a 220kW 3.6-litre matched to an all-wheel drive system, while the 125TDI comes with an eco-focused 2.0-litre turbo-diesel producing 125kW and 350Nm. The revised TDI engine sees the introduction of BlueMotion technology, which is basically Volkswagen’s sub-brand/mechanical philosophy for all things green and fuel efficient.

Prices for the base model 125TDI start from $54,990, while the V6 starts from $64,990. Both are only available with a six-speed dual-clutch automatic transmission.

For this test, we thought it would be fitting to take the CC 125TDI for a road trip from Sydney to Brisbane. Although we didn’t specifically focus on driving economically or put any special attention on watching our fuel consumption, the CC, as you can find out further down, was exceptional. It actually made the drive more pleasurable as we didn’t need to stop or worry about fuel. 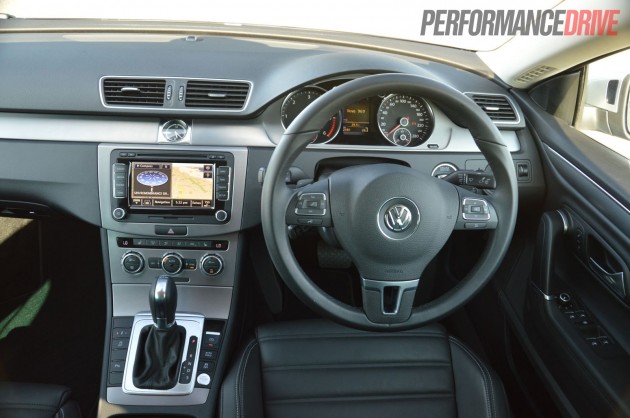 For the latest model, Volkswagen has filled the CC with loads of technologies, some of which are optional, such as the super intelligent Driver Assistant Package, including Side Assist and Lane Assist, Adaptive Cruise Control with Front Assist and City Emergency Brake (as tested). That all sounds like a mouthful, but it’s all, in our opinion, highly recommended. (See the ‘Design and Safety’ section below for more on what these systems are about and how they work.)

Aside from these optional safety gizmos, standard features for the 125TDI CC include leather electronically adjustable seats, a three-seat bench in the back (previous Passat CC had only two in the back), programmable door locking (auto and on take off and so on), dual-zone climate control with air quality sensors and pollen filters, as well as plenty of matt chrome and dark aluminium trimmings.

In the centre dash fascia sits a touch-screen multimedia unit with Bluetooth and USB/SD card compatibility. The unit also incorporates satellite navigation as standard, and a 30GB hard drive for media storage.

The standard stereo system produces decent sounds, however, some extra beef would be nice. A premium Dynaudio 600W sound system is optional ($2000) for those who want to get the most out of their music. An electric sunroof is also optional ($2000). 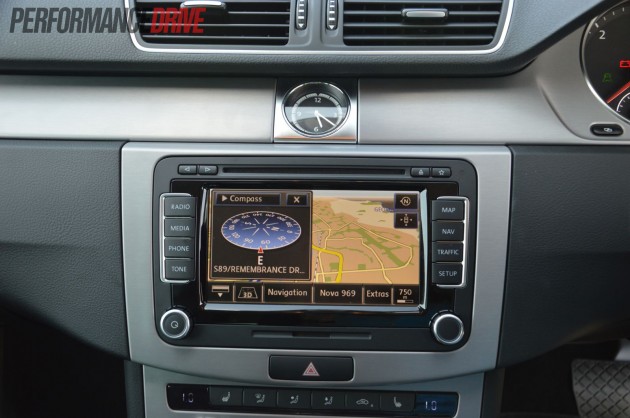 Up front, the seats, while slightly on the small side, are comfortable and provide that hunkered down driving position when lowered. During a long trip we found no issue, however, larger framed people might find them a bit tight.

In the back there’s loads of legroom. You clearly understand the whole notion of grand touring from back here. Fitting three adults across-ways is easily possibly too, but it’s the ample legroom that proves the CC is targeted at luxury car buyers, and perhaps even those who prefer to be driven. 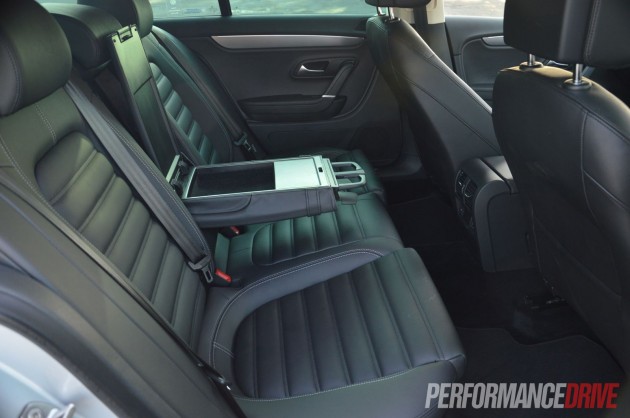 In the very back there’s a huge 532-litre boot, capable of swallowing plenty of luggage. And in our case, travelling with just two, the boot showed no issue taking on board our week’s worth. 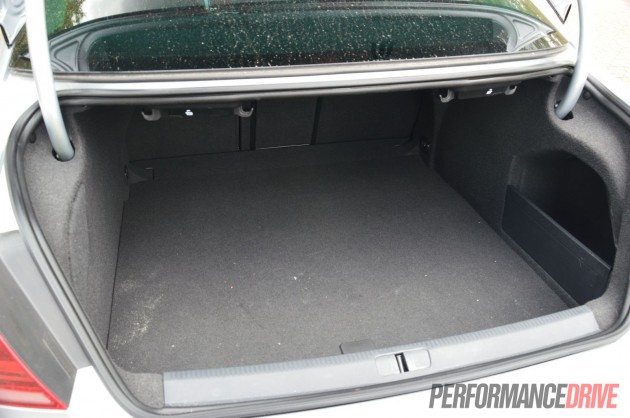 The standout for safety is obviously the optional ($3300) Driver Assist Program with Lane Assist and radar-guided cruise control. These systems really made our interstate journey a soothing drive. Upon arrival, we were actually relaxed and didn’t feel like callapsing straight onto a bed. Let us explain.

The Lane Assist system might not sound like it does much, however, it’s actually capable of taking over the steering wheel and guiding the CC within a lane, all by itself. It does this by using various sensors in the front end that constantly monitor the road ahead and ‘read’ where the white lines are. Under safe conditions, we let go of the wheel and let the CC do its thing to see what happens. We were amazed to see the steering wheel turn by itself.

Now this sort of thing is obviously not recommended, and not what VW originally intended to develop it for, although, you can appreciate the sort of safety this brings. It has the potential to basically eliminate your chances of crashing as a result of fatigue, or if you have a tendency to wonder between lanes. It never takes a strong hold of the steering wheel, and it can always be overridden with gentle pressure. It will also only control the steering for around 3-4 seconds before a buzzer is sounded for you to take over, or wake up (pictured below). 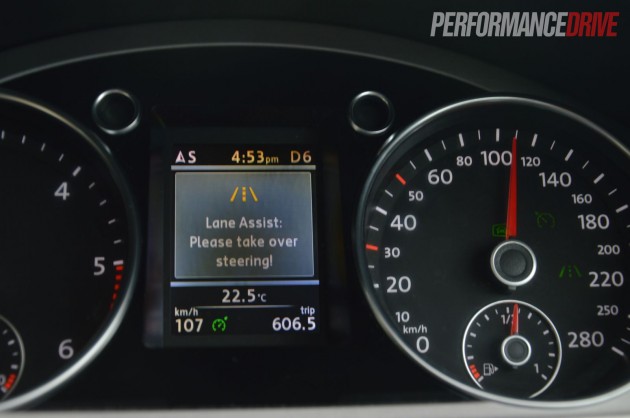 The radar cruise control is also capable of braking the vehicle itself if a hazard presents itself in front of you. The system works effectively, and will adjust back to your speed if you overtake a vehicle.

Even without the option pack, the CC is filled with lots of safety features, such as 10 airbags, stability and traction control, LED daytime running lights, auto wipers and headlights, and Driver Attention Detection.

ANCAP hasn’t specifically crash tested the CC, however, it has tested the Passat, on which it is based, and it has given it a full five star rating.

On the highway, the CC is a pleasure to live with. It’s feel very solid and secure all the time. The adaptive suspension, with Normal, Comfort, and Sport modes, means you can always find the right setting to suit your style, and to suit the road.

The 125TDI engine is quiet and refined for a diesel. Although it won’t blow your head off with sheer power, it pulls the relatively lightweight (1521kg) CC along just fine. With 350Nm of torque, overtaking is a breeze, and you find kicking down a cog is rarely required. It surges through the higher gears best. We timed 0-100km/h in 8.1 seconds, giving you an idea of its pickup and acceleration.

During our test we found some lovely mountain roads up in the back of the Gold Coast in Queensland. Twists and turns were confidently conquered in the CC, especially in ‘Sport’ mode, showing very little body roll. In terms of fun though, it’s more of a business suit than a set of gym clothes. 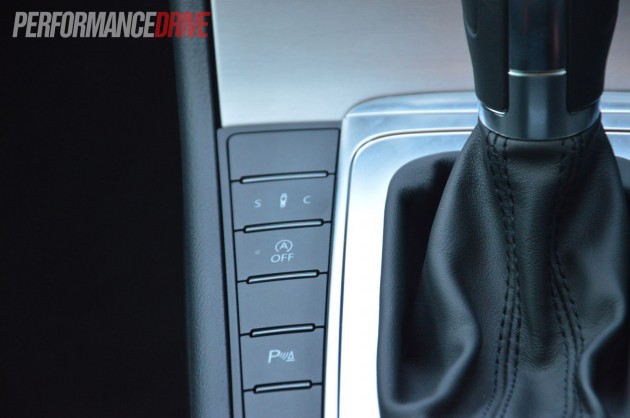 This type of ‘formal’ handling may not be particularly fun or exciting, but it gets the job done like a professional. This is mainly down to the steering, we feel, which seems quite heavy, like your turning a shovel in a bucket of thick custard. As a result, communication is a little vague and you aren’t 100 per cent sure the front wheels aren’t just about to let go. It takes a lot to provoke any sort of understeer though, you don’t have to worry about that. Again, it’s simply the Volkswagen style; highly capable but not especially engaging or exciting.

It feels convincingly capable when pushed, and the suspension is top-notch providing a good compromise between ride and comfort in suburbia, and stability and firmness in the hills.

Overall, you don’t buy the CC 125TDI purely for tackling mountain roads. For that, you need the barking V6 all-wheel drive version.

Road trips are, in our opinion, one of life’s greatest pleasures. However, these days a number of hindrances make it harder and more logical to simply take a plane, or holiday it up virtually by surfing the internet or watching TV. The CC TDI totally changes this and rekindles the road trip spirit that once bloomed before oil prices skyrocketed. 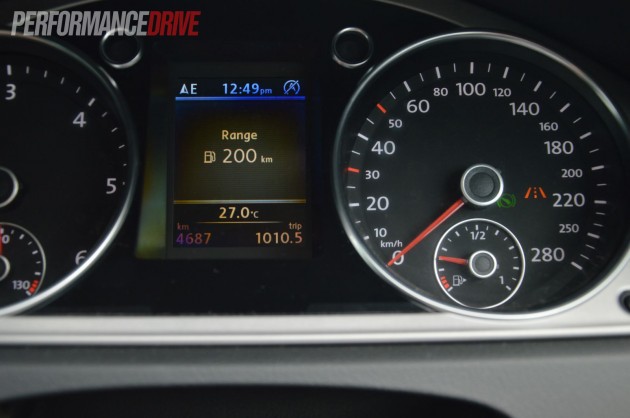 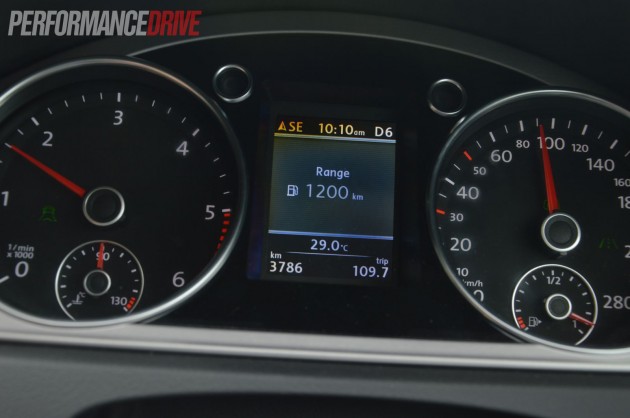 If you want a sleek and luxurious vehicle to live with everyday, and one that looks cool at night and smart for work, the CC 125TDI should definitely be on your short list. The fact that you can get 1000km to tank – we achieved 1010km and the trip computer still gave us a range of 200km (above) – means if you love driving, you’ll be able to drive and drive until your desires are content. 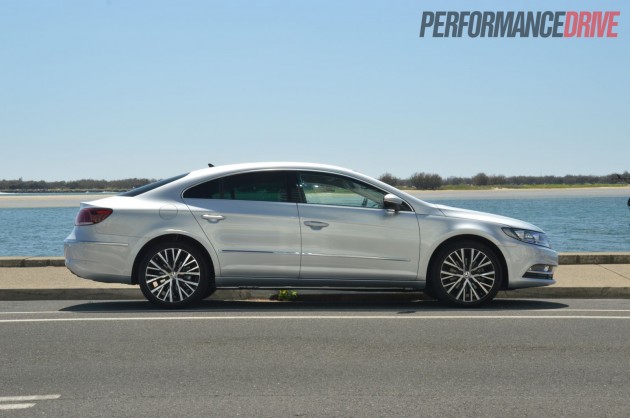