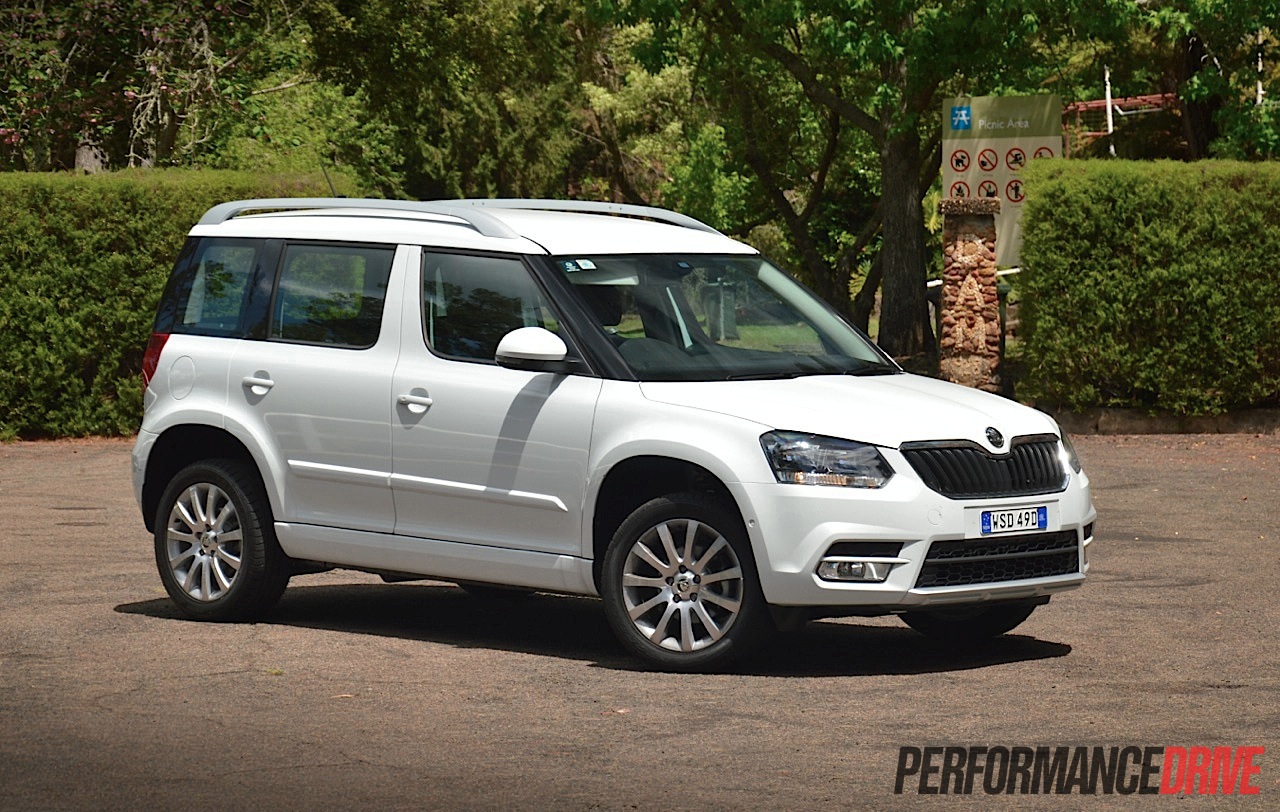 Volkswagen Group vehicles are often regarded as quality and precision-driven pieces of equipment but they are rarely referred to as fun-loving or adventurous in character. The Skoda Yeti comes in to try and change that. 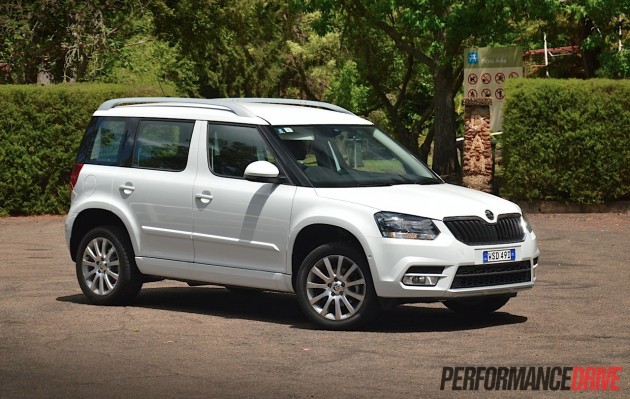 The Skoda Yeti is a fairly unfamiliar model in Australia despite being available here since 2011. So far this year the local arm has sold just 793 examples. Compared with mildly popular rivals such as the Nissan QASHQAI (3101), which has only been on sale for a few months, the Yeti has some catching up to do. The idea behind it is rather interesting though. It’s not an SUV and neither is it a crossover. It’s not a hatch and it’s not quite a van or MPV. Instead, it’s a combination of all of these personalities.

Underneath the latest edition – technically now the MY2015 – is Volkswagen’s PQ35 platform which is used to underpin the Volkswagen Tiguan and various other VW Group vehicles. The platform is ageing but it is infused with a modern independent rear suspension setup and a relatively lightweight set of materials. It also caters for all-wheel drive and front-wheel drive layouts, the latter of which we are testing here.

Skoda Australia offers three variants covering most bases, including the 77TSI (FWD), the 90TSI (FWD), and the 103TDI (4WD). Prices start at $23,490 for the base model 77TSI and top out at $33,590 for the 2.0-litre TDI diesel all-wheel drive. This front-wheel drive Ambition 90TSI kicks off at $28,290, which is a reasonable price in our opinion considering its multipurpose attitude and range of skills. 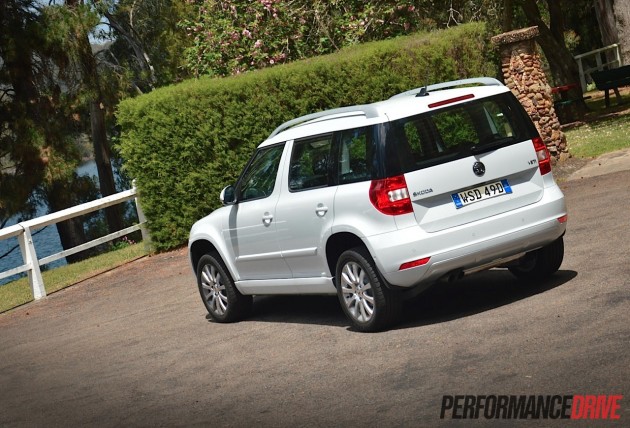 Families and adventurous buyers will love the sheer practicality of the Yeti’s cabin. With a tall ceiling that continues into the cargo area, you can get a vast concoction of sporting gadgets or holiday equipment packed into here. The rear seats are fully adjustable too, for slide and tilt, so there is incredible versatility. Headroom is not going to be a concern for anybody, even NBA players, and legroom is plentiful in the front and back.

For driving fans the seating position is far from engaging or sporting. It feels a little awkward and van-like, and the steering column isn’t adjustable for reach, only rake, which means it’s hard to settle in and find your comfort setting. The steering wheel tilts a little forward at the top as well, and the seat sits up high off the floor unlike in a hatch or sedan. But hey, this isn’t designed to be a driver’s cars.

You can certainly see Volkswagen’s influence on the interior fixtures and fittings. Up on the dash sits a touch-screen interface which is identical to the system used in various VW models. This is a good thing as it is responsive and presents decent graphics. Operational conduct and a general understanding of where everything is becomes second nature very quick. It’s able to read USB, iPod and SD card media, and with this Ambition 90TSI you get sat-nav as standard and the top-line eight-speaker audio system. All three variants come with a rear-view camera as standard.

Of course, the other benefit of sharing parts with Volkswagen is that you get VW’s fanatical build quality. All of the buttons and fittings are snug and feel nice to touch, and they feel strong and dependable, which is important in an active vehicle like this. The decor is mostly monotone and somewhat boring, but it is easy to live with and the materials seem durable.

In terms of practicality, the Yeti is excellent. You get a number of storage boxes and cavities for your things, a LED torch in the cargo area, bottle holders in all four doors (front doors are capable of holding 1L bottles), a sunglasses holder, and more storage boxes and unique hanging rails in the cargo area. Speaking of which, the cargo area measures 310 litres and can be accessed via an up-swinging tailgate. This volume can be expanded to a huge 1665 litres with the rear seats folded flat. 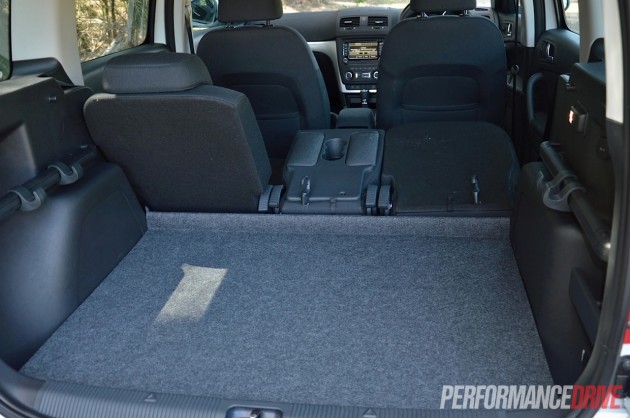 Despite a puny 1.4-litre turbo engine producing 90kW, it is a surprisingly torquey unit. Peak torque (200Nm) is available from just 1500rpm and stays with you until 4000rpm. Off the line it reaches the speed limit with jovial effort, with 0-100km/h coming up in 9.6 seconds according to our watch. Overtaking grunt is where you’ll call for more power. If you try to accelerate from 80km/h to 100km/h you might be a bit disappointed as it does take a while. It’s fun zone is right within the chunky low to mid rev range.

Along country roads it gallops along with reasonable energy. If you throw a few corners in there to change up the tempo, it can be quite an enjoyable drive in terms of powertrain capability. The turbo engine likes to surge and haul through the gears as opposed to revving right out, with a neat parp on the upshifts thanks to the DSG dual-clutch auto transmission.

When it comes to cornering and handling, the Yeti does possess admirable characteristics and traction. There’s a fully independent suspension arrangement underneath ensuring all four tyres are pressed onto the ground, even around bumpy corners, while the 225-wide tyres on this Ambition ambitiously and successfully claw for grip. An electric differential lock (EDL) for the front-wheel drive system adds more road-holding security, especially pulling away from tight and or slippery turns.

If you really push it, which is not something many buyers are likely to do in a vehicle like this, you can start to feel the top-heavy nature of the layout. Body control always remains high though and, as mentioned, grip never runs out, with no understeer and a planted rear end with no oversteer.

Skoda encourages its buyers to get out and amongst the wilderness with the Yeti, as depicted in its advertisements. The top 103TDI Outdoor model does come with four-wheel drive, however, even this mid-spec Ambition is prepared for mild off-road use. The same protection plates underneath as featured on the Outdoor model come on this Ambition. Ground clearance is also impressive, rated at 180mm for all three variants on sale in Australia.

Out in the sticks it’s a fun car. Knowing you can pack a family’s worth of camping equipment in the back and have room to spare for four or five passengers makes you want to get out on the weekends to explore more often. It’s an encouraging vehicle. We had fun playing around on some dirt tracks and kicking up some mud. With the locking differential it can be just as capable as a basic 4×4 SUV with open diffs, which is virtually two-wheel drive anyway. The ground clearance and steep approach angle will get you through most recreational areas with no trouble. 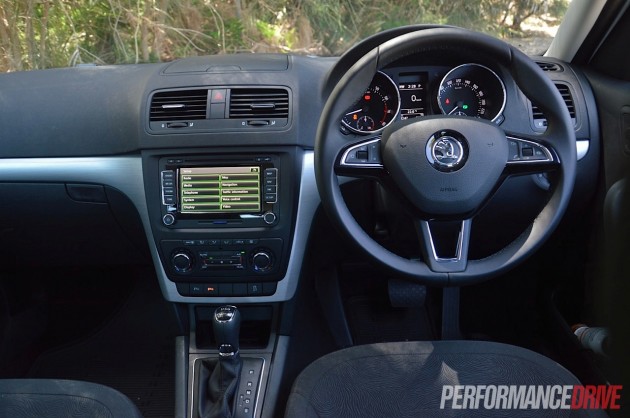 Like many Skoda models, once you peel back the strange exterior design you find a properly engineered German platform. It’s powered by German efficiency too, with an official consumption average of 6.8L/100km (we averaged 8.4L/100km). This isn’t the best part about the Yeti though. For us, the key attraction is the sheer practicality and versatility.

It can do so many things, and it does them all well. It’s a one-stop vehicle for young families or adventurous types, and it also has the efficiency and brand backing of one of the biggest auto manufacturers in the world. If you’re in the market for a small to medium SUV, there are heaps of models to choose from. Unfortunately, the Yeti can easily get buried under all of the popular rivals. We think it is worth keeping aside for your shortlist though. It could be the alternative you’ve been looking for.

CONS:
– Not the most attractive exterior design
– Interior can be a bit boring
– Sportier 4×4 variant with Polo GTI running gear would be nice… 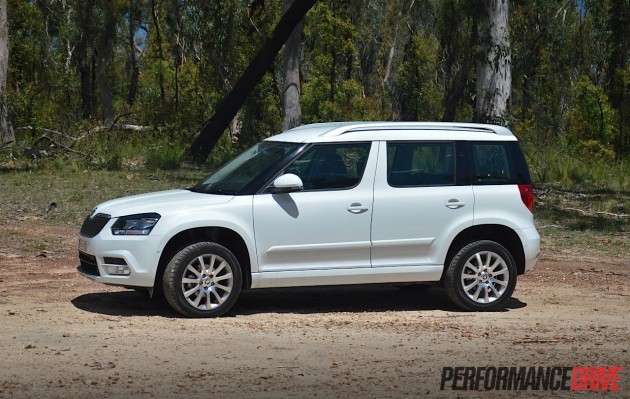