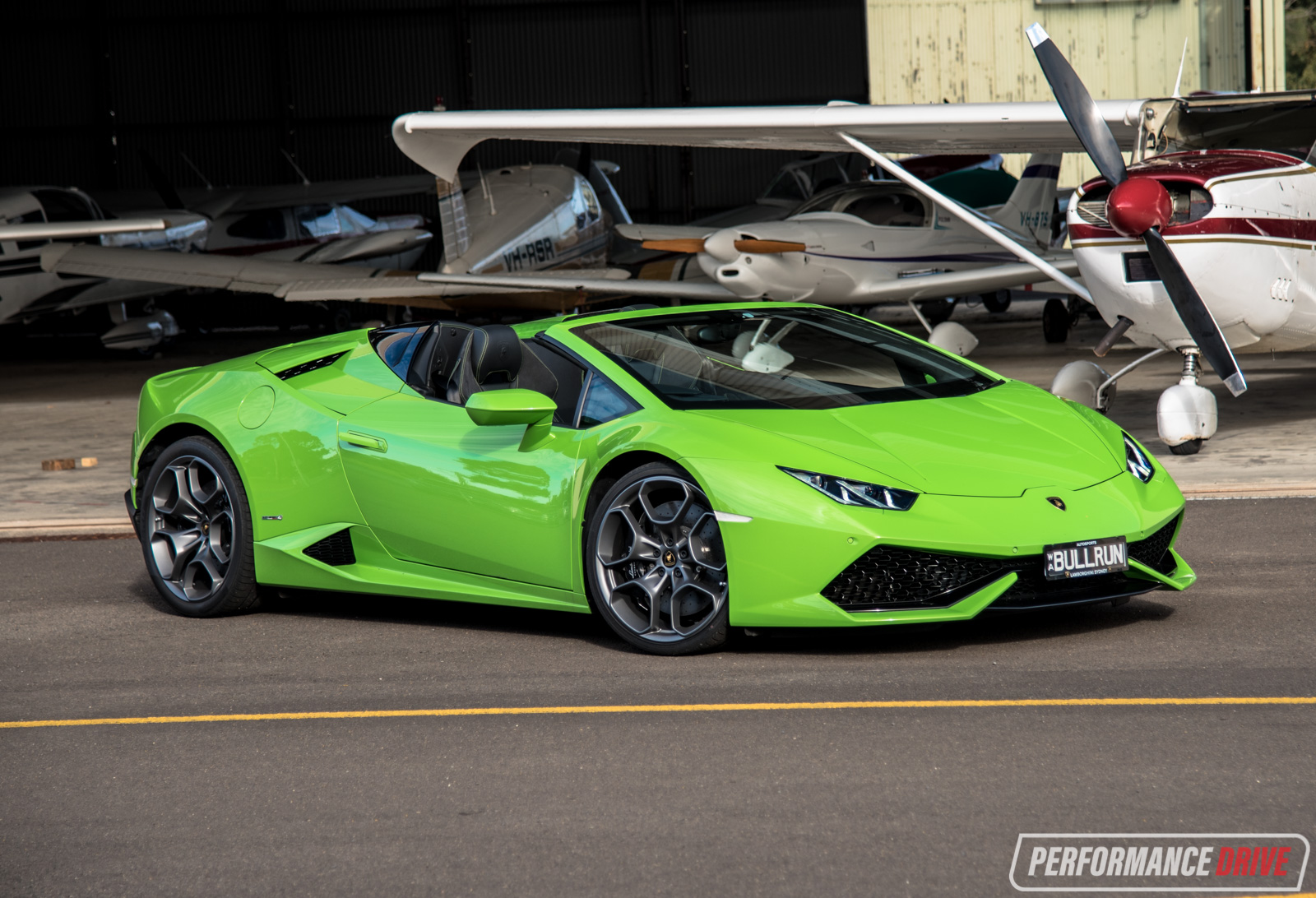 Imagine the sun spearing down onto your skin, your hair flailing wildly in the wind, and the glorious sounds of a full petrol-powered orchestra playing right behind your eyes. This could be your reality, with the Lamborghini Huracan Sypder. 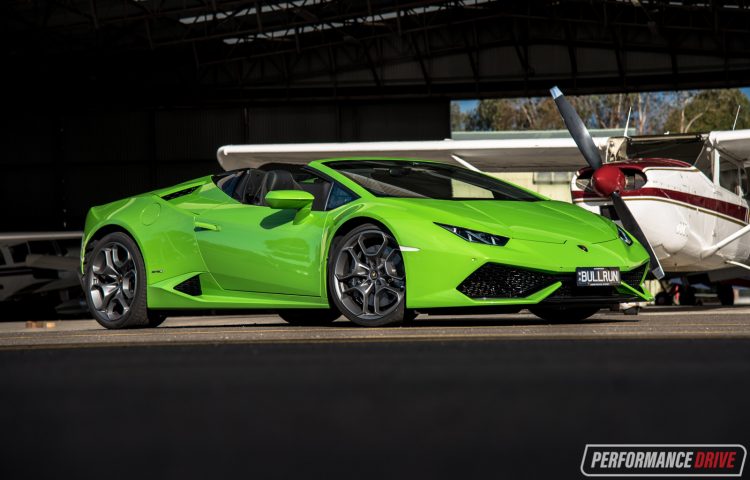 The Huracan (Spanish for hurricane) is the replacement to the old Gallardo. It’s the baby Lamborghini, featuring a 5.2-litre V10 engine against its big brother’s V12 (in the Aventador). This means it’s going up against the likes of the Ferrari 488 GTB and the McLaren 650S.

In drop-top Spyder form the Huracan is only available with the ‘LP 610-4’ powertrain, unlike the coupe which is available in rear-wheel drive ‘LP 580-2‘ form as well. This means right behind the cabin is a 5.2-litre naturally aspirated V10 producing the full 449kW and 560Nm. Audi, under Volkswagen Group parenting, helped with the FSI direct and multi-point injection system among other things, allowing for an ear-pinching redline of 9000rpm.

Now, there are many options buyers can tick for the Huracan. But this is a good thing because if you’re buying a supercar, chances are, you want it to be pretty darn exclusive. With an almost endless smorgasbord of colour and trimming options you can tailor the car exactly how you want it. This test car is coated in the bright Verde Mantis green, paired with black Alcantara seats, a black leather dash, and matching green stitching. It’s absolutely stunning, as many onlookers told us during our drive. 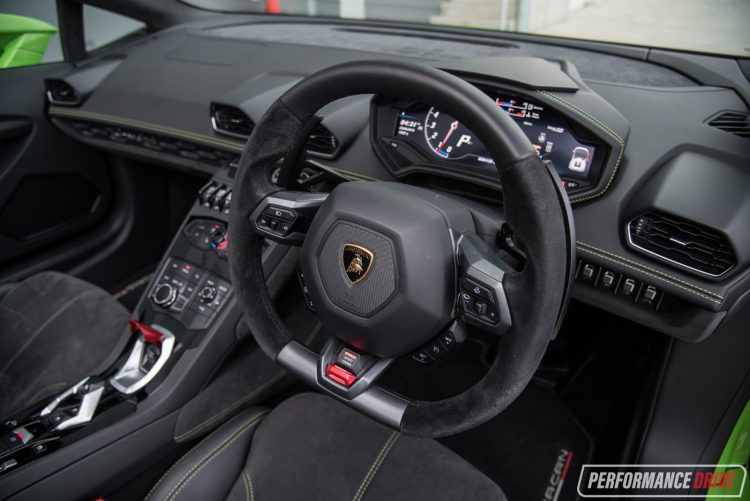 Speaking of onlookers, the Huracan has the ability to make you new friends. Every petrol station you stop at and every set of traffic lights, at least one person will smile or communicate with you to some degree. In fact, there’s almost always one person on each journey who finds the car so irresistible that they just have to make some kind of positive comment to you, even if it means winding down their window on the highway and yelling out ‘beautiful car!’ or something similar. It’s amazing that a car has such extraordinary power to influence human interaction.

Inside, the Huracan cabin is a combination of Audi-like build quality and technology paired with Italian design and sex appeal. All of the on-board media and connectivity is controlled via an MMI system on the centre console, taken from Audi. But instead of the typical LCD screen atop the dash, the screen is implanted into the instrument cluster. This does take some getting used to, however, after spending some time with it the thought of not having to take your eyes too far off the road does seem to make a lot of sense. Especially in a vehicle with this much potential. 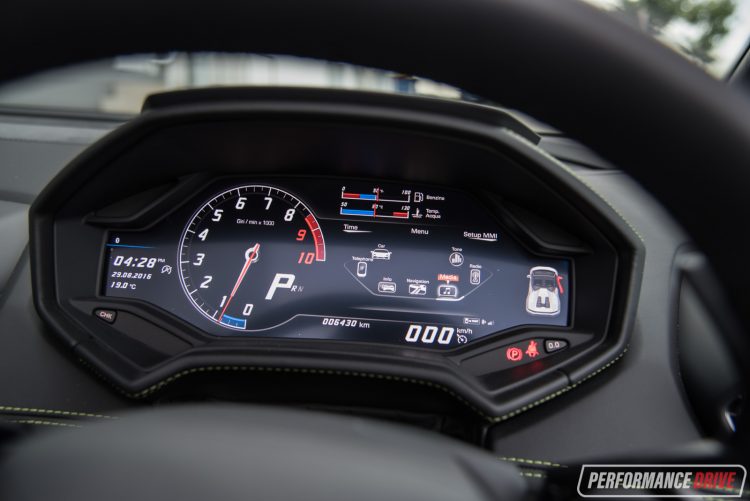 It’s highly configurable so you can display the full map for navigation, or a big rev tacho, or browse through the menus. From a passenger’s point of view and the initial wow factor, it’s superb and suits well with the personality of the Filippo Perini-designed body.

The Huracan’s seating position is very low, leaving your butt about 100mm from the ground. As as result, you do have to crouch right down to get in. This is where the Spyder becomes a little more practical in our opinion. With the roof down it allows you to simply step across and in as you don’t have to bend your neck under the roof. Obviously this isn’t going to be useful if you’re planning to park the car on the street for a long period. In the garage at home though or even at the office in secure parking it does make it less tiring getting in and out than the coupe. 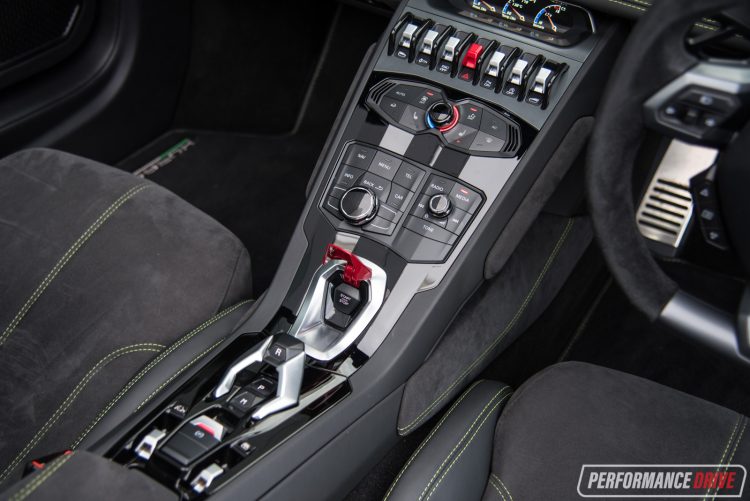 Once you’re slotted in all that matters is that jetfighter-style start button. First you have to lift the safety latch and only then do you have access to initiate the launch sequence. In an underground carpark or the garage, the Huracan start-up is awe-inspiring, addictive, and almost orgasmic. The V10 bellows and barks into life, idling high and loud, like a superbike only with much more bass and definition – to amplify this you need only hit the Corsa track mode as soon as you start up to open the exhaust to full noise. Just starting the car gets the adrenaline going and sends goosebumps trickling.

From there, the road is your oyster. In Strada (road) mode the seven-speed dual-clutch automatic transmission behaves just like a regular, well-sorted dual-clutch transmission. It’s smooth and well-mannered, changing into the ideal gears for the given situation. The steering is also easy albeit with plenty of communication and a nice weighty feel, while the throttle response can be likened to a normal sports car. In other words, you can forget the adage that supercars require arms like tree trunks and balls of steel to drive. This could be driven on a daily basis without any real sacrifice, apart from getting in and out as mentioned. 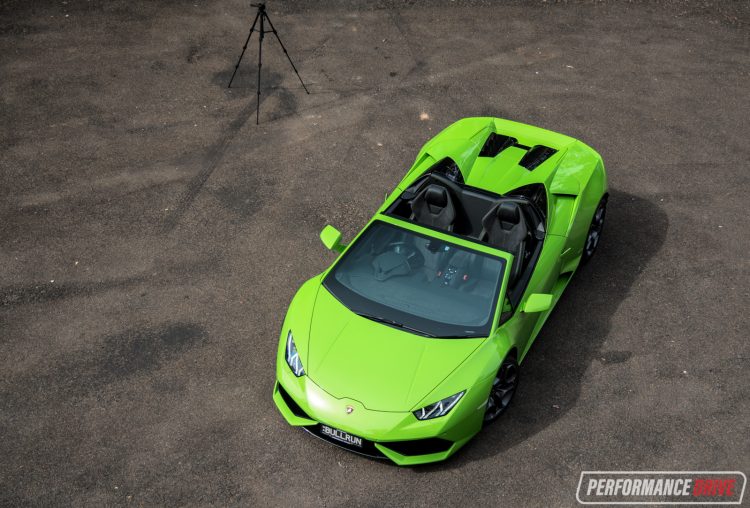 Flick it into the immediate mode, called Sport, and things get a little more serious. The idle is slightly higher creating a baritone burble. The gearchanges are a touch quicker and the throttle is a bit edgier, like it’s had a few espressos. The suspension is also firmed up and the traction and stability control are told not to respond and intervene as quickly.

In Sport mode you can explore the chassis’s unbelievable grip and flat cornering while experiencing some minor tyre slip. When pushed really hard – and we mean really hard – some understeer comes in to let you know you’re approaching the tyres’ limits. Being all-wheel drive also tips the handling characteristics more toward understeer than oversteer, just as most other AWD vehicles tend to do.

In the Corsa mode you better have had your espresso fix, times three. The car transforms into an all-new beast, like it’s had a four-pack of Red Bull. Every control is immediate and extremely sensitive, and the stability control is slackened right off. If you know what you’re doing you can provoke light oversteer with sheer momentum, however, as soon as you go anywhere near the throttle the all-wheel drive system hooks up and corrects everything quick smart. It’s in this mode that you can experience the awesome launch control function.

Aside from during launch control, called Thrust Mode, the gearbox requires complete manual shifting. It will bounce off the rev limiter if you don’t pluck the paddle, and this happens sooner than you might think as the V10 revs up astonishingly quick. Driving through a mountain road in this mode is pretty much like driving a racing car. The engine produces an almighty scream and the gearchanges, up and down, happen with the violence and speed of an F1 car. It’s amazing and an experience that’s hard to forget or beat.

Jumping onto the brakes is like pulling the parachute during a skydive. These carbon ceramic discs and massive calipers are your safety net and instantly and repeatedly confiscate insane acceleration and speed. It doesn’t matter how many times you’ve pulled the plus paddle these brakes grab the sensation of forward momentum and retard it, to the point where it can make your organs feel very uncomfortable. In fact, our VBox recorded a 100-0km/h stop on regular tarmac in just 32.96 metres. The braking capacity is just as impressive as the acceleration and handling. 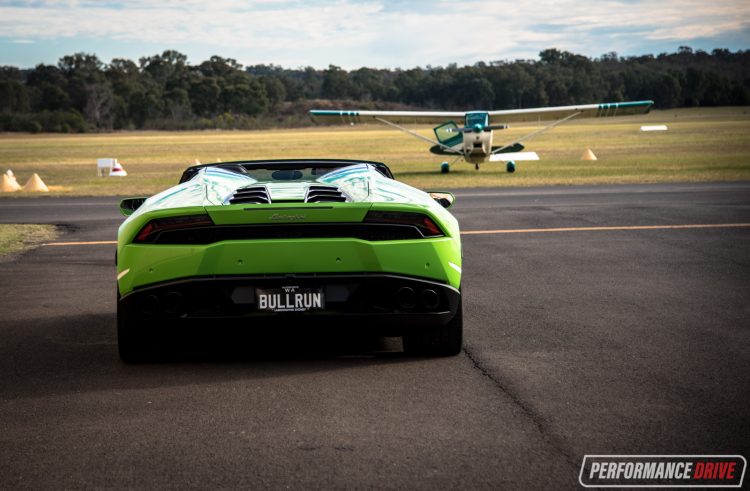 As we’ve said before in Lamborghini test drives, driving a car that’s this involved and this intense isn’t really about getting from point A to B. From standing and absorbing the striking exterior, sitting in the theatrical interior, starting the highly animated engine, and driving with all of your senses aroused; it creates a separate event. It’s not about transportation at all. And without the roof, it makes it all the more exciting. If it were our choice out of all of the Huracan models, including the rear-wheel drive version, we’d go for this Spyder every time.

Interestingly, according to our VBox, the Spyder is actually quicker than the lighter weight 580-2, and we put this down to the all-paw grip. On a private road we timed 0-100km/h in just 3.32 seconds, bettering Lamborghini’s claim of 3.4 seconds. Although the 580-2 is slightly more engaging to drive, particularly in terms of front end bite and rear end playfulness, we enjoyed the Spyder with the roof down even more simply because you get more noise and a heightened sense of occasion. Of course, the ultimate would be a rear-drive Spyder. Maybe one day…