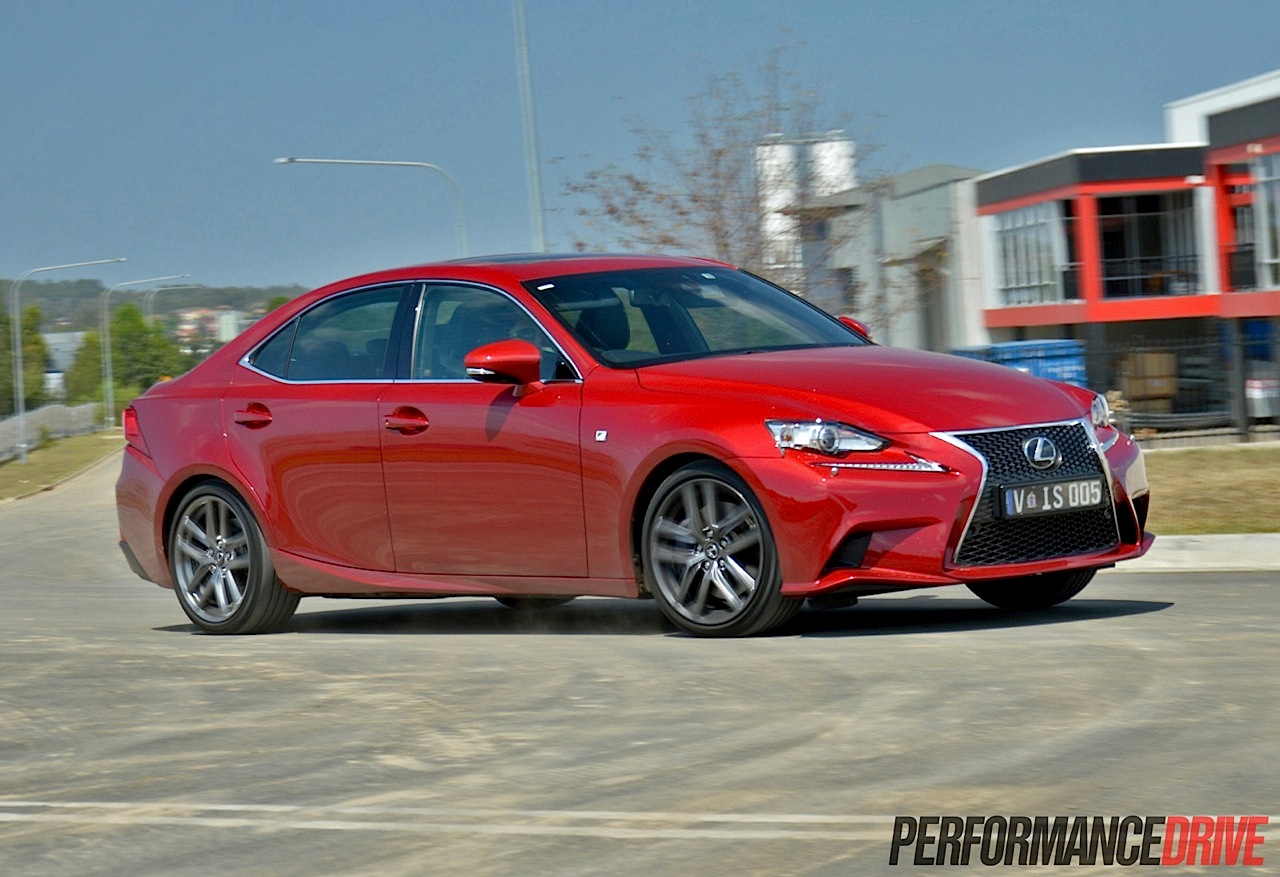 We loved the previous-gen IS 350. It offered sincere hard-edged V6 performance with the refinement and reliability of Lexus. A genuine win-win situation, in other words. With sharper looks, more advanced technologies, and a much-needed interior overhaul, the 2014 Lexus IS 350 F Sport could very well be the best premium sports sedan in the segment. 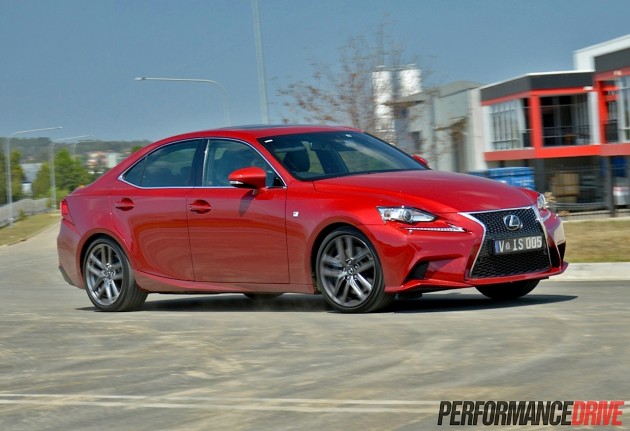 On the face of it, it certainly seems that way. The updated exterior design makes it as striking as ever, with hints of the awesome LFA supercar seen from some angles. The interior now has the ability to compete for and potentially claim the prize for the best interior in its class. And to top it off, the new model has been announced as one of the runners in the highly regarded 2014 World Car of the Year awards, nominated in two categories including the Design of the Year and overall Car of the Year.

So, what is the IS 350 exactly? Well, before you get to the knee-weakening, ear-massaging driving bliss known as the Lexus IS F, the IS 350 F Sport sits in as the appetiser. It’s the sports sedan for the executive and intelligent buyer who likes to get their hands dirty along some spirited roads every now and then.

It competes in the market with the BMW 335i, the greatest in this segment in our opinion, and one of the most advanced and the most powerful in this class, the Infiniti Q50. It also contends with the Audi A4, the Mercedes-Benz C-Class and the Volvo S60.

Aside from the IS F – which isn’t available in the new shape as yet – the IS 350 is the flagship while the F Sport sits in the middle of the 350 range. Prices start at a competitive $73,800. 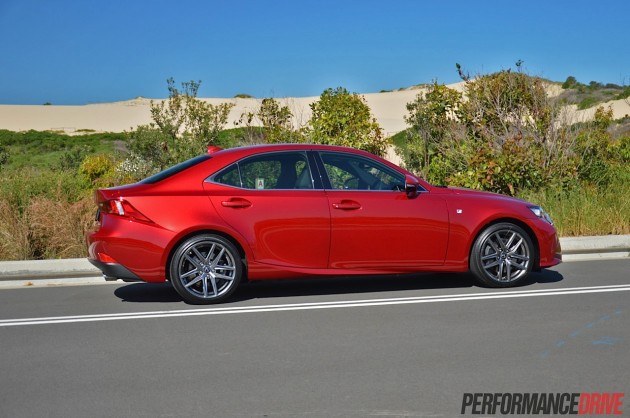 We’ve said it before and we’ll say it again, one of the best things about a new Lexus is the packaging. The Japanese company almost always includes everything as part of the standard kit, with hardly any surprising and or expensive options.

In the IS 350’s case, the only main option you’re faced with is deciding between either the entry-level Luxury, the F Sport (as tested), or the flagship Sports Luxury. Oh, and the paint colour of course.

Each come with a sizeable bucket of goodies. Although, the IS 350 is available with an optional sunroof and an optional Driver Enhancement pack which adds high-speed crash avoidance technology with auto braking cruise control – significantly improved on the previous somewhat basic system.

If you’re in the market for a vehicle of this type and you’re doing your research, it won’t take long to realise just how much is packed into the IS. Most of the stuff mentioned above comes as a hefty option in the rivals. 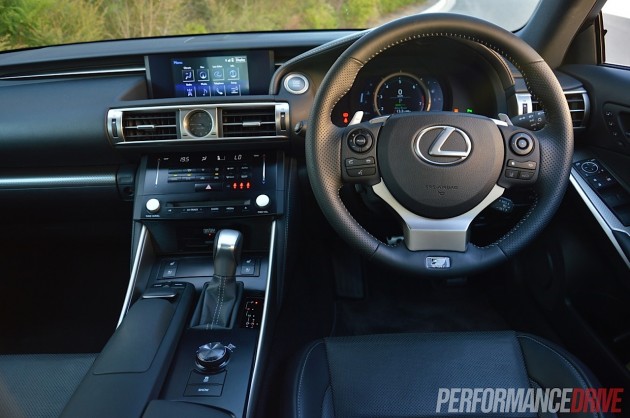 The previous-gen cabin very quickly looked like it was something from the 90s, however, Lexus has more than fixed that with the new model. It’s a terrific in-car environment now. It’s all very modern with cool textures and luxurious materials making it unquestionably one of the more desirable layouts in this class.

The touch controller system is quite advanced and perhaps the easiest and least cumbersome user interfaces on offer. We love the electrostatic climate temp adjustments too. You simply swipe or tap with finger-tip tenderness and it’ll sooth the cabin to your preferred temperature.

In terms of major structural and component changes for the 2014 model, Lexus has decreased the IS’s body-in-white weight by 10kg, retuned the suspension with a 20 per cent increase in sway rigidity for the front end, applied a 10 per cent increase in overall body rigidity, improved the electric steering for a better driving feel with more feedback, and added 70mm to the wheelbase and 10mm to the width for a more aggressive stance and a sturdier handling character.

Under the bonnet no major changes have been made to the 3.5-litre naturally aspirated V6. It continues to produce 233kW of power and 378Nm of torque. Due to the additional equipment and subsequent weight, the new version is slightly less fuel efficient than the predecessor with an average consumption rate of 9.7L/100km compared with the previous 9.4L/100km.

The 350 is backed by a new eight-speed automatic transmission which is derived from the unit used in the almighty IS F. It replaces the previous six-speed auto that continues in the IS 250. At the very back is an electronic brake-type differential. 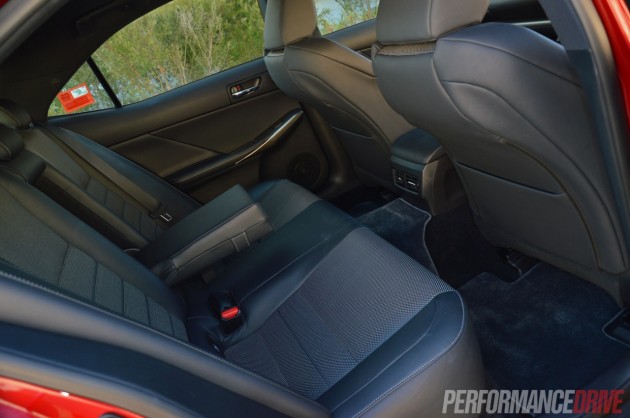 Snuggling down into the lean, soft-leather-wrapped sports seats is the first moment you realise this is a car that’s designed for driving. The driving position is spot on and the steering has that meaty and ready-to-play feel about it.

During the first moments of driving, the IS feels heavy and thick-layered. The upshot is it’s planted on the road and stays firmly in its tracks. When you start to tickle the pedal on the right and twirl the steering wheel like a ballroom dancer, that heavy feeling soon disappears. It becomes a training athlete and changes direction like a soccer ball.

Front end grip is impressive. You can jump into corners with great speed and confidence and it’ll simply glide around them. From there, you can apply a liberal dose of throttle and kick the back end around in the tighter corners. It won’t hold a drift like its V8 brother, but you can certainly get it sliding for short moments. In longer sweepers, the IS remains as firmly planted as you initially thought, providing you with tremendous reassurance and road-holding.

Feedback through the steering wheel is superb. Sometimes there are moments of very minor understeer and tail-kicking oversteer when you’re driving with a gung-ho attitude, and it’s during these moments where you can count on the steering to tell you exactly what’s going on in terms of traction and weight shifting.

The engine and transmission combo is a bit sluggish. Although it has an eight-speed auto from the IS F, the 350 comes with tall differential gearing (3.13:1). Out on the freeway it’s nothing but smooth, quiet sailing. But in the twisty stuff, it would be nice to have a bit more aggression and snappiness in terms of pick-up.

The driving character doesn’t feel as coarse as the previous model. In saying that, it is significantly more refined. It’s also more suitable for a variety of conditions as opposed to being overly dedicated on being sporty.

We timed 0-100km/h in 5.9 seconds. It’s quick but unfortunately it is slightly slower than the previous model that we tested (5.4 seconds). This could be partly down to the small increase in weight; 1685kg vs 1645kg.

For every other occasion when you’re not driving like you have ants in your pants, there is no doubt the 2014 IS 350 is the superior car. It’s quieter on the highway, a touch softer and more relaxing, and in general it behaves like a more thorough luxury vehicle. It may have lost some of its rawness but it more than makes up for it with increased quality, composure, and completeness. 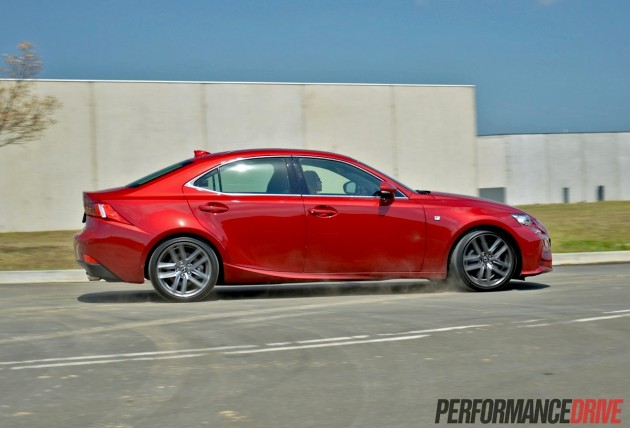 So, it’s heavier, softer, less fuel efficient and slower than the previous model, but, it feels and looks like it is in a completely different (higher) price bracket now. Inside and out. It’s also packed with more features and technology, increasing its value, and it is nicer to drive in a wider range of conditions.

This is an outstanding vehicle. The interior is one of the car’s highlights, and, let’s face it, that’s where you spend most of your time with a car. It’s modern and stylish with a good mixture of quality materials, some intriguing gadgets, and plenty of comforting luxuries that, unlike in the rivals, come standard with the car.

If there was any area that we would change, it’d be the engine. It sounds great and offers lashings of power, but it just lacks a bit in low-end torque. The economy is also far from the best in this segment; we averaged 11.3L/100km.

If Lexus infused some sort of turbocharged unit into the powertrain we think it could overtake the BMW 335i and become the best all-round premium performance mid-sizer on the market, taking into account its price and renowned reliability. We would love to see Lexus step up here and dig deeper into its pockets. Until then, it remains as a silver-winning proposition in our opinion.

PROS:
– One of the very best interiors in its class
– Big list of luxuries that come as standard
– Roaring V6 engine, loads of power
– Build quality and Toyota reliability
– Price (for this segment) 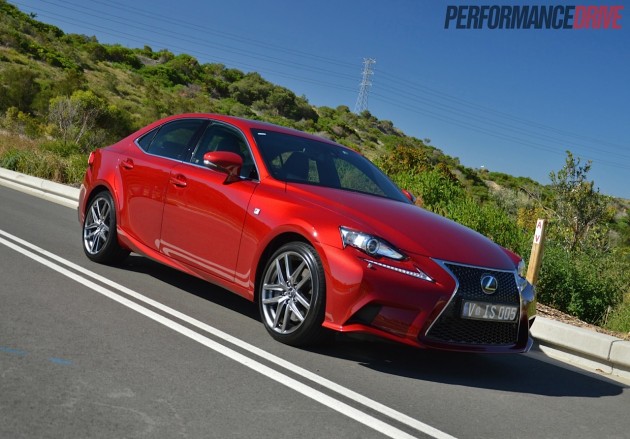