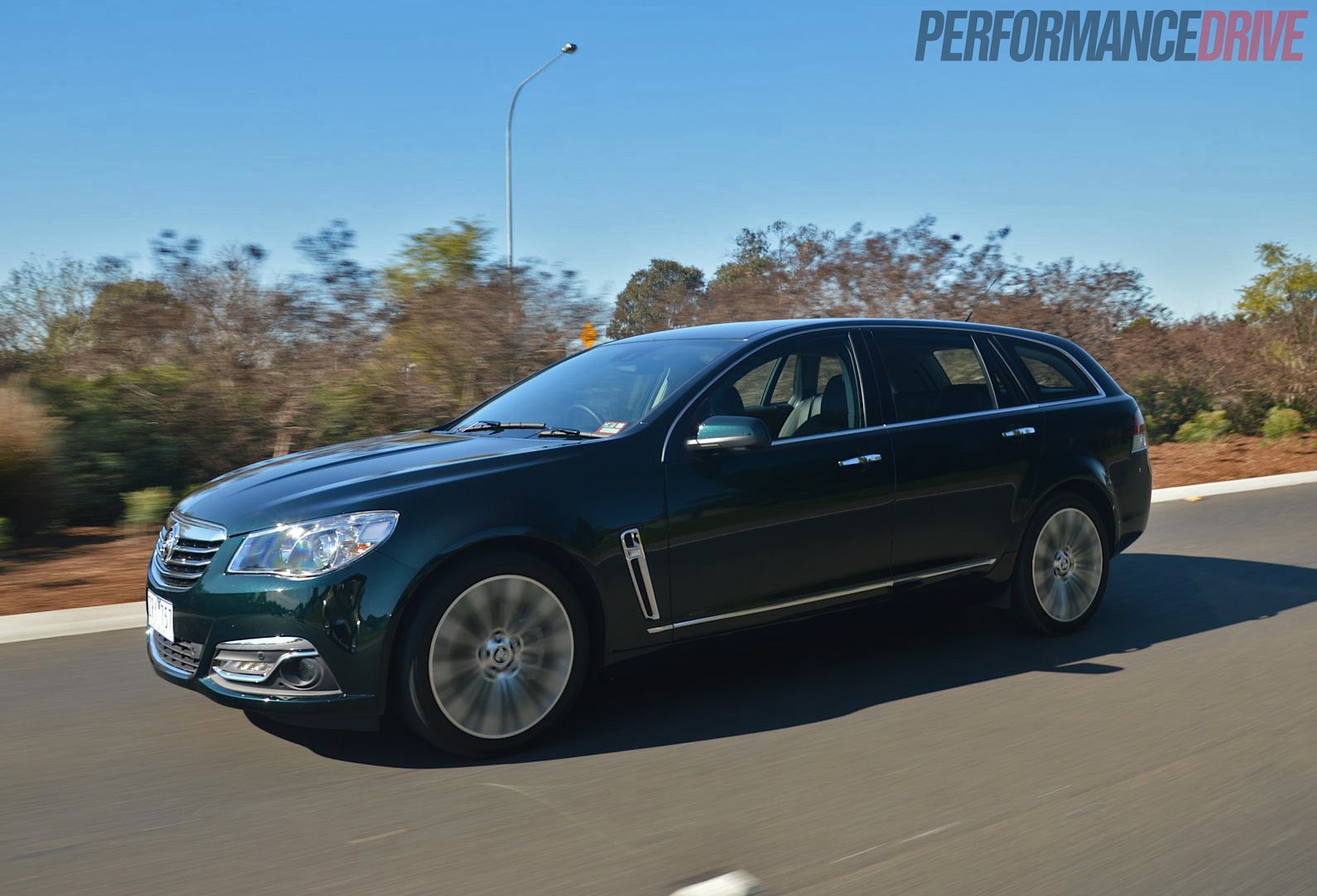 The 2014 Holden VF Calais V V8 Sportwagon has to be one of the coolest performance/luxury wagons on sale. Featuring a 260kW V8 under the bonnet, a spacious interior, and more technology than any other Australian-made car, this is a workhorse that’s ready for the family workload. 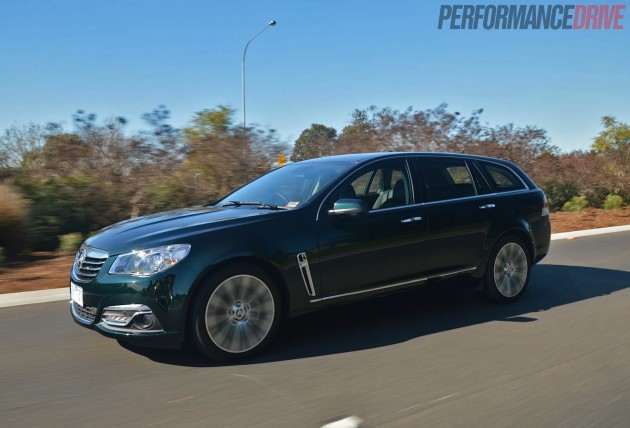 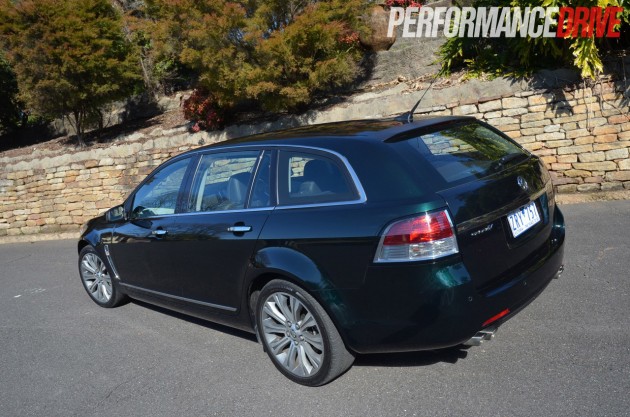 Though the VF might initially appear to be a light front and rear overhaul with a flashy new trim, up to 70 per cent of the chassis and underpinnings have either been revised or replaced. For instance, the VF uses higher tensile steels compared with the VE for increased roll over safety, and for the first time ever in an Australian-built car, the VF features an aluminium bonnet and boot lid (boot lid on sedan only).

Holden has chosen to go down the electric power steering route with the VF. The new rack features a linear gearing ratio, as opposed to the variable hydraulic power unit seen on the VE. The new electronic steering is standard across all models, each with its own exclusive tune to match the car’s purpose.

Technology-wise, there is no other Commodore that comes with more kit. In fact, there isn’t any other Australia-built car that competes in terms of kit for cash.

The Calais V is at the top of the VF tree, and you can tell. The newly-designed cabin is laden with leather, technology, and loads of space (especially the Sportwagon).

Whereas the previous cabin felt a little plasticised and cold, the VF’s cabin feels warm and snug. From the comfortable front seats (eight-way electrically adjustable driver’s seat) that allow you to sink right in no matter your physical dimensions, to the nicely-raked rear seat that offers loads of head and legroom.

There’s very little to complain about. However, there were some crease marks on the lower left part of our test car’s driver seat, which could be a sign that a lot of bums hopping in and out could lead to a tear or cracked leather down the track.

The other worry we had was the headache owners will face when someone spills coffee or puts dirty marks on the light-coloured leather coverings, both on the dash and on the door trims – maybe there are some cleaning tips in the manual? We’ll get back to you on that one. 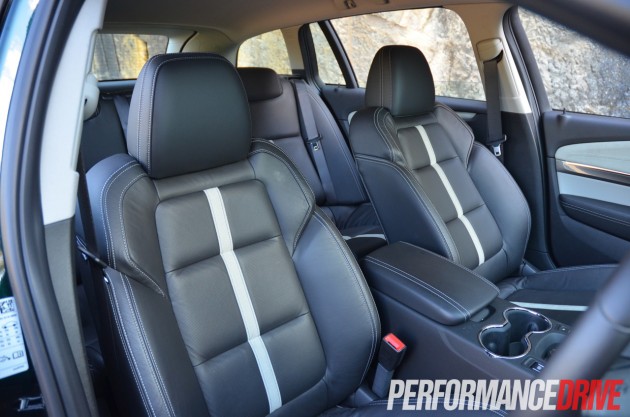 Gone are the fiddly centre console power window buttons and awkward-looking handbrake, and in is a more conventional driver’s door window control unit and an electronic park brake – something traditionalists might have an issue with, but nonetheless it does its job just fine.

The eight-inch screen is clear and crisp, making the navigation a peach to use. Sound quality from the new Calais V’s stereo is a huge improvement over the VE system, which could simply be down to its improved sound deadening and cabin layout. It offers a punchy sound that doesn’t sound tinny or flat.

Overall, the MyLink system is very easy to use with no confusing long-winded menus to trawl through, together with clearly marked touch-screen options, buttons, and toggle switches. 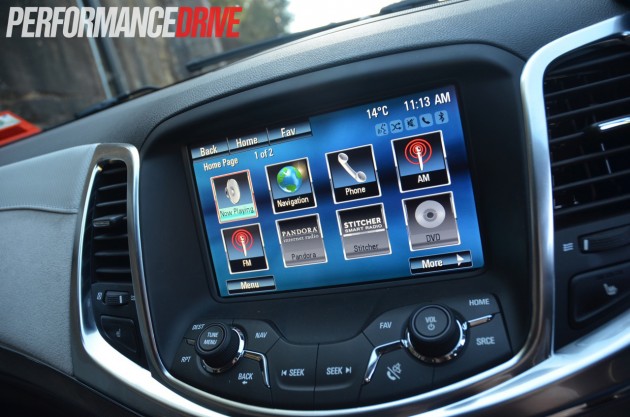 The VF Calais scored 35.07 out of 37 in recent ANCAP crash tests, awarding it the full five-star rating. The Calais is fitted up with no less than six airbags, and comes with a host of other safety features such as traction control and stability control.

There’s also a basket of new safety additions to the VF Calais V, the first being a neat head-up display that reflects the car’s speed into the front windscreen in direct path with the driver’s line of sight. You can choose between a few displays, varying from revs and speed, to speed and a notification of the current speed limit based on your GPS coordinates.

Another new safety feature is blind zone alert system. This warns the driver of approaching traffic alongside the vehicle with a little yellow display that lights up in the corner of the side mirrors as the object approaches. We found it great for keeping check on motorcyclists and smaller cars that are normally harder to spot. There’s also a new crash alert system that will give off an audible alarm should the car in front get too close or brake suddenly.

Along with every VF Commodore in the line up, the Calais V receives Holden’s new self-parking system and reverse camera. All you need to do is push the self-park button at speeds under 30km/h and the on-board computer will measure up a free space and let the driver know once it finds something suitable. Then the system will tell you which gear to select and you control the brake and throttle while the car turns the steering automatically. The system isn’t perfect; depending on the size of the car spot and the surrounding environment, sometimes it will overshoot the spot, leaving you to frustratingly take over and steer it yourself. When it does work, it helps to make your day a little bit easier.

We’re a fan of the new exterior styling changes that have been made to the VF, and Calais in particular. The front now looks more like a car from the more expensive ‘premium’ segment, with just enough chrome to dazzle, and classy 19-inch wheels to match. The new aggressive contours of the aluminium bonnet, along with the LED running lights also add to its oncoming appearance. 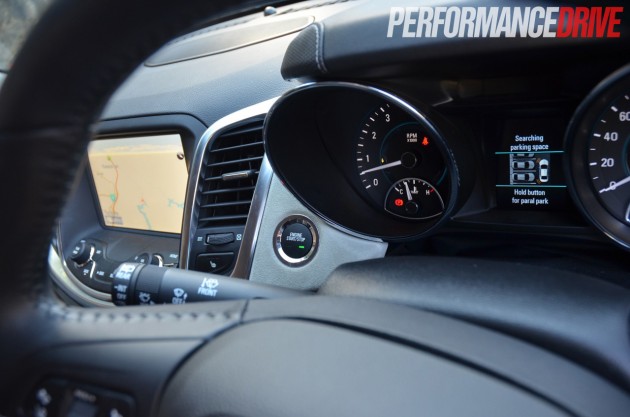 The VF feels right at home on Australian roads. In Sportwagon form, the VF Calais tips the scales at 1866kg, making it the heaviest VF model on sale. To drive, however, it doesn’t feel as heavy as the numbers suggest. The Calais shares its supple suspension tune (FE1) with the base model Holden Evoke.

It does seem weird that the top model uses the same suspension equipment and tune as the base model, but, it works, and delivers a ride that’s sporty enough to enjoy a few twisty bends, but soft enough to keep those who like a comfortable ride that doesn’t snap your spine.

The beasty 6.0-litre V8 engine is always noticeable, rumbling away as your stretch through the gears. Using its six-speed automatic, the Calais V8 has loads of torque on offer from the get go, and it’s only a small prod away from making things move in a real hurry. If you give it the full beans, the Calais surges through the gears like a trooper, letting off a masculine V8 roar from its quad tailpipes. You also get the odd pop and crackle when shifting down gears manually. 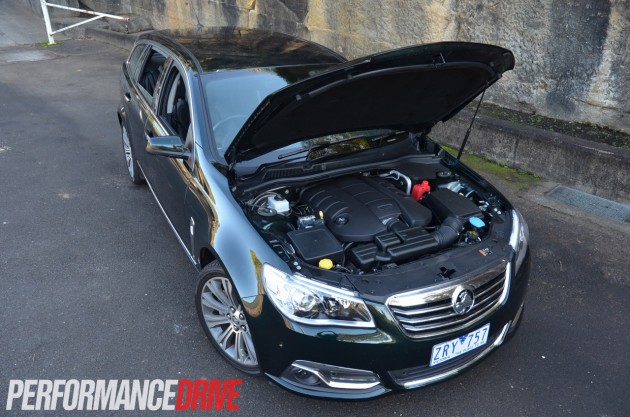 Even with five people on board, the big VF wagon never feels lazy or held back. Its 0-100km/h time of just 5.8 seconds (as tested) tells us this big wagon is a more than capable performance car. Even more impressive is its ability to reel in cars when you overtake; you won’t spend much time on the other side of the road.

Fuel consumption is really something that lays purely with the driver. If driven sensibly, the Calais V V8 can return high nines on the open road, and mid to low 12s during mixed situations. If you drive it actively, you will see the average fuel consumption crawl into the 16L/100km mark… sometimes even higher.

All VF models can use E85 fuel, but we found the best consumption rates using unleaded 95 RON, and above; don’t get too uptight about hunting for a service station that serves up E85, you’ll find the fuel gauge will move much quicker.

We found the electric power steering to deliver a solid feel that communicates well with the driver. It’s easy to guide around town, and feels well-weighted when driven actively. Even when you really start to shuffle the wheel at high speeds over bumpy roads, things stay calm and controlled. Together, the VF’s FE1 suspension and steering tune make for a well-balanced, dynamic feel. Especially for a car of this proportion.

Braking in the 1866kg wagon is firm and solid, with little to no nervousness no matter the situation. Even on gravel, the braking system doesn’t flip out and become nervous. The ABS also is set at a nice threshold that doesn’t interfere unless it’s an absolute must. With 245mm-wide tyres sitting at each corner, the Calais V sports a good footprint on the road. 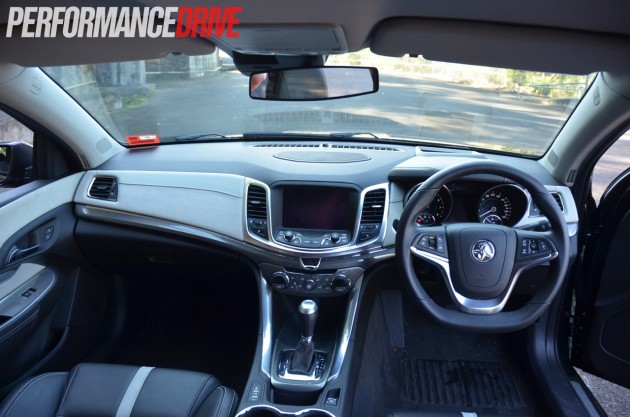 The VF Calais V in Sportwagon shape presents a very affordable, luxury/performance option in the large car segment. Very few cars under $60k present so much in the way of technology, performance, space, or comfort. Externally, the VF is certainly a great looking car from the front, with only the rear of the Calais V Sportwagon not receiving any major cosmetic changes.

Australian-made cars like this are a dying breed. Without switching over to an SUV, there really isn’t much else standing in its way?

PROS:
– Redesigned VF cabin is a classy and very comfortable
– New VF Calais front fascia has a more premium look over the previous model
– New safety and self-parking features are a welcome addition
– A great large family car for the open road

CONS:
– Fake carbon-fibre dash trimmings
– The rear styling of the VF wagon isn’t updated over the VE
– Fuel consumption can be woeful during city driving
– Electronic handbrake does take some getting used to 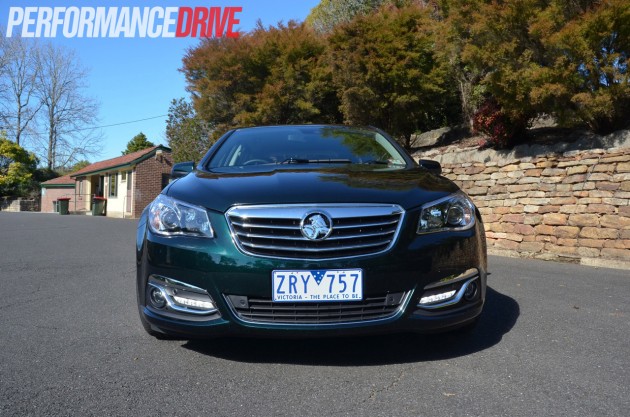