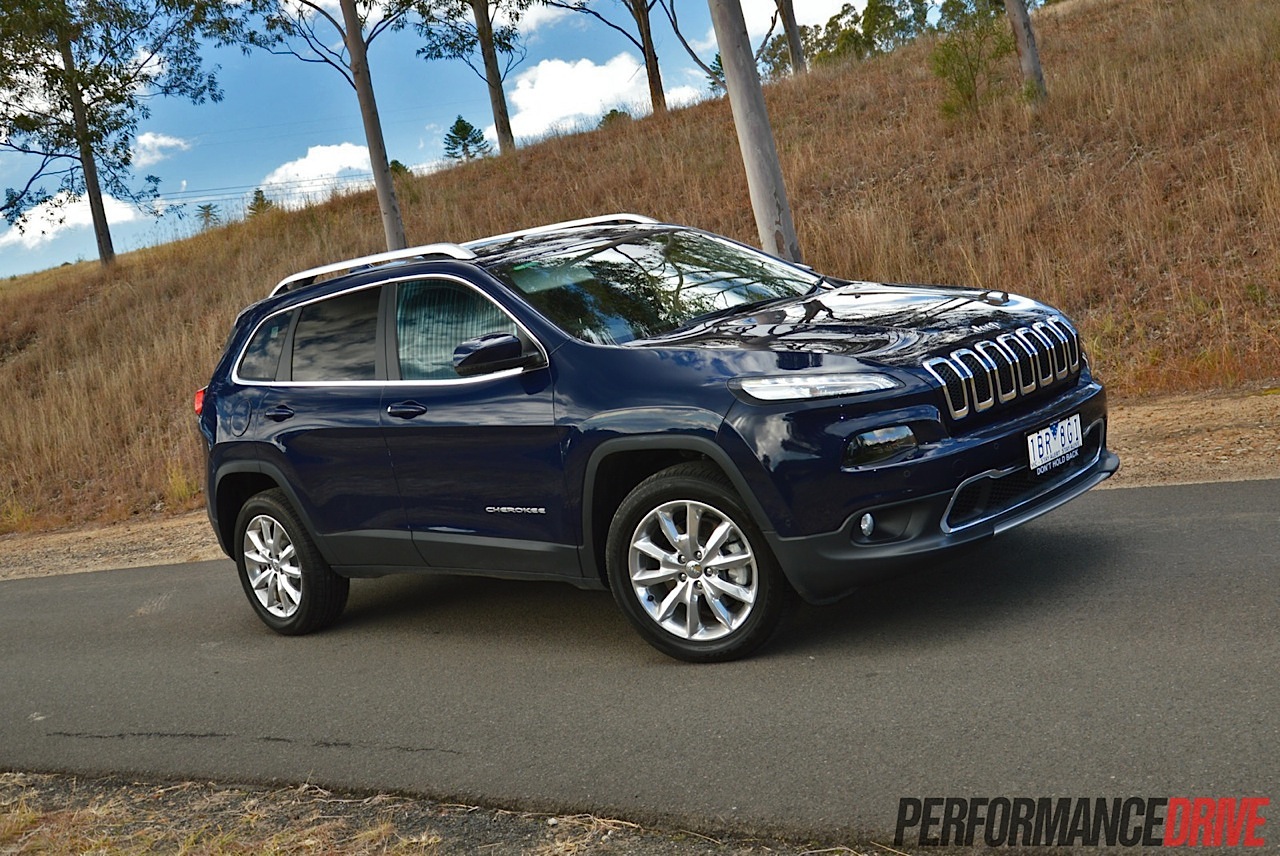 It’s fair to say Jeep is well established in everyone’s mind when it comes to off-road experience. If it’s not the fact the company has been around for over seventy years, originally serving in the US military, or the fact that it produced the world’s first off-road vehicle, it has to be the current “I bought a Jeep” marketing campaign that makes you feel like you know the brand like you know an old friend. 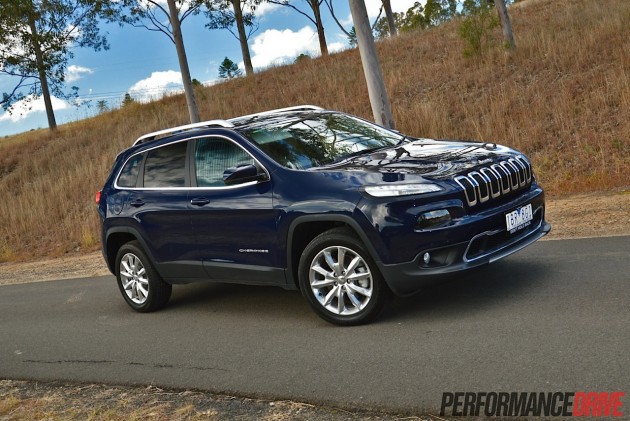 Much like the marketing campaign, you’ll either love or loathe the new 2014 Jeep Cherokee, and it’s a decision that could be made in just one quick look at that controversial sour-lemon face. There is a lot going for it, but, if you’re particular about your vehicles, there is a few niggles you might have to overcome.

The Cherokee has come a long way since its inauguration in 1984, now adding a huge array of technologies to what started out as a basic yet dependable and rugged off-road vehicle. It still is rugged and dependable, but now it’s made more advanced than ever before and thus appeals to a wider market audience.

Fresh from the conveyer belts of Jeep’s Toledo, Ohio, US production facility, the local arm has introduced a generous variant range for Australian buyers. Spanning from the base model Sport, Longitude, Limited, and up to the range-topping Trailhawk, Jeep is catering for all ends of the mid-size SUV segment.

There’s also two different engines in that lineup. The Sport comes with a 2.4-litre four-cylinder petrol engine eccentrically named ‘Tigershark’, then there’s a 3.2-litre petrol V6 ‘Pentastar’ offered in the other three variants.

All models come with an industry-first nine-speed, that’s right, nine-speed automatic transmission made by the renowned ZF gearbox brand from Germany. This makes it the first mainstream production vehicle in Australia with a nine speed. Could this be a pioneer for the SUV world?

Today, we’re putting the Jeep Cherokee Limited with the 3.2-litre V6 to the test, where prices start at $44,000 plus on-road costs. 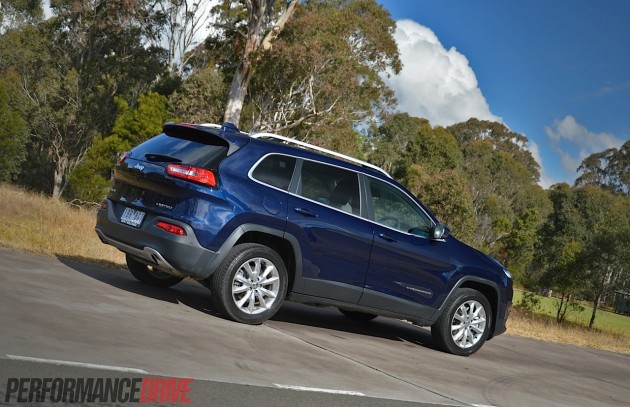 The price tag is one of those ‘good things going for it’ mentioned earlier for the Cherokee. Comparatively, the Limited spec gets an impressive list of standard features.

Almost all features work beautifully, especially the massive 8.4-inch centre touch-screen. It’s pleasantly user-friendly and not too distracting when driving. The Alpine sound system is another stand out. Although taking up some valuable boot space, the sub-woofer produces a crisp and deep blast that makes it well worth the space. 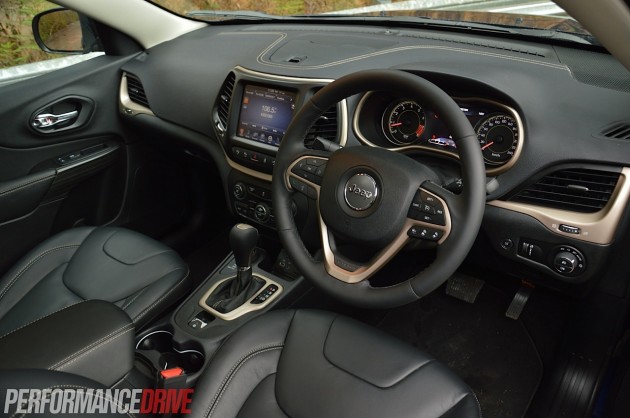 We feel the adaptive cruise control could do with some fine tuning for optimum accuracy. Also, the lane departure feedback is a tad oversensitive. If you aren’t dead-centre in the middle of the lane the automated steering tends to take over too early and you find you need to regularly go against what the car wants to do. Other vehicles, albeit more expensive ones, with this technology only kick in once you drift onto or very near the lane line. Even so, this is an outstanding piece of technology for a relatively modest SUV.

Jeep officially categorises the Cherokee as a ‘mid-sized SUV’, so it goes up against vehicles like the Toyota RAV4 and the Mazda CX-5. The interior space is large for this class, but pokey if you compare it to the larger SUV category where the Cherokee used to sit. Accommodating four adults, or two adults and three kids, is easily achievable. And having the rear seats on rails adds practicality as you can slide them back and forth.

The rear cargo area offers 412 litres of space with the back seats set up. To put that into perspective, the Mazda CX5 offers 405 litres and the Mitsubishi Outlander offers 477 litres. It’s quite narrow in the back due to the plastics taken up by hidey-holes and the sub-woofer, but it widens out when you reach window height. To make accessing the space just that little bit easier, the Limited comes with a handy electric tailgate as mentioned.

Interior feel is what we’ve come to expect from a modern Jeep. Much of it is made from hard plastic and gives off a very strong and durable vibe. Cabin feel is exceptionally airy thanks to that optional panoramic sunroof, and there are plenty of holes and holders to conveniently hide away all of your belongings. 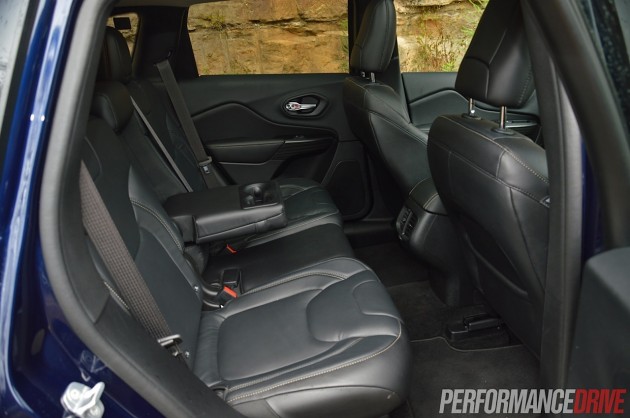 All seats, including in the rear, are soft and supportive, even for big builds. We think they are especially comfy for those long-haul drives and weekend getaways as they are mounted quite tall, which tends to free up leg movement and blood flow.

Unfortunately, Jeep has redefined the word ‘overkill’ with the amount of buttons on the steering wheel. There’s some on the front and some hidden ones on the back. Six on the back to be precise and another 16 on the front, not including the horn.

We get it, it is more user-friendly to have buttons right at your fingertips, especially for common variables like channel and volume control. In this though, all of the front steering wheel buttons change their functionality depending on which menu you’re in within the instrument cluster. It can be fidgety and confusing to keep up with it all, to say the least.

Now to the issue that’s on everyone’s mind the second they lay eyes on the 2014 Cherokee; the exterior styling. What were you thinking, Jeep? Well, its official answer is that it was necessary for the appearance to undertake a major change because consumers demanded it. But it hasn’t been well received thus far.

The front lights have been divided up into three small separate units, which makes the front end look like two cars stacked and squashed on top of each other in a wrecking yard. We’re sensing a hastier than usual facelift update being on the way.

Thankfully the quirky appearance doesn’t flow through to the rest of the car. The rear styling looks well-proportioned and much more socially acceptable. 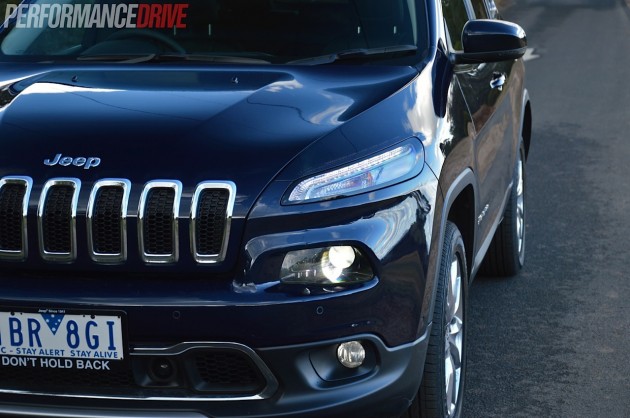 Among the market, we rate the Jeep Cherokee to lean more towards an SUV purpose-built for bashing through off-road terrain than scuttling about in the city. On city roads the ride is a tad bouncy. There are definitely more sedan-like SUVs out there that give you a smoother and more refined ride if you intend to spend more time around town than out the back o’ Bourke.

If it’s the bush that keeps you busy though, the Jeep will not fail to be fun, capable and adventurous. There’s a centre differential lock for seriously slippery conditions such as in the snow or when towing a boat from a wet ramp, as well as 196mm of ground clearance which is about average for a mid-sizer (Mazda CX-5; 210mm), and gearing that is exceptionally low for steep hills.

Switching through the various profiles of the Jeep Cherokee’s Selec-Terrain four-wheel drive system gives you the opportunity to see just how well it can cope with hill climbing and descent. Vehicle speed is controlled by the vehicle itself on steep descents, while mud, rock and rough terrain settings set the transmission and torque distribution to best manage the conditions.

All systems behave with zero fuss and present minimal wheelspin. In fact, it’s that smart, you can simply rely on the ‘auto’ mode and let the Cherokee effectively work it all out itself. 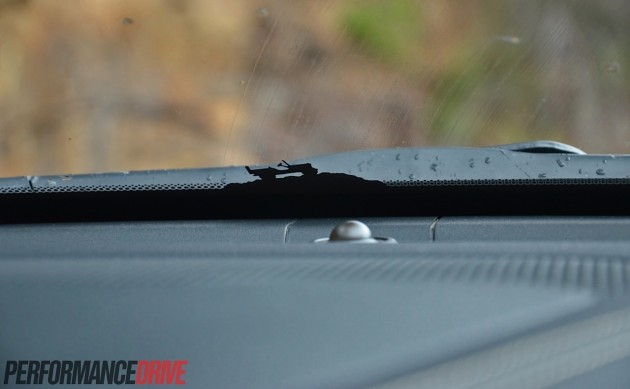 Powering the new Cherokee is a junior version of the company’s Pentastar 3.6-litre V6. The 3.2 here produces 200kW at 6500rpm, and 316Nm at 4400rpm. The power figure is excellent, there’s no doubt about that, but peak torque is low and it’s achieved at high revs. In a vehicle weighing 1834kg, you need to keep on the accelerator to maintain swift momentum.

Fortunately, the engine seems like it enjoys revving out. We timed the 0-100km/h dash in 8.4 seconds. It gets up and goes with unexpected urgency when you really push down on the pedal. Cross country performance is a lot better than fast sprints and getting off the line.

As for that outrageous nine-speed, it’s not as delightful as you might assume. We went in thinking what a great way to get the most out of an engine by making the power band more accessible and having more gears to divide it up.

In stop-start city conditions the transmission sometimes seems like it can’t figure out what gear to be in, and overtaking on the open road is an interesting experience as you watch it try to confidently jump down from eighth or ninth into third or fourth. It’s a great step and one that was probably inevitable, but we think there is still some fine-tuning needed for this transmission to be as comfortable as a six- or seven-speed auto.

This brings us to the whole reason for the nine-speed; better fuel economy. Official figures say 10L/100km flat for the combined cycle, while the best we could do was 12.6L/100km. Compared with the last Cherokee, economy has improved significantly. The previous model came with a 151kW 3.6-litre V6 that used an average of 12.4L/100km. 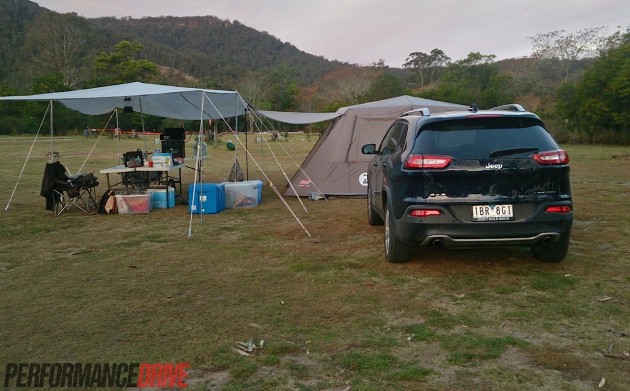 The 2014 Jeep Cherokee sticks to its historical roots by being an SUV designed to be driven off road. If you’re in the market for more of a softroader and you’re spending most of your time on city bitumen, there are more well-mannered alternatives. But if you want get out and amongst the wilderness the new Cherokee is definitely a winning contender.

It’s comfortable and easy to drive, passengers are treated to plenty of technologies and luxuries, and the driver gets to enjoy various driving modes and active safety systems. ANCAP has crash tested the new model and has awarded the full five stars – not even the Grand Cherokee can match that.

PROS:
– Excellent sound system
– Centre media centre is large and easy to use
– Smooth and absorptive suspension off road
– Comfortable and practical interior
– Better off road than on road 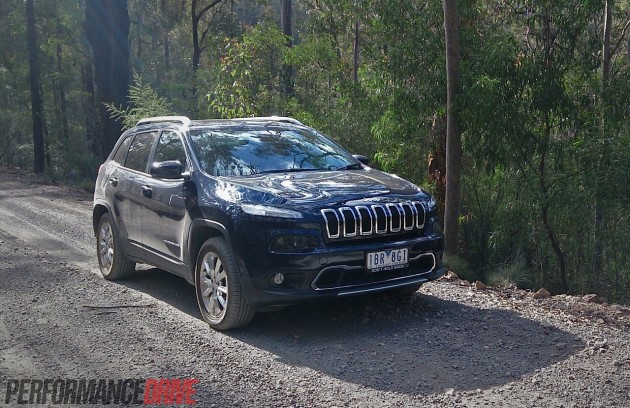