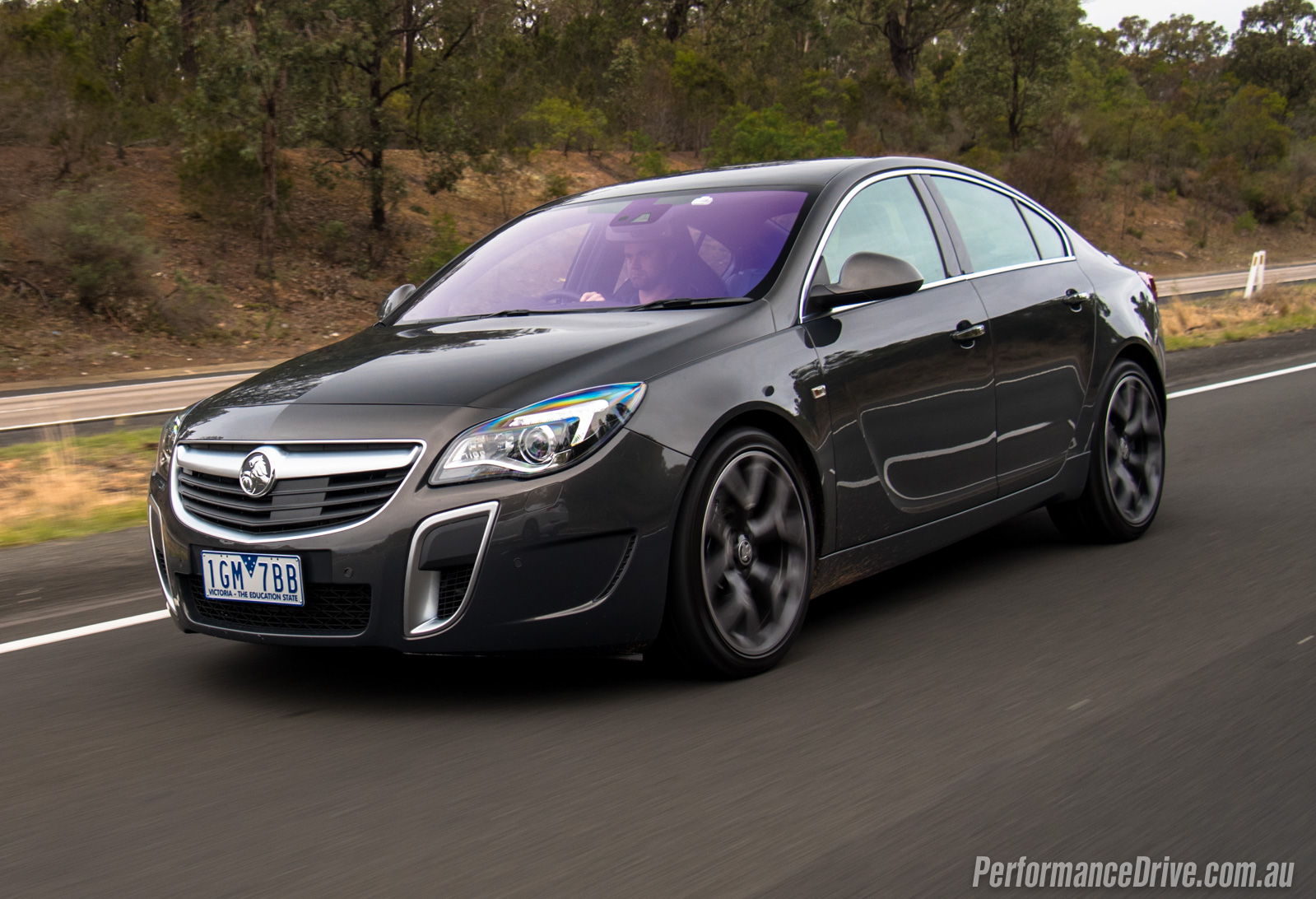 This week we sampled the 2016 Holden Insignia VXR; a car which signals Holden’s return to more sophisticated, European offerings, and one which may hold several clues to the all-new 2018 Commodore (or whatever it ends up being called). 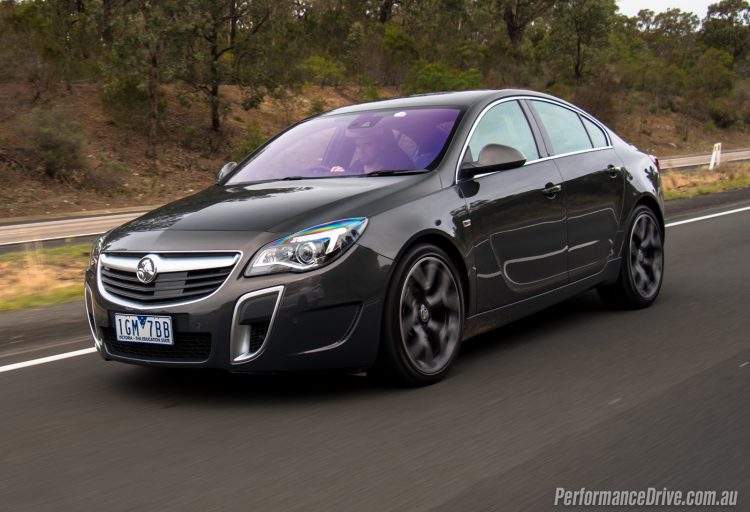 If several media reports are to be believed, the next-gen Insignia will be the Commodore’s replacement. It will have some very big shoes to fill there in terms of comfort, trustworthiness, character and other core attributes that distinguish the Commodore from its overseas rivals. At 4842mm long, this Insignia is 122mm shorter than the VF Commodore, with a 178mm shorter wheelbase.

For now though, the Insignia is a mid-sized German-built sports sedan based on GM’s Epilson platform (shared with Malibu and Buick Regal). It promises quite a lot on paper, featuring an Australian-built 2.8-litre single turbo V6 with 239kW and 435Nm, this is the most stonking car that GM Europe offers. It channels that might through a sophisticated AWD system and limited-slip rear diff. It also gets magnetic ride control, selectable driving modes (including “VXR” mode), and a swathe of driving assistance systems.

At $51,990, comparisons with the similarly-priced and much more powerful Commodore SS V are inevitable. The VXR is going for another angle entirely, with a different driving feel and more technology. Comparable cars might include the Subaru Liberty 3.6R and even the new Skoda Superb 206TSI, in terms of price, and cars like the Subaru WRX and Audi S4 in terms of specifications and ambitions. 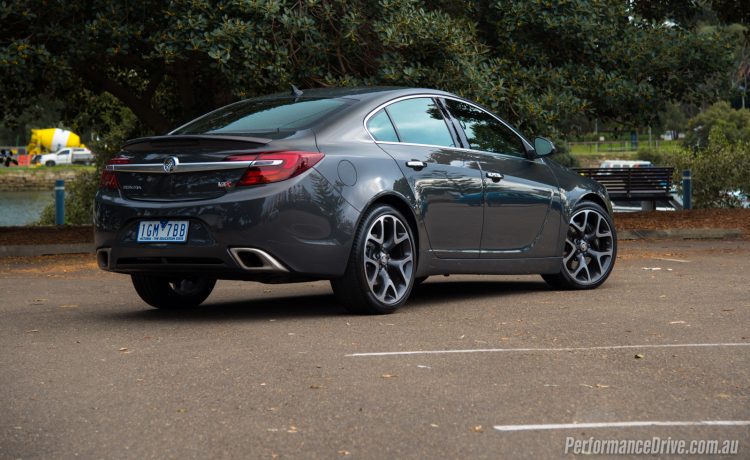 Right off the bat, the VXR has a lot of compelling features. Its sexy, soapbar and almost-coupe shape looks hunkered down on the enormous 20-inch forged alloys, shod with 255/35 Pirelli P-Zero high-performance tyres. Behind those are some serious-looking Brembo four-piston brakes, with massive cross-drilled discs. The twin nostril façade with fang-like openings make it look like a happy walrus.

Stepping inside, there is an austere, grey colour scheme but you are greeted by an agreeable layout once seated in the tombstone-shaped Recaros – which are very firm. Both front seats offer full electric adjustment, with the driver’s moving back to allow for easier ingress.

A very nice touch is the TFT instrument display that was brought in with the 2015 update, which is always clear and offers an array of handy information. It serves as a reminder this is Commodore’s more civilised, erudite European cousin.

Seat heaters, climate control and a massive touch-screen with Holden’s latest MyLink system all make for pleasant touring. Apple CarPlay and Android Auto are very welcome additions for 2016. All functions, including the navigation system are easy and intuitive to operate while driving.

One disappointment is the seven-speaker stereo that is prone to distortion as the volume climbs. Accommodation is good for the four outboard occupants, while the middle seat is confined. Safety is expectedly brilliant with a five-star ANCAP rating, as is the 500L boot albeit with a pathetic tyre sealant pump in lieu of a spare wheel. 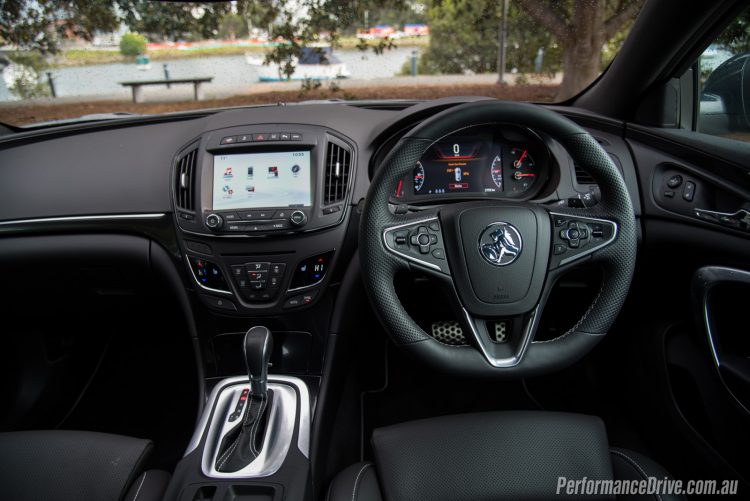 With all the Insignia VXR’s aforementioned credentials, it should be an absolute hoot to drive. And it is. The body is extremely rigid, and you feel like you are sitting on the front axle, with little to no understeer. Grip from the Pirelli’s is superb, but a well-balanced chassis and excellent all-wheel drive system means you aren’t relying on them solely. The steering is very direct and meaty off-centre, with the car defying its sub-1800kg weight with deftness in the corners. The Brembo brakes do an outstanding job of wiping off speed in no time too, with 100-0km/h coming up in just 39.61 metres.

Pressing the button marked ‘VXR’ activates the magnetic dampers, sharpens the shift map and engine response. This makes a perceptible difference, for the worse with the gearbox which is already frenetic in Normal setting. Mercifully, ride is always firm without being harsh, regardless of the setting.

The engine is quite long in the tooth, featuring on the Saab Aero X cars from the middle of last decade. With only one turbo and quite a lot of plumbing, it is slightly laggy down low but does have a satisfying induction growl pumped into the cabin. 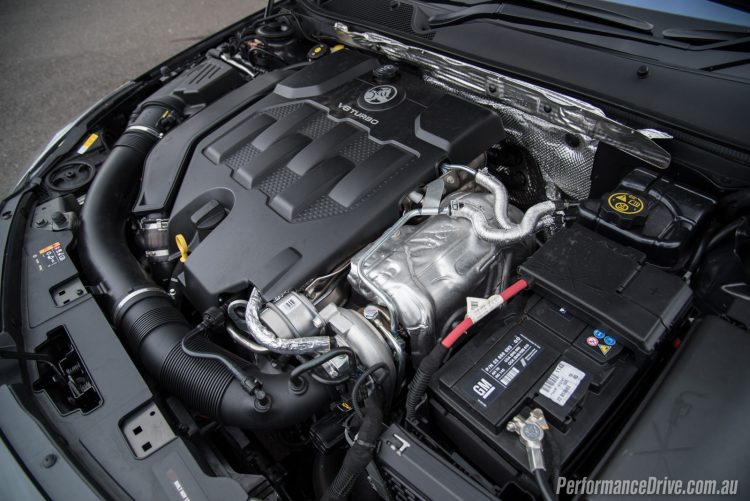 Performance, though, is ho-hum with a recorded 7.6-second 0-100km/h time bettered by many four-cylinder newcomers, with far superior fuel economy. Speaking of which, the Insignia managed a V8-like 12.8L/100km average while we had it, against the ADR average of 11.3L/100km. The engine and gearbox are this car’s Achilles’ heels. We get the sense a six-cylinder diesel would be more suited to the character of this car as the performance and fuel consumption presented here do not match up. Interestingly, the 2015 VXR model we tested last year recorded a 0-100km/h time of 7.8 seconds. We put the difference down to the auto transmission, which felt very ‘used’ in the previous test car compared with this example.

Once it gets up and running, however, you can hear the turbo spooling up relentlessly as it develops a healthy head of steam. In fact, de-restricted VXRs have seen in the vicinity of 273km/h. Mid-range punch is strong, with peak torque of 435Nm coming in at 2250rpm.

Cruising duties are handled by the very adroit adaptive cruise control system, which also works in low-speed traffic and can improve economy out of sight. Left to its own devices, it sliced it down to 7.8L/100km.

European customers get a wagon version as well as the option of a manual gearbox. We think this car, in its current specification, would be much more enjoyable and probably significantly quicker with the manual, or even a quick-changing dual-clutch auto. Given it is near the end of its life cycle, having been on sale in Europe in virtually the same form since 2007, we assume this is as good as it gets for this model.

While an unconventional choice to many, the Insignia VXR stands up well in several ways , carving out its own identity as a technologically sophisticated German performance sedan which should win many friends. What lets it down are an ageing, inefficient engine as well as a (at times) a thumpy gearbox and hard seats, which mean it cedes outright comfort to many similarly-sized rivals.

Nevertheless, it is a very accomplished performer around the corners and at high speed. The Insignia is a car which takes time and a twisty road to really get to know it, which is perhaps why only a handful have been sold so far this year. If you can live with its flaws you could have yourself a very rewarding purchase, and quite an unique one. We certainly look forward to the next-generation.