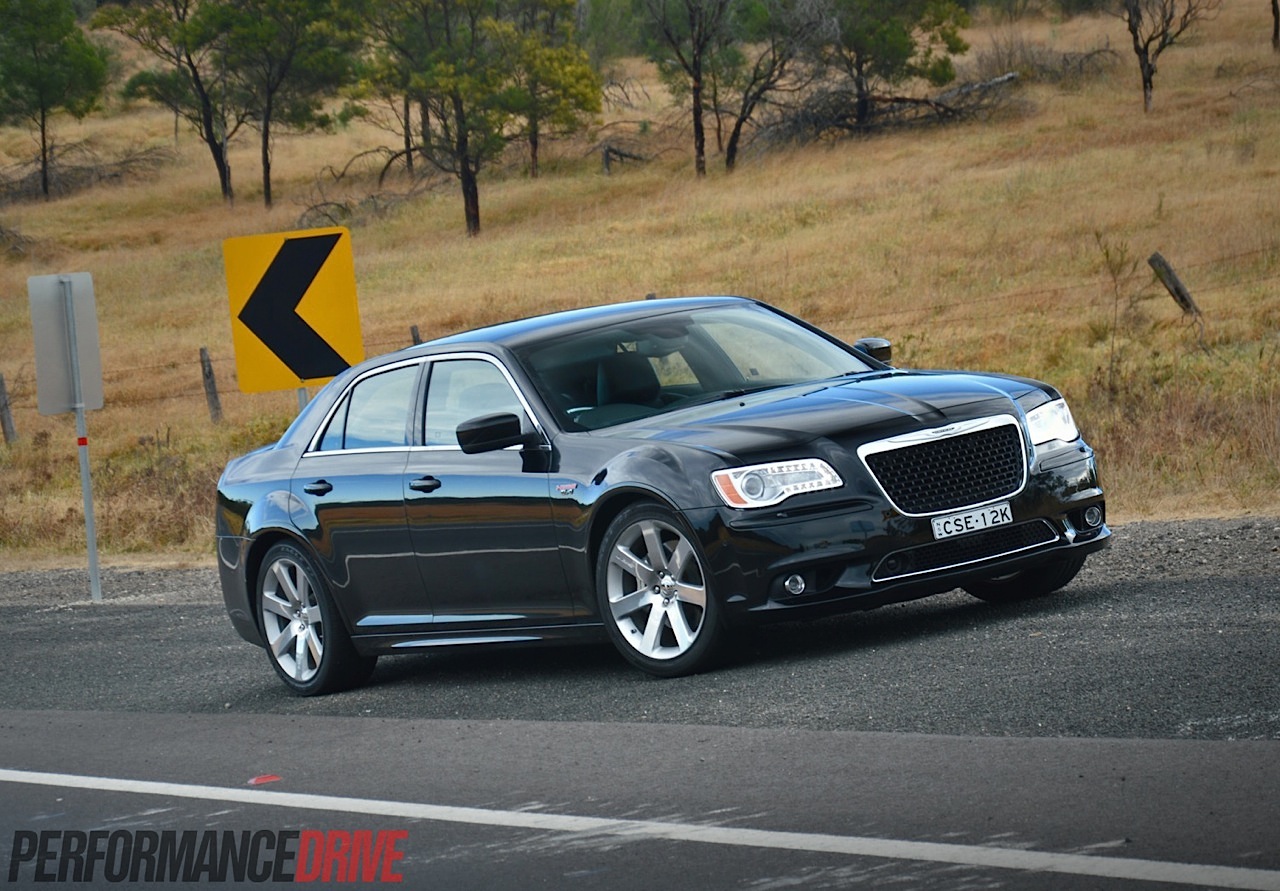 You’ve probably heard the sayings before, ‘muscle cars are great for straight lines but they’re useless when it comes to corners’. Well, we decided the best way to test this theory was to do an experiment. Take one muscle car, a 2014 Chrysler 300 SRT8, add one track, lots of steering lock and lots of throttle, and see what happens. Oh, and maybe add in a set of tyres. 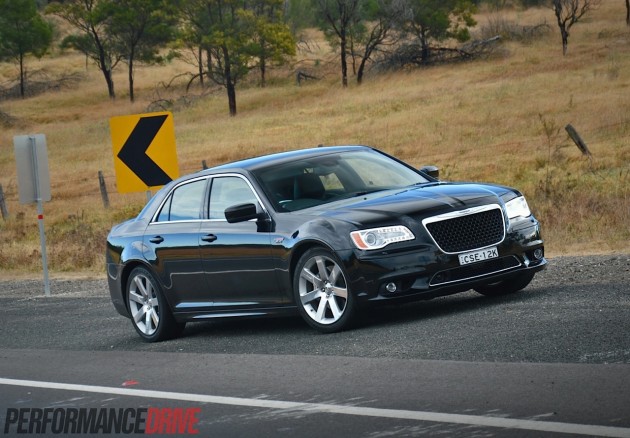 The Chrysler 300 SRT8 is pretty much the only genuine US muscle car you can get in Australia at the moment, officially. Specifications for the 2014 model are carried over from the 2013 version. This means it gets that almighty 6.4-litre HEMI V8 thumping out 347kW of power and 631Nm of torque. It is one of the most powerful naturally aspirated V8s currently on the market.

Sitting behind the engine is an ageing five-speed auto transmission. Chrysler is yet to adopt the much better ZF eight-speed auto, which is featured in the Jeep Grand Cherokee SRT8 with the same engine (344kW).

One of the best things about the 300 SRT8 has always been its price tag. It is a sensational bargain. No other car comes close in regards to offering this level of in-car technology, space, and brutal performance. It is one of the best value performance vehicles you can buy.

Prices start at just $66,000 for this top-spec version. If you’re not really a fan of leather and you’re not interested in a loud, sub-woofer-enhanced stereo, the 300 SRT8 Core starts at $56,000 and comes with the exact same running gear. 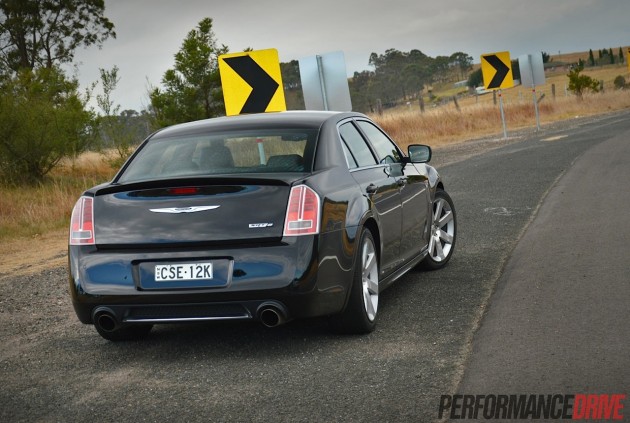 This is a track test but we think it is necessary to mention some of the gear this bad boy comes with. The standout of it all is the 8.4-inch Uconnect touch-screen interface. It’s one of the better (and bigger) screens on offer, especially in this segment, incorporating everything from climate control and sat-nav, to the vehicle settings and connectivity programs. It’s very easy to use, with responsive touch calibration and good button spacing.

There’s also a special SRT Performance menu that presents a plethora of gauges and timers, and the Sport and Track driving modes that firm up the suspension and increase throttle sensitivity.

You can time 0-100km/h, 0-400m (quarter mile), watch the real-time engine output gauges, and explore the cornering limits with the g-force gauge. It’s awesome. You can also show a ‘time slip’ to your mates which displays all of the car’s best acceleration times. 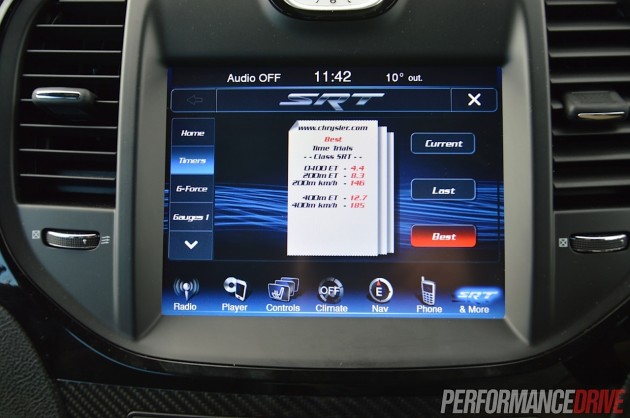 Aside from the gadgetry, the 300 is huge inside and perfect for a full family of five. The front seats are big and well-bolstered with a massive centre console and storage box separating the two. In the back you’ve got more than enough legroom and equally impressive shoulder space and headroom.

Although it doesn’t enjoy the sales of the Holden Commodore or Ford Falcon, the 300 should be up there as far as we’re concerned. It even comes with a very torquey and economical turbo-diesel engine option if one so desires – none of the Aussie rivals offer that.

Other luxury items for the SRT8 include auto bi-xenon headlights with automatic high-beams, a power adjustable steering column, seat heaters and coolers for the front, radar cruise control with distance settings, and a 19-speaker stereo with a sub-woofer in the boot. All of this for $66k. 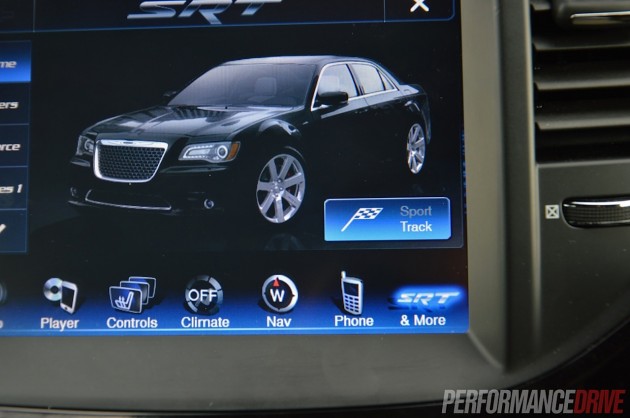 We have to admit, we were nervous about taking the big bruiser out to Wakefield Park. We gingerly drove out from the pit lane on the first lap, not really knowing how it would handle a set of dedicated twists and high-speed turns.

On the road, as we’ve found before, it’s simply not as composed, athletic, or confident in the corners as any of the rivals. It feels a little cumbersome and in generally doesn’t seem comfortable turning with speed. Bumps and corrugations in the road surface upset the precision of the steering too, which causes your confidence to diminish somewhat.

On the track, where the surface is consistently smooth and the corners are pre-determined, it’s a very different story.

Tip it into the first turn at Wakefield, which is a fast kink at the end of the main straight, and the 300 tucks in from around 180km/h and stays committed. This sets it up for the second corner which is a sharp yet widening turn with plenty of run-off – the ideal conditions for a bit of sideways action. It’s here where our driving faces turned from ‘eek’, to ‘you beauty!’

Whoever thought a 300 could drift so effortlessly, and joyously?

To provoke a drift in the 300 SRT8 all you need to do is give the steering a quick flick targeted at the apex, and then give the throttle a decent prod. From there you can modulate the slip angle using the bags of torque from the engine.

It’s no problem at all, remaining mostly balanced and on line for the length of the drift. It seems like it enjoys it as well. It’s like a dog running at the beach, turning to its owner with a big smile on its face; it can’t believe how much fun this is.

The 300 is easy to manage for most of the drift, and with the 300 being so long – over five metres – you can create some ridiculous angles and it won’t overtake itself.

It doesn’t have the most accurate steering, with some vagueness during various segments of the steering spectrum, however, communication through the wheel is acceptable and easily interpretable. 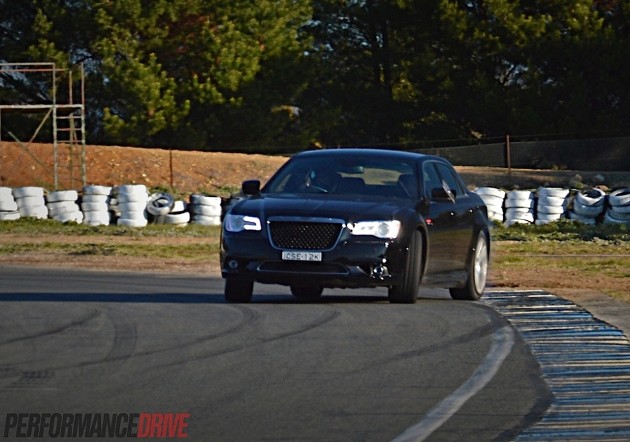 Aside from drifting and playing about, as fun as it is, the 300 SRT8 is great for attacking lap times.

Thanks to 360mm front and 350mm rear Brembo brakes, it pulls up time and time again with no real complaint. Even after countless laps during our test, the brakes had no major problem pulling up the 2012kg beast.

The limited-slip diff is very tight and controls any excessive inside wheelspin, so long as you don’t put it into an awkward situation, such as follow the racing line around a very sharp uphill hairpin and nail the throttle.

Speaking of nailing the throttle, when you unleash that 347kW on the straight it really pushes you back in your seat. It pulls hard and relentlessly, hitting around 180km/h in no time. With the on-board SRT timers we managed 0-100km/h in 4.5 seconds, and a quarter mile in 12.7 seconds.

It sounds fantastic throughout the rev range. We think it’s one of the nicest V8 soundtracks around. There’s no clever mufflers or variable intakes trying to make it sound better, artificially. This is pure V8 muscle, rumbling and growling deeply like a street machine.

In the end, the best lap time we could achieve at Wakefield Park was 1:13.2.

From what we can tell, the only part that stops this car from achieving seriously quick lap times is the transmission; it’s a fairly ordinary five-speed auto.

You can use the flappy paddles behind the steering wheel but there is no rev-matching or ‘blipping’ on the downshifts, which means it will only change down when it’s good and ready. It’s one of those units that you simply must get used to.

After a few laps you soon learn when and at what revs the powertrain will let you change down. Even so, it’s not ideal for overall performance and it doesn’t keep up with the tempo of the delightfully muscly engine that it deciphers.

The long-legged ratios aren’t much help with short bursts or sprints in between corners either. Please Chrysler, introduce the brilliant eight-speed here. 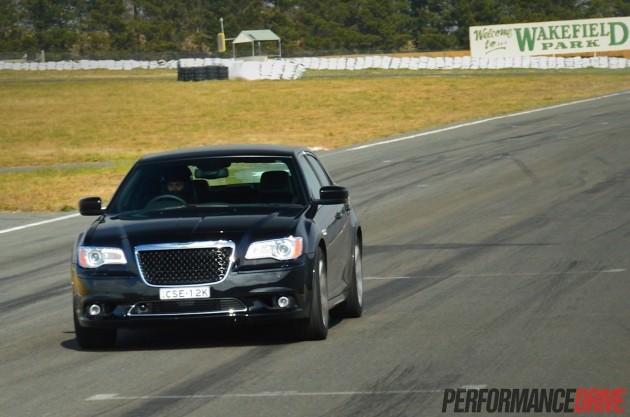 This was a massive surprise for us. We were very skeptical about the 300’s handling ability, like many other critics. However, it has blown us away out on the circuit. That ‘Track’ button is not just a marketing gimmick. It means it. This is a car you could thoroughly enjoy on a track day, like GP EXEC’s track days.

Out on the road you just have to give it some respect. The HEMI V8 is seriously powerful and it can gather momentum at a rapid rate. Being so effortless, it tends to catch you off guard, putting you over the speed limit with a mere stroke of the go-pedal. And if you approach corners with such laxity, you will need to be gentle and slow things down if there are bumps around.

So, it’s a cruiser for the street and a weapon at the track. Sounds good to us.

CONS:
– Five-speed auto not up to the enthusiasm of the rest of the car
– (Handling) feels bulky and unrefined on the road
– Steering not as consistent as rivals 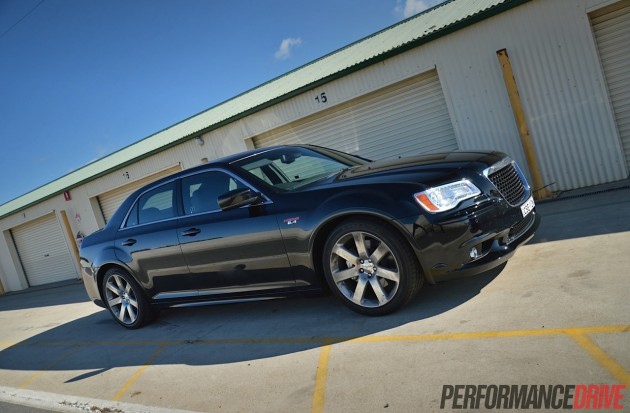