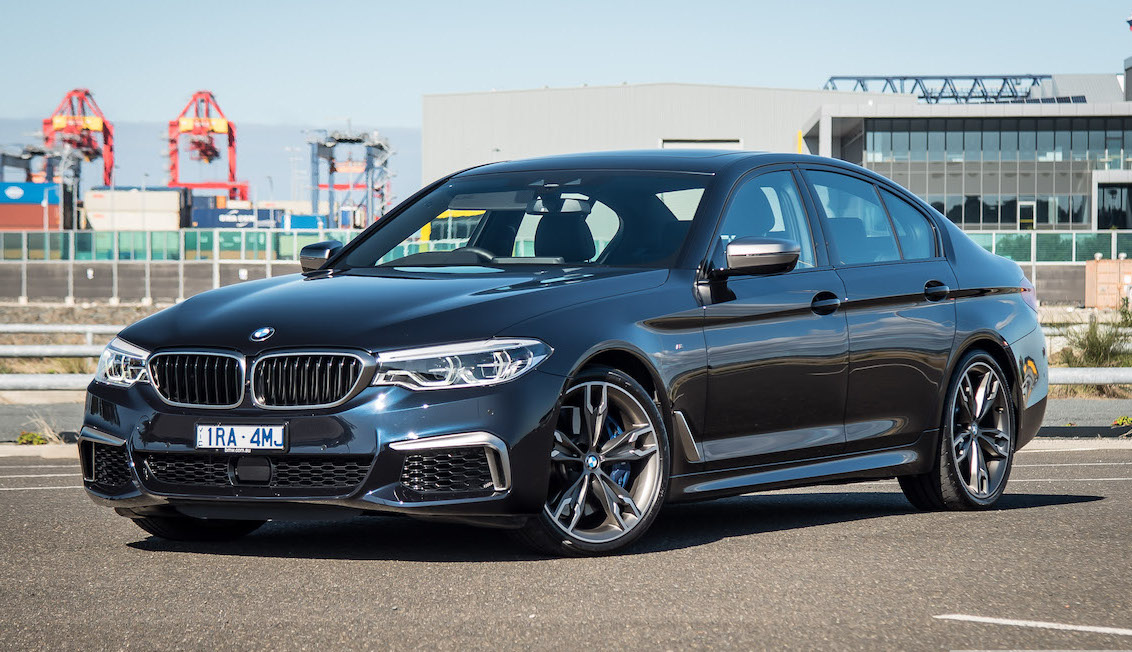 This is the car that Aussie cops should have instead of their 530d highway patrol cars. The 2020 BMW M550i xDrive. It is extremely fast and competent yet very versatile across varied conditions. It looks rather discreet and stealth, too. 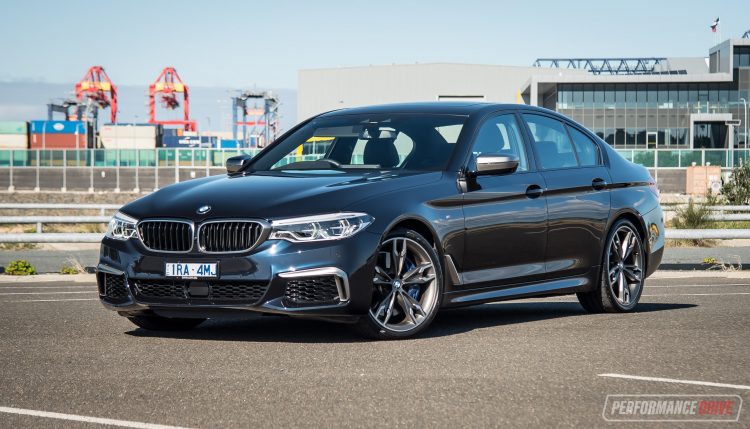 The M550i sits at the top of the regular G30 5 Series range. It’s a product of BMW’s M Performance sub-division, built at the company’s massive Dingolfing plant in Bavaria, Germany. But let’s get one thing straight from the start, this isn’t a sharp-edged track-ready super sedan. That’s what the M5 is for. This is much more stately than that. And we think it should attract a wider variety of buyers because of that.

If that’s not good enough, BMW also offers the M550i xDrive ‘Pure’ variant, which drops some indulgent features in exchange for a more appealing $134,900 starting price. 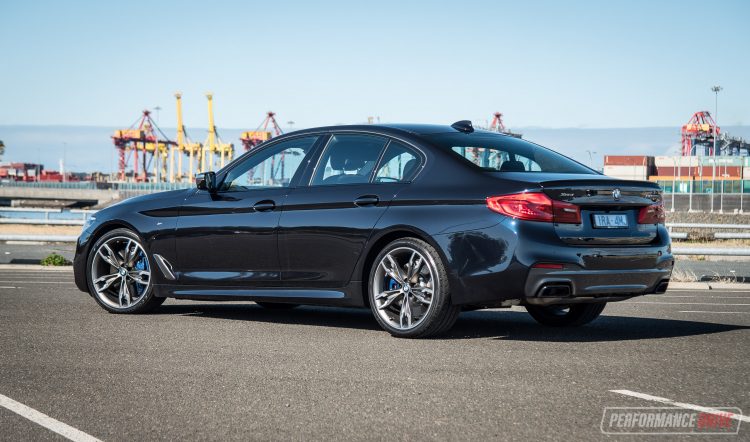 Sitting at the top of the 5 Series range means it automatically showcases a very high level of luxury and gratifying appointments. The interior is trimmed in high quality Dakota leather, with big hip-hugging sports seats in the front. We love that these seats are very supportive, and even come with adjustable side bolsters, but they also feature a flat lower seat cushion so most shapes and sizes can easily slide in.

Being a large sedan, the rear seat is open and accommodating. In Australia the M550i comes with four-zone climate control as standard, allowing rear passengers to set their own temperature. And there’s a pair of USB-C charging ports at hand. Outboard passengers are presented with copious amounts of legroom and headroom, and the sheer width of the seat is particularly impressive. However, the middle seat area is noticeably confined due to the thick driveline tunnel. Fortunately, those wide outer seats have heaps of leftover space in the footwells. 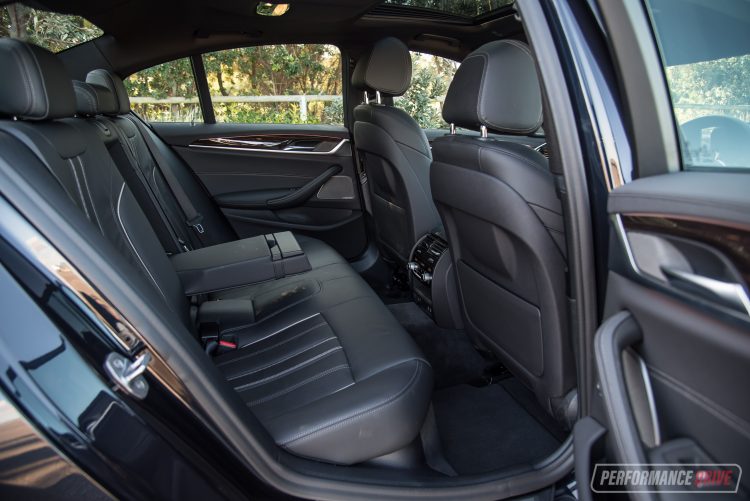 Entertainment is provided by a 12.3-inch media interface incorporating Apple CarPlay, sat-nav, vehicle status checks, and the full suite of BMW’s ConnectedDrive Services. Some of these include online-based speech processing, Remote Services which allow you to monitor your vehicle remotely, and online apps such as live weather and news.

This is all controlled via BMW’s handy iDrive dial on the centre console. As we’ve always said, any media interface that can be controlled through some kind of hand controller on the console is great. These arrangements usually help to reduce driver distraction. Although BMW’s screen does offer touch functionality, the iDrive controller is very intuitive, with a simple four-axis menu system and quick jump-to menu buttons around the main dial. 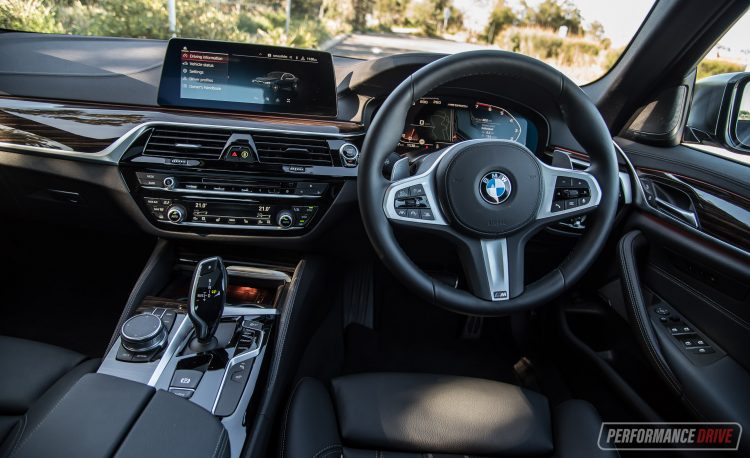 While most buyers are flocking to SUVs, the M550i is a good reminder that big sedans are very practical as well. The boot measures 530L, and, unlike the large sedans you may know of in the past, the rear seats can conveniently be folded down. There isn’t some tiny passage that only accepts a pair of skis. Here, the entire beach folds down and there’s a wide aperture that’ll swallow bulky items. It’s pretty much the width between the rear wheel arches.

We mentioned the Pure variant at the beginning. Essentially, it misses out on adaptive M suspension (although it still gets sports suspension), soft-close doors, the superb BMW Laserlight headlights, an electric sunroof, special air ionisation climate control, BMW Individual leather for the instrument binnacle, and metallic paint. So, really, the Pure is probably the one to go for unless you lust for this additional equipment and only desire the best that’s available. 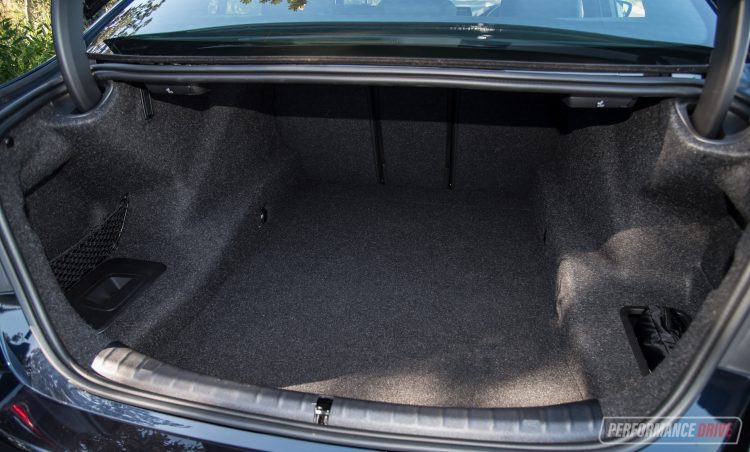 One thing you don’t have to be concerned about with the M550i is any potential detriment in comfort for the sake of performance and handling. The ride in the M550i is lovely. Almost perfect, in our opinion. There’s a distinct controlled yet absorbent behaviour from the adaptive M suspension. It absorbs sudden blows, like protruding pothole repairs and speed bumps, gradually yet with what seems like a deep compression range. Harsher bumps can cause the front end to almost bottom-out, however.

That’s in the default comfort mode. In this setting the M550i really is a great executive sedan. It’ll pleasantly cruise around the city and take you to your next meeting in a majestically refined manner. The electric rack and pinion steering is light and predictive, so it’s simple to park and thread through tight city streets. 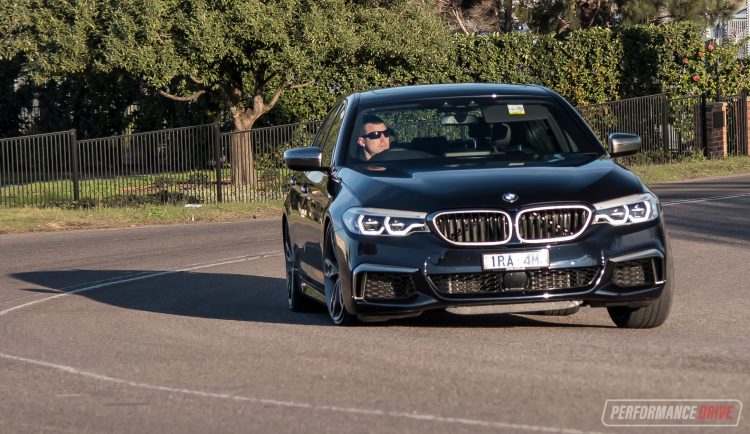 What’s also wonderful is the transmission calibration. This uses the common ZF 8HP eight-speed auto transmission – the same as many vehicles on the market at the moment, including some rival models. But here BMW engineers have provided the optimum calibration. It automatically shifts down, seamlessly, when rolling into a normal right-angle bend or street turn. Then when you need to start to apply power again, progress is effortless and smooth. It doesn’t try to hold onto higher gears like many others out there, often resulting in sluggishness followed by an abrupt down-shift.

If you’re considering the M550i there’s probably a decent chance you’re at least slightly interested in dynamic driving and enjoying some thrills on a spirited road. Well, that’s where the M550i’s beautifully bipolar personality shines. We must admit, when we first drove it, the suspension seemed almost too soft for a sport sedan of this calibre. But we soon found out that’s not the case.

Flick it into Sport Plus mode and the adaptive M suspension tightens up. Not too much though. It tensions the 5 Series but it feels like most of that tension is wound up into the second half of the suspension’s compression motion. In other words, the initial bumps and mere road imperfections are managed in a similar way as the Comfort setting. But then once you start pushing it and hitting bigger dippers and longer undulations during enthusiastic drives, there’s that extra level of bracing to ensure the wheels remain firmly planted. 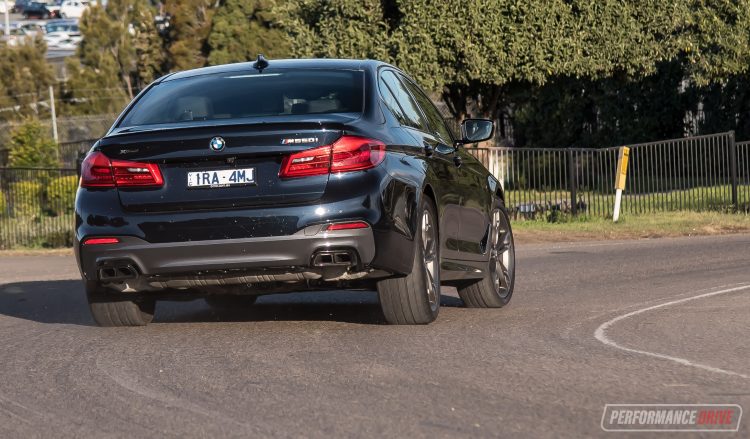 Planted is a great word to describe this car’s overall character. The xDrive all-wheel drive system has been tuned by M Performance to offer unyielding traction, in all weather conditions. The power delivery is slightly biased to the rear. This means oversteer is possible. Although you do have to try fairly hard. While it might not be the oversteer king like the M5, the xDrive system is still very playful and provides lots of feel and engagement.

And then there’s the engine. It’s a 4.4-litre twin-turbo V8 that develops a grin-inducing 390kW at 6000rpm, and a colossal 750Nm between just 1800rpm and 4600rpm. It’s no wonder this is all-wheel drive. With all of that torque available not far from idle, the tyres would instantly turn to mist if it were rear-wheel drive. As you can probably imagine, with the AWD system, acceleration off the mark is immediate. It just pulls and pulls, like gravity is on holiday. 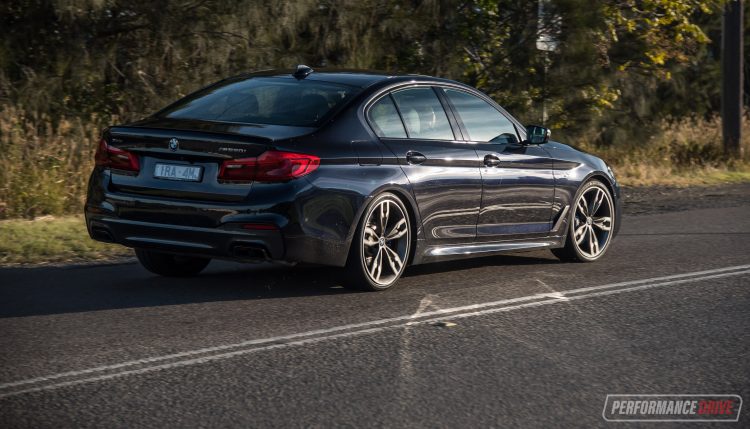 We clocked a best 0-100km/h run in just 3.81 seconds, and 0-200km/h in only 12.02 seconds. We also ran the quarter mile in 11.80 seconds at 198.3km/h. Figures like this are usually only seen on very hardcore performance variants (it easily beats the old M5), or outright supercars and dedicated super sports cars. You certainly don’t expect such performance from a big, comfortable, gadget-laden executive sedan like this.

Along a high-tempo cross country road, it’s difficult to think of another car that could be quicker in varied conditions. With each gear that’s pulled, the engine belts it through forcefully, and then it’s time for the next gear. It’s controlled aggression at its finest. There’s just the right amount of feel from the steering, with a bit of play and bodyroll to adapt and reform to suit the road, and the four-piston front and single-piston rear brakes with trademark blue-painted calipers provide relentless and repeatable stopping performance. As we suggested at the start, this thing would make an ideal police intercepter.

We know it’s a pretty silly comparison, but in some ways the M550i reminds us of the old top-notch Ford Falcons and Holden Commodores of not that long ago – the G6E Turbo and HSV Senator etc. Like those, this is a big, very accommodating sedan, that’s very comfortable and well-appointed, but also hugely fast. Obviously this is way faster and more refined than any Aussie icon, but you get what we mean.

Our recommendation is to go for the M550i xDrive Pure variant. You’ll save around $15,000 and still get everything this machine stands for. We’re just so glad this one made it to Australia and that it is part of the regular showroom range – we usually miss out on cool stuff like this.

CONS:
– Save yourself $15,000 and go for the M550i xDrive Pure
– Almost steps on the M5’s toes
– Front end can bounce, almost bottom-out over bumps in default comfort mode