Volkswagen has announced equipment updates for the model year 2013 Volkswagen Passat range, including introducing satellite navigation on all variants. 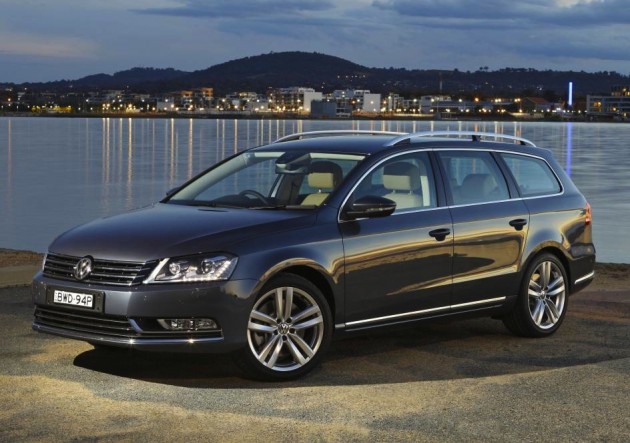 From the base model Passat 118TSI up to the range-topping V6 FSI, all Passat models come with satellite navigation (RNS510) as standard. This includes a high-resolution touch-screen display with 2D and 3D map functions, a 30GB hard drive for media storage, an SD card slot, as well as DVD functionality. The system is also integrated in with the standard reverse-parking camera system.

For the top-of-the-range Passat V6, sporty paddles shifters are now behind the steering wheel to support enthusiastic driving. The paddles are connected to Volkswagen’s renowned DSG dual-clutch automatic transmission, which backs the 3.6-litre direct injected V6 producing 220kW and 350Nm. The V6 is available in sedan and wagon format, and is capable of 0-100km/h in 5.5 seconds (5.7 for the wagon).

Other changes with the update include an electric tailgate on wagon variants as standard. The tailgate also features a new ‘Tip-to-Run’ function which closes the hatch automatically if a user attempts to shut it manually.

When optioned with the Driver Assistance and Visibility Package, the Passat also incorporates Side Assist lane change assistant which detects vehicles travelling in your blind spot. A symbol then illuminates in the according side mirror to warn you. The pack comes with Bi-xenon headlights and Lane Assist.

The MY2013 update is scheduled to arrive in Australia in September. Full prices are as follows (excluding on-road costs):