Images of the 2013 Volkswagen Golf GTI Mk7, or at least a near-production concept version, have been revealed online. These breaking images were first picked up by Autobild in Germany, providing an early glimpse of the new model before it goes on sale next year. 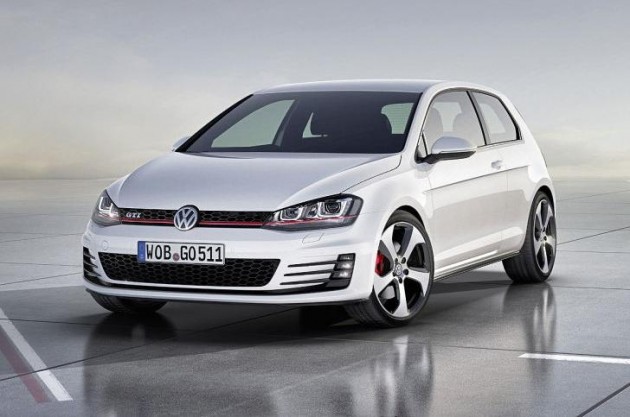 According to the publication, this is a concept version that will debut at the 2012 Paris Motor Show later this week. The eventual production model is set to look pretty much identical though, remaining in tune with the Golf GTI’s subtle yet sporty personality.

The 2013 Volkswagen Golf GTI Mk7 will be a very important vehicle, not only for Volkswagen, but also for the motoring industry, as the Golf GTI has generally set the benchmark in this segment for decades. It manages to blend quality, innovation, and performance, all wrapped up into a practical and fuel-efficient package. 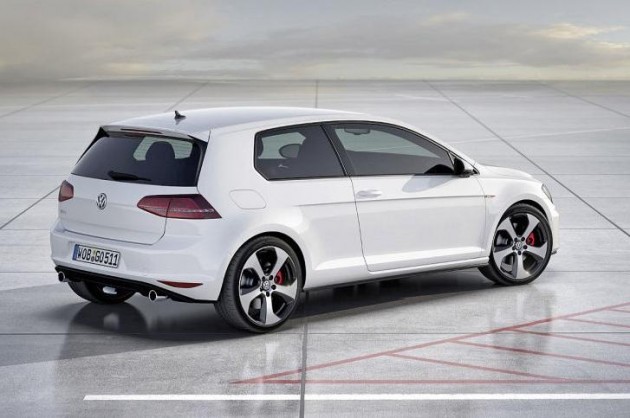 Various advances are set to bestow the 2013 Mk7 version, including a new mechanical limited-slip differential for the front axle for improved cornering performance and acceleration, as well as a revised engine with more power and torque.

Official figures are yet to be announced, however, it’s been fairly well understood in the industry that power will be around the 164kW mark, while torque will peak at around 340Nm. This is a reasonable jump from the current Mk6 GTI’s 155kW and 280Nm ratings.

As for performance, the MK7 Golf GTI is set to cover the 0-100km/h dash in 6.6 seconds, while also offering a combined cycle fuel economy rating of just 6.6L/100km.

For those wanting more zing, Volkswagen will apparently be offering a ‘performance pack’ option for the first time with the Mk7 GTI, taking power up to around 171kW. With the power boost we can expect 0-100km/h to come up in 6.5 seconds. 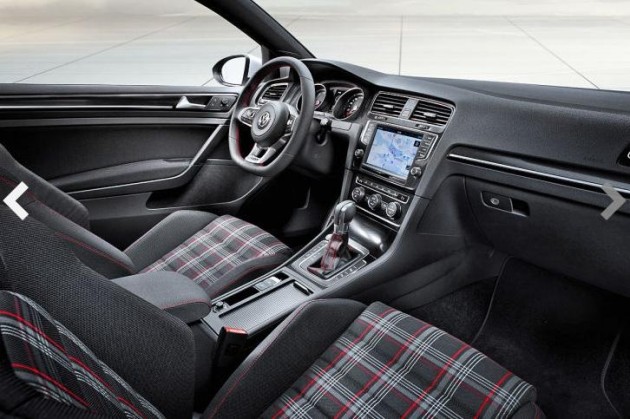 Like the normal 2013 Volkswagen Golf Mk7 base models, the GTI will be larger than the current model, with a longer wheelbase and a wider track providing more interior room and boot space.

These initial images also reveal the interior of the Mk7 GTI, again, at least in pre-production form, giving us a preview of that traditional tartan fabric seat pattern with highly bolstered bucket seats.

There’s also the new dash layout inside which is given to all Mk7 models, with the centre fascia slightly focused/angled towards the driver. It also includes a larger LCD multimedia interface than the current model.

Other details revealed include twin exhaust outlets, this time on either side of the car instead of being paired together like the current model, as well as a honeycomb-style front grille with red highlights.

Like the current model, the Mk7 GTI will come with sports suspension, lowering the car by 15mm over the standard Golf. A set of 17- or optional 18-inch alloy wheels are also believed to be part of the package.

Internationally, the new model will go on sale during the first half of 2013. Australian showrooms are likely to receive the fresh model shortly after.

We’ll be sure to provide any further information or updates on the concept or production model over the course of the Paris show.