Porsche has officially pulled the wraps of the new 2013 Porsche 911 GT3 high performance track-ready 911. Based on the 991 shape, the new model is the most powerful naturally aspirated mainstream 911 ever made, and the most technically advanced GT3 ever. (Aside from the ballistic Ruf RGT-8, which features a 4.5-litre V8 producing 405kW) 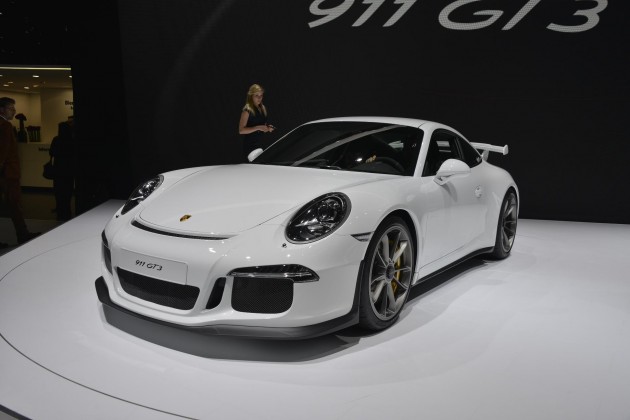 The new unit features dry-sump lubrication, some forged titanium internals, hydraulic valve clearance compensation, direct injection, and an ‘demand-controlled’ oil pump. As a result of the new lightweight materials, the engine is 25kg lighter than the previous unit.

The new engine also features dynamic engine mounts – previously an option – which can counter the tilting and vibrations of the engine dependent on how the driver is using the throttle. 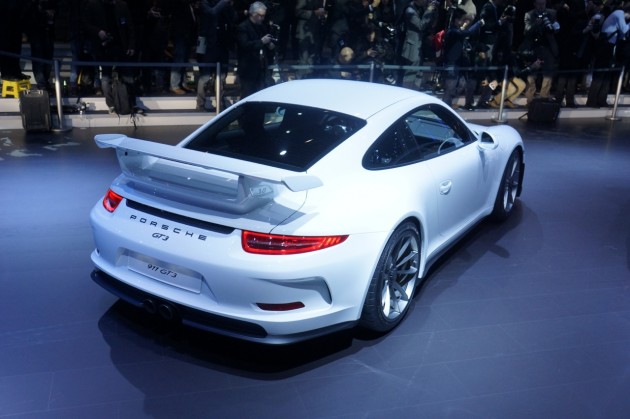 One of the biggest and perhaps most controversial aspects of the 991 GT3 is the fact that it comes only with an automatic transmission. It’s not quite an automatic though in the traditional sense, it’s a seven-speed dual-clutch (PDK) unit which can be used like a racing sequential type, sending power to the rear wheels. This is the first time Porsche has offered the GT3 with an automatic.

The transmission features a ‘paddle neutral’ clutch feature whereby a driver can pull both shift paddles at the same time to engage an ‘open clutch’. Once released – so long as the traction control has been turned off – it behaves like a clutch pedal that has been released very quickly. Porsche says,

“This function offers two principal advantages: the driver can, for example, neutralise the driving behaviour of the vehicle when understeering in a wet curve by pulling the paddles, and thus ‘dip the clutch’ and re-direct additional cornering force to the wheels of the front axle.

“The second aspect relates to individual influence of the driving dynamics due to the pulsed onset of the driving force when engaging the clutch. Comparable to a traditional clutch with a manual transmission, the rear of the vehicle can be consciously destabilised for dynamic leaning into the curve. Furthermore, the driver can use the paddle-neutral for accelerating from a standstill. As is the case with manual transmission vehicles, the driver alone decides on how to accelerate using clutch and accelerator foot, without any assistance from drive and dynamic handling control systems.”

Another big change with the new model is the introduction of rear-wheel steering. The electronic device is able to pivot the rear wheels either the same direction as the front or the opposite direction, depending on speed. This helps the 911 maneuver around corners as quickly and efficiently as possible.

The 991 GT3 also comes with a new variable differential lock for the rear wheels to distribute torque for the best acceleration. This, paired with a very adjustable racing-type suspension – height, toe, camber – leaves for a perfect track weapon. 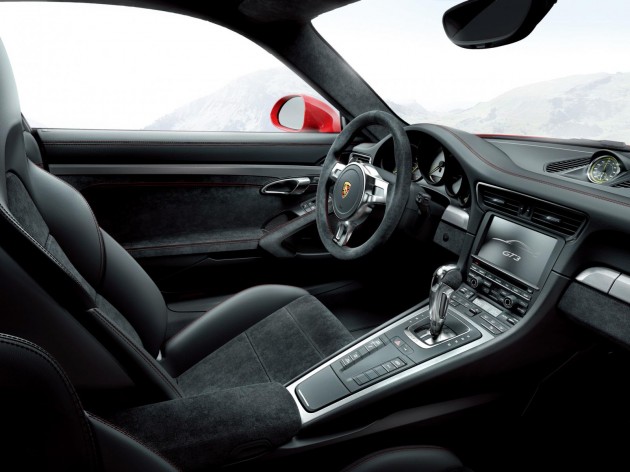 Keeping with the lightweight focus, the 991 GT3 gets 20-inch forged alloy wheels, an extensive use of aluminium in the construction of the body, including the roof, bonnet, and doors, resulting in a 13 per cent weight reduction compared with the outgoing 997 version. Despite being lighter, the 991 body is also up to 25 per cent more rigid, providing pin-sharp responses and direction changes.

The new model will go on sale in Europe in August, with prices starting from 137,303 euros in Germany.

Prices and market entry dates for Australia are yet to be locked in, however, Paul Ellis, Porsche Australia public relations manager, told PerformanceDrive it will arrive towards the very end of this year.