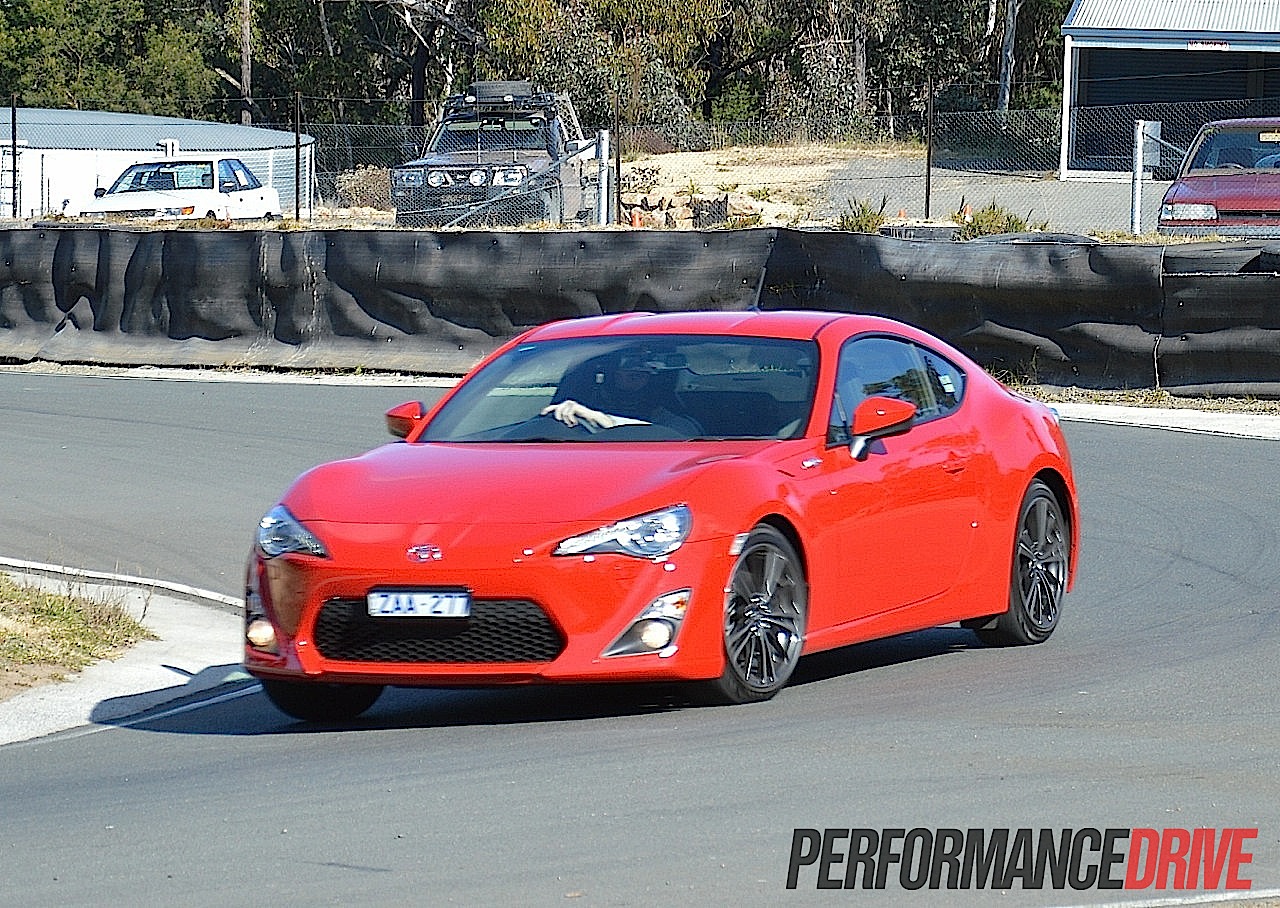 As we’ve seen with the Toyota 86 GT, the new base model coupe is the perfect platform for building up a track car, or even a tuned street car project. So how does the top-of-the-range Toyota 86 GTS automatic stack up? Is it a desirable package as is? 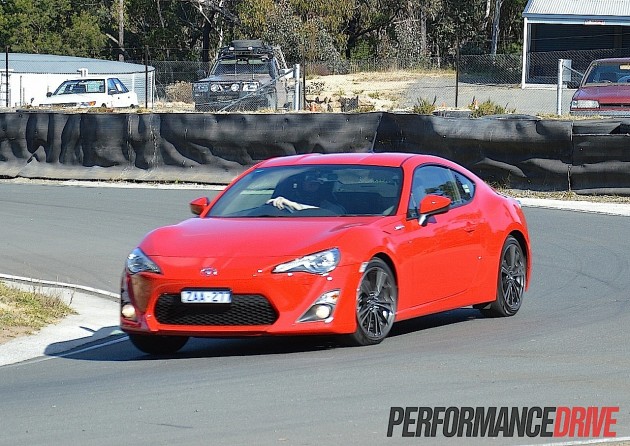 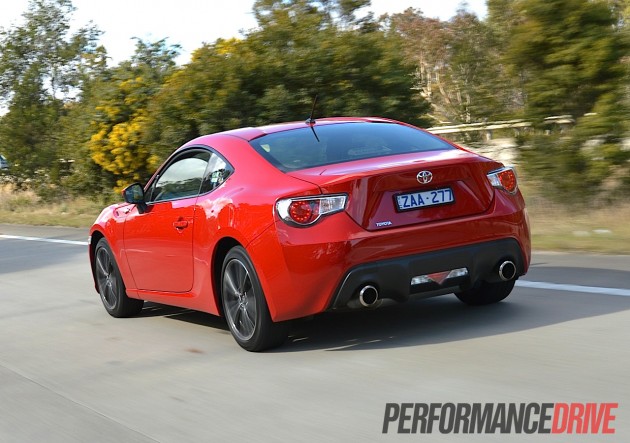 As you probably already know by now, the Toyota 86 is a joint project sports car built by Subaru, with the Subaru BRZ.

It’s a daring move by the two to produce a vehicle for a niche market, especially as it is built completely from scratch, and doesn’t share a platform with any other existing model. This means lots of investing in development and engineering.

In other words, both companies are taking a pretty big punt with their respective models.

Under the bonnet of all sits a Subaru-derived 2.0-litre boxer engine. It produces 147kW of power and 205Nm of torque. That might not sound like much, but in a car weighing in at only 1298kg (auto GTS), it provides adequate zip. 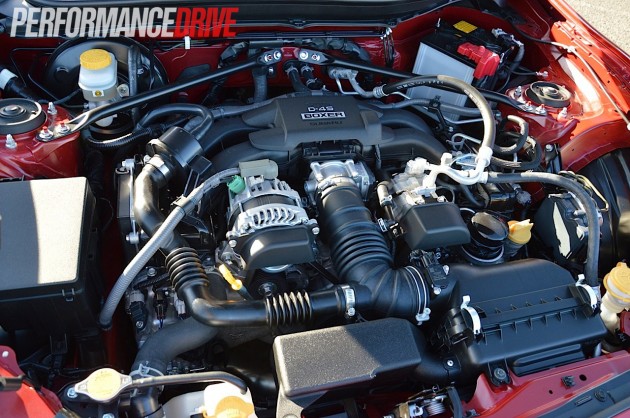 For Toyota, the project has been the perfect opportunity to rekindle its sports car spirit. After producing loads of driver’s cars over the years, including the Celica, Supra, and, of course, the Toyota Sprinter AE86, the new coupe has been welcomed with open arms.

Speaking of the Sprinter, this is where the ’86’ name comes into it. Nicknamed the ‘Hachi-Roku’ – literally translating to ‘eighty six’ – the Sprinter is a legend in the driver’s car world. This modern successor is aiming to do the nameplate, and its fans, proud.

So why would you pay $8000 more for this GTS version over the base model?

It’s all about equipment and features. And not just on the inside.

The GTS comes with a larger tyre and wheel package consisting of 17-inch alloys with 215mm tyres, as opposed to the lighter weight 16-inch items on the GT with 205mm tyres.

With the GTS getting added equipment, it weighs 20kg more than the GT according to the Toyota Australia website, so it makes sense for Toyota to fit larger brakes. The bigger brakes prove Toyota is dedicated to ensuring complete engineering balance. Many carmakers wouldn’t normally bother going to this level of detail. 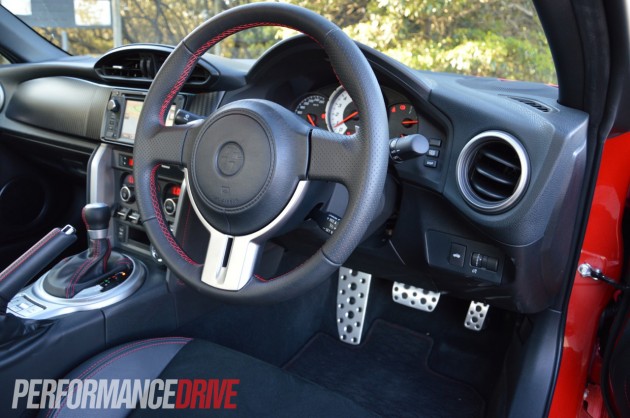 Inside, the dash features a completely different media unit with a 6.1-inch LCD touch-screen and satellite navigation system. There’s also a more suave set of bucket seats with heating functions.

Again, it’s the attention to detail that is most interesting. The dash features a carbon-fibre-look panel compared with the GT’s blank plastic, and the rear-view mirror is also rimless, with the glass curved off at the very edge.

Obviously, comfort and features aren’t really what this car is about, but it’s worth a mention if features are important to you. The GTS also scores climate control air-con, and keyless entry with a start button (not fitted to the GT).

There are power appointments such as windows and mirrors, as found in the GT, along with cruise control, and a six-speaker audio system. 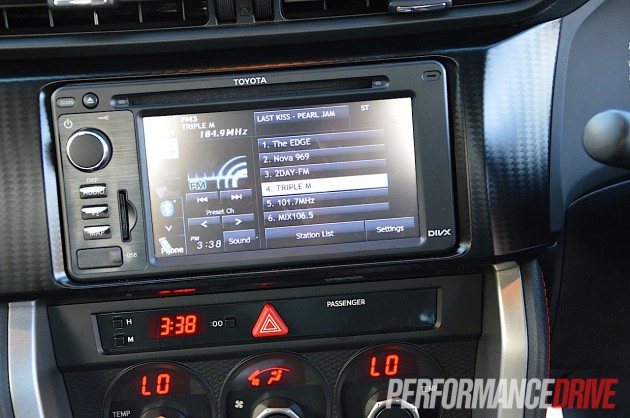 Like in the GT, the audio system is a bit of a disappointment. In a sports car like this, some decent sounds are a must. The speakers sound tinny and become distorted when you crank it up. Toyota has developed the 86 with aftermarket modifications in mind, so maybe the company assumes most buyers will be upgrading the system?

Also on the letdown, the integrated touch-screen controls are difficult to see with glare becoming a fairly frequent issue. It’s also fiddly to use, especially while driving.

Pressing a small button to seek to the next track or channel on the inaccurate screen means there can be plenty of wrong button pushing going on, and taking eyes off the road. This is unusual for Toyota, as its layouts are mostly user-friendly.

The 86 isn’t just attractive to look it, it’s slippery as well, with a co-efficient drag 0.27. This means it can cut through the air efficiently, assisting in economy and performance.

On the outside, the only visual clue that this is the GTS is the set of 17-inch alloy wheels. Other than that, it’s the same aggressive body with a sharp front spoiler and a chunky rear diffuser.

As mentioned in the GT review, the 86 is yet to be tested by ANCAP. The Subaru BRZ has been tested however and has been rated five stars.

The GTS comes with the same usual assortment of safety features as the GT, including ABS, Brake Assist, VSC and traction control, and seven airbags. 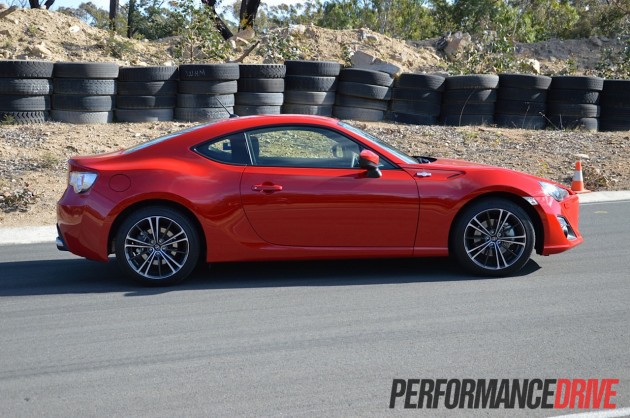 When you put your foot down, the 86 has no hesitation to get on with the job. Unfortunately, the six-speed auto does hamper the excitement to a certain degree. Especially in day-to-day conditions. You find it constantly needs to change gears to find the right ratio for the road ahead. The fun paddle shifters do take away some of the pain though as it will follow your commands. Again, this is while driving it in a normal, almost grandmotherly manner.

Hit the VSC Sport button and give it all a poke with a stick and everything changes. The auto transmission has been inspired by the eight-speed auto used in the Lexus IS F (video review here). It can change gear in just 0.2 seconds, with downshifts accompanied by a racy blipping of the throttle.

The engine has a strikingly lively nature, although, this isn’t supported by aural pleasure. The sound of the engine isn’t the best for a sports car, there’s no soft way to say it. It reminds us of the days when you’d rip the air cleaner off a Toyota Corolla to gain a few extra kilowatts. An aftermarket exhaust may fix this.

In terms of acceleration, we timed 0-100km/h in a reasonable 7.9 seconds. This was achieved in VSC Sport mode after building the revs and releasing the brake. 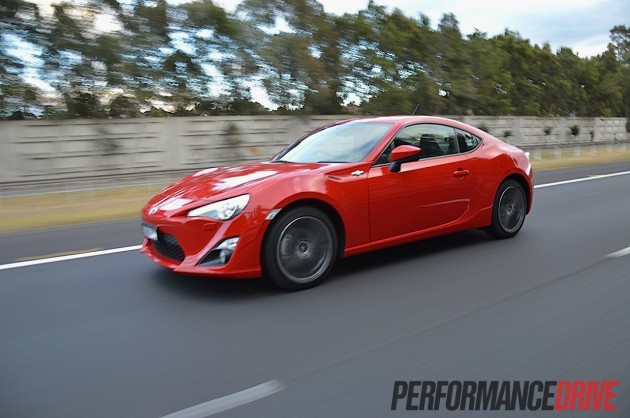 Fuel consumption figures are impressive, at 7.8L/100km for the manual GTS, and 7.1L/100km for the auto. But these figures rise significantly if you drive it the way it wants you to drive it. We averaged 9.2L/100km during our week with the car.

We’ve said it before and we’ll say it again, the handling of the 86 is just fantastic. With an overall height of 1285mm and a weight distribution of 53:47, it’s so flat and balanced it’s like it’s on rails. The electric steering is direct as well and provides positive feedback which urges you to keep on pushing.

It’s a super-fun car to drive when you’re feeling frisky. Using the paddle shifters through a mountain pass really puts a grin on your face.

Out on the track is where the 86 shines. At Marulan Driver Training Centre, the GTS was a joy to throw around. It’s so rewarding, and forgiving.

Through the slower speed corners, the low overall weight means the 86 doesn’t want to push wide with understeer. You can get back on the power very early too and it just kicks the tail very briefly before focusing on to the next corner.

The larger brakes on the GTS did seem to perform better than the already very good standard GT items. We experienced no brake fade during our time at the track, and the pedal didn’t drop like it does in most cars after a bit of heated driving. 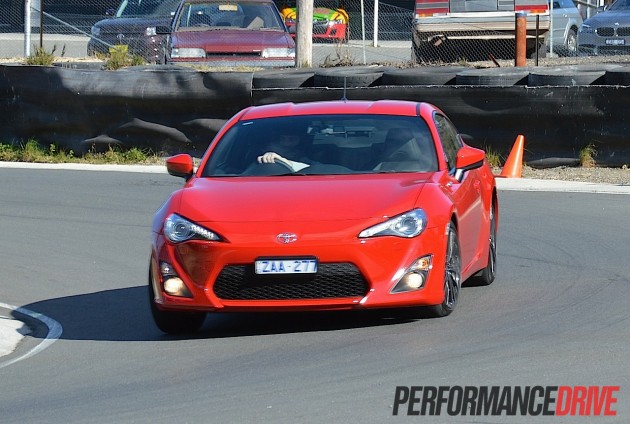 We were a bit disappointed in the drifting ability of the automatic version. It’s not necessarily the transmission’s fault, it works well and changes down gears when you want it to (mostly). It just feels as if the ratios could be spread more evenly in the lower gears. This may upset acceleration though.

The engine isn’t especially torquey either. With just 205Nm on tap, even a base model Volkswagen Polo 66TDI diesel can surpass the grunt with its 230Nm. And it’s the torque that pulls you out from corners, and, more importantly, helps to initiate drift action.

Peak torque is also reached at a very high 6400rpm, which means you have to be revving it lots before even thinking about tail-out antics. On the other hand, you can quite easily get a small drift happening by using weight transfer alone.

If you’re planning on venturing to the track with your 86 on a fairly regular basis, we’d suggest opting for the manual. 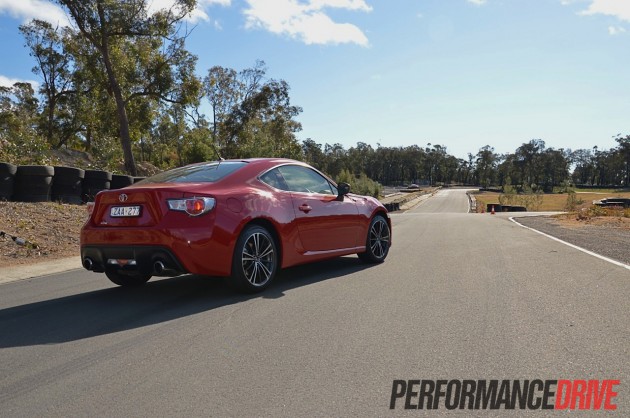 The 86 is the definition of a sports car; it’s rewarding, lots of fun, very well balanced, and totally up to the task of taking a thrashing. You almost want to buy one just to thank Subaru and Toyota for taking the time to build it.

At a fierce base price of only $29,990, it is definitely the makings of an exhilarating purchase.

If you like your features and equipment, the GTS is well packaged and is available with the optional factory Toyota 86 aero bodykit (not available on the GT).

If all you want to do is build a rally car out of it, or simply drive the pants off it, the GT variant will suit you just fine.

The only trouble with the 86 – and BRZ – is they’re all pretty much sold out until next year. 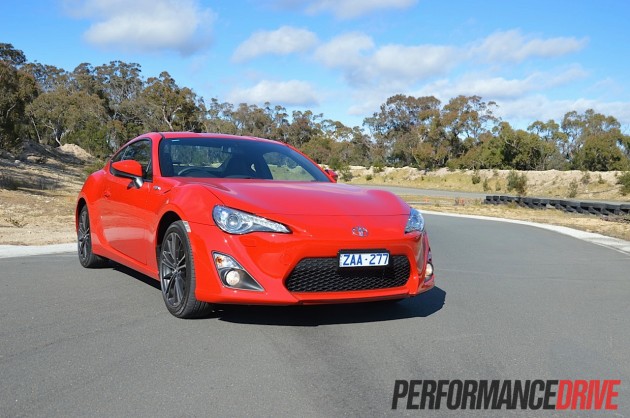