Images of the 2013 Porsche 911 GT3 991 have been leaked online ahead of the car’s debut at the Geneva Motor Show this week. This is the first time the 991 generation of the track-ready model has been seen in full. 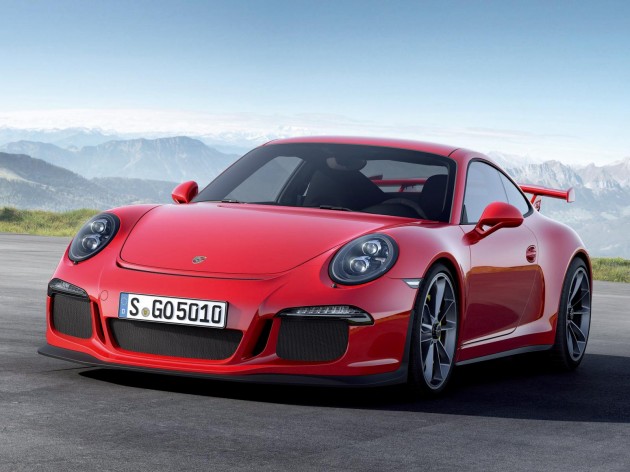 As we predicted yesterday, the 911 GT3 will be one of two 911s that Porsche is planning to unveil at Geneva. The other will be the 911 GT3 racing version, not legal for the street.

This, on the other hand, will be entirely street legal. Like the outgoing GT3, the 991 comes with various track-ready components such as an aerodynamics package with a large rear wing and a deep front chin spoiler.

It will also come with high performance cross-drilled multi-piston brakes, serious suspension likely with some sort of adjustability, and a focused, partially stripped out interior with sporty bucket seats and an optional roll cage.

By the looks of it, the interior won’t be quite as stripped out and focused as the outgoing 997 model. There appears to be a central multimedia LCD screen, lots of buttons including for climate control, as well as a dual-clutch automatic transmission shifter poking up through the middle.

In the very back, specifications are still yet to be uncovered. It’s expected to come with a 3.8-litre naturally aspirated flat-six engine producing around 335kW of power. Acceleration from 0-100km/h is likely to pop up in under 4.0 seconds, with a top speed of 322km/h.

We’ll keep you updated with all of the official details the second we hear more.