The 2013 McLaren Mercedes MP4-28 Formula One car has been revealed at the company’s headquarters in Woking, UK. Although the car looks fairly similar to the 2012 version, underneath has been completely revised. 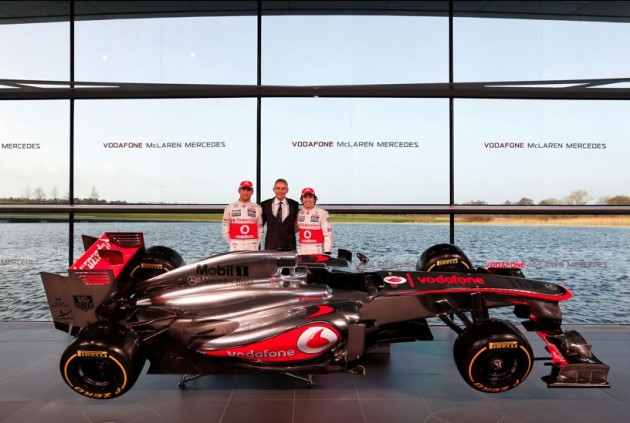 One of the major changes for this year’s car includes the adoption of a pull-rod front suspension layout, also seen on Ferrari’s 2012 F1 car. This is likely to bring changes to the way the McLaren handles, and it will be interesting to see how the car measures up against the field in terms of cornering speed.

The rear end of the car also seems to be redesigned somewhat, with an even tighter and more intricate set of aerodynamic fins and scoops. Last year’s and this year’s McLaren Mercedes driver Jenson Button recently spoke about the new car, saying,

“It’s always exciting when you think you have a good possibility to fight for world championships. It might look similar because it has the same colour scheme, but this is completely different to last year – under the skin it’s so, so different. That’s why I think it’s an exciting season for us.”

Like last year’s car – the MP4-27 – the new McLaren F1 car is powered by a 2.4-litre V8 that weighs just 95kg. It’s supported by a KERS electric motor system which can offer 60kW power boosts.

Speaking of the KERS power boost, this year the FIA has introduced a new rule which only allows power boosts to be used in specific areas of every track. This could make overtaking areas even more exciting to watch for spectators.

The cars will be driven by Jenson Button and newcomer to the team Sergio Perez.

The first round of the 2013 F1 season will kick off in Australia on the weekend of March 17.