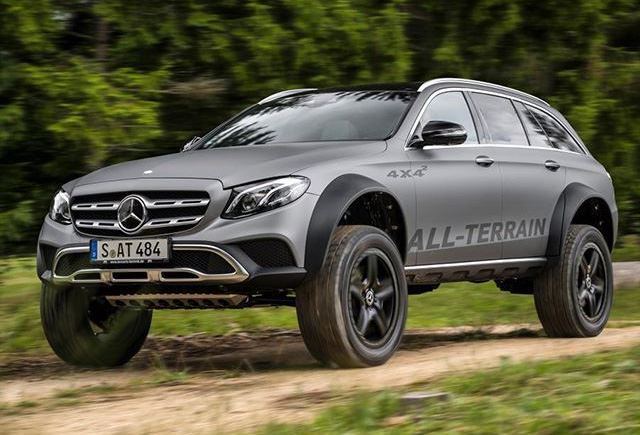 How’s this for a crazy concept. It’s based on the recently-introduced Mercedes-Benz E-Class All-Terrain, but it’s been morphed into a super 4×4 for serious off-roading.

Mercedes has a habit of building crazy off-road vehicles, such as the G-Class-based G 500 4×4 squared, and the insane 6×6. Both of these actually went on the market too, despite seeming like wild concept-only ideas.

For the latest harebrain idea, Mercedes is celebrating the launch of the E-Class All-Terrain with the 4×4 Squared. As you’ve probably noticed, there has been extensive modifications to the humble wagon to help give it serious off-road cred.

We only need to reel off some of the specs to get mouths watering. A completely re-engineered suspension setup helps give the E-Class a whopping 420mm of ground clearance, up from 160mm of the standard E-Class All-Terrain.

Not only that, the wheelbase and track dimensions are different, and portal axles have been implemented helping to lift the axles clear off the ground, above the centre of the wheel hubs.

Some of this ground clearance comes thanks to massive 285/50 tyres wrapped around 20-inch wheels. These sit inside custom pumped wheel arches which give the E-Class a menacing and imposing presence.

To make sure the engine can even turn the big tread and portal axles, Mercedes has squeezed in its 3.0-litre twin-turbo V6 petrol engine producing 250kW. This replaces the 2.0- and 3.0-litres diesel options in the standard All-Terrain.

At this stage the mental machine is just a one-off concept and probably won’t see any showrooms any time soon. But it’s good to see Mercedes-Benz does have a good sense of adventure. You can check out Auto Bild‘s exclusive drive impression video below, in German.