Honda has revealed the facelifted 2013 Honda CR-Z sports hybrid at the Indonesia International Motor Show in Jakarta. The model update gets some styling tweaks, new wheels, and the introduction of a ‘Sport Plus’ button. 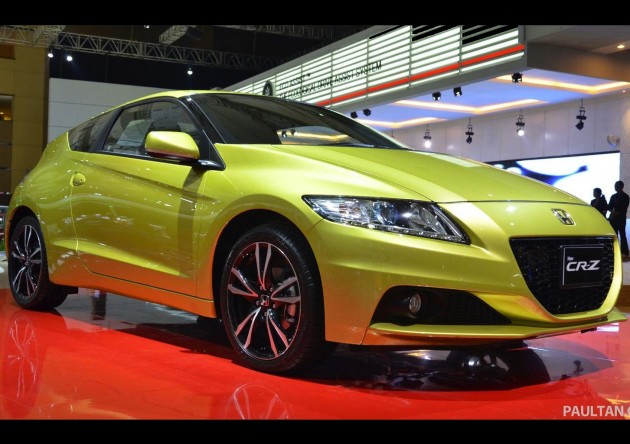 These images, courtesy of paultan.org, show the new model receives just a mild update. It comes with a revised front bumper bar with a new grille layout, while at the back there’s a new rear diffuser section for a slightly more aggressive look. There’s also a set of newly designed 17-inch alloy wheels.

Inside, as far as we know, most of the interior is the same as the current 2012 model. Except for one main thing; a Sport Plus button. In the current model there are three different driving modes – Eco, Normal, and Sport – with each changing the throttle sensitivity and altering power source dependability.

The Sport Plus mode is expected to further enhance the sporty character of the CR-Z by tightening up the throttle response and changing the engine mapping for a pure driving character.

Drive comes from the 1.5-litre petrol four-cylinder and Honda Motor Assist electric hybrid system. According to reports power is boosted from the current 91kW to 99kW for the CVT auto versions, and 100kW for the six-speed manual.

The new model is expected to go on sale in Australia during the first half of 2013.