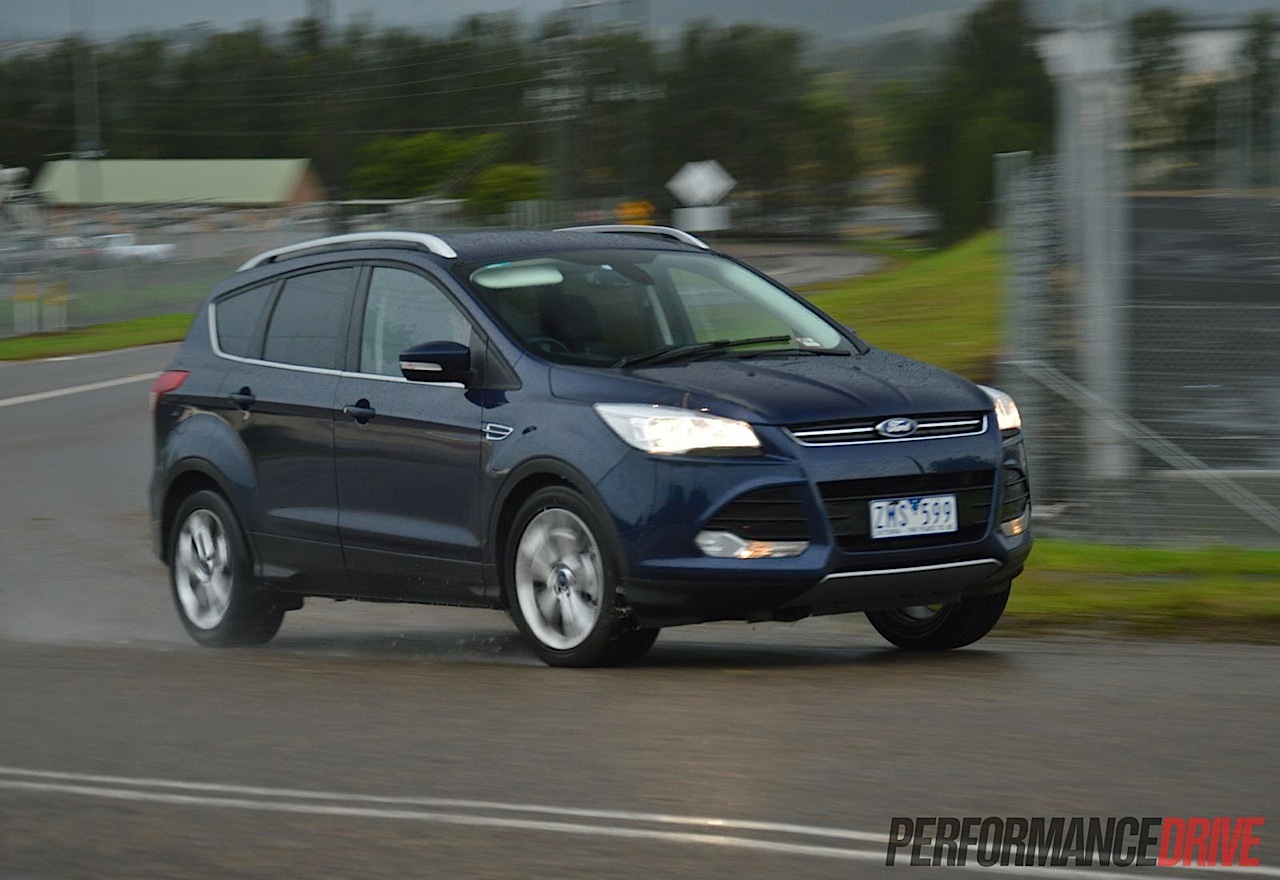 The newcomer in the SUV market from Ford is finally in line with the rest of the world. The Ford Kuga was first introduced locally in 2012 to replace the relatively boring and underperforming Ford Escape. But it was replaced with a model that had been selling internationally since 2008 – on the tail end of the model life cycle. Ford was desperate to grab a piece of a market that now accounts for about 10.7 per cent of all new vehicle sales in Australia. 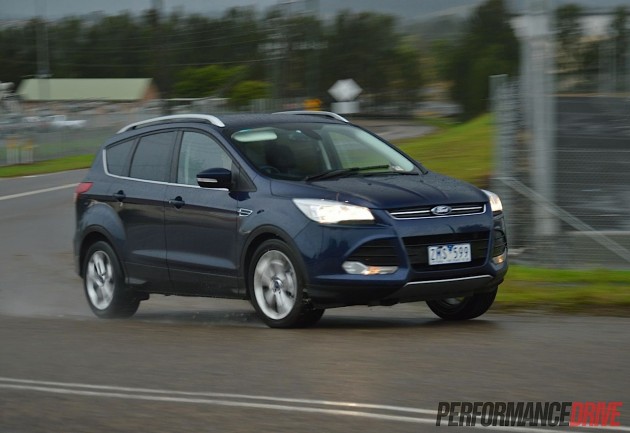 At the bottom, we have the well-appointed Kuga Ambiente, then the mid-spec Trend (as tested), and the bells and whistles Titanium.

There’s a choice of two differently tuned 1.6-litre turbo four-cylinder EcoBoost petrol engines; one is matched with the 2WD Ambiente producing 110kW and 240Nm, and the other made for AWD models producing 134kW and 240Nm. The AWD is also available with a 2.0-litre TDCi four-cylinder turbo-diesel (as tested – not available in the Ambiente).

Pricing has been made fiercer for the new model. The entry-level is now $27,990, $36,240 for the Trend, and $44,470 for the range-topping Titanium. This places the Kuga in the market as a serious option for customers; within $1000 of matching the price of the Honda CR-V, Toyota RAV4, Mitsubishi ASX and the Volkswagen Tiguan.

There’s quite a large jump between each variant in terms of pricing, but you do receive an abundance of features with each. Here, we put the Trend TDCi under the microscope. It retails from $39,240 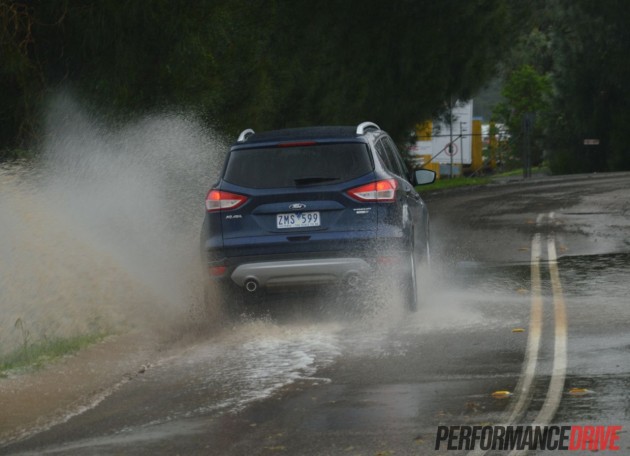 The broad offering of models for the new Ford Kuga, price-wise, means it is spread across a vast budget span. For the economy-conscious, the Ambiente comes with a 3.5-inch multifunction screen, cruise control with steering mounted buttons, push button start/stop, front and rear parking sensors, heated side mirrors, front and rear fog lamps, 17-inch alloy wheels, and most of the usual stuff you’d expect on a modern vehicle.

Diesel engines have certainly made their mark in the industry in the past decade or so. The 2.0L TDCi is a first for the Kuga in Australia. It produces 120kW and 340Nm, returning a frugal 6.3L/100km for the combined cycle consumption test – a 10 per cent improvement on the previous overseas diesel option.

There are MacPherson struts up front and a control blade independent suspension setup at the rear. And like with most decent cars these days, the steering system is all electric and speed-sensitive, making for better economy with less load on the engine. The other benefit is engineers are able to tune the steering for the optimum feel, relevant to the vehicle type.

Looking at the exterior, you can see the Kuga hasn’t changed all that dramatically from the 2012 version. Though, it has been brought in line with Ford’s current global design language that envelops a very fluid and aerodynamic look. The front and rear lights have been stretched out to flow around the edges of the body, and the sides are concave slightly inwards to help exaggerate a higher sweeping waistline – very similar to Hyundai’s latest cars.

Ford has managed to design the new Kuga with more interior space without altering the 2690mm wheelbase. Much of the added room has been devoted to the rear passenger area for those long weekend family trips. Overall dimensions haven’t changed too much; 81mm longer, 4mm narrower and 5mm lower.

Compared with the rest of the medium-size SUV market, the Ford Kuga accommodates perfectly for four adults with plenty of comfort and space at hand. Unless you have a huge family, the Kuga’s size suffices for almost all circumstances. The rear bench is high and well spaced back from the front seats, leaving ample legroom. The somewhat tall ceiling also helps with headroom front and rear.

In the front, it only takes one glance at the dash to see the Ford Kuga is designed to appeal to a youthful audience who like gadgets and technology. It must have been a difficult task for Ford, as the Kuga doesn’t execute this as well as other manufacturers.

After lengthy use, you do get used to the fidgety menus and complex controls. However, some of the buttons are difficult to fathom and some are camouflaged within the sharp futuristic dash contours. Visually, the interior layout is ultra-modern and stylish, which should be applauded – maybe it will age well? We especially liked the higher-than-usual, fresh blue resolution screen in the instrument cluster.

Another pleasure of the interior is the Sony stereo system that produces clear sound with plenty of bass. It supports Bluetooth phone and live streaming, and all that USB/IPod/Aux/Mp3 stuff.

In the very back, the Ford Kuga offers 406 litres of cargo space, which is not much when you compare it to the Honda CR-V (556 litres), the Mitsubishi Outlander (477 litres), and the Toyota RAV4 (577 litres). It does have a low loading boot floor and loads of nifty storage compartments and cup holders spread around the cabin. 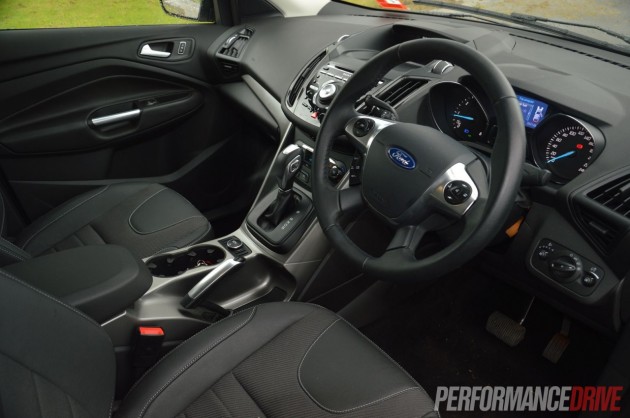 To keep that youthful appeal Ford has obviously strived towards in developing the Kuga, performance plays a fundamental part. Although it’s not the most powerful engine in its class, the TDCi pulls along with respectful pace. Torque builds from low in the rev range, and top end isn’t bad. We timed 0-100km/h in 9.9 seconds which is only 0.1 seconds slower than the 134kW 1.6 turbo EcoBoost petrol, according to our stopwatch.

The new diesel does offer a wide spread of accessible power and torque too, comfortably bringing the Kuga up to speed from slow speed corners and the such. It’s always nice to have even more grunt, such as with the Mazda CX-5’s 129kW and 420Nm, but it is more powerful than many of its key diesel rivals; Mitsubishi Outlander (110kW), Nissan X-Trail (110kW), Toyota RAV4 (110kW).

Of course, being a turbo-diesel, it’s almost a given that it is prudent on fuel. Under our real-world tests, we averaged 8.2L/100km, despite the official 6.3L/100km average – interestingly, when we tested the 1.6 EcoBoost earlier this year we averaged 8.3L/100km. It will set you back about $90 for a full tank of diesel, lasting approximately 700km.

With all the jam packed features, the Kuga weighs in at a hefty 1749kg. This means all that torque is very necessary. Off the paper, the Kuga never feels underpowered, or heavy for that matter. The engine is lively and reactive to your demands. Even with a full load, you’re seldom left short. This is also helped by the six-speed automatic being decisive and responsive to the conditions.

It works well with the versatile engine, making for a smooth and responsive driving experience. We appreciate how the gearbox provides plenty of back pressure to assist in braking when holding onto those lower gears.

Being German designed, the Kuga has a distinct Germanic quality about it when it comes to suspension and steering. It demonstrates confidence and control, even handling Australia’s rugged bitumen with poise and sturdiness. Hitting those larger potholes at higher speeds jolts the body around a little, but comparatively, it rides well.

And the same notion goes with the Kuga’s handling. The steering can be overly sensitive at higher speeds (depending on what you’re used to), and it handles more like a sporty car than a soccer mum SUV. The high SUV centre of gravity is barely noticed.

First developed in the Focus, the Kuga uses what Ford calls ‘torque vectoring control’. It applies engine torque to individual wheels to assist when cornering. For instance, turning left, more torque is sent to the right-side (outside) wheels to push the vehicle around.

It’s a fun SUV to drive. It’s one of those vehicles that you can toss between corners and generally throw it around in a playful manner, with confidence. The positive on-road attitude also spreads across when you’re off road. 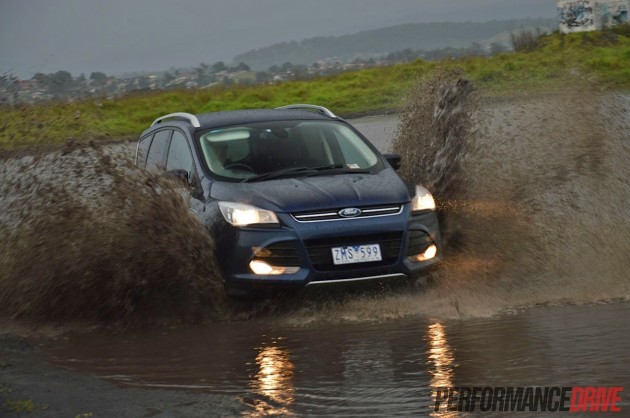 Like with most SUVs, the Kuga’s ‘intelligent’ all-wheel-drive system preemptively reassesses traction and readjusts the power split to each wheel to give the best possible blend of traction and handling. We’re impressed by the live feedback it provides, in the form of a unique cluster that exhibits the torque demand of each wheel at any given moment.

Dimension-wise, the Kuga stands on the dirt with a capable stance thanks to a significant amount of ground clearance (198mm). It presents an approach angle of 22 degrees, 17.5 for the break over, and 27.8 degrees for the departure angle. Given this, we found the Kuga to be one of the more capable soft roaders on the market. But obviously, if you require super adventurous off-roading capabilities, this category has its limits. 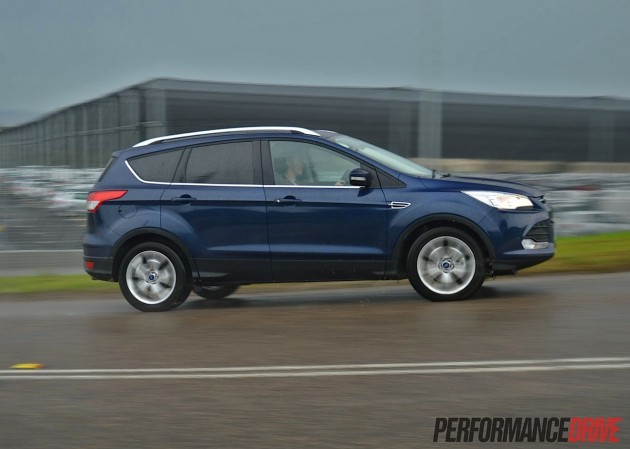 The 2013 Ford Kuga is designed to evolve around three main characteristics: fun and smart technologies, fuel efficiency, and safety. With the hands-free tailgate (Titanium only), Ford’s intelligent all-wheel-drive system with torque vectoring control, a flashy dash layout, and a super high ANCAP safety score of 36.33 out 37, we feel the Ford Kuga executes all three attributes marvellously, without one hampering the other.

There are notably high levels of craftsmanship and precision poured into the all-new Kuga. For example, Ford claims they have engineered the car in such a way that the spaces between all panels are less than 0.5mm. Even being a diesel, sound and vibration levels are among the lowest in its class.

According to VFACTS, the Kuga is thus far shaking up the mix among its rivals. So far this year Ford has sold 2552 examples, making it the ninth best-seller in the 22-vehicle segment. With a starting price of $27990, and the addition of a diesel to the line-up, there’s now plenty of market to soak up.

Keeping up with the current trends, Ford offers the reassurance of capped price servicing until 60000km, up until the end of 2013.

CONS:
– Small cargo space compared with rivals
– Not the most fuel frugal out there
– Large jumps in price between the range 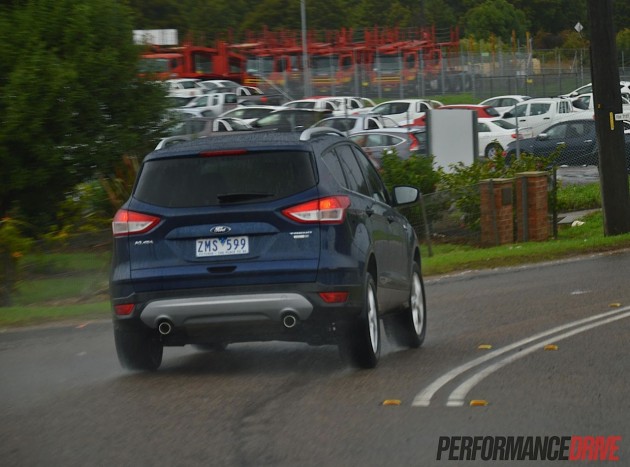