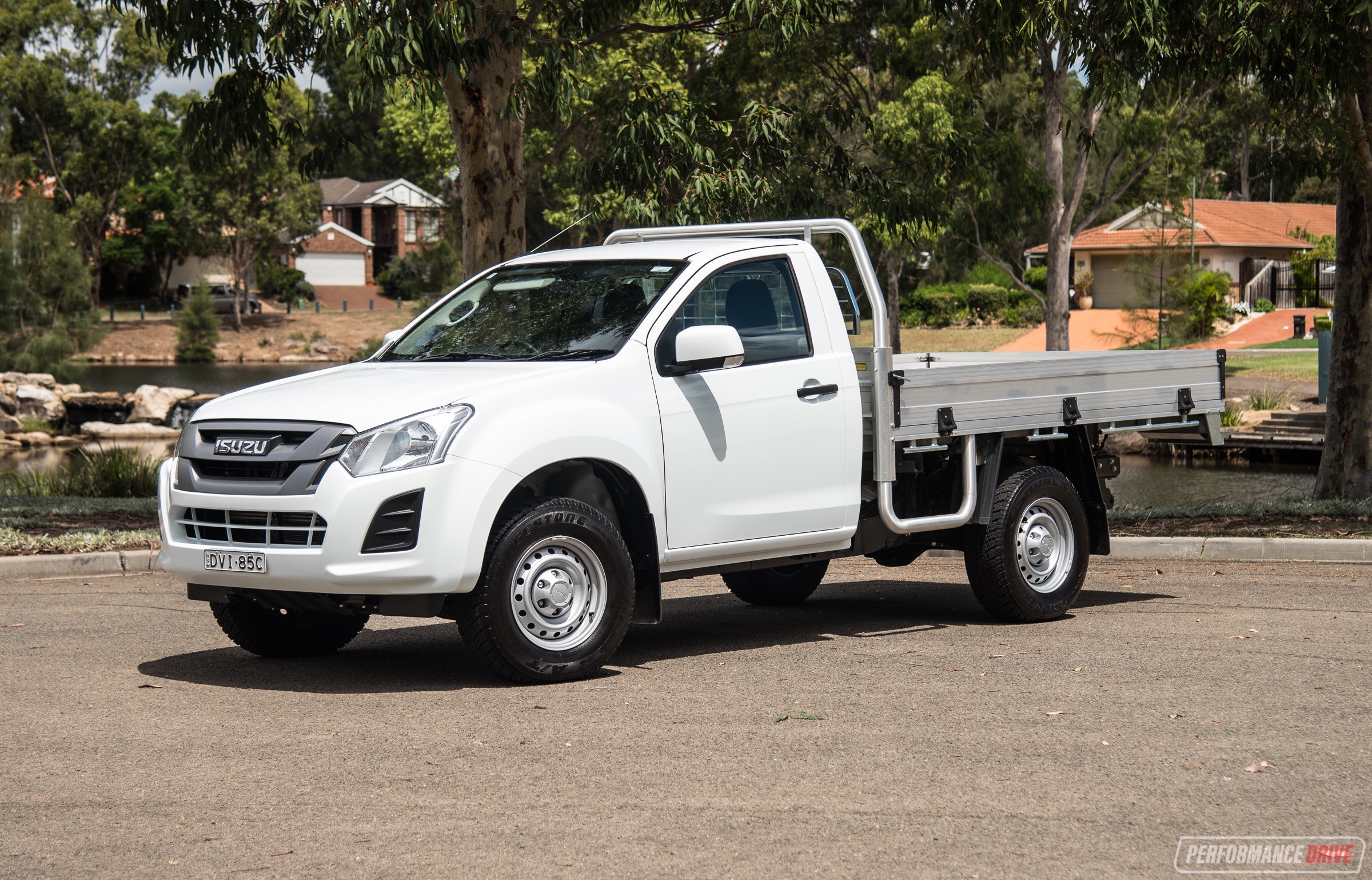 Isuzu is expected to introduce an update for the D-Max and MU-X range any moment now, but until then, let’s take a look at the hardest working horse in the MY2018 stable. We’re talking about the D-Max SX 4×2 single-cab, equipped with the High-Ride pack. 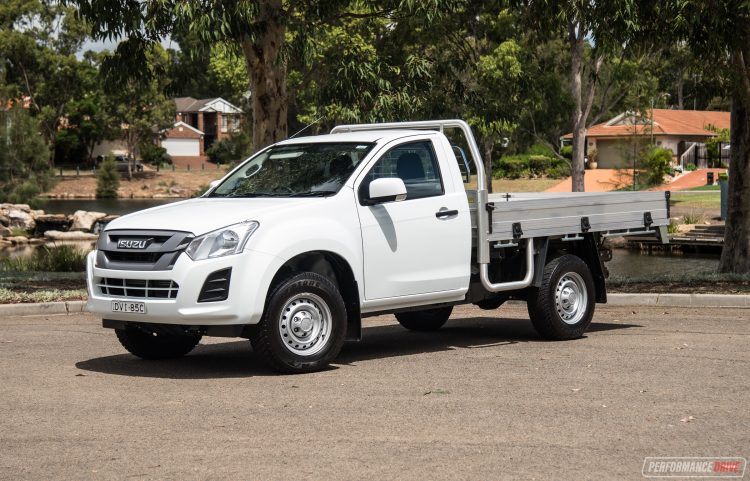 Unlike some of the rivals, the entry single-cab D-Max comes with the full-size, 130kW/430Nm 3.0-litre turbo-diesel four-cylinder engine that’s offered in the rest of the range, including the flagship LS-T and LS-U models. It is the largest-capacity four-cylinder in the class, and as such, it is one of the most powerful diesels for the single-cab segment. Who cares? Well, if you’re looking for a strong work mate this high-capacity, high-torque setup could help make your day just that little bit easier. 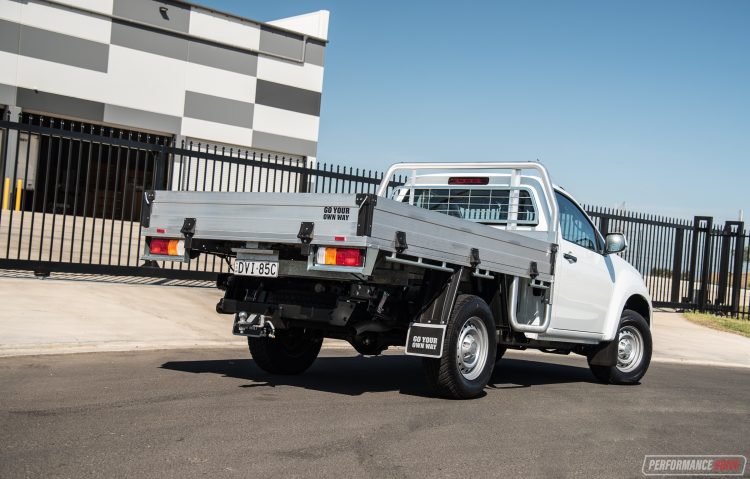 The current D-Max’s cabin is sparse and basic. And that’s perfect for a workhorse as you don’t want or need frills and luxuries wearing out and slowing you down. This is a cabin you can instantly warm to, and immediately understand where everything is and how everything works. That’s not to say it lacks the important stuff, though.

Up on the dash is the same 7.0-inch touch-screen media interface as featured in most other D-Max variants. It comes with Bluetooth connectivity, USB and aux-in support, and DVD/MP3 playback. This feeds your favourite tracks through a surprisingly beefy four-speaker stereo. Honestly, we’re surprised how good the stereo is in here –maybe it’s due to the compact two-door cabin acting like a giant speaker box.

What the screen doesn’t come with is a rear-view camera, which is a bit of a letdown considering the importance of such safety tech these days. However, due to the rear windscreen being just behind your head, the visibility out the back is very clear if the load you’re carrying isn’t tall. 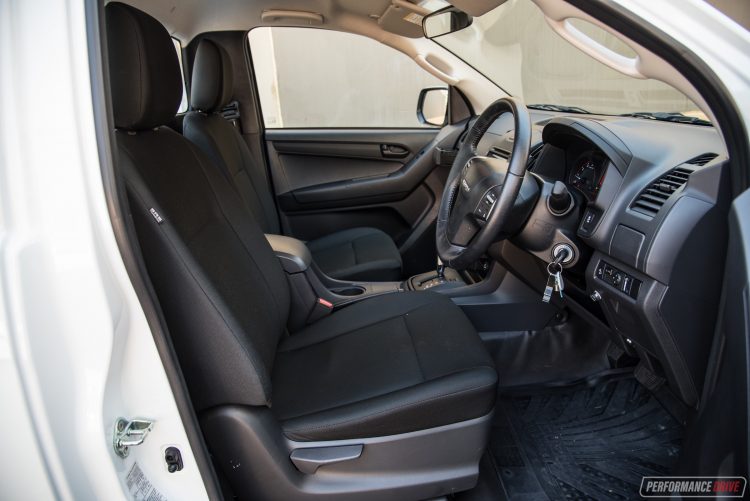 Seating space is more than adequate, with good headroom and legroom, and there’s a general sense of airiness helping to reduce any chances of claustrophobia. We do find it a little bit difficult to find the perfect driving position, as is the case with most utes on the market at the moment. The steering column only offers tilt adjustment and not reach, which doesn’t help, but the leg span and arm span seems slightly off as well, in terms of the ideal ratio.

There are plenty of storage options around, including two small cup holders on the console and two more, deeper pull-out holders near the dash vents. Bottle holders in the doors and big pockets help with long-distance touring, while the dash features two glove boxes, and a tray sits up the top in the middle to secure frequently-used loose items. You can tell Isuzu has used real-world feedback in coming up with the layout of this cabin, as it does seem ideally suited to a busy working day. 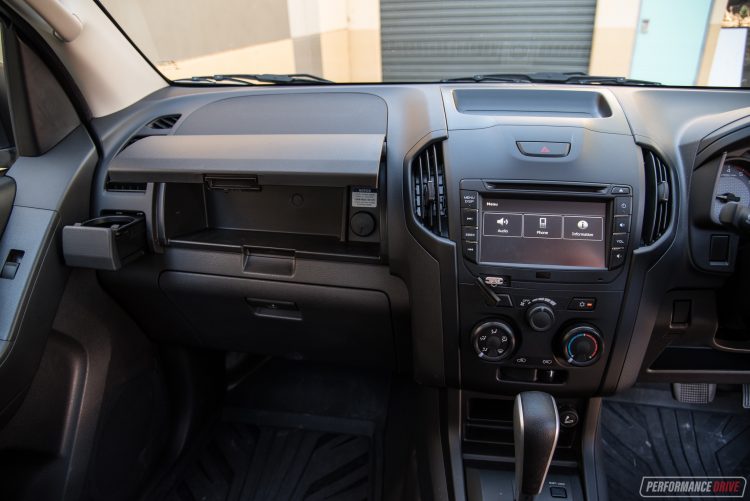 So, what about the High-Ride, what’s the difference? Basically, you get 16-inch steel wheels wrapped in slightly more heavy-duty and chunkier 245/70 tyres, compared with the 15-inch steelies and 215/70 tyres on the standard ride version. The ground clearance is raised as well, offering 225mm here against 190mm in the standard Low-Ride version. The different suspension arrangement also contributes to a higher braked towing capacity of 3500kg, against 2500kg. However, the payload is stamped at 1349kg in the Low-Ride and 1294kg in this High-Ride.

On that note, the gross combination mass is higher in this High-Ride, at 5850kg compared with 5350kg. And this contributes to an overall higher load-carrying capacity. With a kerb weight (includes fluids) of 1656kg, the High-Ride is able to carry its full 1294kg payload in the back and has a left-over towing capacity of 2900kg, excluding driver and passenger. In the same scenario, the Low-Ride’s kerb weight is 1601kg, leaving a towing capacity of 2400kg when carrying the full 1349kg payload (excluding passengers). Obviously you can mix and match these, carrying less payload and tow more, and adjust as needed. But whatever way you look at it, the High-Ride is the more heavy-duty option. 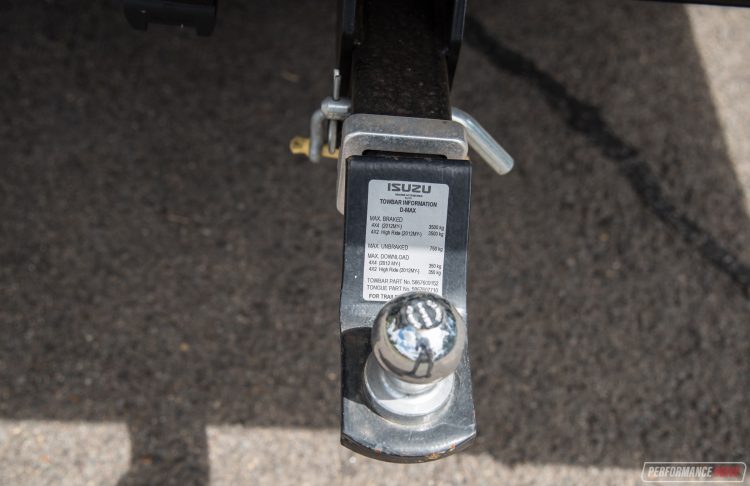 Being relatively light in weight compared with the common dual-cab offerings, the SX feels fairly brisk around town. That 430Nm is available from 2000rpm, and helps to really push the ute off the mark. In fact, if you encourage the accelerator pedal enough it will result in exciting wheelspin. Our 0-100km/h timing with the Vbox, out of three runs, returned a best time of 9.68 seconds. This is definitely quick enough for a workhorse like this. Overtaking is also effortless during the ideal parts of the rev range (2000-3000rpm). If you try to push it too hard and provoke high revs, the engine noise becomes a bit agitated and the experience doesn’t feel as effortless.

There isn’t really any need for more ratios. The six-speed auto is well-matched to the engine, and, again, if you remain in the ideal parts of the rev range the engine is able to provide some strong surge to pull through any gear. Highway cruising is maintained at around 1500rpm, which resonates well with fuel consumption. Speaking of which, the official rating is 7.5L/100km on the combined cycle, and we managed an easy 9.0L/100km in mostly point-and-shoot driving conditions. 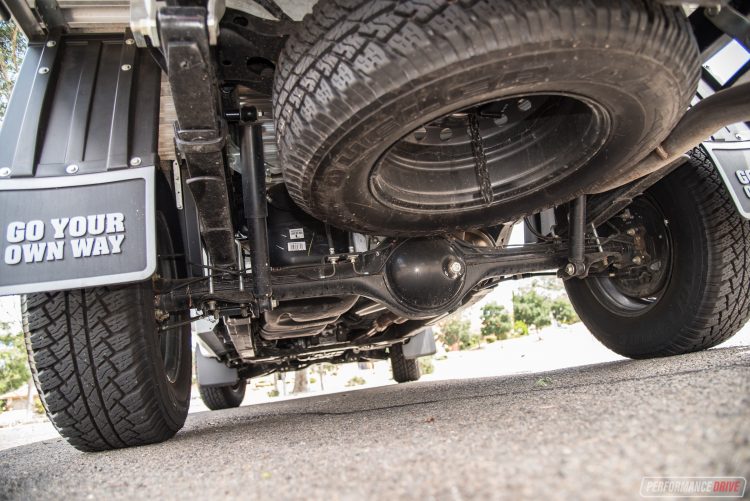 Featuring a live axle, leaf-sprung rear end, the ride can be jiggly over crappy roads. However, the weight/load you’re carrying does make a big difference. If you stack up the rear with some tools and so on, the ride does settle noticeably. And this is exactly how you want it. There’s no point in having a more settled and compliant ride when you’re not hauling goods in the back, because most of the time you are likely to be carrying something.

In saying that, the handling is quite good when you’re not carrying much. The industrial-strength tyres aren’t exactly designed to handle serious lateral pressure, but they hang on with reasonable confidence in this setting. Fill the tray and the tyres become stressed sooner. The steering feel and engagement is also dependent on the weight you’re carrying. But overall the SX is a pleasant and competent rig, and certainly meets the class benchmarks in most areas.

The D-Max SX is one of the most powerful single-cab diesels in the class, with very impressive load-hauling capability. It’s also very easy to drive, with a practical and reasonably well-packaged interior. Due to its overall approachability and user-friendliness, driving something like this day in and day out won’t add to the stress of your day. The only potential red flags that we can see is the lack of a rear-view camera (available as an option), and its four-star ANCAP safety rating. Both of these might put off some buyers and even fleet buyers.

PROS:
– Easy to drive and manoeuvre
– One of the most powerful/torqueiest 4CYL diesel single-cabs on sale
– Vinyl floor and thick rubber mats
– Surprisingly good stereo
– Strong towing and payload capacities

CONS:
– 4-star ANCAP
– Rear camera an option only
– Engine isn’t as refined or as quiet as some rivals