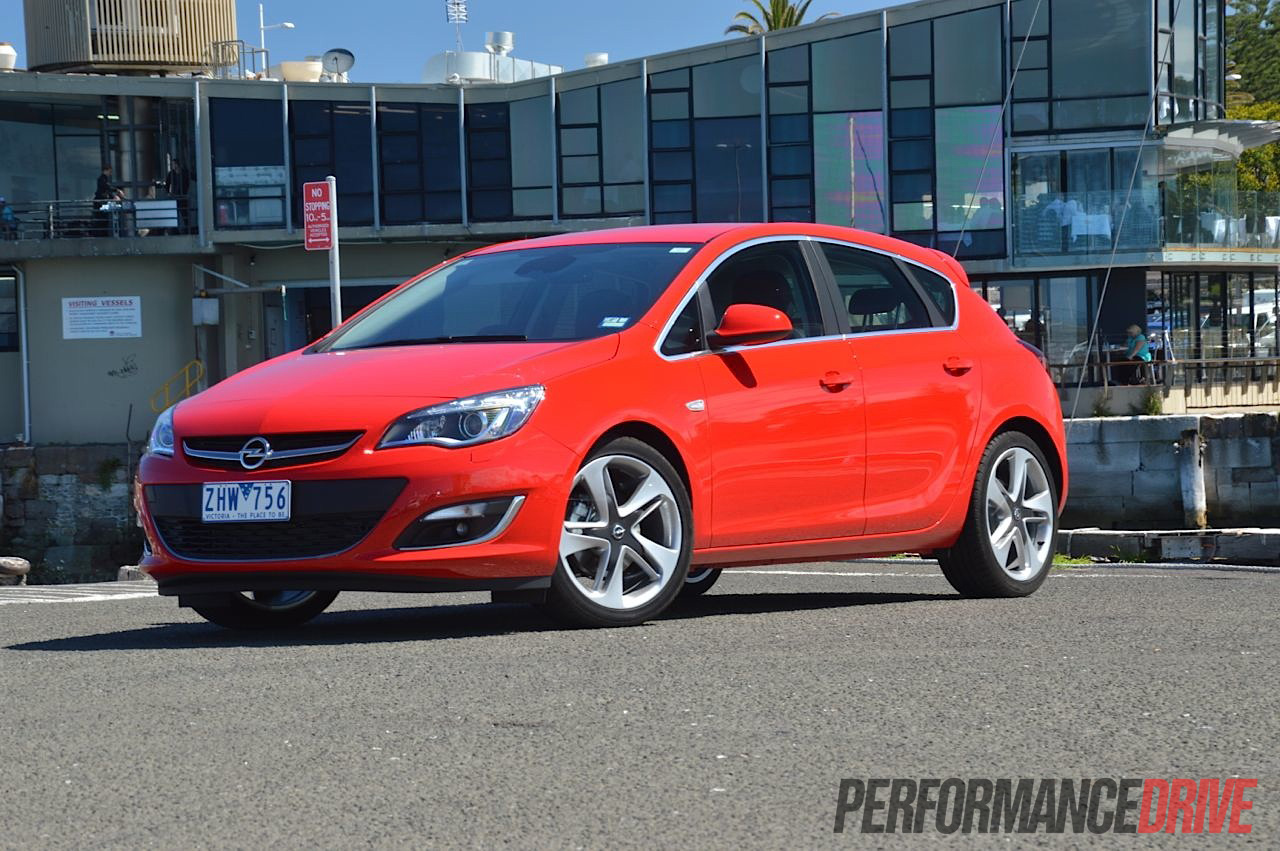 It’s sexy, practical, and zippy thanks to its turbo engine, but is it enough to win over Australian small car buyers? The 2012 Opel Astra Sport is the newest kid on the ever-competitive small car block. Targeting VW Golf buyers, it blends German quality and precision with gorgeous styling, topped off by a fun driving character and a user-focused cabin. 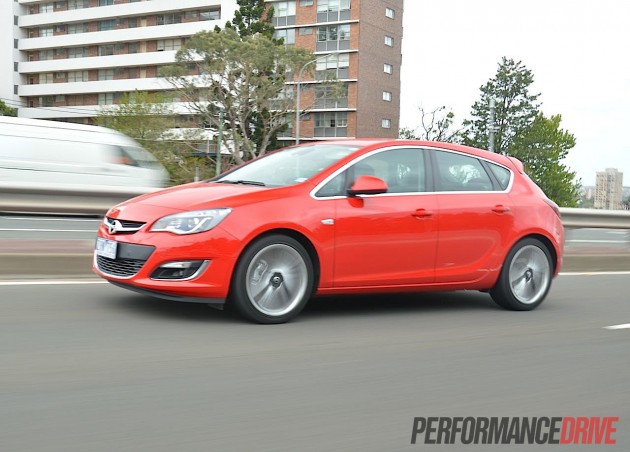 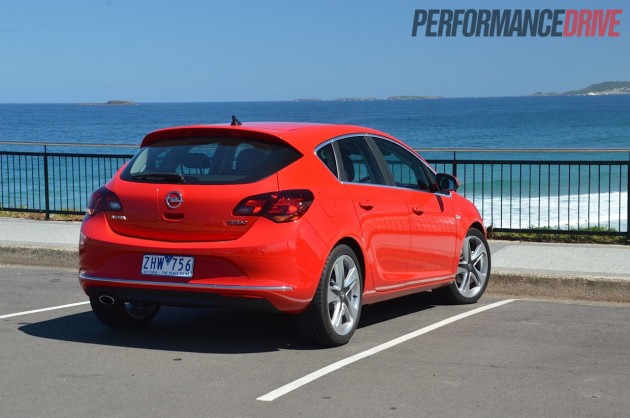 The last time we saw the Astra badge in Australia was in 2009, when it was sold as a Holden. It was one of the most popular vehicles in the increasingly popular small car market.

The Opel Astra is completely different though. It’s an Opel for starters, which is a German brand owned by General Motors. Although their parents are the same, Opel and Holden remain as two individual companies.

This means individual showrooms, and, individual servicing. For some, this will be a problem as there is only around 17 dealerships in Australia at the moment. 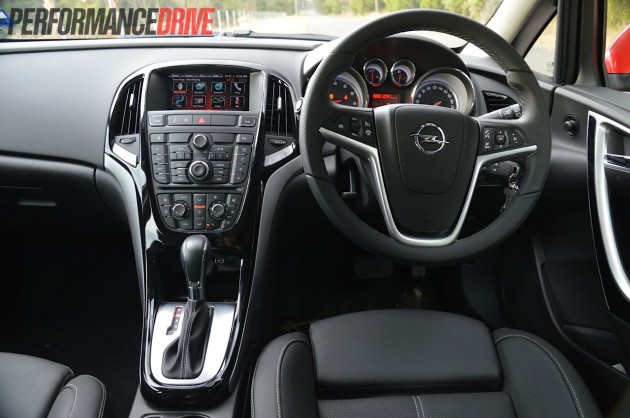 Under the bonnet, the Sport is powered by the same 1.6-litre turbocharged four-cylinder engine as seen in the hot new two-door Astra GTC. It produces 132kW of power and 230Nm of torque. The unit can be matched up to either a six-speed manual or six-speed auto (as tested).

The fact that it gets the same engine as the GTC can be seen as a good thing or a bad thing, depending on what direction you’re looking at it from. On one hand it’s great that it gets the most powerful engine tune Opel offers (aside from the upcoming OPC tunes), but on the other hand it reduces the exclusivity of the GTC. For five-door Astra buyers, it’s a win.

Once you get used to the button-filled dash, the Astra Sport is a pleasurable and relaxing place to be. There’s plenty of legroom front and rear, good headroom as well, and great visibility, and the exterior-matching swoopy decor is refreshing for this segment.

Back to the dash though. There are a lot of buttons to get used to on here, especially around the centre where you’ll find main menu functions. At first, the central knob seems like it controls a cursor on the LCD display, however, this is only for volume. Then there’s another four-direction button inside that, which, again, is a little deceiving as it only controls the map views when operating the sat-nav. It requires some study to get used to it all. 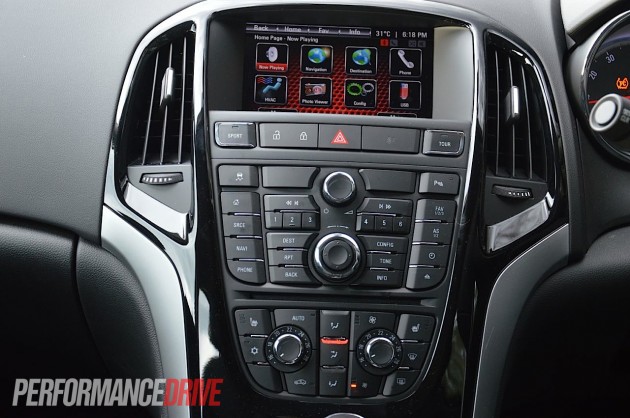 The front seats are sporty bucket-type items with nice little hip bolsters to support fun driving, and they’re heated too. They also feature a handy pull-out leg support cushion, which is sometimes seen on much more up-market vehicles. 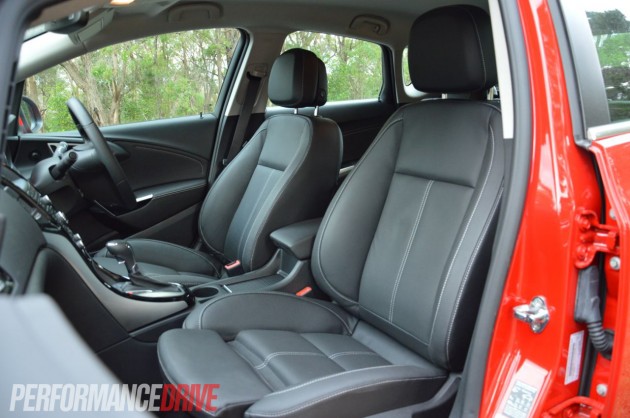 In the back, rear passengers are treated to their own 12-volt power socket (see photo gallery below) and two cup holders, plus two more in the door pockets. The overall space back there is easily on par or above what other vehicles offer in this segment. 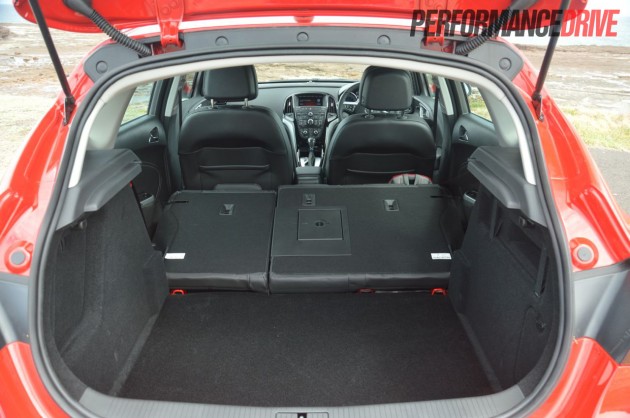 The Astra is designed following the company’s latest curvy styling philosophy, which is showcased on all of its vehicles. It’s a striking and sexy design we think, and one that really stands out in this market segment. You find yourself having a gaze at it every now and then simply for the pleasure of it. The optional 19-inch alloy wheels (as tested) also help out a lot, and will appeal to the younger generations.

From the back, it looks fat, because it is fat. It measures 2013mm wide which is actually wider than a Ford Falcon (1868mm), and around 250mm wider than a Corolla. Most of the width is in the hips, while the front is 1814mm. This presents a distinct wedge shape, perfect for aerodynamic efficiency and cutting through the air. It also gives you an idea of how much focus went into creating an inviting and accommodating interior. 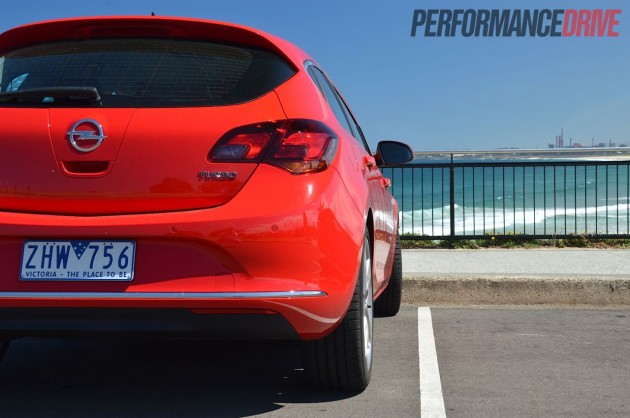 Being a brand new European vehicle, the Opel Astra Sport is filled with plenty of the latest technologies to keep occupants as safe as possible. Switchable traction and stability control is standard, as are eight airbags, front and rear fog lights, daytime running lights, and voice recognition for various in-car controls. It’s all been crash tested by ANCAP and given five stars.

Despite missing out on the more advanced Hyperstrut front and multilink rear suspension layout as seen on the sporty Astra GTC, the Astra Sport five-door is still very capable when it comes to corners.

It features MacPherson struts at the front and a Watt’s link arrangement at the back. It’s all made more versatile thanks to the optional ($2000) FlexRide adaptive settings, with Sport and Tour modes available at the touch of a button.

Turn in is sharp at all speeds (in normal mode), yet the suspension is supple enough to soak up undulations in the road. It’s a superb compromise; the ride is comfortable and forgiving over bumpers, however, there is very little body roll and it’s still eager enough to lean into the bends. We think Opel has done an excellent job on the suspension, a true standout, it’s even ready for Australian conditions. 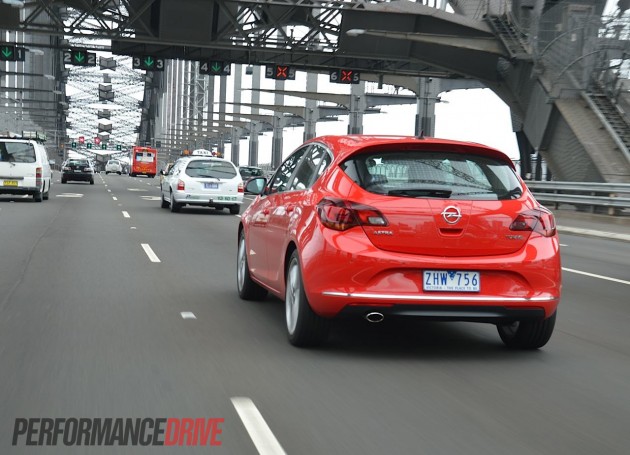 Hit the Sport button and the throttle sensitivity is turned up a notch, as is the suspension. The ride may become a tad firmer but it doesn’t ruin that superb ride comfort – we were happy to leave it in Sport for a majority of our drive, put it that way.

In terms of handling performance, the Opel Astra Sport is easily one of the most enjoyable in this relatively sedate market segment. While some Japanese rivals are a bit unrefined, and the Golf is sometimes too mature and too formal, the Opel dials up an engaging yet capable character. It has a cheap and cheerful feel while also being solid and secure in a German kind of way.

Engine performance won’t snap your neck, but the turbocharger really helps to lug a full car load up and over long highway hills and mountain roads; an area where some of the rivals can perhaps feel sluggish and underpowered.

There’s plenty of power on tap – 132kW – however, we feel some more torque wouldn’t go astray. Up to 230Nm isn’t really all that much, especially considering most of the naturally aspirated Japanese rivals offer similar outputs. It’s the power here that takes command.

We timed 0-100km/h in 9.0 seconds. This means it’s quite a lot slower than the more sporty, more focused rivals, such as the Golf GTI and Focus ST, however, it is a touch quicker than most of the automatic Japanese rivals.

Sitting in the market at around $35k, it’s hard to come to a conclusive evaluation. The Astra Sport almost creates another sub-segment. The Focus ST and Golf GTI are outright hot hatches, while cars like the Corolla Levin ZR are simply garnished with some sporty details. The Astra Sport feels like it sits perfectly in between those two genres. 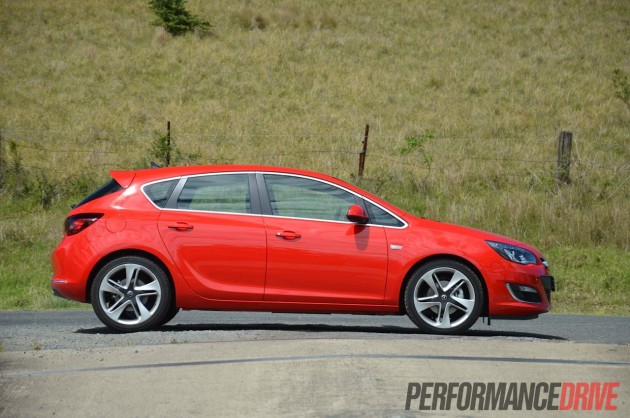 We’re quite confident in saying the Opel Astra Sport is one of the very best and most well engineered hatches in this segment. It’s fresh. It’s practical. It’s powerful enough. And it comes into the market at a reasonable price, especially for a German semi-prestige vehicle. The only potential problem we see is that Opel badge on the front. Most Australians don’t recognise the brand and it will be hard for Opel to lure in new fans.

The other drawback of course is all Opels need to be serviced by an Opel-certified workshop/dealer – not Holden. On the contrary, Opel says it has gone extra lengths to ensure servicing costs remain very competitive when compared with some of the popular rivals.

We feel all of these potential issues could have been completely eradicated if the company simply paired up with Holden on this one, like it did for all of the previous Astra models. Like we said though, as a physical product, a vehicle, it’s a brilliant little runner. 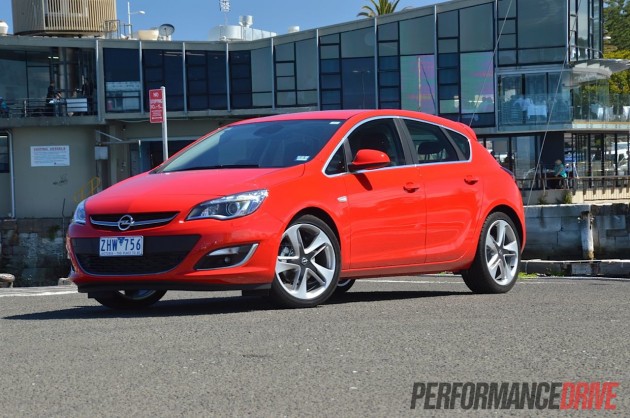