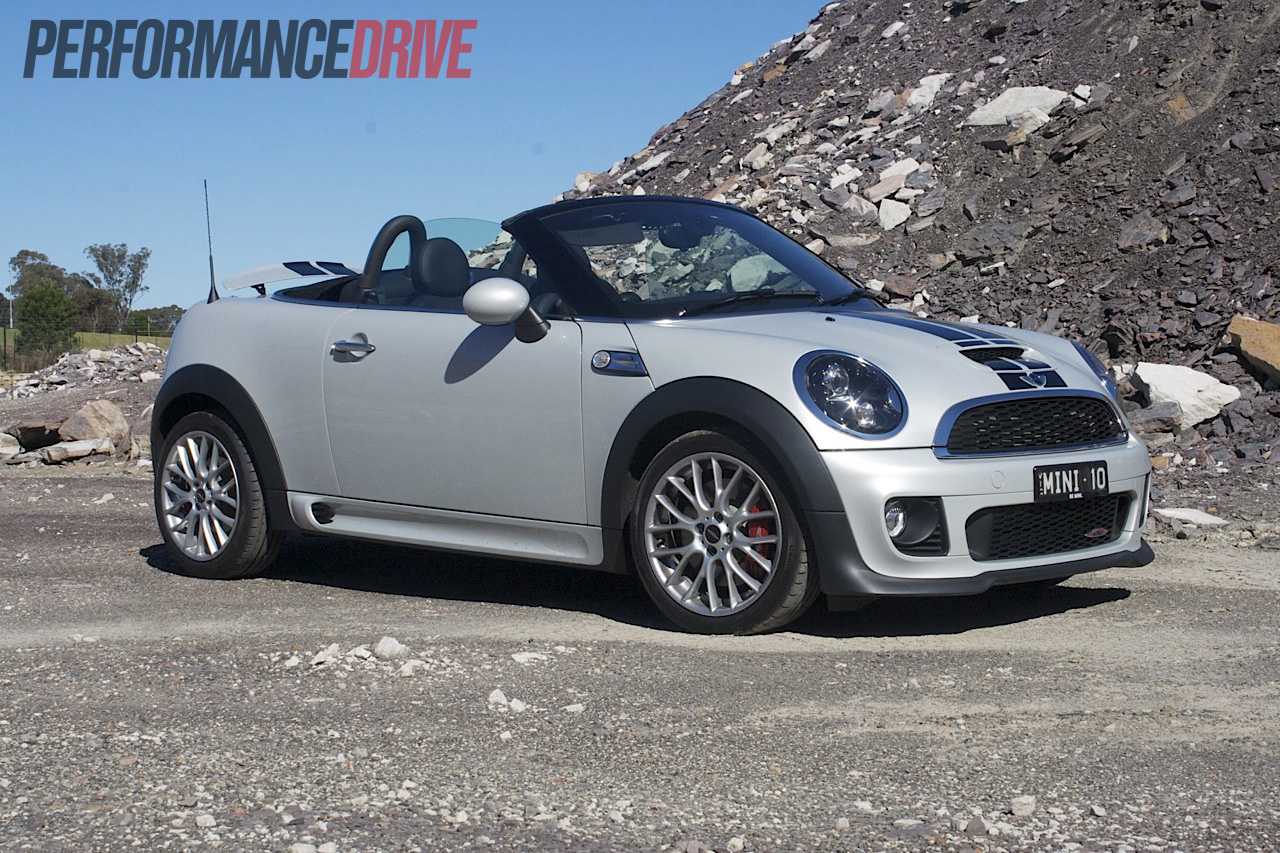 If you’re after a compact, stylish and very quick convertible, the 2012 MINI John Cooper Works Roadster (JCW) is your perfect car. Its extremely punchy JCW-tuned turbo engine provides proper adrenalin-inducing thrills, while the suspension, brakes and interior are spruced up to match. 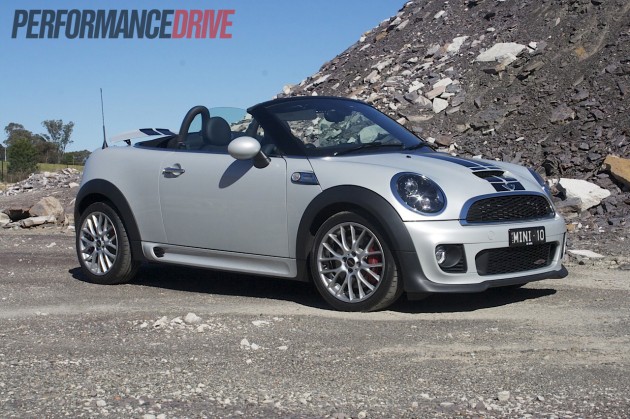 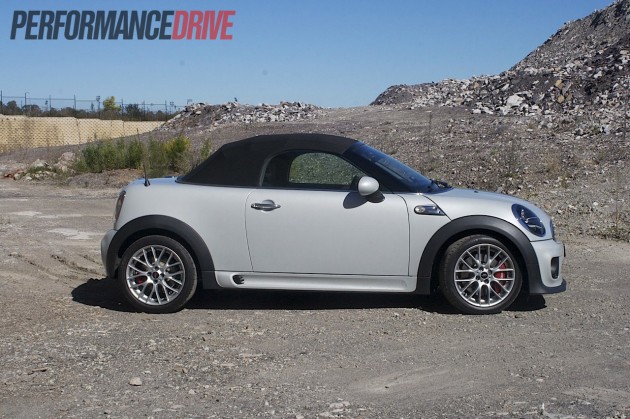 The JCW Roadster is MINI’s quickest and most agile convertible it has ever made. The JCW pack brings high levels of performance in almost every area, with distinguishing features such as a sporty bodykit and black highlights, racer vents and intakes scattered around the exterior, and a set of mesh-style 17-inch alloy wheels to top it all off.

Power comes from a boosted version of the PSA/MINI 1.6-litre turbocharged four-cylinder engine, producing 155kW of power and up to 280Nm of torque during overboost (full throttle) – up from the normal Cooper S rating of 135kW. It’s only available with a six-speed manual, with power going to the front wheels.

Prices start at $55,100, making it one of the most expensive light cars on the market. 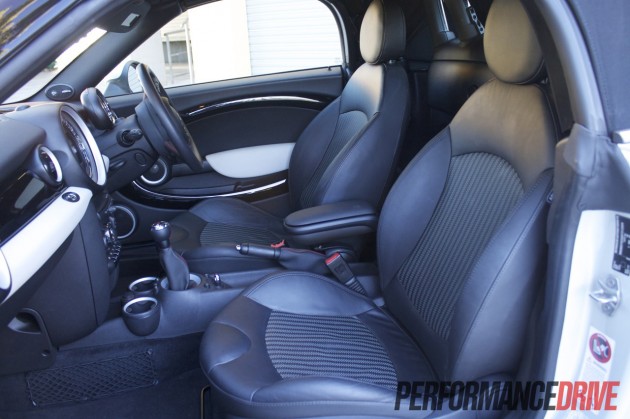 Judging purely by the cute and petite exterior proportions, you might think the interior is cramped. This is not really the case for average-size people. It’s a strict two-seater, sure, but if you’re driving with the roof down… and let’s face it, if you’ve just bought a roadster and you live in Australia, why wouldn’t you have the roof down most of the time… you aren’t really faced with feelings of claustrophobia inside.

Being the top-line drop-top MINI, the JCW Roadster comes with pretty much all the fruit on offer. Inside shows off sporty leather seats, special JCW sill plates and a unique badge on the glove box lid to remind you of the JCW pedigree.

Underneath, the JCW package comes with Sports suspension, electric steering, a beefed up braking setup, and a cracking dual-outlet exhaust system giving off a rally-car-like bark. 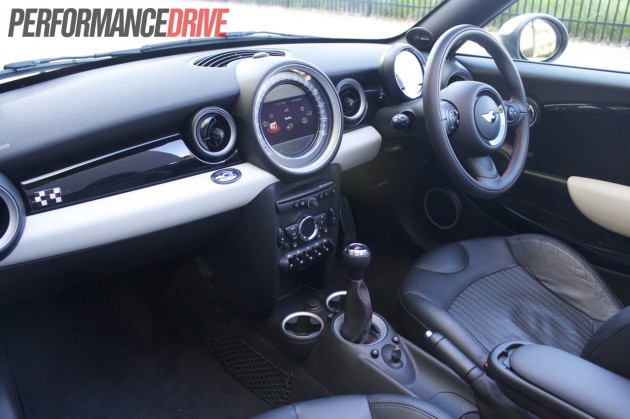 Sitting in the centre dash fascia is MINI’s multimedia interface. The interface is a little bit fidgety at first, but once you get used to the mouse-like toggle near the handbrake, all of the menu options and functions become second-nature.

The interface hardware is borrowed from BMW, with everything from vehicle settings to the very good Harmon Kardon stereo, to the optional satellite navigation ($1150), all entwined in the same unit. All functions are selectable from a ‘home’ main menu screen available at the touch of a separate button. 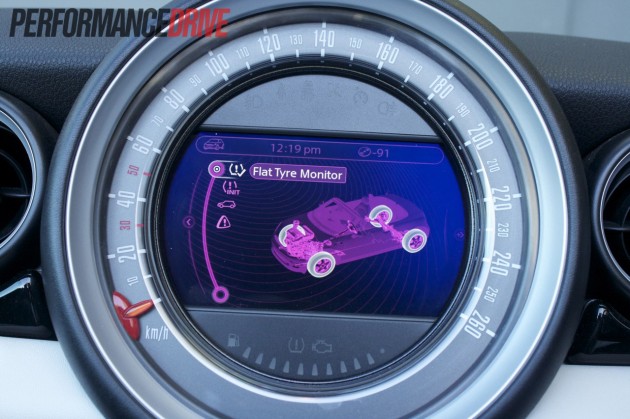 The vehicle settings menu, also from BMW, allows you to keep track of your trip info as well as keep an eye on tyre pressures and the vehicle check control and status systems. If any errors occur with the car, even small things such as a brake light bulb going out, the check system status will let you know.

In the back you won’t find a huge amount of storage space, as you might have guessed. Behind the seats is a reasonably sized parcel shelf which could be used to stow your gym bag or some light shopping. There is a convenient poke-through hole which accesses the boot, so anything you do store in the boot can also be accessible to the passenger while on the go; you can reach in to around the halfway point of the boot floor. 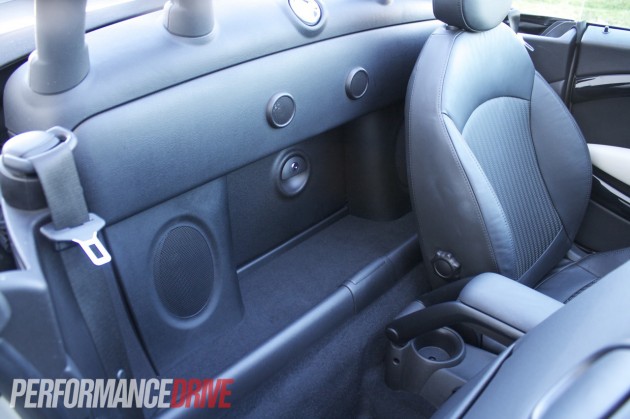 Speaking of the boot, it’s larger than the normal Cooper boot since it does not have rear seats. It offers 240 litres of space over the Cooper’s 160 litres, which is also a lot more than the Cooper Cabrio which offers just 125 litres.

Where the normal Cooper wins in this area is when you fold down the rear seats, opening up 680 litres of space. With no rear seats, the Roadster is obviously unable to achieve this.

The rag-top fabric roof doesn’t intrude on boot space all that much, as it simply folds down manually behind the seats. There is a deduction of 40 litres over the hardtop MINI Coupe version. 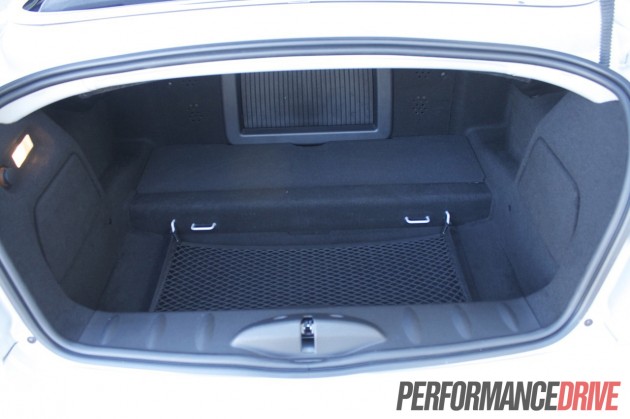 Like the new MINI Coupe, the Roadster is built on MINI’s new ‘three-box’ design platform. This comprises of three separate ‘boxes’ which make up the Roadster’s skeleton, including an engine compartment, the cabin, and the boot section.

With the clever design the Roadster is actually longer than the Cooper Cabrio, measuring 3758mm in length compared with 3699mm of the Cabrio. The width of 1683mm remains the same.

With top down the chrome rollover bars are exposed, giving off a sporty racer appearance. Match this with the electrically deployable rear spoiler, and you have yourself quite a striking little sports car. We think the Roadster looks best in this configuration, as it really stands out in a crowd of humdrum traffic. 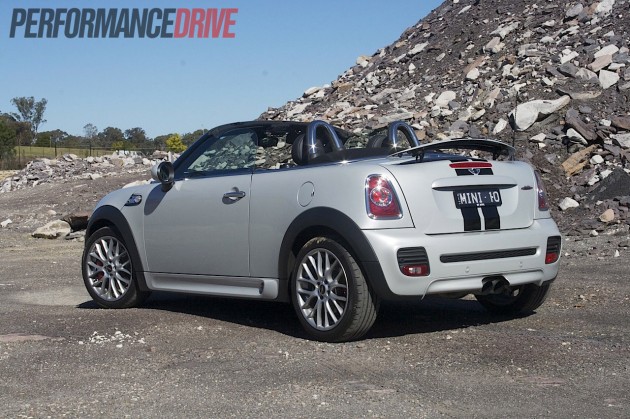 As for safety, Australia’s ANCAP is yet to test the Roadster. It has tested the normal Cooper and given it the full five stars. The Roadster is also yet to be tested by Europe’s similar NCAP safety program. The pocket rocket does come with all the safety features you’d expect on a premium vehicle though, including switchable traction and stability control, four airbags, runflat tyres with flat indicator, and rear parking distance control.

The JCW Roadster could be described as a remote control car being that it’s small and extremely agile. It’s capable of changing directions and poking into corners with lots of enthusiasm, while the engine power is more than enough to overwhelm front tyre grip. If you take off with even slight aggression, the traction control will kick in instantly. If you have it switched off, the fronts will spin through all of first gear quite easily.

There is definitely some torque steer felt through the steering wheel under full throttle as 155kW pulls and wrenches you along with very impressive acceleration. It’s not really a bad thing though. Let us try to explain. Sometimes engineering out these imperfections actually takes away the human-machine interaction. With the JCW Roadster, you always feel you’re in control of the car and you are taking it for a drive, rather than it taking you for a drive. It’s a stimulating and rewarding experience. 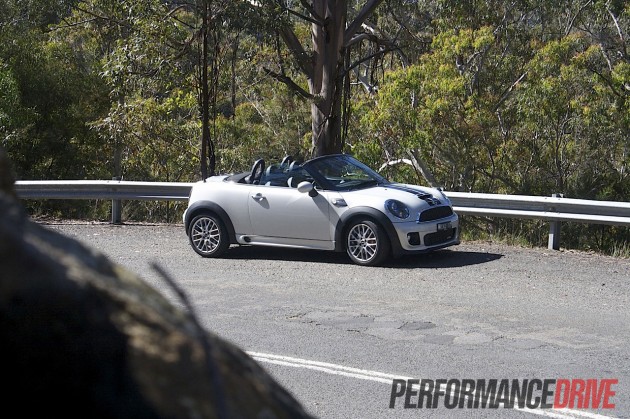 On that note, the handling is darty and direct. It’s simply a matter of pointing and it will follow. There is some understeer if you back off on the power at the wrong time, but if you gently feed in the torque from the apex, the Roadster tracks well and pulls you around and out of corners with serious vigor.

The drawback of this focused handling is the ride can be a little too firm for some city driving. There is an adjustable driving mode, with a ‘Sport’ button, however, it only adjusts the throttle response and steering feel; it doesn’t provide a sport/comfort suspension setting.

We timed a 0-100km/h time of 6.4 seconds. The time is quick but the figure doesn’t really do the actual feeling behind the wheel justice. It feels very rapid from inside the cabin, especially with the top down.

The first time you give it the beans in open-top mode we can bet you will experience goosebumps down your spine. The rumbling, cracking and barking exhaust sounds, along with the turbo whistle and burst, heightens the euphoria well beyond what is experienced in normal road cars. It feels intoxicating. 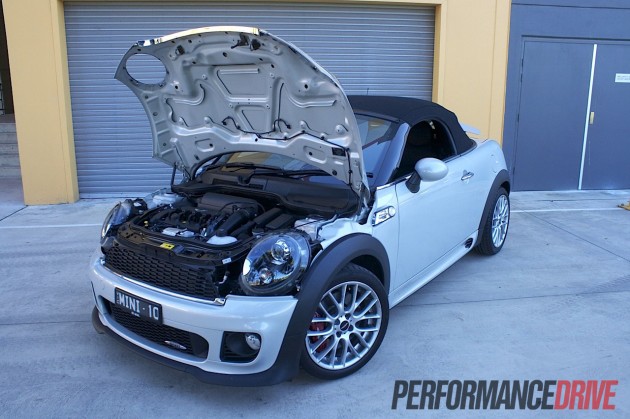 It may not be the most practical car around but the JCW Roadster is a load of fun; it’s certainly not a car that you will become bored with too soon, put it that way. It cracks and pops and sends off all the right noises. It’s also very quick and capable thanks to the JCW engineering, and it could potentially be taken to the track for the odd stint. The fact that it is mostly engineered by BMW provides further reassurance that this is a properly sort vehicle.

This is a special car, and if you’re in the market for something a little special and a little different from the norm, take one for a test drive and see for yourself. We’re sure it will put a smile on your face.

The only aspect that lets it down for us is the sometimes too-hyperactive driving character; it does hamper its grand touring ability. The interior creaks and rattles excessively as well, mostly from around the parcel shelf and subframe area behind the seats which is almost entirely covered in hard plastic. Other than that, it’s a cracking car that could easily put something like a Mazda MX-5 to shame. 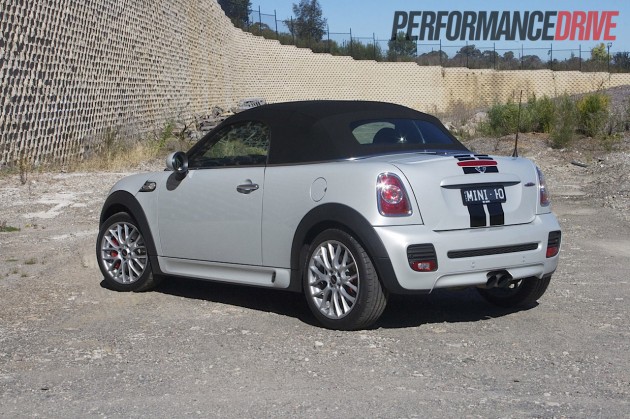