Jaguar has pulled the wraps off the spanking new 2012 Jaguar XKR-S Convertible just ahead of its 2011 Los Angeles Auto Show debut. This is the highest performance Jaguar convertible ever made. 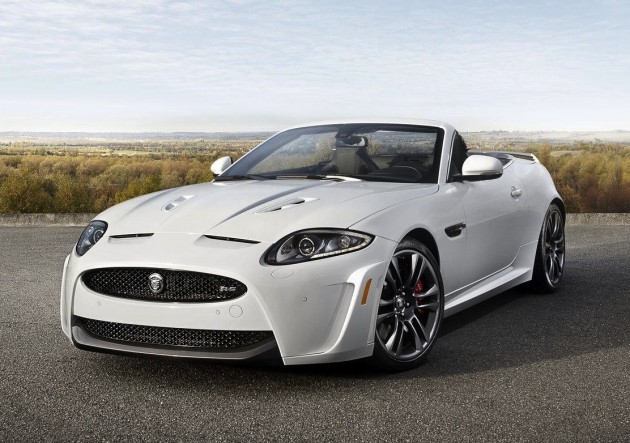 Coming equipped with a 5.0-litre supercharged V8 producing a neck-wrenching 405kW of power and 680Nm of torque, the new 2012 Jaguar XKR-S Convertible is also the most powerful Jaguar drop-top ever made. It’ll do 0-100km/h in just 4.4 seconds and go on to a top speed of 300km/h.

Like the hard-hitting XKR-S Coupe version which was released earlier this year, the new convertible features a very strict track-focused attitude. There’s an aggressive bodykit with extensions and flares front and rear, spoilers, a chunky rear diffuser, and even a set of front corner side winglets.

Inside, there’s a decent smattering of like-minded features such as hip-hugging sports seats, and splashes of cool stainless steel finished highlights. There’s also all the kit you’d expect in a top-end Jag, such as satellite navigation using Jaguar’s media interface, and carbon leather throughout. The fabric roof can also be lowered and raised in 18 seconds at the touch of a button.

As for the performance components, there’s heavily uprated 380mm disc brakes up front with 376mm discs on the back, clamped by coloured aluminium calipers. The fierce feline also gets double wishbone sports tuned front suspension with an active differential at the rear.

Jaguar Australia has confirmed the new 2012 Jaguar XKR-S Convertible will go on sale Down Under in around March 2012. Pricing details are yet to be sorted. Expect a price tag of around $350,000.

There’s no denying this is one magnificent looking machine. Brilliant work Jag.