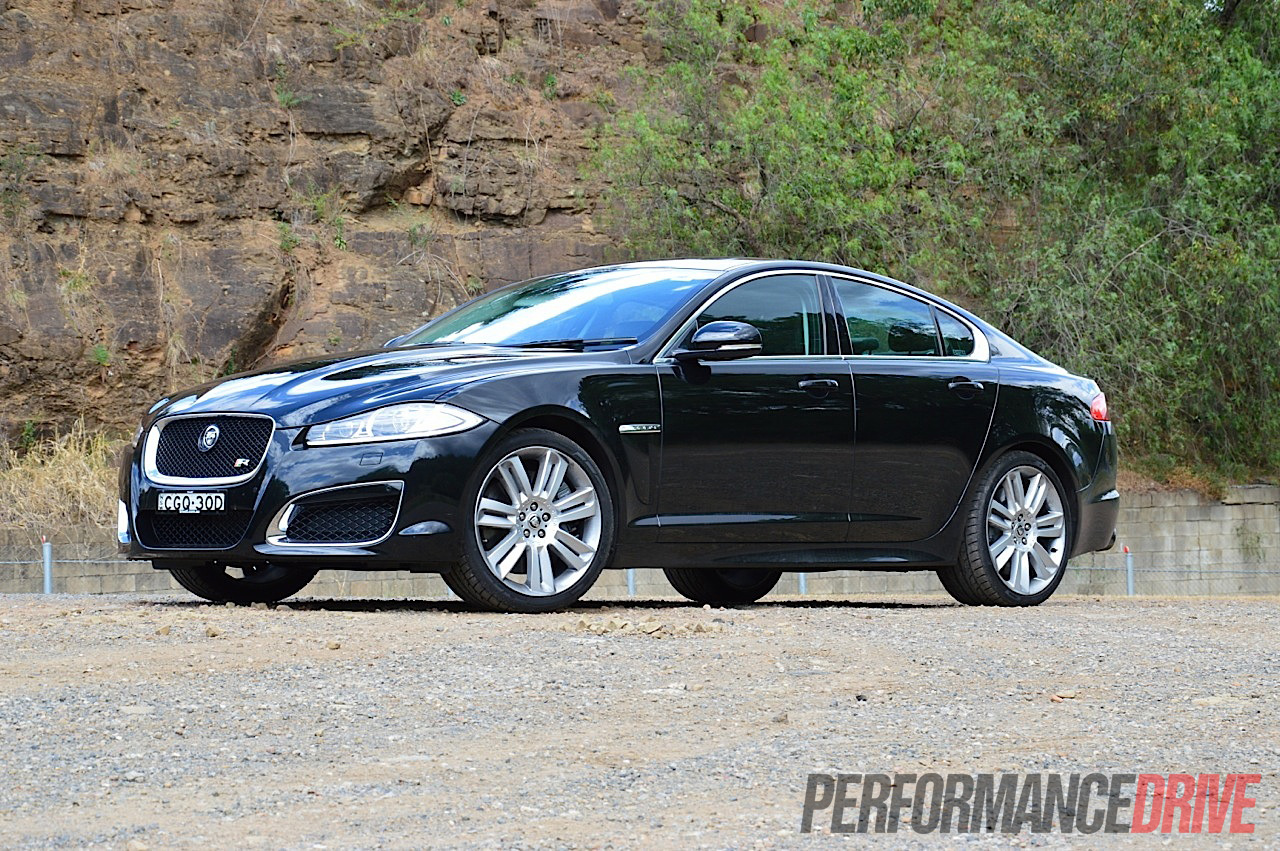 Let us introduce you to the 2012 Jaguar XFR. Like James Bond, the XFR looks rich and intelligent on the outside, but underneath, it has more than a few tricks up its sleeve which turn it into a mischievous and flamboyant lethal weapon. 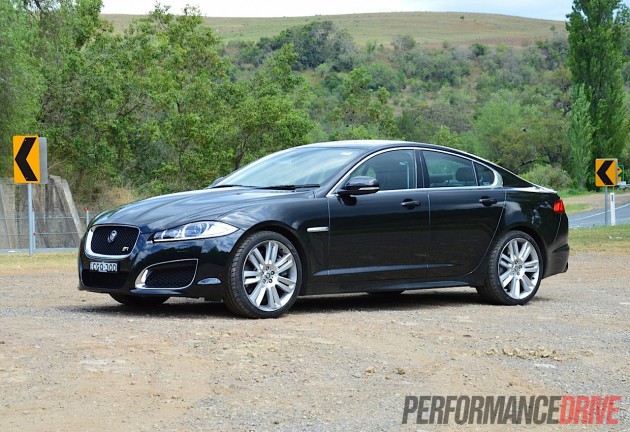 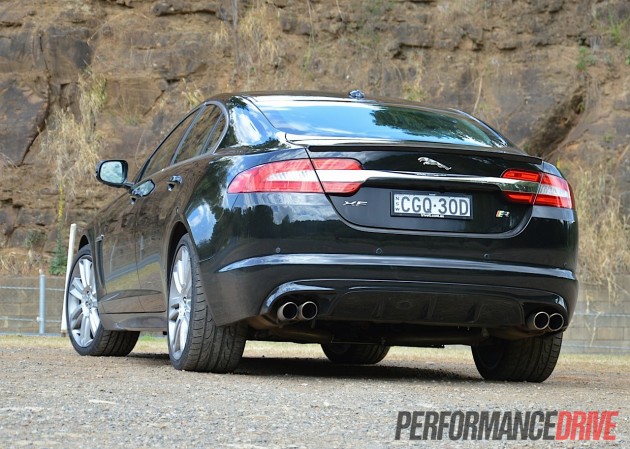 This is the highest performance Jaguar sedan currently on the market, at least until the XFR-S arrives. It follows in the footsteps of the rivals that started this whole genre of vehicle in the first place. A genre that is; a sharp-dressed sedan with comfort and luxury in high doses, with epic performance under the skin. A ‘sleeper’ in some senses.

The two leaders in this category are of course the BMW M5 – the vehicle that started it all – and the Mercedes-Benz E 63 AMG (previously E 55 AMG).

Like the rivals, the Jag XFR comes with a highly powerful V8 monster under the bonnet. Specifically, a 5.0-litre supercharged V8 producing 375kW and 625Nm. It’s matched up to a six-speed sports automatic transmission, feeding power to the rear wheels via an active rear differential.

The engine is smooth yet savage, and can get very angry if you really put your foot into it. Although it might be down on power compared with the rivals, it’s still one of the quickest and fastest production sedans currently on the market. 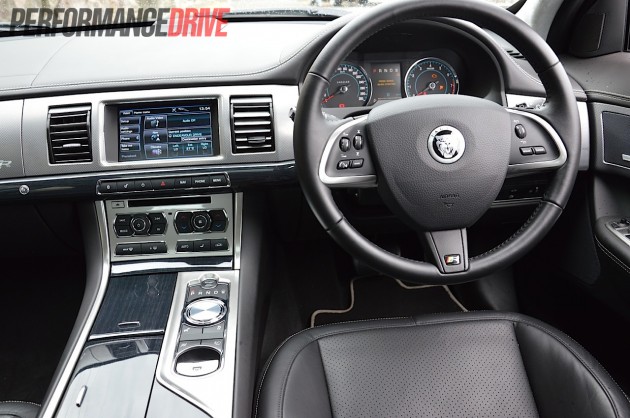 Like all modern Jaguars, the interior isn’t trying to overwhelm you with an incomprehensible assortment of gadgets and gizmos, and techno functions that require 30 minutes of study to understand. Instead, it focuses on pure elegance and quality.

The XFR shares the same multimedia LCD touch-screen interface with the rest of the XF range. Everything from the satellite navigation, the climate settings, to the audio controls can be adjusted through the screen. The climate provides very cool air if required, while the front seats can also be cooled or heated via the perforated leather. 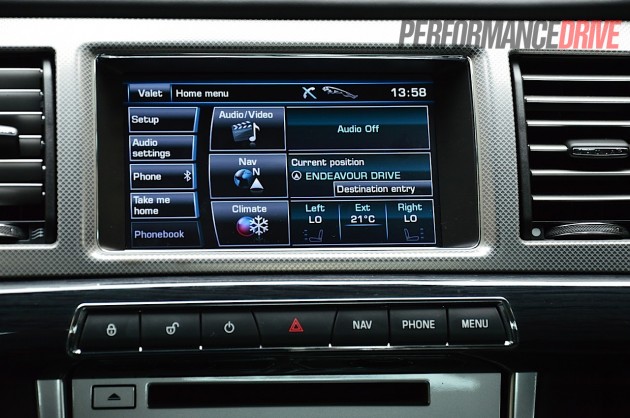 There are a few items, in terms of buttons and settings, that are exclusive to the XFR. If you look down near the chrome rotary gear selector you’ll find a button for the traction control, a button for snow conditions, and an intriguing button that simply has a chequered flag on it.

This engages the ‘Dynamic Mode’, which firms up the suspension and changes the transmission’s brain to provide quicker gear changes. It also holds onto gears longer when you’re not using the paddle shifters. 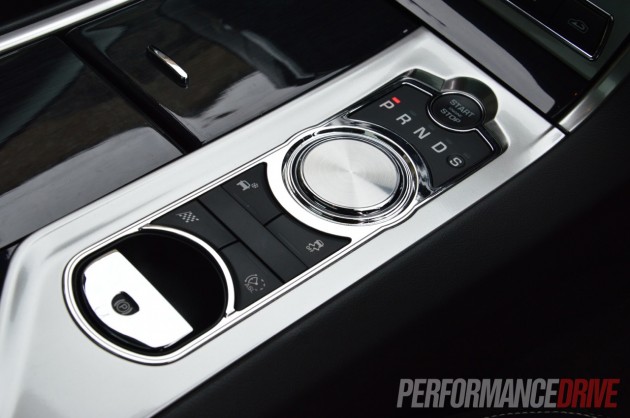 The other main highlight that separates the ‘R’ from the rest of the range are the seats. These are hip-hugging sports items with adjustable side bolsters for the driver. They offer brilliant comfort and support, even when you’re tackling the most indefatigable of bends.

Rear seats are also highly supportive, but at the same time there’s still plenty of legroom and shoulder space, in traditional Jaguar form. All seats feature the ‘R’ emblem etched on the upper sections for that extra touch. 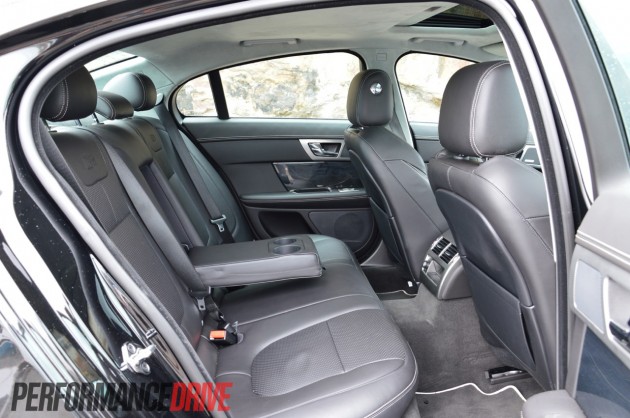 The XFR looks very impressive and imposing on the street. While it may not be instantly recognisable as an ‘R’ car, the natural good looks of the XF always attracts the attention of onlookers.

It’s sharp, crisp, and somewhat exotic. A pair of modern headlights featuring a sharp swooping string of LEDs gives it a classy and exquisite face, with hints of chrome detailing around the grille and in between the taillights giving it some contrast. 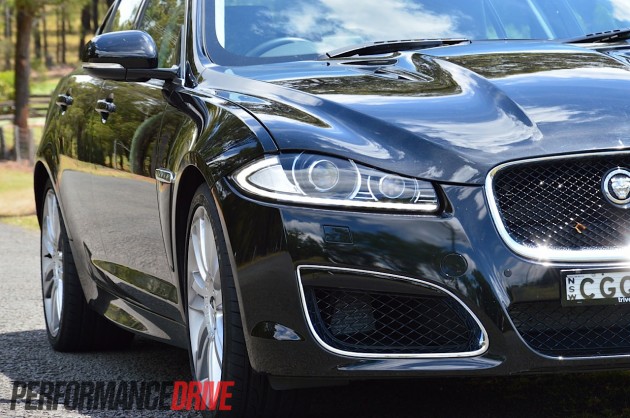 For the XFR, there’s a pair of real bonnet vents with the words ‘supercharged’ jumping out at you as you peer through into the engine bay, a set of side ‘gills’ just behind the front wheels with a chrome panel displaying ‘Jaguar’, a more aggressive front bumper bar with larger side intakes, a black mesh grille, and a sneaky rear spoiler and finned diffuser at the back embracing the quad-outlet stainless steel exhausts. A set of 20-inch, ‘supercharged’-signed alloy wheels top it all off, wearing 255/35 front and huge 285/30 rear tyres.

It’s all about walking that fine line between being a bespoke high performance vehicle, without overstepping the natural luxury character that is Jaguar.

There’s a high level of attention to detail throughout. It’s not until you have a look more deeply into the car’s makeup that you notice things like ‘Jaguar’ intricately engraved into the air vent toggles, the soft ivory ‘Jet Suedecloth’ roof lining ($845 option), and the stainless steel cup holder bottoms. 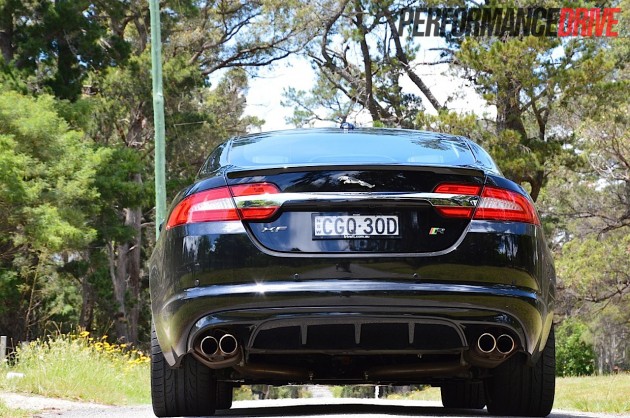 Like the rest of the XF range, the body design was originally created using Computational Fluid Dynamics (CFD). Jaguar engineers focused on managing air flow, keeping wind noise to a minimum, catering for and supporting high-speed stability, and maintaining good aerodynamic efficiency with fuel consumption in mind. The XF body has a coefficient drag of 0.29.

As for safety, Australia’s ANCAP has tested the 2010 model and given it four stars. The complete XF range comes with eight airbags, electronic traction and stability control, brake force distribution to keep the car stable during emergencies, and corner braking control. Europe’s NCAP has also rated the XF four stars. 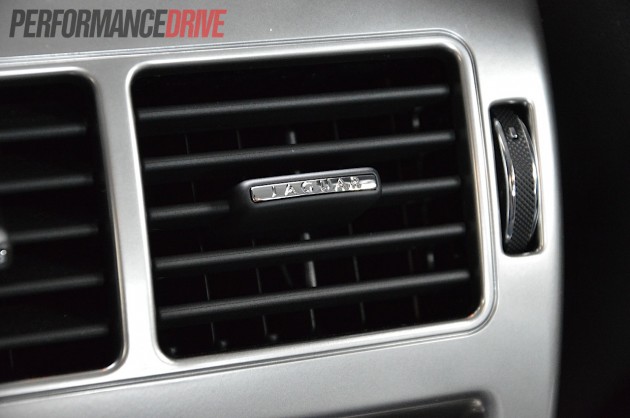 In terms of sheer performance, there’s not many sedans that come close to the XFR. The V8 brings a progressive yet relentless surge of V8 torque followed by grin-inducing top-end power. It’ll rev to 6500rpm too.

While it may not be as playful or as dynamically complete as the M5 or as solid and brutal as the E 63, the XFR offers excellent sure-footed handling and superb high speed stability through long sweepers. With the traction and stability control switched off, achievable only by holding down the button for 10 seconds, the XFR turns into a sweet drift machine. 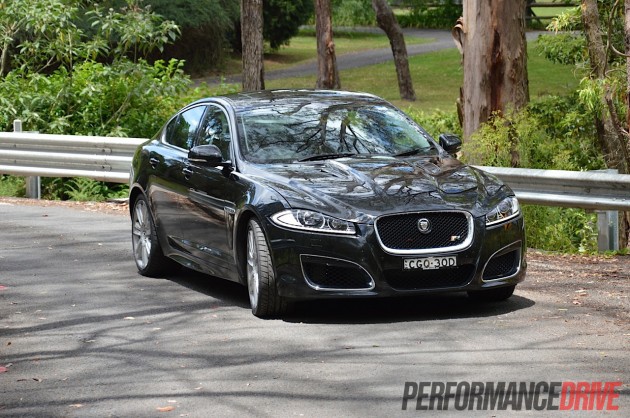 There’s no limited-slip differential at the back, in the old-fashioned mechanical sense, nonetheless, it does come with an electronic active diff which calculates and spreads torque between the two rear wheels according to their traction.

Thankfully, it’s not one of those annoying electronic types that brakes individual wheels, causing cumbersome, and quite frankly, embarrassing body movements. In other words, if you point the nose in and feather in some throttle, a smooth and satisfying drift can be maintained with no trouble at all. If you really put your boot into it, you’ll be slung around in a controlled, smoking powerslide, accompanied by heart-stopping g-forces.

Floor the throttle off the mark – with the traction control off – and you will be greeted with a gear-full of wheelspin. Thanks to the huge 285mm tyres on the rear though, the wheelspin doesn’t mean you’re left in a cloud of your own tyre smoke. The XFR energetically slingshots away, pouncing, like a big cat… 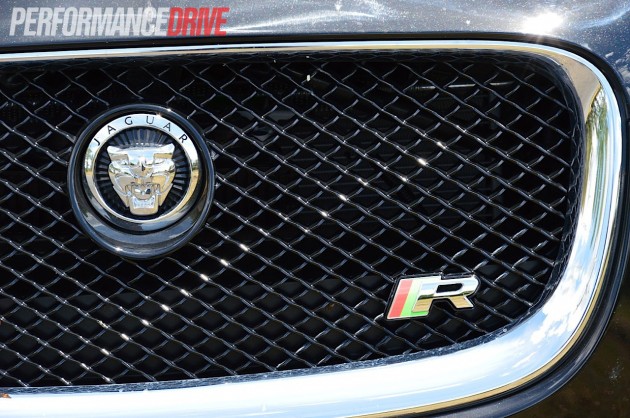 We timed 0-100km/h in 4.4 seconds. It is one the best traffic light racers we’ve driven. The smooth and direct six-speed auto has long legs so you need only touch the throttle to get up to and beyond the speed limit. And because the engine is supercharged, you get loads of low-down torque.

The maximum torque (625Nm) is spread from 2500rpm to 5500rpm, which gives you that ongoing, relentless acceleration through the gears. On a private road, we timed 0-200km/h in just 14 seconds, giving you an idea of how relentless it all is.

The great thing about the XFR is that it’s still quintessentially a Jag, in that, the ride quality and comfort isn’t compromised for the sake of pin-sharp directness, or a bone-jarringly stiff suspension setting. That’s not to say the XFR is a wallowy boat, because it’s not, it simply measures up that fine ratio of road comfort and handling prowess.

With the Dynamic Mode engaged, the suspension is stiffened up and the transmission is made more eager, changing gears more quickly. The paddle shifters work brilliantly with the transmission, blipping the throttle on downshifts just like a sequential/dual-clutch gearbox. 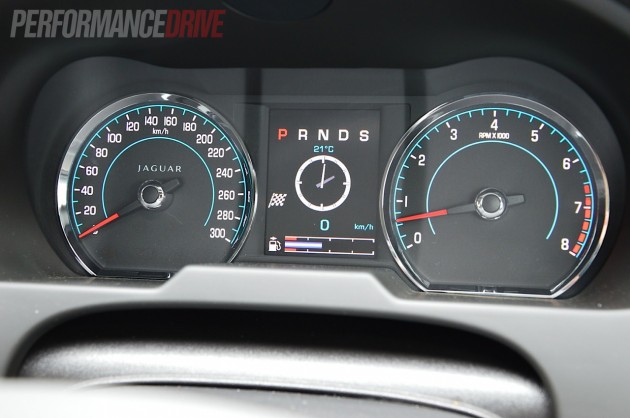 Sure, if you were only interested in attending track days on a regular basis, and were adamant at achieving the quickest times of the day, then yes, there are better options. But if you want a car that can scare the pants off many enthusiast’s cars at the odd track day, and also take you home at night in soothing comfort, that’s what the XFR is all about.

The sports suspension, which comes with Active Ride control, helps the XFR lean into corners. Even though it weighs 1891kg, it doesn’t feel too heavy or overwhelming. There is some very minor body roll, in comparison to the rivals, but it hardly detracts or disrupts its eagerness to play. If anything, it feels like the body wants to dance, anticipating your next move.

When it comes time to hitting the anchors, the XFR delivers in spades. It comes with 380mm front and 345mm rear brakes with six-piston and four-piston calipers, respectively. We experienced no brake fade or dropping of the pedal during our test. Even under repeated, demanding pressures, the XFR takes it all in its stride. 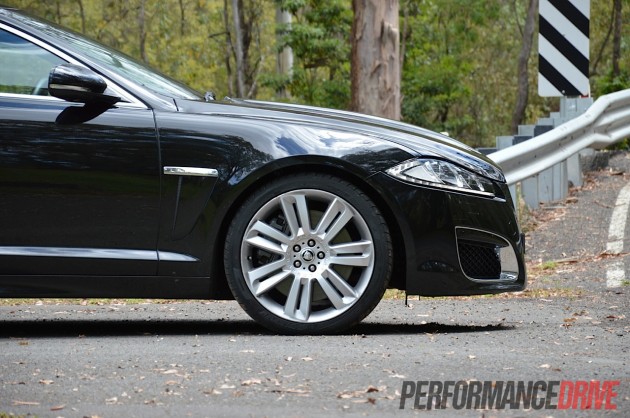 As an all-rounder, the Jaguar XFR is one of the very best. Around town and as a car to live with on a daily basis, there’s so many good points; it’s comfortable, it rides extremely well, the transmission won’t break your back, and the modest bodykit/styling won’t gouge a hole in your driveway. In fact, we struggled to find anything really negative to point out about the XFR, it’s no wonder Autocar in the UK gave it a full five-star rating in its 90-second verdict – one of the only cars ever rated five stars by the publication.

Under the hammer, the XFR can hustle and dance around corners. It’ll also drift at will, and it’s capable of frightening passengers with serious levels of acceleration and performance. Best of all the, we think, the XFR is a cool car. Everybody likes it. It doesn’t seem like there is any snobbery that’s sometimes associated with the key German rivals. Good job, Jag. 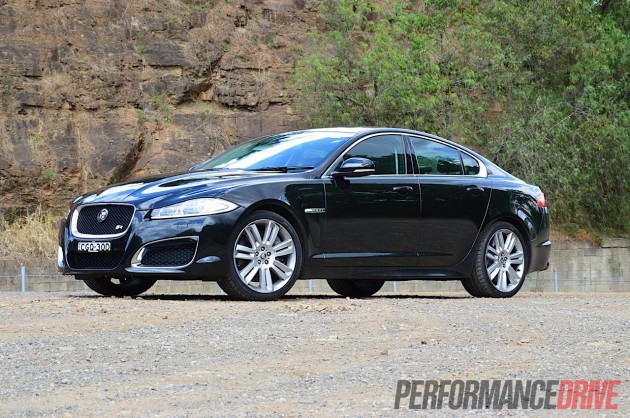