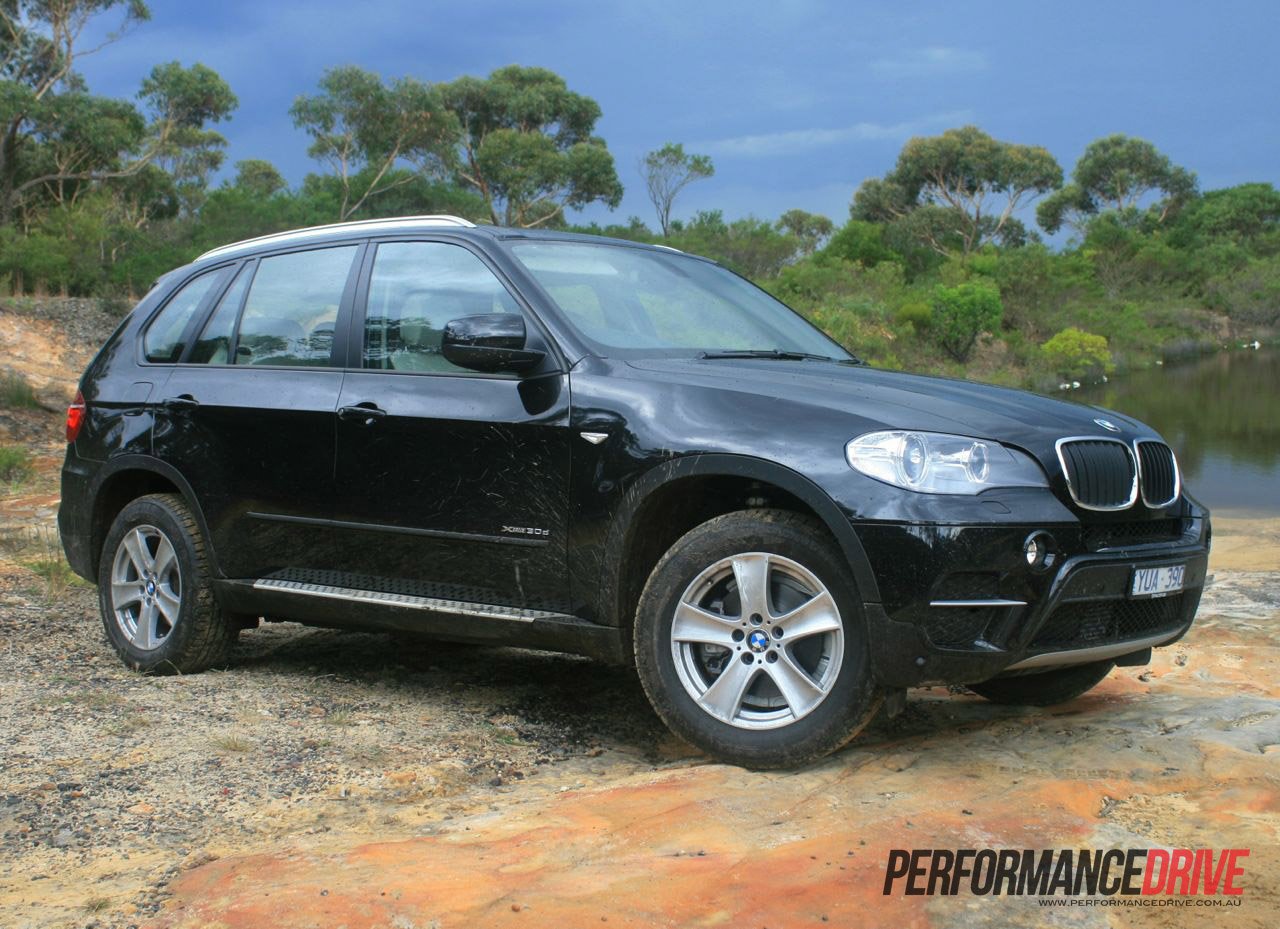 The BMW X5 has been around since 1999. It is regarded as one of the best-handling SUVs money can buy. Does the 2012 BMW X5 xDrive30d still offer that ‘sheer driving pleasure’? 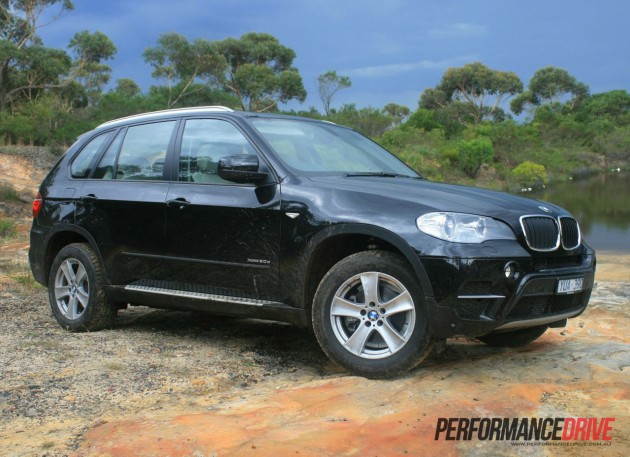 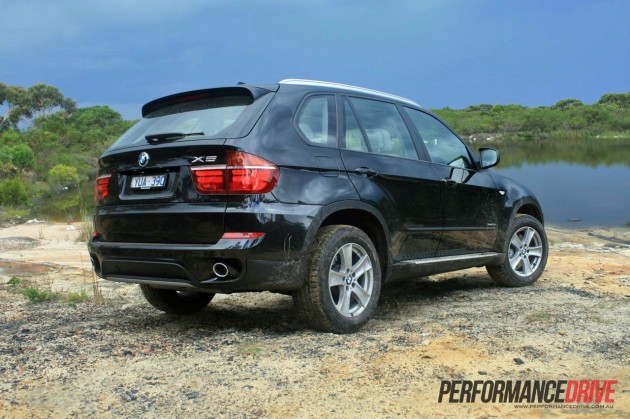 To understand where the X5 fits into the market we have to take a look at its main rivals. According to official VFACTS data, the X5’s closest rivals, in terms of popularity, are the Land Rover Discovery, Range Rover Sport, Mercedes-Benz ML-Class, Volkswagen Touareg, and the Lexus RX. During March, the X5 was the third best-selling SUV in this over $70,000 category, behind the Land Rover, and the Range Rover.

You might notice a bit of a trend with these vehicles. The SUVs aren’t really known as the roughest and toughest of 4x4s, but they manage to blend on-road comfort, luxury and dynamics, with all the presence of that jumped up 4×4 stance.

The 2012 BMW X5 xDrive30d is BMW’s offer of providing the market with a robust yet luxurious off-roader that’s also efficient enough to be used as the daily runaround. It features BMW’s much-loved 3.0-litre TwinPower turbo-diesel straight-six engine, matched to an eight-speed automatic transmission. Power is sent to a full-time all-wheel drive system.

Engine power is rated at an energetic 180kW, while torque surges out to a relentless 540Nm. We timed 0-100km/h in 7.5 seconds, which is not bad considering the X5’s power-to-weight ratio is only slightly better than the power-to-weight of a base model Nissan Tiida. (The torque-to-weight ratio obviously plays a major role here.) 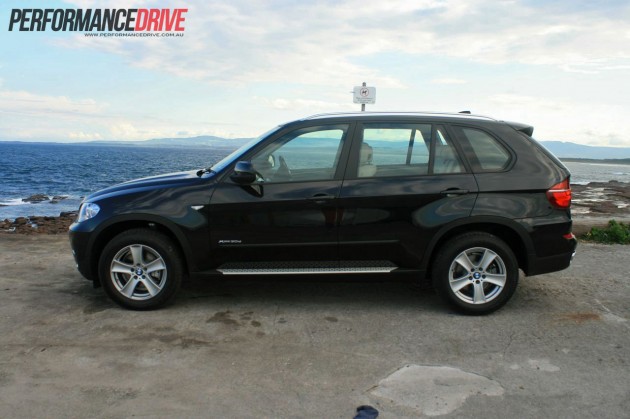 Our test vehicle comes with the Innovations Pack (now standard fitment on all X5s, previously a $9000 option), which includes a long list of interior gadgets and technology. There’s a huge 8.8-inch LCD screen interface, with split-screen options. The screen displays everything from the user-friendly satellite navigation system, to the vast range of adjustable vehicles settings, to the media and stereo system. 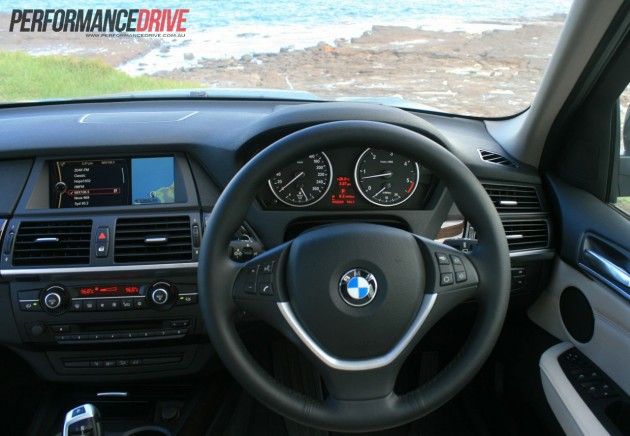 All these systems may sound complicated and overwhelming, however, most of them operate in the background without user input. The auto high-beams, for instance, automatically recognise a vehicle – oncoming or approaching – and dip the beams for you. It then re-engages them when the vehicle is out of proximity. We found the system to work very well, and quite quick in terms of noticing another car and then dipping the beams. 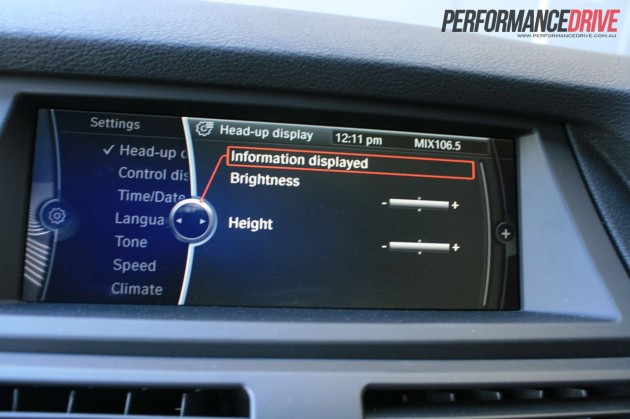 Thanks to the iDrive control on the centre console, there’s lots of functions that can be adjustable too. From the automatic dock locks, to how long you want the lights to stay on after you’ve left the vehicle, it’s simply a matter of navigating through the main menu into the desired section.

Diving into the Vehicle Settings menu, you’ll find adjustments for the headlights, brightness and eye level of the head-up display, and even an option to adjust how high you want the electronic tailgate to rise up – handy if you park in a low garage on a regular basis. 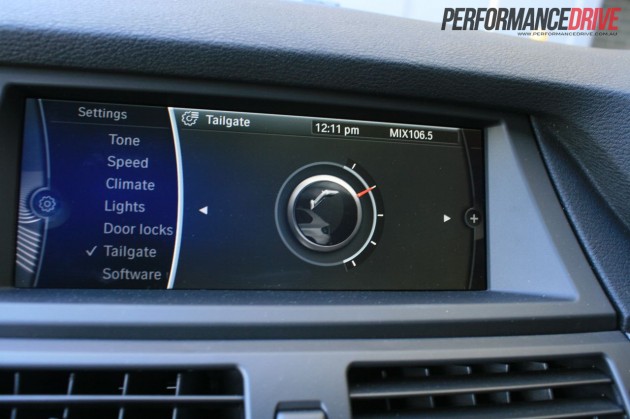 As for comfort, there’s plenty of quality leather throughout the cabin, including wrapped around the very comfortable and electronically adjustable front seats. The rear seats are also lounge-like, and come with loads of head and legroom. There are also adjustable vents in the back.

We found the cargo space to be plentiful, with 620 litres on offer with the rear seats upright, or a massive 1750 litres with the rear seats folded down, however, compared to the Range Rover Sport’s 958 litres, it’s not the biggest boot in the class. The rear seats don’t quite fold completely flat unless pressure is applied. 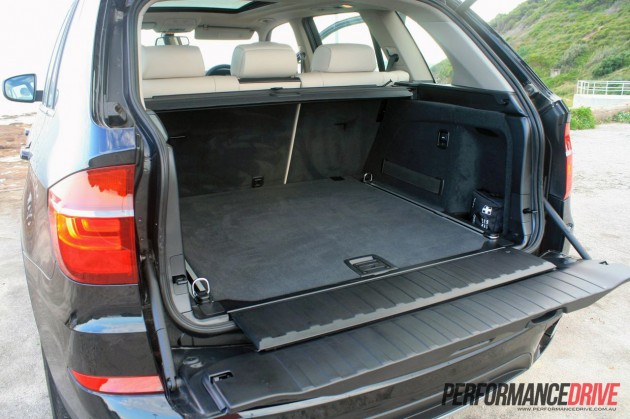 Overall, the interior is a pleasant place to be. For some reason, as soon as you sit in it, you suddenly feel like going on a country-wide road-trip. It feels prestige and luxurious, while the optional huge panoramic glass sunroof lets in plenty of light (if you want it too), providing an airy family room environment. 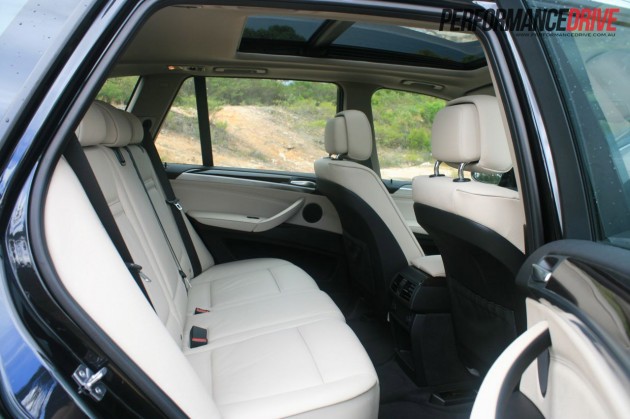 The 2012 BMW X5 features the facelifted design first introduced in 2011. You can see the heritage links in design to the original model X5, however, the latest model showcases BMW’s more recent, flowing design philosophy. 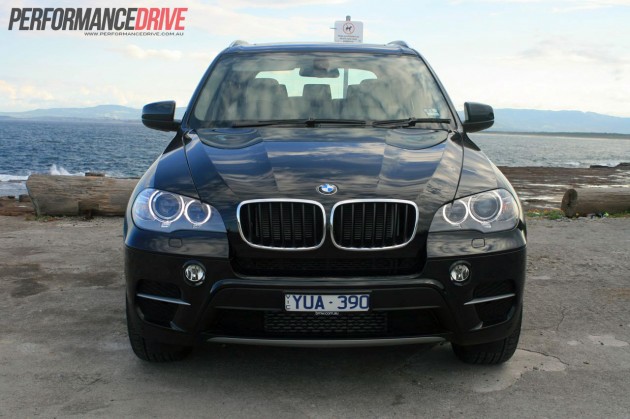 Inside, it’s all about minimal intrusion without taking too much away from the occupants. All controls are in easy-reach, while the iDrive system features a cluster of jump-to options for the front passengers.

In terms of safety, the BMW X5 has been given the full five star rating by ANCAP. It comes with Active Headrests, which help to reduce the chance of whiplash, traction and stability control, Dynamic Brake Lights that flash under heavy braking to warn following motorists, and a host front and rear airbags.

This is where the X5 should really shine. The steering should be like putty in your hands, while the handling should be active, energetic and very capable, with an overall completeness/solidness theme to it. The engine and transmission also needs to work in with these factors to provide that overall great driving experience BMW is renowned for.

It doesn’t matter that this is an SUV, BMW has managed to supply and deliver splendidly in every criteria. The steering is beautiful, it communicates every single thing the front and rear end is doing, back to the driver’s hands.

The only aspect that reminds you that this is an SUV and not a normal 5 Series is the amount of turns lock to lock. There is a touch more compared with the 5 Series. This is not a criticism though, just an observation. 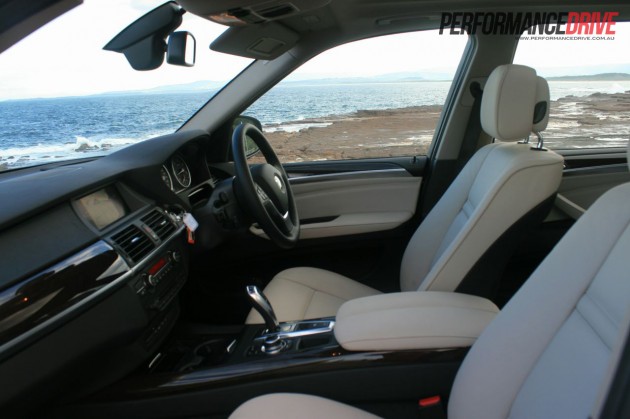 Normally, if you turn into a roundabout a bit too quickly in an SUV, the front tyres will begin to whinge fairly early. Not in the X5. The steering just keeps turning, and the car just keeps rotating. It’s not a sports car, but you can definitely feel that underneath, the X5 was created with sportiness in its genes. It’s brilliant fun to drive.

Jumping from corner to corner along a twisty bit of road is not usually what you call fun in a large SUV. It is in the X5. There’s very minimal body roll, it almost feels as if the chassis is leaning the opposite way to anticipate a corner, countering dramatic shifts in weight. 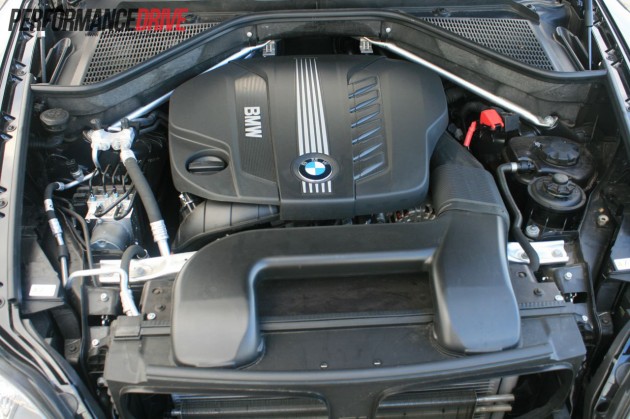 The 3.0-litre engine is a diesel, but this doesn’t mean it’s not up to the sportiness level of the chassis. It provides plenty of low-down oomph. Off the mark, there’s a big shove in your back as the 2013kg outfit is shifted rapidly thanks to the 540Nm of torque.

Matched up to the eight-speed automatic, the engine is very smooth. The intelligence behind the transmission provides a great compromise between fuel efficiency and making best use of the engine’s torque and power.

It does change up gears fairly quickly, with 4th and 5th slotted in at around 50km/h-60km/h, however, if you prod the accelerator a touch, lower gears are seamlessly slotted back into place for decent acceleration and overtaking.

In Sport mode – when you flick the gear lever over to ‘S’ – the transmission holds gears longer, and downchanges itself a lot sooner. It anticipates a more active driving style.

We found that the normal mode does just fine, even if you give it a bit of stick through a nice road. The engine doesn’t need to rev, it will, all the way up to around 5000rpm if you want it to, however, simply allowing it to work through the gears in ‘D’ feels fastest and most comfortable. 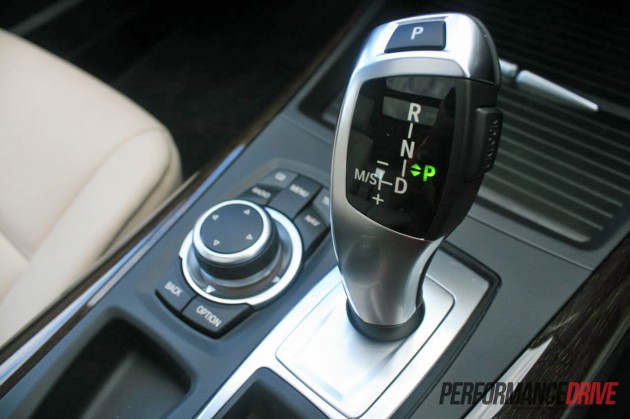 As for the sound of the engine, it’s remarkable how finely tuned companies are getting diesels these days. BMW’s 3.0-litre, like the ’35d’ engine used in other BMWs, is silky smooth. You could easily mistake it for a petrol inline six. At one point in the rev range (around 3400rpm), just for a moment, there’s a slight clatter hinting towards its diesel combustion. But that’s it. The rest of the time it’s quiet and smooth.

We managed to achieve over 800km per a tank. We didn’t let the tank go very low either, and could see this thing hitting 850km-plus quite easily. Our test also involved lots of vigorous and off-road driving. During more common driving conditions, 1000km wouldn’t be out of the question.

Being so prestige and imposing out on the road, the X5 still can cut it when the going gets rough. We didn’t put the car through the toughest of terrains, however, we found the approach angle to be excellent, and the traction to be very good during wet, muddy conditions. Even with sub-sporty Continental 255-wide tyres. 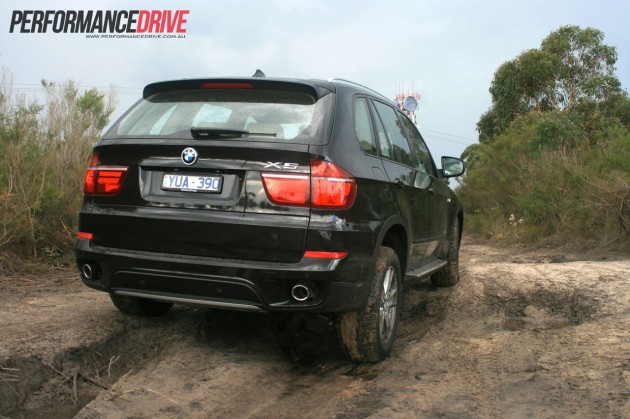 The depart angle can be prone to getting close in some situations, however, the completely flat underbody meant we could clamber over ruts and humps with ease.

If any element suffered off-road, it’s the ground clearance of 170mm. But unless you plan on doing extreme off-roading, the X5 is able to conquer most typical 4×4 conditions. The only other part that’s missing is low range, however, with eight speeds on board, first gear is short. 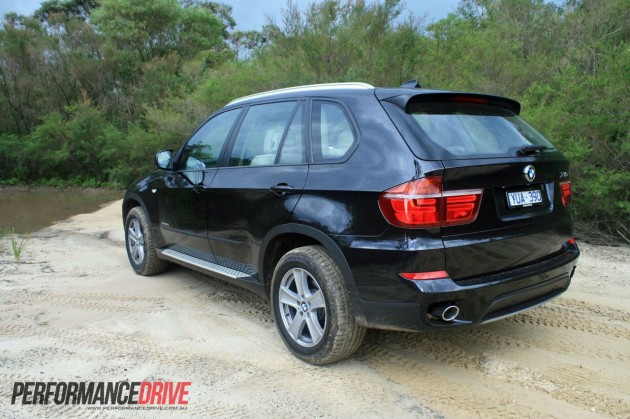 The 2012 BMW X5 xDrive30d is a superb compromise between luxury off-road performance, and excellent on-road performance. It’s also very economical for a large SUV, and it’s filled with technology in true BMW fashion. 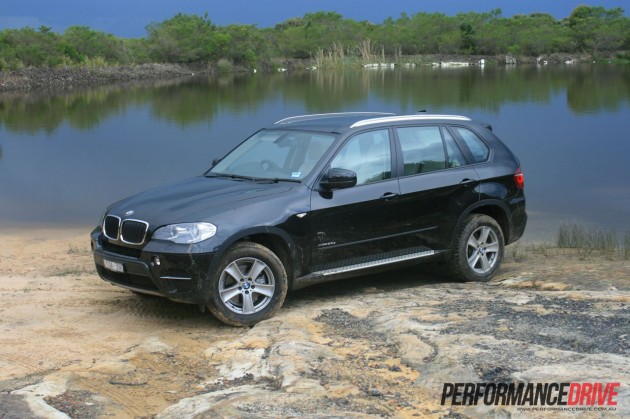 The X5 xDrive30d is actually quite difficult to fault, the only problem is you need to fork out $92K to buy one. The options list is rather extensive too, so that price can easily blow out beyond the $100,000 mark.

Mercedes-Benz ML 250 CDI – 2.1-litre twin-turbo-diesel four-cylinder, 150kW/500Nm – $81,400
Mercedes-Benz has only recently introduced the updated model, with this 250 CDI variant the only version on offer at the moment. It’s significantly cheaper than the Beemer, but slightly down on power and torque.