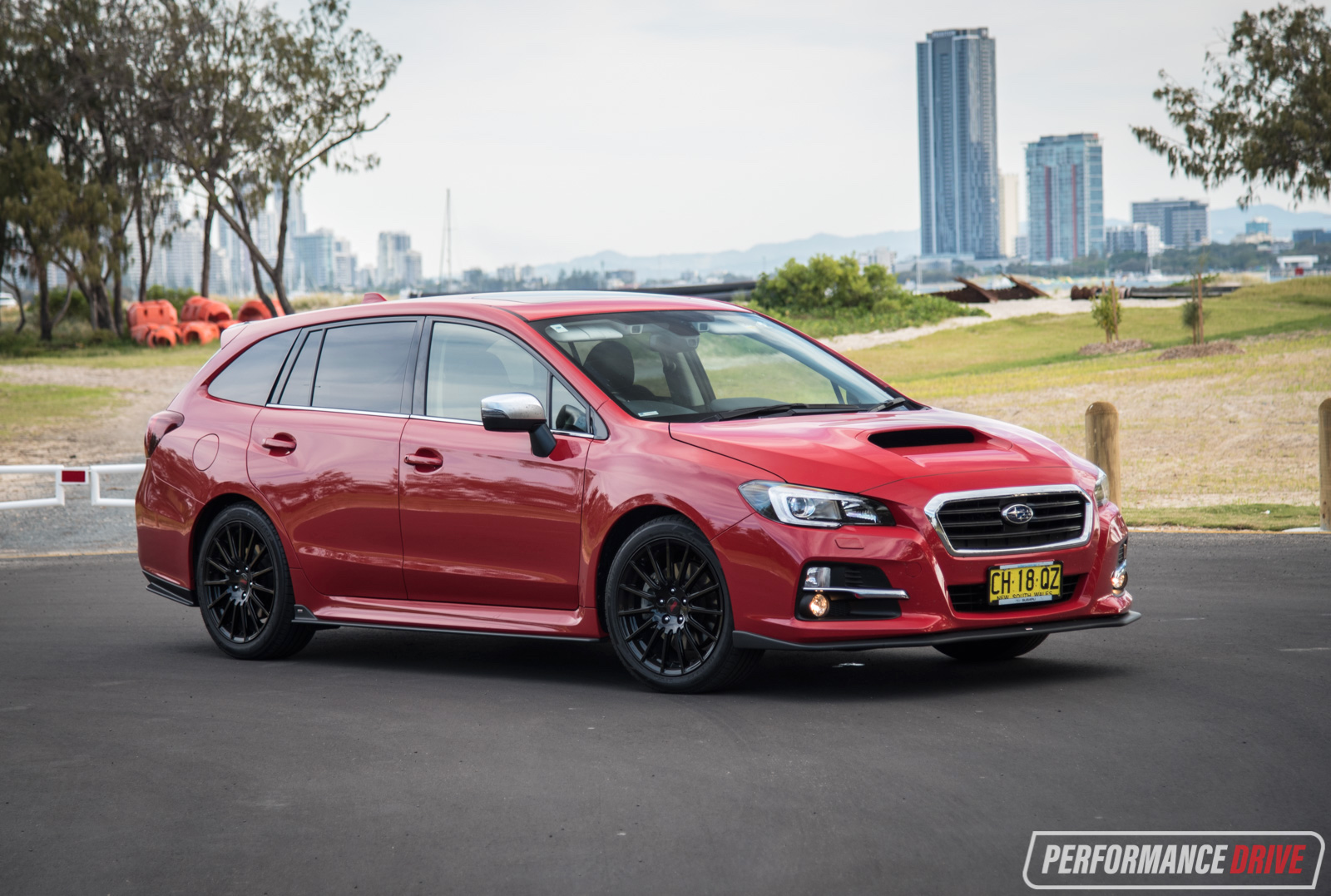 Every now and then a car pops up on the market that leaves you thinking, ‘why doesn’t everyone buy one of these?’ As far as we’re concerned the new Subaru Levorg has only two downsides, and one of them doesn’t actually affect the product physically. But we’ll get to them later. 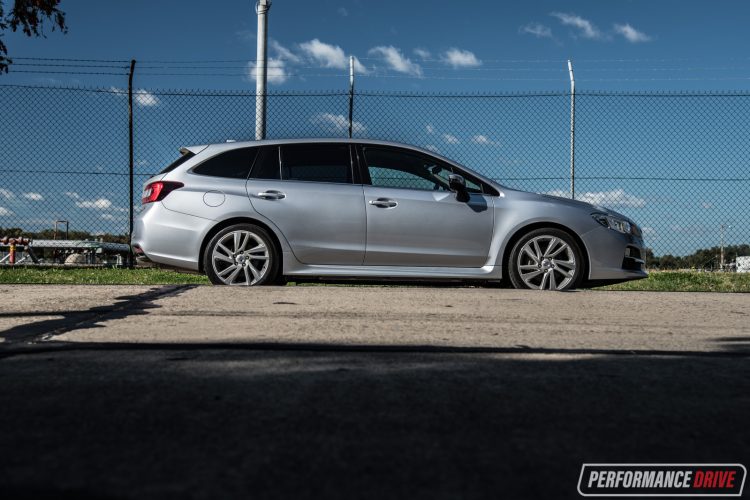 As you’ve probably guessed, the Levorg is Subaru’s new sports wagon. It comes in to replace both the Liberty GT and Impreza/WRX wagons that are no longer offered here. In Australia it is essentially a WRX wagon, featuring the same chassis and complete all-wheel drive turbo powertrain, along with an almost identical interior.

Three variants are on sale, including the GT, GT-S, and STI-inspired Spec B based on the GT-S. For this review we’re looking at either ends of the spectrum, having driven both back to back.

Prices start at a reasonable $42,990 for the GT and from $52,890 for the Spec B. Since the Levorg doesn’t really have a direct all-wheel drive competitor, aside from the smaller Golf R and more expensive Audi S3 Sportback (from $61,100), we think this is pretty good value. Compared with the base model WRX auto, which starts from $40,990, the auto-only Levorg seems like a catch. 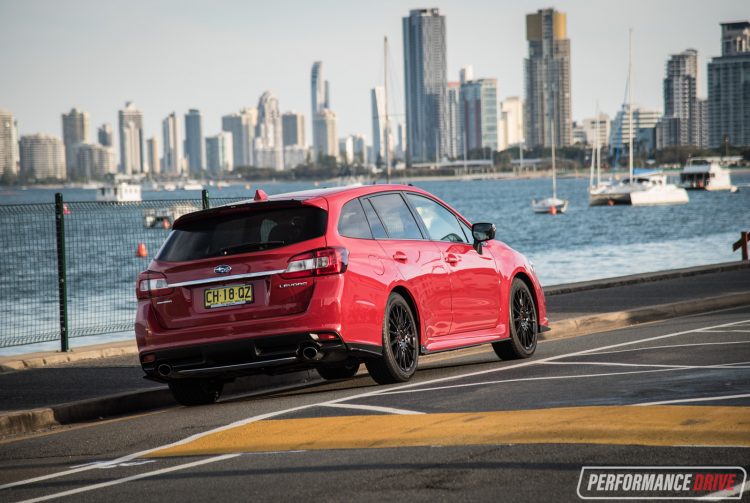 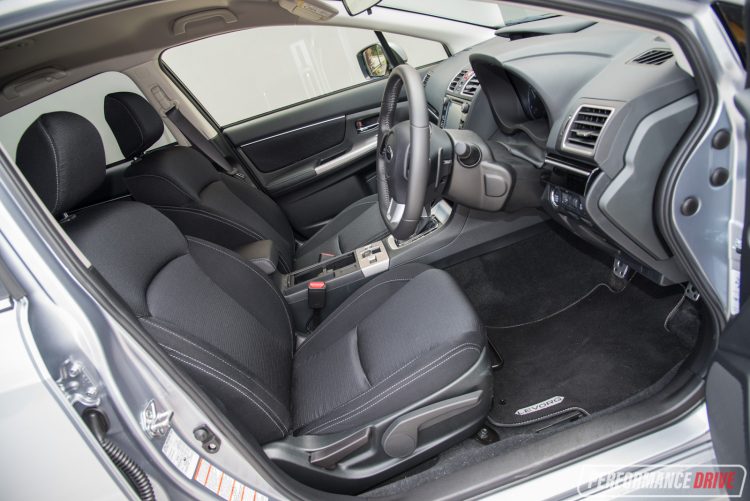 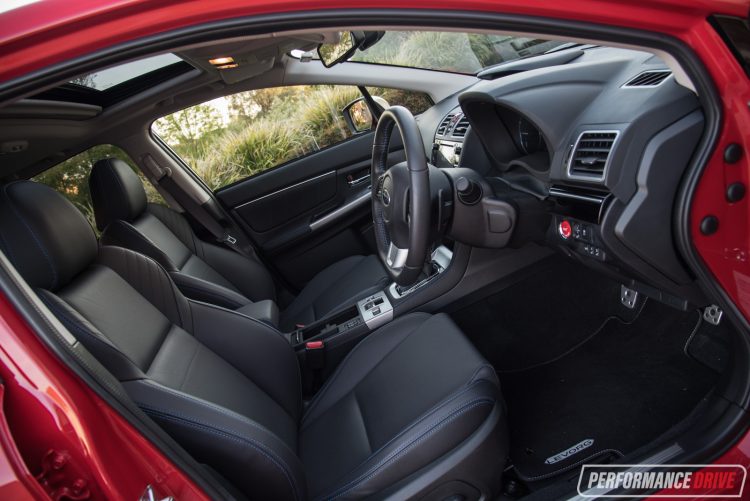 The Levorg really is a wagon version of the WRX. Power comes from the same 2.0-litre turbocharged four-cylinder engine, producing 197kW and 350Nm, in all variants in Australia. Unfortunately for us driving enthusiasts this comes exclusively matched to a CVT automatic transmission – we’ll complain in more detail in the drive part below.

For the base-spec GT you get fairly uninteresting cloth seats that are mildly bolstered and subsequently offer mild support in the corners. The material feels tough and durable though and will probably stand the test of time and frequent scuffing and food-dropping abuse dished out by any young ones. It’s a practical theme and it works for an entry-level variant.

In the top-spec Spec B you get sportier spec leather-wrapped seats featuring blue stitching, as featured in the GT-S. Front passengers are treated to heating functions and the driver can adjust the seating position using electricity.

After spending time in both variants here we actually like the more approachable GT for accommodation. It’s friendly design theme makes it feel more practical and liveable every day, even though you do miss out on the fanciness of the leather chairs. The GT is well-equipped too, with dual-zone climate control, a touch-screen media interface, and a separate LCD info display with boost gauge as standard. 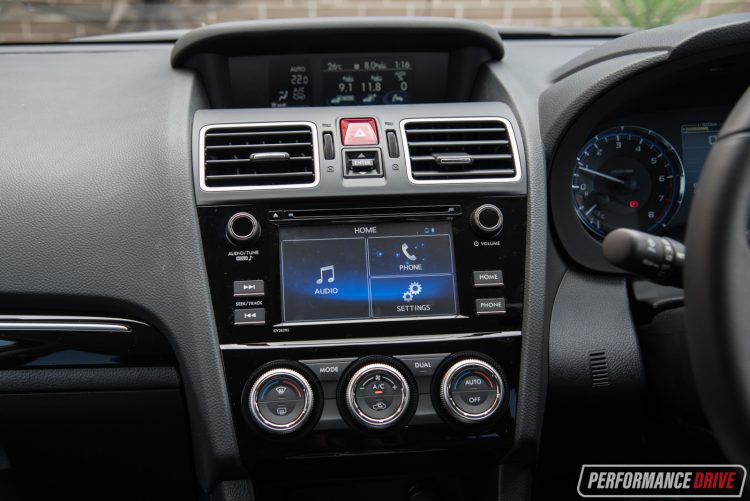 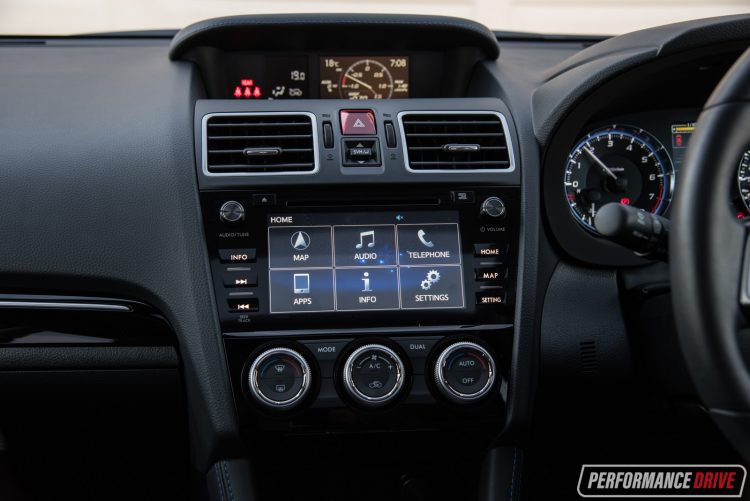 Going for the Spec B gets you an STI bodykit with Bilstein sports suspension, while inside is Subaru’s more widely used larger touch-screen interface (bottom image, above) with built-in apps including Pandora internet radio and satellite navigation. You also get twin USB ports in the front (two in the back for both GT and GT-S), auto headlights and wipers, and not just a rear-view camera like in the GT but also Subaru’s cool side-view camera so you don’t scratch up the 18-inch black STI alloy wheels. (The GT also comes with 18s.)

Passenger space is very respectable for the segment, offering a larger setting than a Corolla or Mazda3, for example. And like in the WRX, forward visibility is a standout, with big windows and thin pillars making it a breeze to navigate through tight city streets.

In the back cargo space is rated at 522 litres and can be expanded to 1446L with the rear seats folded. It’s a good useable space too, with a cargo blind protecting your goods from prying eyes and some storage pockets and hooks to secure smaller items. A braked towing capacity of 1200kg is applied to all variants, and underneath the floor is a space-saver spare wheel. 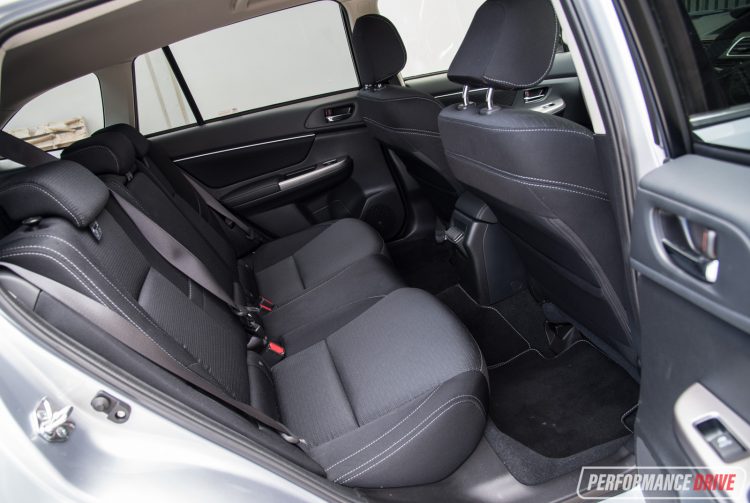 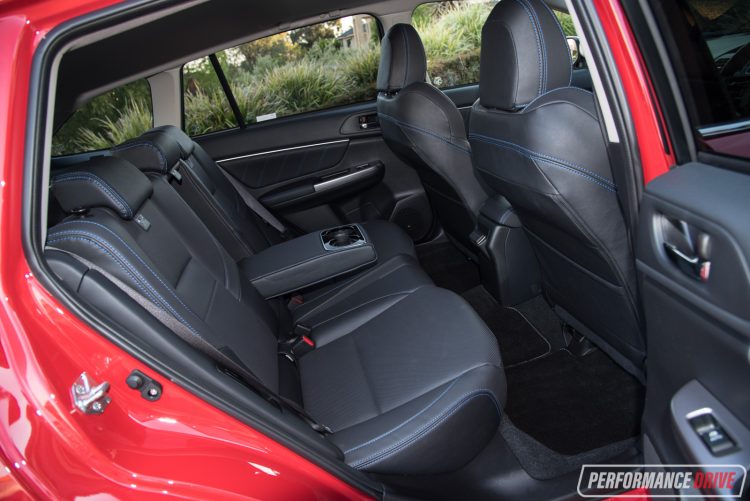 So, back to our two main gripes with the Levorg. The first is obviously the name. It’s derived from LEgacy, reVOlution, touRinG, but we can’t help but wonder why Subaru didn’t just call it something like… WRX wagon? We can only assume Subaru wanted to separate the Levorg from the WRX and perhaps also separate it from WRX buyers. Maybe it wants the Levorg to attract new buyers or come across more up-market?

We don’t know. But what we do know is it feels almost identical to the WRX in terms of driving manners, agility, and overall performance. This is all a good thing. It feels like a proper sporty wagon, and with three driving modes to chose from which alter the throttle response and gearbox behaviour, it’s also a very versatile machine. You can have fun in the mountains, enjoy a weekend escape down the coast, or just use it as a comfortable commuter.

Onto our second gripe. It’s the CVT auto transmission. We understand why manufacturers are starting to adopt CVTs. They have been proven to be more economical – especially good for the Impreza and WRX as it’s always been a bit thirsty. However, in a Mitsubishi Mirage a CVT doesn’t really detract from the driving experience, as there isn’t much there – nor intended to be – in the first place. In the Spec B with its STI bodykit, black wheels, and sports Bilstein suspension, it’s a big contrast. 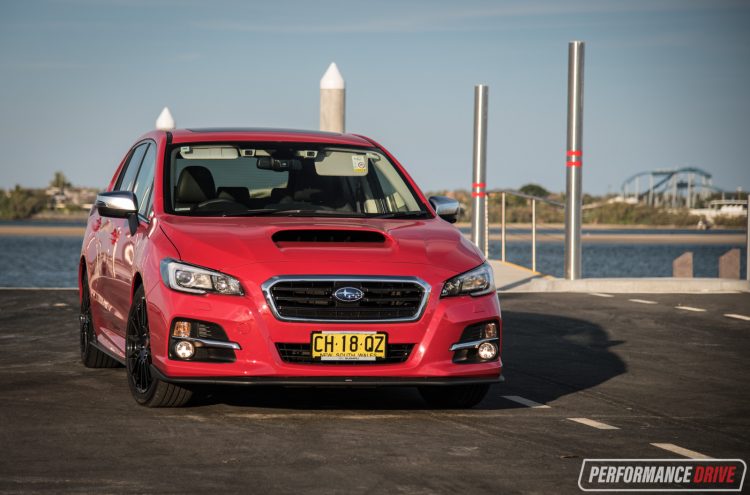 Down a long highway and in traffic conditions the CVT is smooth and decisive, making great use of the engine’s power and torque. In fact, it makes the engine feel like it has even more torque, elastically propelling the car like it’s being pulled from a bungy cord. When you want to have some fun and actually use the gears though, you can’t. Sure, there are artificial gears but it’s just not the same. In the end the best thing to do, we found, is to simply use the car as a practical sporty wagon. And like with the interior and packaging, it’s probably best to do that with the GT, or in standard GT-S form without the STI bits building your hopes up. Okay, enough complaining.

In other areas the Levorg features something Subaru calls “inter-layer” insulation in the window glass which helps to restrict high frequency noise from entering the cabin. And it seems to work. On the highway the Levorg cruises comfortably and quietly, providing a rather relaxed journey. The engine is very quiet too (almost too quiet for traditional WRX fans). There’s a faint boxer burble at idle but from there it turns into a subtle angry rasp.

Around corners the Levorg is thoroughly enjoyable. It uses a nice direct mechanical-feel electric steering system with excellent point-and-dart engagement and capability. Grip is, as you’d expect with all-wheel drive with active torque vectoring as standard, unbreakable. You can apply all of the engine’s power and rail around corners with pure confidence. 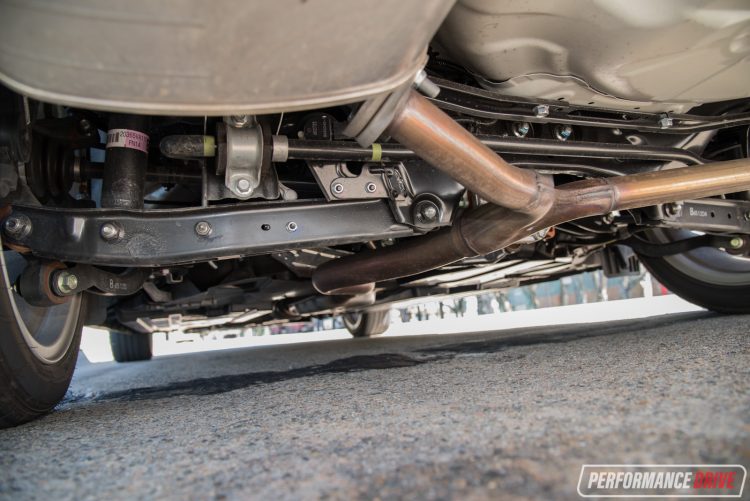 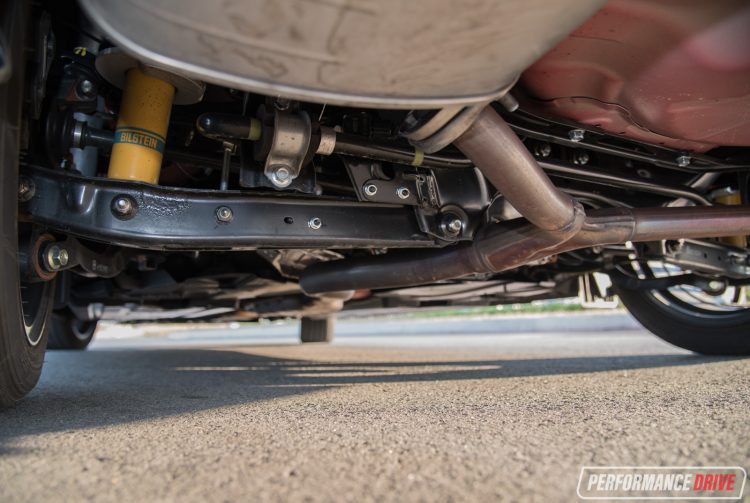 In the GT you get a mildly sporty non-Bilstein suspension setting that isn’t too firm for the daily grind. Going for the GT-S and Spec B the Bilstein setup is more taut and pokey and perhaps not as well suited to the daily stuff, but it does provide slightly better stability when you’re near the limit and really pushing around the bends. Strangely, both setups seem to lack compression range at the front end. As a result, country roads can cause the front end to bottom out relatively easily, with the GT a touch more prone to this. The Spec B does come with a special STI front strut brace which does seem to make the front end feel more consistent.

Perhaps the best part about the engine is the sheer flexibility. Peak torque is available from 2400rpm and is held all the way up to 5200rpm. This means you don’t have to depress the throttle all that much to get things moving. It also means fuel consumption is optimised. We averaged around 9L/100km during our time, witnessing a drop to 8L/100km during highway use. 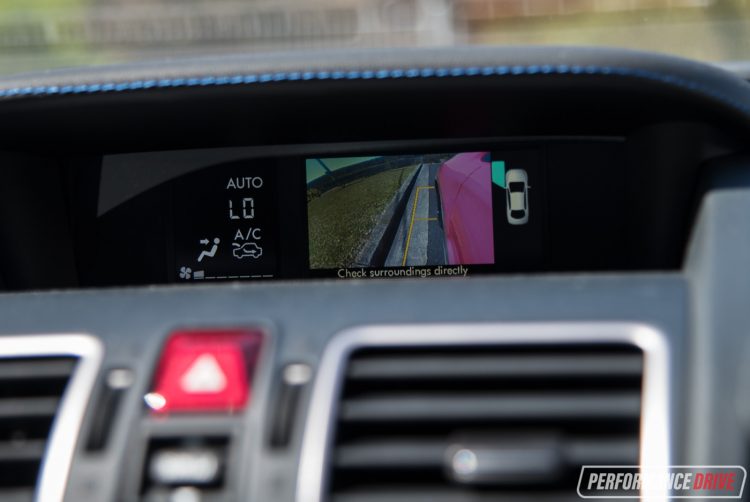 If you look at this car as a WRX wagon you’re probably going to be impressed with the handling and all-wheel drive power delivery, but you might be a bit turned off by the CVT auto and the relatively average 0-100km/h performance. If, on the other hand, you look at the Levory as a completely new product, as a cool practical wagon that also some some proper go-fast ability, then you’ll love the Levorg.

As we said, it’s one of those rare cars that’s likeable in almost all areas. It represents good value for money with plenty of features, it looks nice on the outside and feels a bit special on the inside (in GT-S/Spec B form), and it’s also pretty darn quick as a practical wagon. Not being called a WRX also makes it humble and modest in our opinion. A great product overall, and one of the best all-rounders we’ve come across in a while.