The new 2012 BMW M5 is one of only a handful of vehicles – including supercars – currently on sale in Australia with over 400kW of power straight from the factory. We thought we’d take the new model over to Marulan Driver Training Centre test track for our upcoming review. 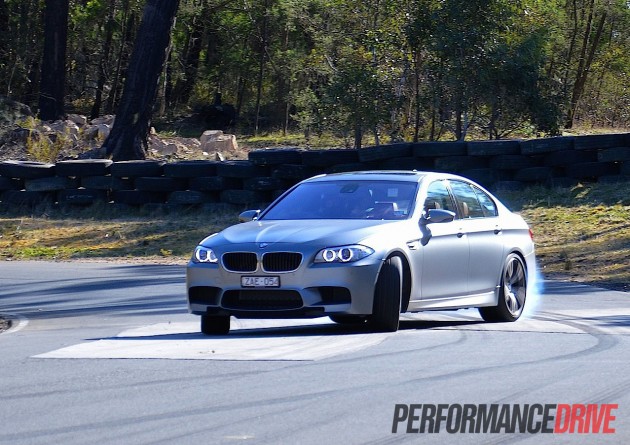 The ‘F10’ is now the fifth-generation BMW M5; a special performance line of flagship BMW 5 Series models that are equipped with BMW Motorsport’s finest and latest race-bred technologies.

For the first time in those five generations, the M5 is now turbocharged. It features a 4.4-litre twin-turbo V8 engine producing a monstrous 412kW of power and 680Nm of spine-condensing torque. It’s only available with a seven-speed dual-clutch automatic transmission.

First impressions? It has mostly blown us away, in every way. It offers upper-class levels of luxury, with soft yet very supportive leather seats front and back, as well as pretty much electric everything including the boot lid (and doors if you don’t shut them fully).

Of course, it also manages to blend in ferocious levels of performance. And we mean ‘levels’, as there are three driving settings to choose from for each the steering, suspension, and throttle. The traction and stability control is also adjustable, including a completely switched off mode.

Stay tuned for the full review in the coming weeks, including a quick track test video.