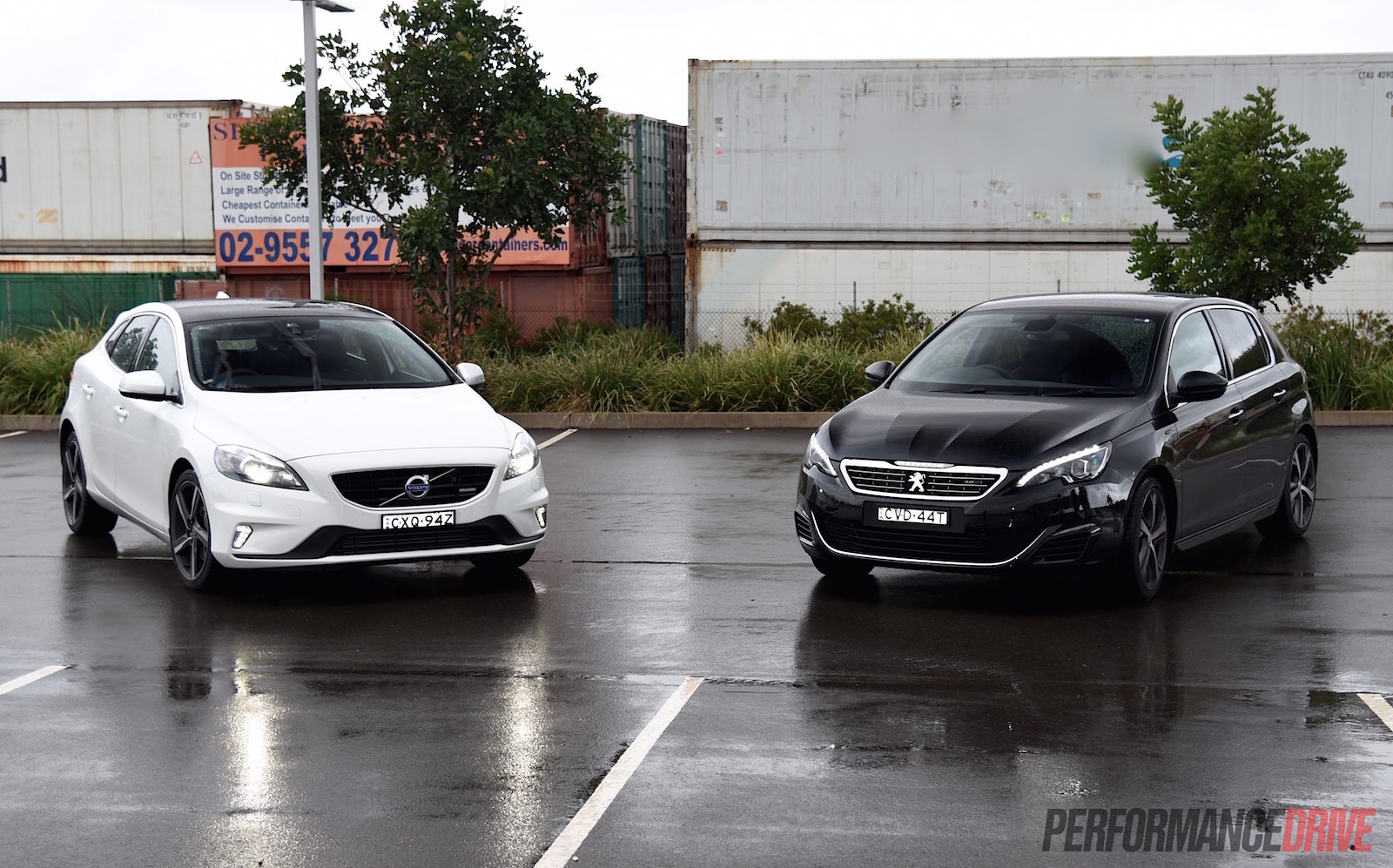 Okay, so the 2015 Volvo V40 T5 R-Design and the Peugeot 308 GT aren’t exactly spec-for-spec rivals. But if you’re after a distinct European ‘warm’ hatch that offers more exclusivity to the common and perhaps less practical hardcore hot hatches, these two could be the perfect alternative. 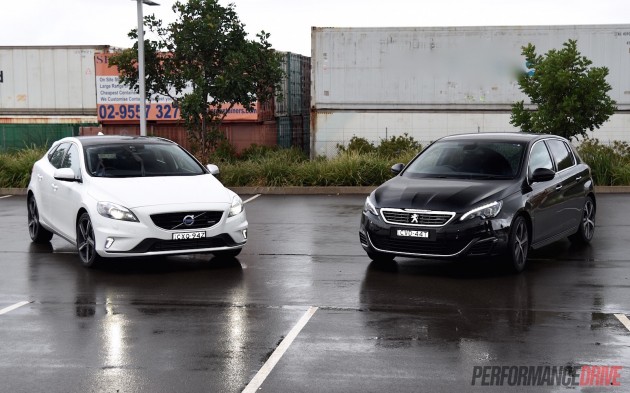 In the Swedish corner we have the 2015 Volvo V40 T5 R-Design. This is the top-of-the-range V40 at the moment, before a
(rumoured) Polestar version comes along. It features the company’s new 2.0-litre turbo four-cylinder engine, replacing the old 2.5-litre turbo five-cylinder. Given the beans it’ll generate 180kW and 350Nm. Power and torque are down compared with the old 2.5 (187kW/360Nm), but, partly thanks to the introduction of an eight-speed auto, economy and performance are improved.

From the land of the croissant and the cigarette, the 2015 Peugeot 308 GT comes with a 1.6-litre turbocharged four-cylinder developing 151kW and 285Nm. Although it is around 30kW down on power compared with the Volvo, the 308 is almost 300kg lighter in weight and actually represents a better power-to-weight ratio (7.9kg:1kW vs 8.1kg:1kW). As you would expect, the less powerful French car is more efficient, with an official average of 5.6L/100km versus 6.1L/100km in the Volvo.

Interestingly, both of these cars are priced higher than the popular European ‘hot hatch’ rivals, namely the VW Golf GTI and Renault Megane RS. However, these two are more luxurious and more comfortable, and are designed more so for everyday driving. Prices for the Volvo start at $50,400, with the Pug kicking off from $41,990. The Volvo only comes in automatic form and the Peugeot only comes in manual form. (Note: the 308 GT is available in automatic when optioned with the 2.0L turbo-diesel.) 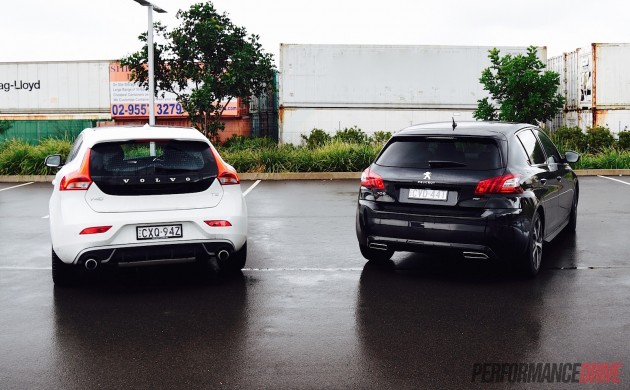 Overall dimensions are in favour of the Volvo, just. The V40 measures 4369mm in length compared with 4253mm for the Pug, with a 2647mm wheelbase versus 2620mm, respectively. In other words, there isn’t much in it in terms of the wheelbase and thus the cabins are similar in size.

In the front, comfort and space to move about is very similar. The Volvo uses a forward-slanted dash and a clean and clutter-free assortment of controls, while the Peugeot houses almost all of its controls into the touch-screen interface at the top. Headroom and legroom is adequate in both in the front, with about equal storage and pockets to put your things.

Both on-board interface systems come with an impressive concoction of functions as standard, incorporating sat-nav, a rear-view camera, and comprehensive connectivity. The Volvo’s eight-speaker sound system stands above the Peugeot’s six-speaker unit in terms of clarity and bass, and it comes with internet connectivity via a sim. Meanwhile the 308 gets an in-built hard drive.

We find the Peugeot’s touch-screen system to be easier to use. It also presents superior graphics. However, the Volvo’s system provides the user with more options in terms of car configuration and setup, and settings for the safety systems (if you option for them). On the plus side, the Peugeot offers selectable driving modes whereas the Volvo stays in a default setting (aside from ‘S’ mode for the transmission).

In the back seat, the Volvo just edges out for legroom in our opinion. The large sports seats in the front of the Pug seem to invade more space than the similarly sporty items in the Volvo. Although the rear bench space is very similar, passengers are likely to want to spend more time in the rear of the Volvo as it feel less claustrophobic. Compared with the segment standards, neither of these offer close to the best rear seat space; the Golf, Mazda3, and even the humble Corolla surpass these two.

Cargo capacity goes to the Peugeot, which offers 435 litres and up to 1274L with the rears folded down. The Volvo’s high boot floor significantly intrudes on space, leaving only 335L and 1032L. This is particularly puzzling given the V40 is longer overall. 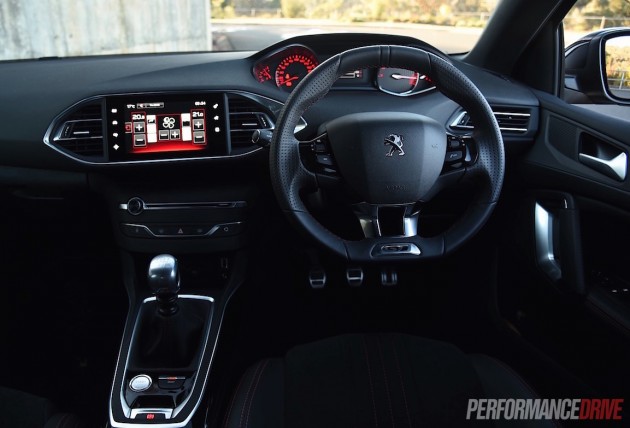 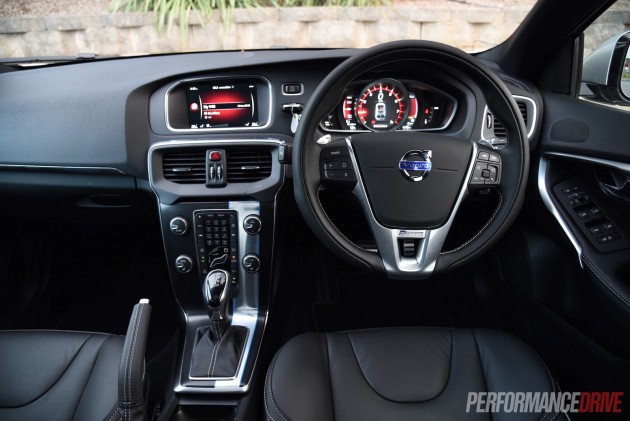 If you’re thinking about buying a vehicle along the lines of these two, you probably want something slightly less conspicuous than a proper hot hatch. In the city and suburbs both of these contenders are relaxing yet pleasurable enough to sidestep blandness. You get the hint of a sporty engine note (changeable in the Pug), and the steering and suspension are just taut enough to inspire a lively spirit.

They are easy to drive in that they don’t require special attention over speed bumps or the leg of Arnold Schwarzenegger to depress the clutch, in the case of the 308. Peugeot’s manual transmission is silky smooth with a light clutch operation, and power delivery comes on progressively with perfectly useable low-end torque. Matched with an eight-speed auto, the Volvo is obviously a touch more relaxing, but the throttle is surprisingly more responsive. You only need to feather the pedal to cause the front tyres to flex.

As an everyday vehicle, the Volvo is easier to live with, mainly because of its automatic, and also its stronger and higher mid-range torque output. 350Nm is available from just 1500rpm. In the Peugeot, its max 275Nm output is available from 1750rpm. It might not sound like much but out on the road you do have to work the Peugeot just that little bit harder to get things done. We timed 0-100km/h in 7.2 seconds in the 308.

Out on the highway and in a straight line, the more powerful Volvo is properly quick. It’ll eat away at speed with very little effort. 0-100km/h comes up in just 6.4 seconds (as tested). This is a quick time, let alone for a ‘warm’ hatch. It’s also quicker than the previous 2.5-litre version (PD tested 6.7 seconds). Overtaking is a breeze, needing only a gentle poke of the throttle to blur the scenery.

These aren’t fully fledged hot hatches but they can serve up ample excitement when you really push them, dishing out impressive grip and cornering ability, and a decent level of agility. The Peugeot is more inclined to sportiness, presenting a firmer suspension setup and nimbler steering. Steering response and feedback is also much higher in the Peugeot, with excellent communication through the wheel.

In the Volvo, the front-wheel drive system becomes overwhelmed by the engine’s 180kW. It tugs and torque-steers quite a lot under pressure, and it can come across as less stable and fidgety. You could say the Volvo is more exciting in that sense, but overall it is not as well balanced as the 308. It must be said that the automatic might not be as engaging as the manual in the Peugeot, however, the new eight-speed is a huge improvement over the previous six-speed. It comes with paddle shifters too.

For the overall driving character, the Peugeot’s lighter weight (1200kg versus 1468kg) layout with superior steering and suspension makes it a more playful and more competent drive. It feels confident when pushed hard and it responds to direction changes quicker and with convincing ambition. If you don’t consider yourself a sporty driver but you enjoy sheer overtaking power and brute force, put the V40 T5 at the top of your list. It’s a real sleeper. 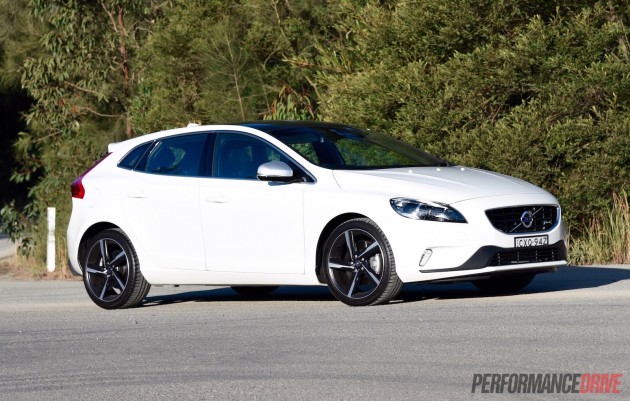 Despite Volvo’s reputation for offering industry-leading safety, the V40 T5 R-Design – the top model – does not come with all of the clever technologies Volvo offers for the V40; you need to option for them. The Peugeot does come with adaptive cruise control as standard. While the Volvo’s optional system is significantly more advanced, it does set you back an additional $6250. We think the top model should come with everything Volvo has to offer.

Of course, it all comes down to the price. We like the overall sportiness and ability of the Peugeot, and its chic Euro looks. We also like the extensive list of standard features that you get for the price – it even comes with massage seats. And for that reason, we crown the Frenchy the winner here. If price weren’t part of the equation, a fully-optioned V40 T5 would be a very tempting proposition. Volvo is definitely stepping into the right direction in terms of sportiness and automotive charisma. We’ll be keen to see what Polestar can do if it decides to work its magic here. 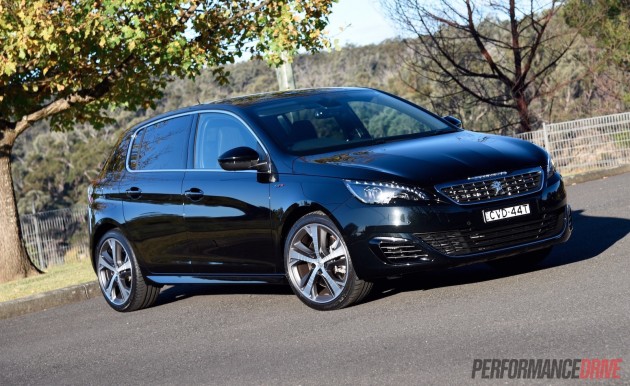