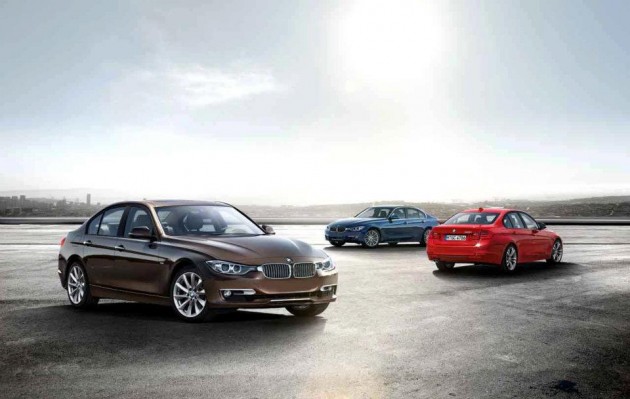 As previously reported, the entire 2012 BMW 3 Series range will be turbocharged, ranging from, at least initially, a BMW 320d turbo-diesel to a top-spec BMW 335i. A 2012 BMW 316d and BMW 318d will also join the lineup after the initial launch. In the middle of the range is where most of the new exciting stuff lies, mechanically anyway, with the inclusion of the N20 2.0-litre turbo four-cylinder unit for the 2012 BMW 320i and 2012 BMW 328i.

All 2012 BMW 3 Series unveiled variants feature an all-new body, in tune with the company’s latest design language. Previously speculations had pointed out that the new 2012 BMW 3 Series would simply be a shrunken version of the BMW 5 Series. And it does appear that way. But is that really such a bad thing? The BMW 5 Series has been regarded as quite a handsome and intelligent-looking thing in the recent past.

There’s that new, more pronounced upper grille section at the front with more slimline headlights that link up to the twin grilles, as well as a longer, flatter-looking bonnet compared with the outgoing range. The side also looks more like a solid slab with one main kink rather than the curvy profile of the current model.

At the rear, there’s clear design inspiration taken from the bigger BMW 5 Series. It offers large kidney-style taillights, all in red, while the deck of the boot lid features a faint lip or edge which rims the width of the panel.

Look forward to more details and on-going updates to this report very soon. We’ll provide full specifications and proper images continuously, as they are released.

Starting from the bottom of the range, which will be bolstered by a BMW 316d and BMW 318d (86kW and 107kW, respectively) in some markets later down the track, we have the BMW 320d. All new models, including the new 320d feature BMW’s Drive Performance Control. This provides the driver with four different driving modes; ECO PRO, Comfort, Sport, and Sport +, although Sport + is only for models that have been optioned up with sport upgrades such as sport suspension.

As speculated, BMW will be releasing a 2012 BMW ActiveHybrid 3, using the 335i powertrain matched to a 40kW electric motor system. BMW has also revealed that the xDrive all-wheel drive system option usually only available in limited markets, will be made for right-hand drive models as well as an option. It’s unclear what markets, including Australia, will get this at this stage.

Click play on the video below to see the 2012 BMW 3 Series out in motion on the road.