Dodge, Pennzoil and US NASCAR team Penske Racing have come up with an ultra muscly special edition 2011 Dodge Challenger SRT8 392 Pennzoil Penske model. The one-off black and yellow Challenger SRT8 will be given away as part of an online competition called the Pennzoil ‘Join the Pursuit’. 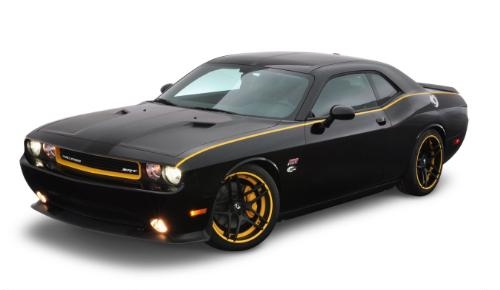 With help from Penske Racing, the 2011 Dodge Challenger SRT8 Pennzoil model features a distinct black and yellow colour scheme, which extends to the front grille, and yellow pin stripes along the edge of the Challenger. The Penske Racing team has also fit a set of matching black 20-inch alloy wheels with yellow highlights.

As for the powertrain hardware, the standard SRT8 6.4-litre HEMI V8 already offers 350kW of power and 640Nm of torque, so that was pretty much left alone. The Penske Dodge Challenger SRT8 does feature a CORSA custom cat-back exhaust system though to give it some extra rumble and, presumably, a few added kilowatts. A TREMEC six-speed manual transmission then sends power down to a Getrag limited-slip differential.

Other highlights include a satellite navigation system inside with a 6.5-inch display mounted on the dash, specially stitched and patterned bucket seats, a bespoke instrument cluster with an in-built g-force metre, and a Kicker sound system. Pennzoil Brand Manager Bree Sandlin said in a recent Motor Trend report,

“We are extremely excited to have collaborated with Penske Racing and Dodge to create such a unique street car with such a NASCAR feel.”

To go in the running to win this tough-looking Dodge Challenger SRT8 Pennzoil edition, all you have to do is obtain a special code from one of Pennzoil’s products and submit it through the Pennzoil ‘Join the Pursuit’ competition website. Alternatively, entries can also be made through submitting a code sourced from the website.

Unfortunately, entries to the competition will only be accepted from US residents. Entries run from September 1 through until October 31. Head over to www.pzljointhepursuit.com for more details and images.

What do you think of the Pennzoil Penske Dodge Challenger SRT8 though? It looks very mean and menacing doesn’t it? Like a cool retro American muscle car. Should Dodge perhaps consider bringing out a small limited production run of Pennzoil models?