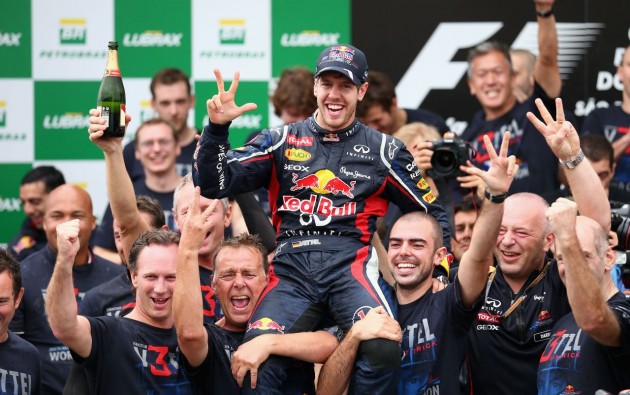 Just a measly three points separated Vettel and Ferrari’s Fernando Alonso, who finished the race second. McLaren’s Jenson Button 2.7-second win over the Spaniard was all that stood between him and his third world title.

Vettel had to fight his way from the back of the pack at Sao Paulo after being spun by Williams driver Bruno Senna on a wet, but drying circuit start to the race.

Conditions were unpredictable and Vettel pitted twice in three laps, the second of which was delayed after his team struggled to remove a tyre warmer from one of the Pirellis.

But he went on a charge and after passing fellow German and retiring Mercedes driver Michael Schumacher on lap 64, he jumped ahead of Alonso in the projected standings.

After 20 races, it was all that was the difference between the rival drivers. The 25-year-old was naturally delighted to score a hatrick of F1 titles.

“I am very, very happy,” Vettel said post-race. “The most important thing throughout the season is that we kept pushing and remained ourselves.

“We just try to do our thing and stick to the route that we know and that’s what made the difference. Some people try to play games, but we never get distracted, we keep going our way.

“Everyone at (the Red Bull Racing factory in) Milton Keynes (England) and here at the circuit, they are always pushing so hard and we really stepped up our game in the second half of the season.

“I would like to thank everyone in the team and at Renault. There’s no one in this team that feels more important than any one else, we all push together, alongside each other, it’s one big force and I’m very proud of that.

“It’s unreal what has happened. To win a third title, especially here where one of my heroes Ayrton Senna was from, it’s difficult to put into words.

“I was crying in the car but my radio wasn’t working, so I’m maybe happy for that! Tomorrow I can probably say more, but now I just don’t have the right words.”

Webber admitted he just didn’t have enough pace to match the McLarens and Ferraris.

“The race lived up to expectations today and the conditions were obviously very tricky for all of us,” Webber said after finishing the 2012 season sixth in the standings.

“We weren’t particularly strong today pace wise and both Seb and I were pretty vulnerable on restarts, as well as the start of the race on slicks. I got hit pretty hard on the inside, I think it was one of the Sauber’s, and we had to press on from there. We got probably what we could have out of today and we made a good call to go to the intermediate tyres when we did.”

The Australian driver however praised his teammate on another title.

“For Sebastian, it was a great effort,” Webber said. “He has joined a pretty decent club now and has even set his own some ways, the youngest ever World Champion and now a triple World Champion – you’ve got to take your hat off to him.”