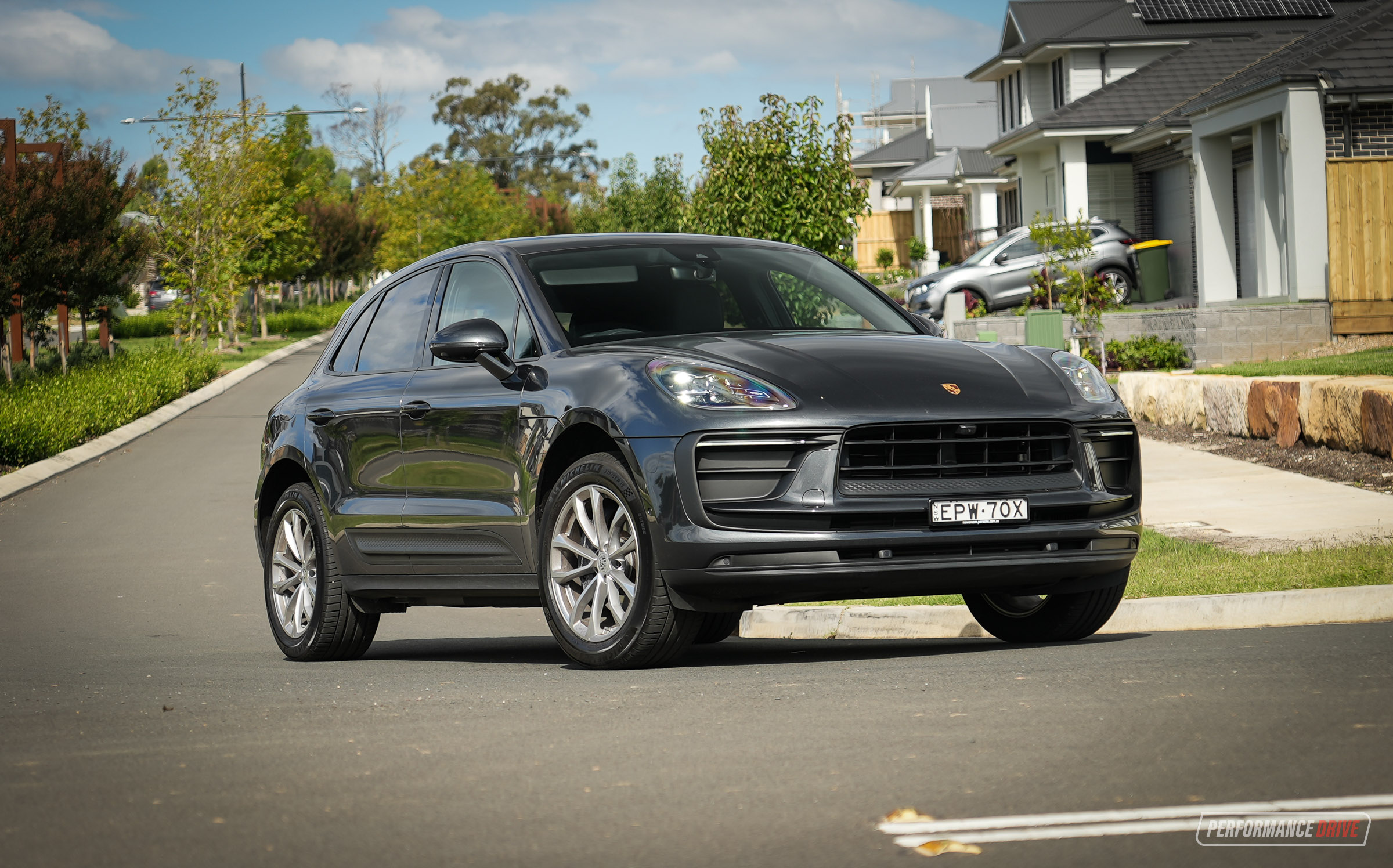 This is the most affordable Porsche you can buy. But does the entry Macan 2.0T still offer plenty of the brand’s alluring characteristics, such as exceptional build quality, a raw and engaging driving feel, and a clean and clutter-free design inside and out? 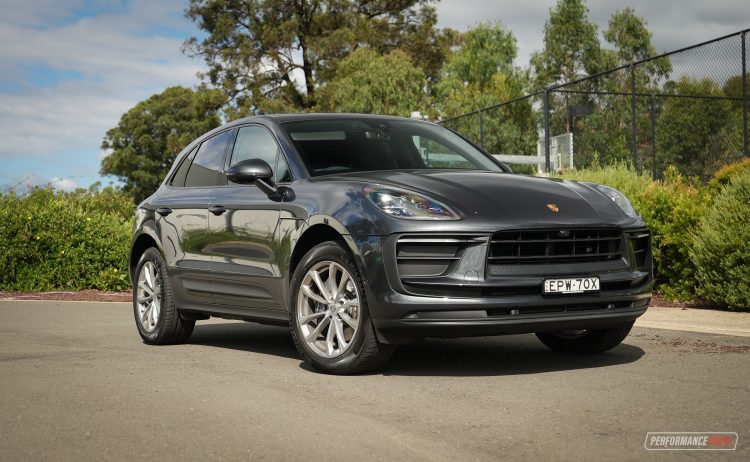 For the 2022 model Porsche is offering three main variants; the Macan, Macan S and Macan GTS. The two upper models feature a 2.9-litre twin-turbo V6 developing either 280kW or 324kW, while the entry model uses a 2.0-litre VW/Audi-designed turbo-petrol four-cylinder.

Outputs have been boosted over the previous model, from 185kW and 370Nm to 195kW and 400Nm. For a base model in this mid-size premium SUV segment, these are some impressive numbers. Porsche claims 0-100km/h in 6.4 seconds. As far as we can tell this makes it (officially) the quickest-accelerating base model in its class, with a petrol engine.

Now this is where things get interesting. The price. It originally started from $84,800 when it first arrived last last year (launch review here), but like many brands Porsche has had to increase its prices, likely due to ongoing production and supply concerns. Even still, the latest starting price of $89,300 isn’t that much higher than the main rivals with equivalent power and performance. 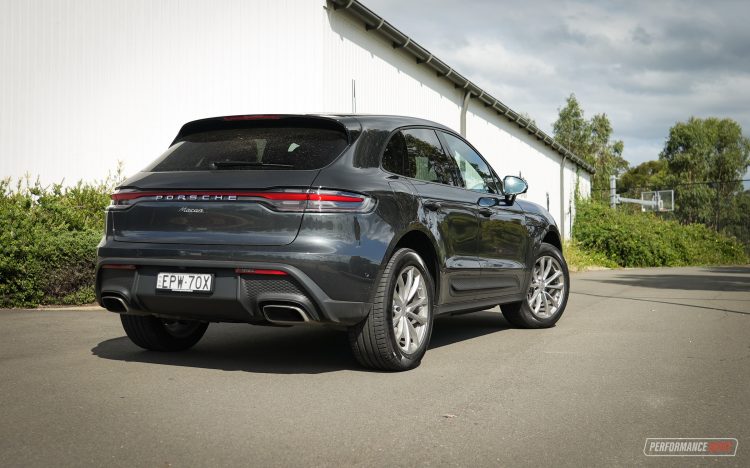 Visually, the base model can be difficult to spot. The bodywork and major details are pretty much the same across the board. However, the front corner intakes are open in the V6 models to feed a pair of intercoolers but closed off in this application. The V6 models also get quad-outlet exhausts compared with the conservative twin setup presented here, with a bespoke diffuser section enveloping the pipes.

Underneath, the Macan continues to be based on the VW Group MLB platform, closely related to the Audi Q5. The Macan S and GTS come standard with Porsche Active Suspension Management, while this entry model is equipped with a simpler sports suspension setup. PASM can, however, be fitted here as an option for an additional $2180, and even the height-adjustable air suspension is available on this base spec, from $4970 (includes PASM). 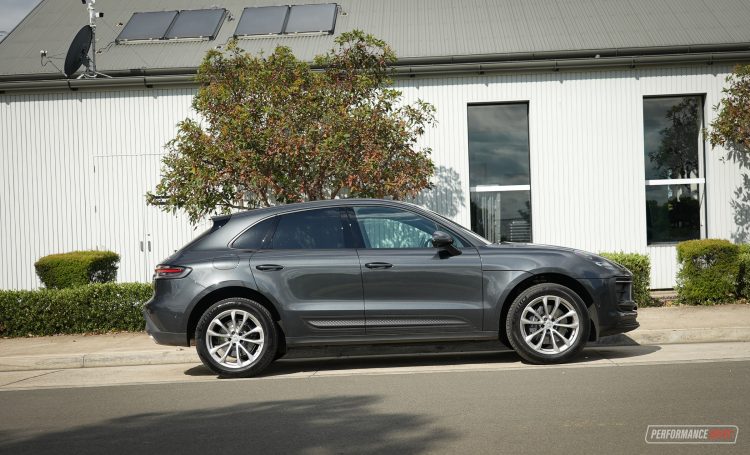 The 19-inch alloy wheels shown here are probably the main giveaway that this is the base spec. These feature quite tall 235/55 front and 255/50 rear Michelin Pilot Sport 4 SUV tyres. It’s worth noting the equivalent Audi does not feature staggered-width tyres like this. That’s just one example of the extra attention to detail that Porsche applies.

If you are planning on touring the countryside and even hitting some dirt, this is the setup you want as the tallish tyres can absorb impacts and rough surfaces much better than the higher-performance yet lower-profile setup employed on the upper models. If style and presence is more your thing you can option up to a range of 20- and 21-inch items as well, including cool GT Design or racy RS Spyder Design wheels. 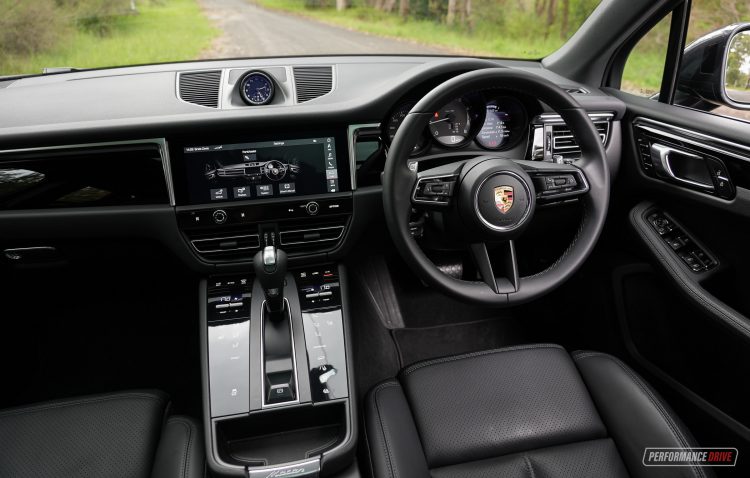 And that’s perhaps one of the great things about going with the base model. The majority of customers in high-end markets tick a range of options for their order. And with this variant you can option it up essentially from the bare foundations to create a really unique package. You might prefer the regular sports suspension, for example, but you want the full Sport Design kit and Burmester surround sound system. You can do it with this.

The interior doesn’t immediately scream out that this is a base-spec car. You get a pair of supportive and comfortable seats in the front, although they are not quite as sporty as those in the S or GTS, with a perfect driving position and that brand-characteristic upright steering wheel. The steering wheel feels awesome to hold, like in any Porsche model. The rim is relatively thin by today’s standards and the diameter is small and agile. Perfection. 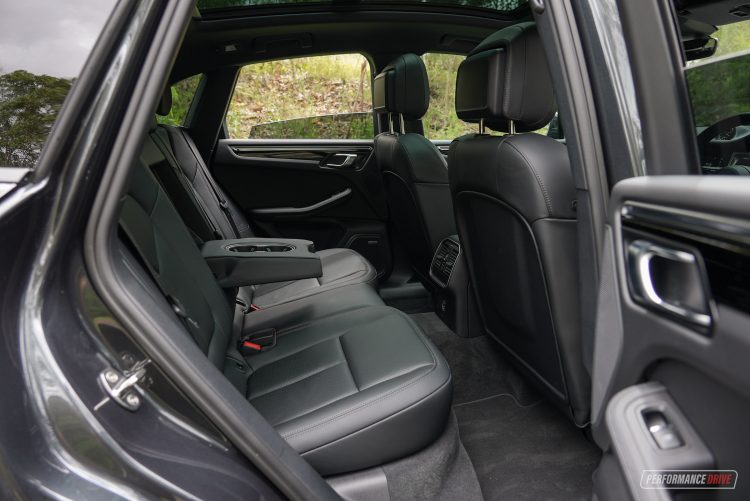 On the dash is the range-wide 10.9-inch touch-screen applied to all variants, presenting super-crisp detail. We wouldn’t describe it as presenting the most amazing or captivating graphics and animations, being mostly black and white. But this reserved and somewhat conservative theme matches well with Porsche’s heritage. New for the 2022 facelift is a more sophisticated centre console, with cascading controls sitting flush under a refined glass-like panel. This falls in line with the showroom theme and looks much nicer than the old, rather busy button layout we feel.

Storage and passenger space is more confined compared with its main rivals. It goes for an intimate and cosy atmosphere rather than open and airy. Especially in the rear seat area. This is a bit smaller than the mainstream mid-sizers, such as the Audi Q5, BMW X3, and Mercedes GLC. The centre position is quite tight in comparison, and the relatively narrow width tends to condense shoulder room or at least the perception of.

Boot space is rated at 488L or up to 1503L with the rear seats folded down. Again, it is less than what the key rivals offer, most of which can consume around 550L/1600L. However, you still have plenty of space for a weekend away or to accommodate the weekly shopping. And after all, this is a Porsche. Absolute maximum practicality is not the primary focus or priority here. 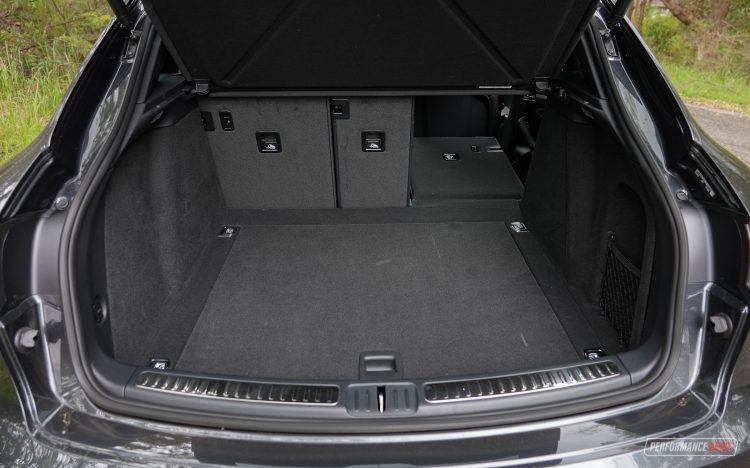 Under the bonnet you’ll find the familiar 2.0-litre turbo-petrol four-cylinder engine. It’s a VW-developed unit, based on the ‘EA888’ found in various Audi and VW vehicles – there’s even Audi logos on some parts if you look closely. Porsche has redeveloped the unit for the 2022 Macan, and applied its own tune to ensure it is lively and up to its quality standards. There’s a new turbocharger to help boost the power by 10kW, as well as higher-pressure fuel flow (now 350 bar) to help distribute more evenly between cylinders, and revisions to the timing chain and new piston rings to help optimise refinement and efficiency.

It starts up with a deep tone, immediately suggesting this is not your average SUV. Buyers can option up to a sports exhaust system as well, adding black or silver tips, for $4540. Unlike most rivals with a similar engine configuration this sounds beefy. It stands out, enhancing the awe factor, which we think is very important for any high-end product. 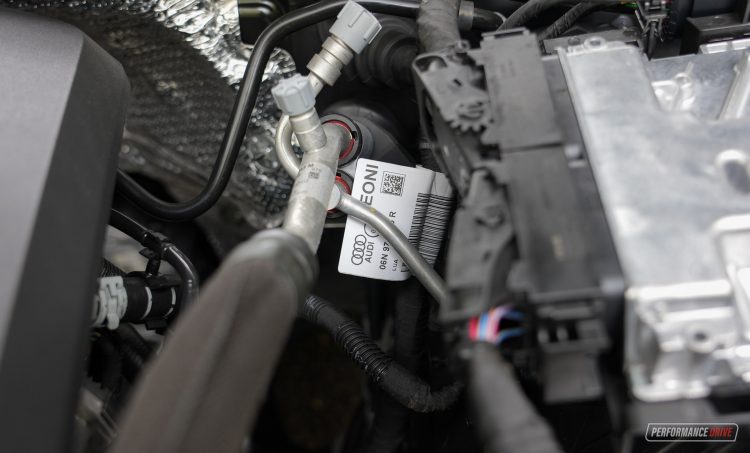 The engine has no trouble propelling you out of corners, with all 400Nm available from just 1800rpm and held until 4500rpm. That’s a huge mid-range pull, resulting in an exciting feel pretty much the entire drive. The kickdown in particular is incredibly punchy for this power level. Much of that is thanks to Porsche’s brilliant transmission calibration. In this case, a seven-speed dual-clutch auto. It would be nice to have Porsche’s newer eight-speed dual-clutch auto here, but we’re assuming it’s too large/beefy for a relatively modest 2.0L turbo (compared with the 911 and Panamera etc.).

On a private road we performed some acceleration runs with a Racelogic Vbox Sport. This test vehicle achieved 0-100km/h in just 6.06 seconds, with Porsche’s claim of 6.4 seconds remaining quite conservative. It’s a very quick vehicle, much quicker than many rivals that use a 2.0L turbo. It’s also quicker than the previous model according to our tests. In 2019 we recorded a best time of 6.21 seconds in the old 2.0T with the same equipment and same strip of tarmac. 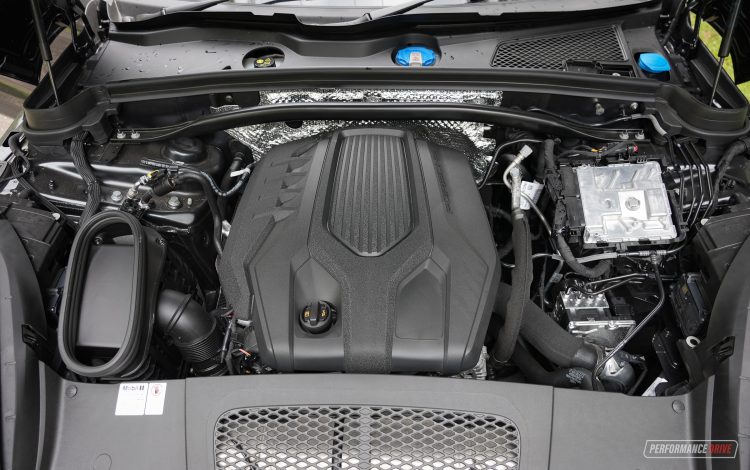 Fuel economy is officially rated at 9.3L/100km, up from 8.9L/100km before. However, we suspect the latest rating is under the newer WLTP protocol which aims to find a more real-world result. We averaged 11L/100km during our week of testing. These are not particularly attractive figures in any case. And if we calculate our ‘power-efficiency’ ratio it returns a value of 20.96kW:L/100km. We’ve always said any value over 20 is good, but in the case of a modern Porsche we’d expect better than just good. 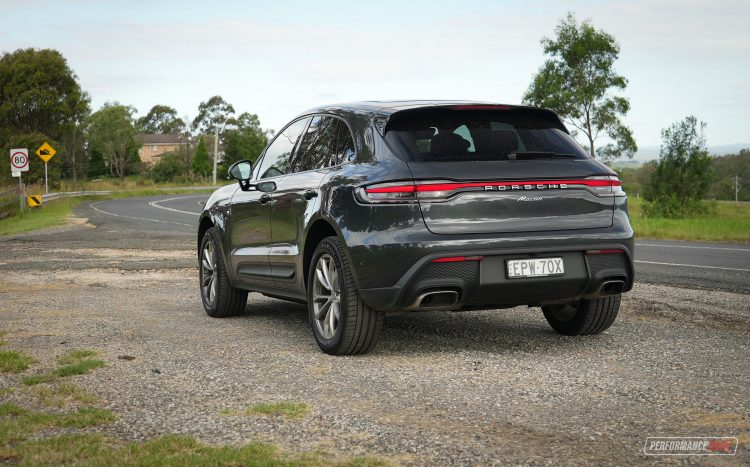 Out on the road the standard sports suspension is taut and controlled but comfortable enough, even on rough roads. The handling is, as you’d expect, very precise and confident, yet also predictable and playful. You can actually chuck it around very aggressively and it responds much like a properly set up hot hatch. This is not something you could say of most of the rivals. This doesn’t feel heavy, at all. And in 2.0L form with a tare weight of 1798kg it is one of the lightest packages in its class.

The most enjoyable element is easily the steering. Not only do you get to engage with that lovely sports steering wheel, the connection to the wheels is raw and unfiltered. That’s not to say you’re bombarded with unwanted kickback or roughness, we simply mean you can feel what the tyres are doing and instantly understand how they are managing any of your commands, regardless of the conditions. Being assertive and overly pushy in tighter switchbacks doesn’t change a thing. The Macan is built for this and simply does exactly what you want it to do. 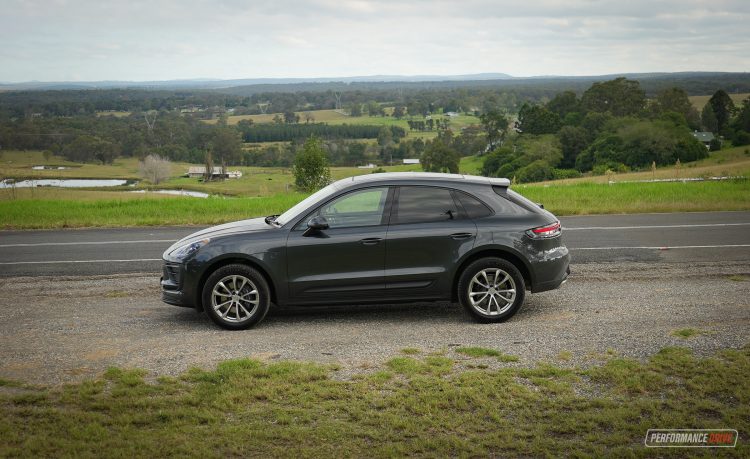 So, to answer the original question, is this a real Porsche? We think it is, mostly. If you can afford to step up to the S or GTS to enjoy the splendid V6, they, to us, seem more in line with the brand’s six-cylinder tradition in terms of sound and progressive power delivery. We’re not saying this 2.0T option isn’t good, but simply the V6s are even better.

Overall though the base Macan is not just a taste of the Porsche experience. This is the full meal in terms of look and feel, quality, and driving character. It’s both a competent driver’s companion and a daily workhorse.

CONS:
– Chunky price climb in recent months
– Visible Audi logos under the bonnet could be off-putting to some
– Porsche’s newer 8-speed PDK is nicer but not available here