Jeep has confirmed it will be unveiling the all-new 2022 Grand Cherokee L ‘WL‘ later today. The new model is one of the most anticipated SUVs of the last couple of years, especially with the current generation being on the market for 10 years now. 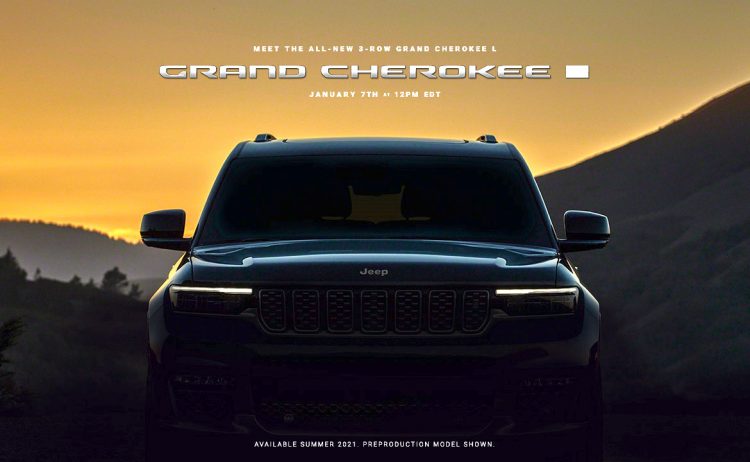 No specific details have been revealed as yet, but Jeep says the new model will offer “exceptional performance, comfort and functionality” as well as improved on-road refinement. The new model will also showcase “premium styling” which is perhaps what the current model has been renowned for.

On Jeep’s Facebook page a teaser image confirms the name ‘Grand Cherokee L’, which points to its three-row seating capacity. Being a 7-seater should really help boost its market appeal. At the moment the Grand Cherokee is a five-seat only vehicle competing in the same vehicle segment as many popular 7-seaters like the Toyota Prado and Kluger, Kia Sorento and Hyundai Santa Fe, and the Isuzu MU-X.

The teaser also shows a dark silhouette of the front end. With the brightness turned up a bit, we can see there is a thinner front grille and matching headlights. It actually looks pretty similar to that Grand Wagoneer concept that was shown last year. Traditionally, seven slots are featured in the grille, and it looks like the model will continue with a bulging bonnet and strong wheel arches for a macho stance.

As far as we know the WL Grand Cherokee is set to switch to FCA’s Giorgio platform, like what is seen under the the Alfa Romeo Giulia and Stelvio. However, for the big SUV there is obviously going to be some significant changes to accommodate off-road performance and a large cabin. Even so, this will be a big leap forward from the current platform, which is a 10-year-old Daimler-Chrysler layout.

Other interesting things for the new model are set to include a nice big and flush touch-screen for the on-board climate, media, and vehicle settings, with another digital screen for the instrument cluster. There’s talk of Jeep applying more up-market tones and materials inside as well.

All will be revealed via online video stream tonight, at 4am AEDT, January 8. Australian market entry is expected within 12 months or so.