This is the Renm Performance Lamborghini Aventador. Yes, a tuned version of the epic all-new V12 Lambo – not that it needs any sort of tuning, offering mind-blowing performance straight out of the factory. 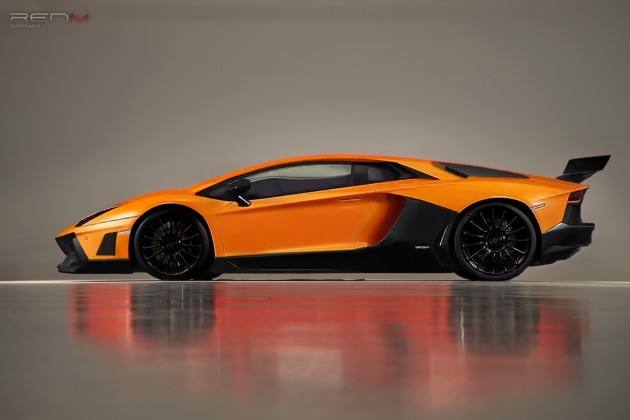 The first aspect you may notice is the additional contrasting black highlights, such as the huge adjustable carbon fibre rear wing which extends upon the Aventador’s sharp and aggressive styling. A matching carbon rear fascia and diffuser is also added to the rear, while the front gets a new, even sharper carbon chin.

The upgrades don’t stop there, there’s also a set of centre-lock LE-C lightweight racing alloy wheels, painted in black, a lowered sports suspension kit, and various revisions to the interior including a new steering wheel.

In the back is where it’s all happening though. The Renm Performance Lamborghini Aventador features a recalibrated ECU, a new titanium exhaust system – sure to sound unbelievable – and a new air intake system.

Renm Performance says the tuning pack is still in its preliminary stages. It says engine power figures will vary in different areas, as some regions use different fuels and so on. Overall, Renm says to expect around a 10 per cent increase in power.

Just to refresh your memory, the Aventador comes with an all-new 6.5-litre V12 engine producing 515kW of power and 690Nm of torque. Add 10 per cent and we’re talking 567kW.