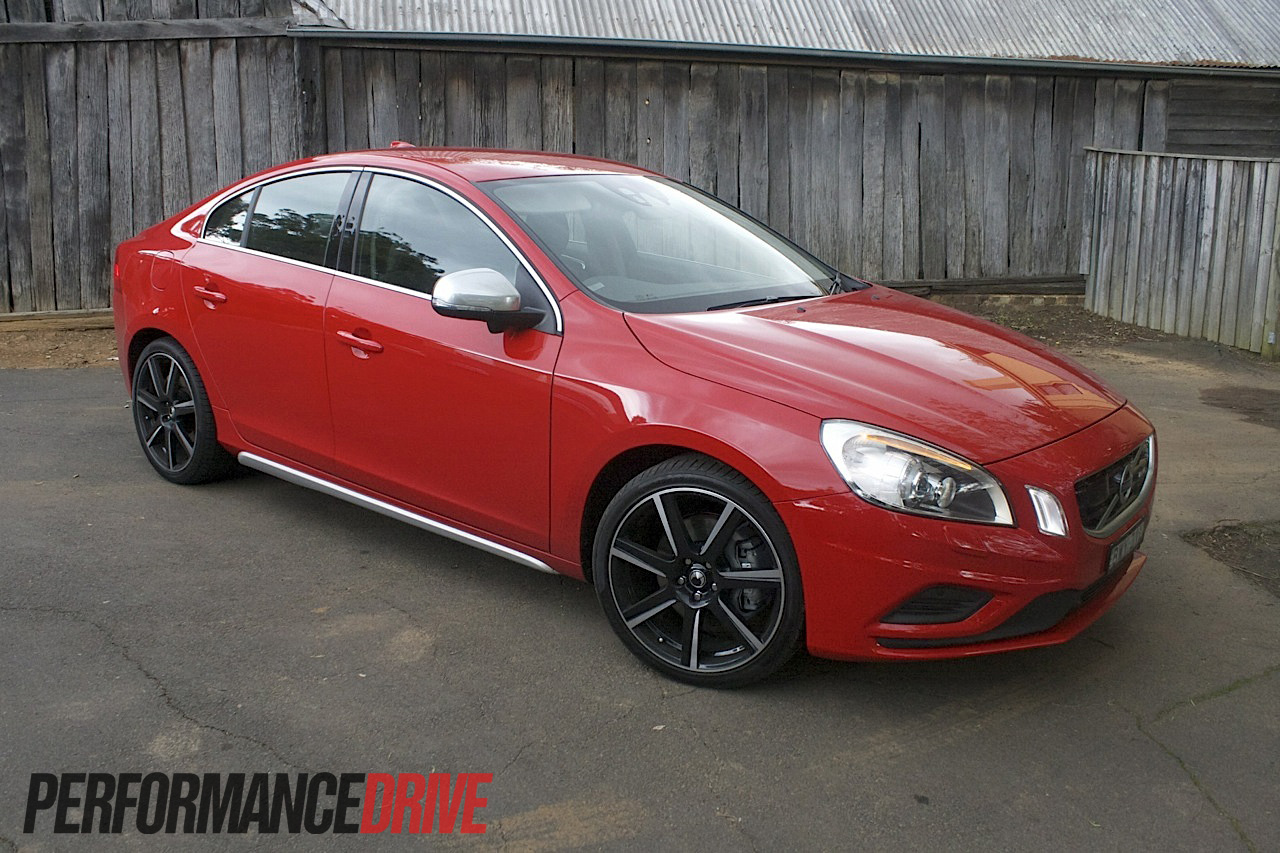 Unlike the Polestar tune you can option on various Volvos from the showroom, the 2012 Volvo S60 T6 Polestar is available as a bespoke, limited edition model that goes a bit further than an engine computer retune. Just 50 of these bad boys are on sale, all in S60 sedan form. 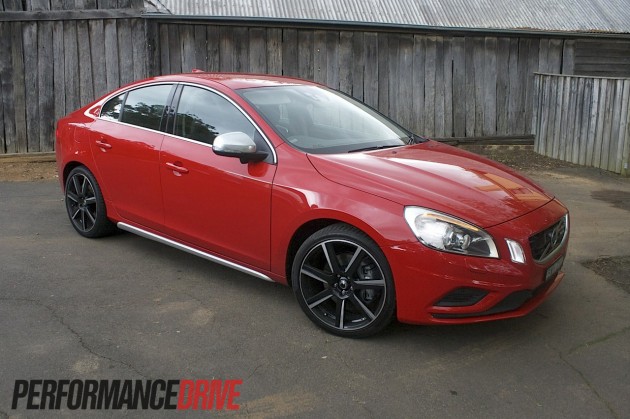 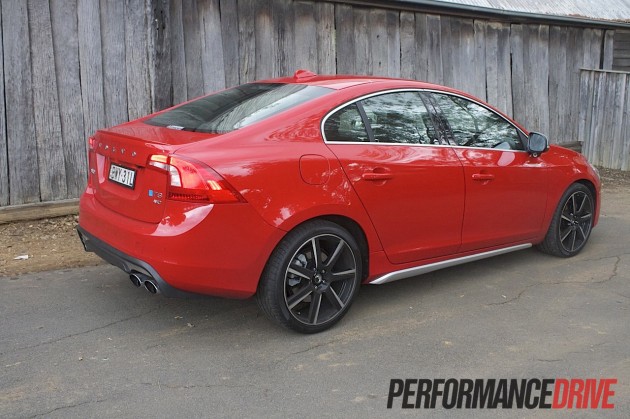 The Volvo S60 is a mid-sized luxury sports sedan. It’s based on the current Ford Mondeo EUCD platform, like the XC60 SUV, and it’s available in S60 sedan and V60 wagon form. It’s also available in either turbo petrol or fuel-efficient turbo diesel form, with a front- or all-wheel drive layout.

For the ultimate in performance though there’s this limited edition S60 T6 Polestar. Basically, it’s Volvo’s answer to cars like the BMW 335i Sport and the Lexus IS 350 F Sport. It takes the traditional and somewhat conservative Volvo personality and throws a dirty martini in its face.

Straight away you’ll notice the gob-smacking 19-inch machined alloy wheels with sexy black spokes. These set it apart from the rest of the S60 range. It also gets a crisp Heico Sportiv diff-back exhaust system, as well as all the usual fruit you get with the T6 R-Design package such as sports suspension, and a focused interior. 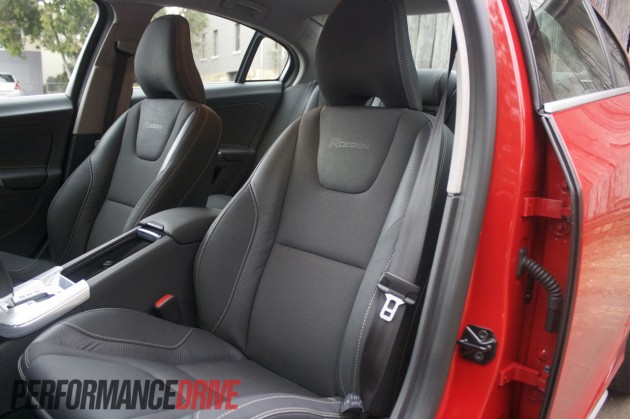 Power comes from a 3.0-litre turbocharged straight-six engine (also starts life as a Ford) producing 242kW of power and 480Nm of torque. It’s only available matched up to a six-speed automatic transmission with all-wheel drive. 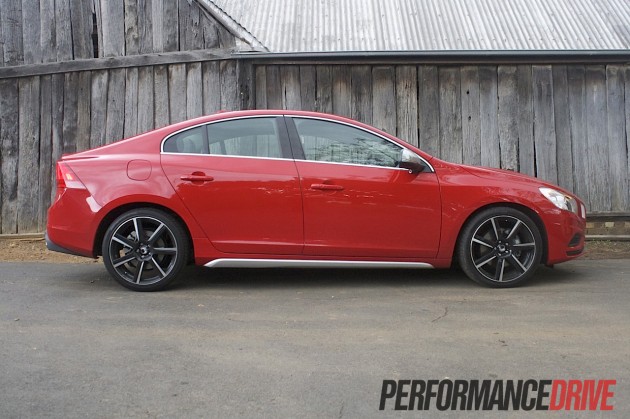 Being a special edition, you might expect a bespoke interior. Instead, a little build number plaque sitting on the lower dash is the only thing that let’s passengers know this is a special model.

That’s not to say it’s boring though. The Polestar gets the full R-Design package. This includes sports bucket seats – electrically adjustable in the front – with ‘R-Design’ embossed into the back rests. These come covered in a soft textile and neoprene-style material, which is quite refreshing over the more usual leather. Leather is also available at no cost.

Heated seats are optional, which is a tad surprising for a top-spec European sedan. These will only set you back $325 though, and they can be optioned for the rear as well. 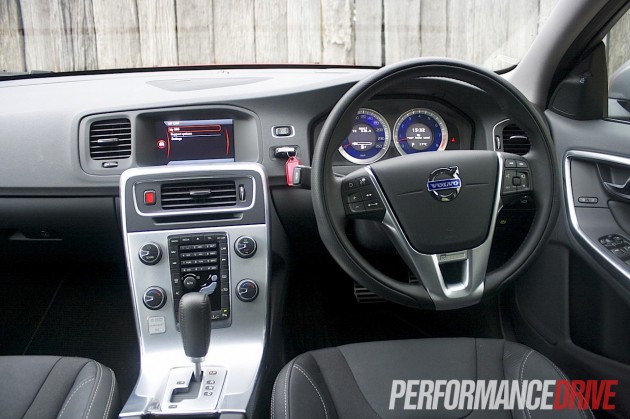 The dash consists of a centre display screen with all the functions you’d expect on a modern European sports sedan, including satellite navigation, climate control, voice-activated Bluetooth for your phone with music streaming, as well as USB support and a Premium audio system with Pro Logic (usually a $1425 option on other S60s). 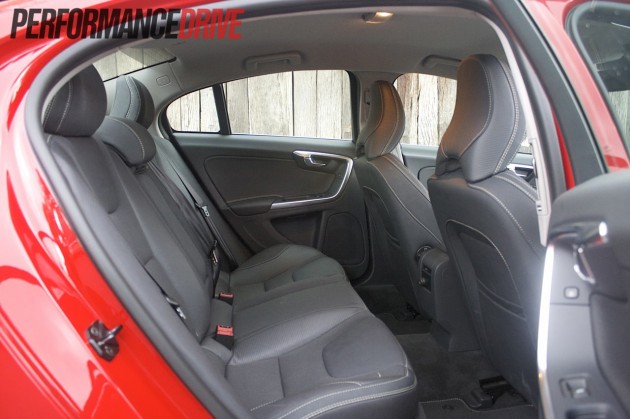 Unlike the other Polestar models available from Volvo, the S60 Polestar comes standard with the ‘Sports’ chassis – usually an $800 option on other models – as opposed to the ‘Dynamic’ chassis. (The Dynamic chassis is standard on the non-Polestar T6.)

The S60 has been around since 2010, and it still looks just as stunning today as it did when it was first unveiled. It showcases Volvo’s current design language which first debuted on the XC60 in 2007, with the pointed front end, soft front corners with an aggressive tail, and pouncing headlights and taillights. 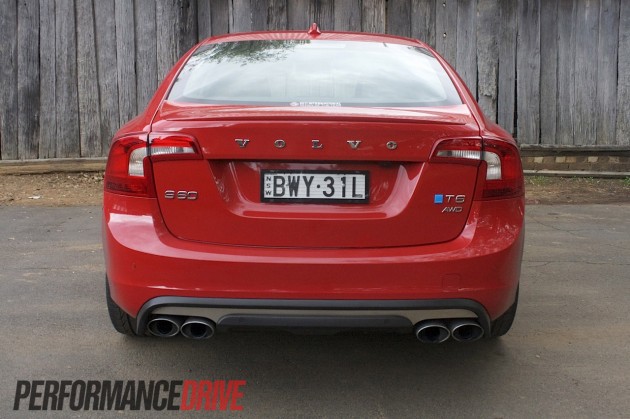 There are a lot of very cool leading edge safety devices with the S60, some of which are optional extras. The Polestar special edition comes with almost all of them though, including Active Bending Headlights and the Blind-Spot Information System (BLIS).

The S60 also gets side-impact protection (SIPS) and whiplash protection (WHIPS), and a multitude of airbags. As you would expect, ANCAP has given the S60 and V60 wagon five stars.

A lot of premium luxury vehicles are coming out with radar-guided cruise control systems these days. The S60 T6 Polestar gets a version as well (a $4175 option on lower-spec models), however, for the first time that we’ve seen, the S60 has an adjustable distance button on the steering wheel. This is a lot more useful – and less boring – than it might sound. 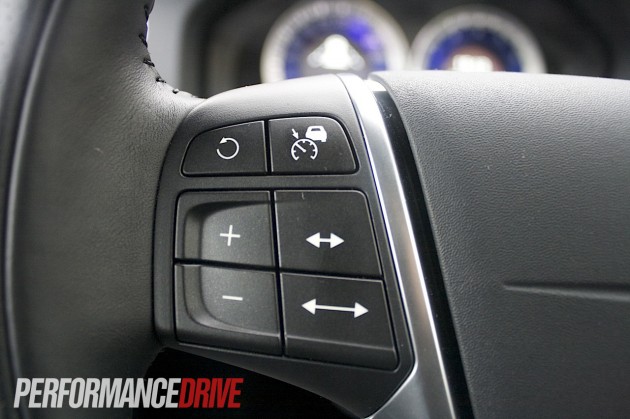 When you’re driving along the highway with these systems engaged, the radar leaves a safety buffer zone between you and the vehicle in front. As soon as the vehicle in front slows, your car is automatically braked to keep that safe distance in place.

This sounds good, at first. The problem is that more often than not, that safety buffer zone is rather large, so when you’re cruising along the highway you find yourself inadvertently leaving a biggish gap in front. Other motorists soon come along and fill that gap. Once this happens, of course, your car sees this and brakes – hard – to distance itself back to that buffer zone.

With the Volvo, having the ability to adjust this buffer zone is very handy as you can set it so there is still a safe distance between you and the car in front without leaving so much gap that another motorists come in and stuff up your smooth and efficient cruising. It’s especially good when you’re travelling along freeways with some traffic. 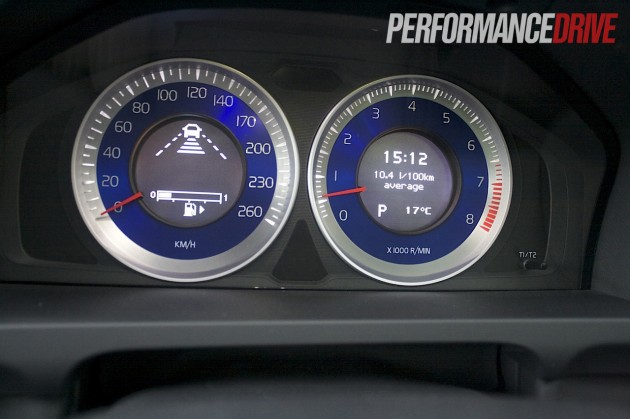 As for the Full Auto Brake function, we found it to behave very well. The S60 will brake itself with complete confidence and without awkward hesitation. It will also sound a warning buzzer and beam some orange and red lights on a head-up display if things are getting real close.

So, what you probably want to know is is this a proper performance sedan? Is it something special and not simply a Volvo with a bit more straight-line speed?

From the moment you hit the start button the engine fires into life with a low, bass-like burble, like a performance car. This instantly gives you an indication that this is not your typical sedan.

After a few corners and a few normal take-offs, you feel the well-weighted steering and the firm suspension is again, not like what is found on your typical sedan. 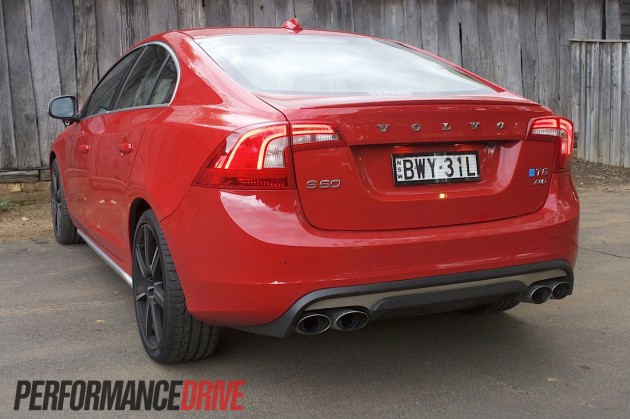 Let’s just cut to the chase here, this is certainly not your typical sedan. It is a genuine performance car. Nail the throttle off the mark (with the stability/traction control switched off) and the wheels will bite and even break traction on some surfaces.

Around corners the S60 Polestar really holds on and swings around like a kid on a clothesline. The Haldex all-wheel drive system does tend to let the front wheels free spin slightly under heavy acceleration through slow bends, but if anything this allows the revs to build to peak performance. At this stage, the S60 Polestar flings you along with gut-wrenching g-force. 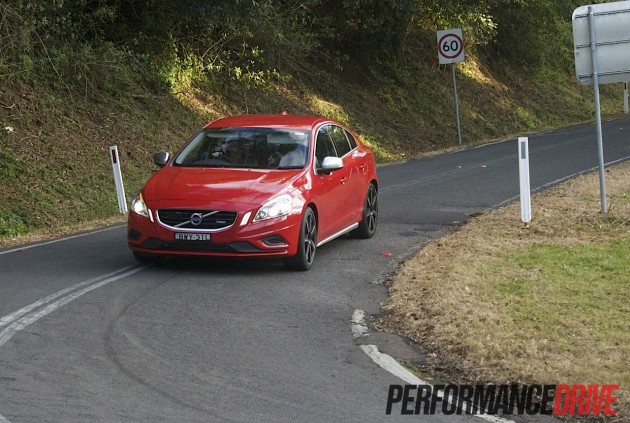 It’s an exciting car out in the twisty stuff. It might not have the absolute precision of a BMW or the solidness of a Mercedes-Benz, but it’s still very capable and lots of fun.

Perhaps the only let down for us is there is no flappy paddles. Flappy paddles on a base model hatch is not something we really think is necessary, but for a proper sports sedan like this we feel it could have heightened driver enjoyment even more. There is a plus-minus function with the gear selector though. Even simply leaving it in auto sport mode is satisfying.

In traffic and more usual driving conditions, the transmission has a tendency to be indecisive, especially at slow speeds when first and second gear is called upon. There is also some delay between forward and reverse gears. This could be due to our test vehicle possibly needing a transmission service. 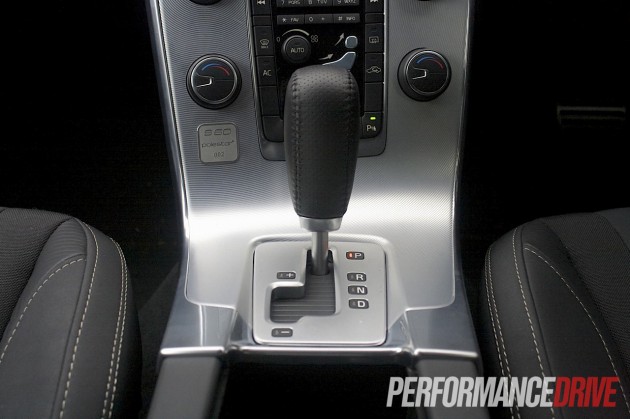 This is a great car. We wish more companies would release properly tantalising special editions like this. The raspy exhaust gives you joyous goose bumps, while the acceleration and low-down torque is brilliant.

The overall interior layout and comfort provides a cool, calm and collected environment, but with those striking looks on the outside, especially in red, it’s not fooling anyone.

We’ve said it before and we’ll say it again, this is a proper performance sedan by Volvo. With just 50 available on the market at a relatively low price – in regards to its rivals – these should sell very quickly indeed. If they haven’t already.

(After speaking with a Volvo dealer recently, we learned that apparently a large chunk of new Volvo buyers are opting for the regular Polestar tune. Maybe we’ll see another special edition like this further down the track?) 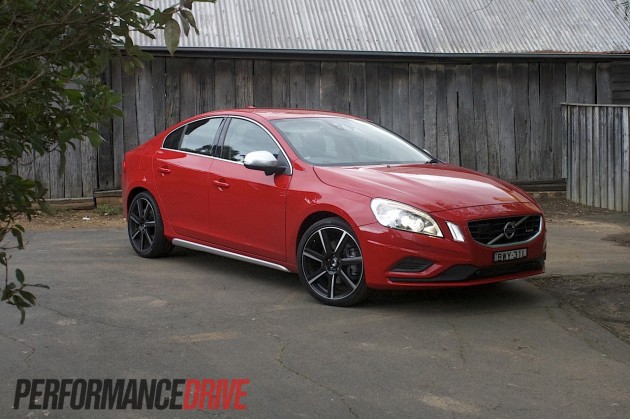