Volkswagen has revealed the production version of the Volkswagen Golf GTI Cabriolet prior to next week’s Geneva debut. This is the first GTI cabriolet since the first-generation Golf of the Seventies. 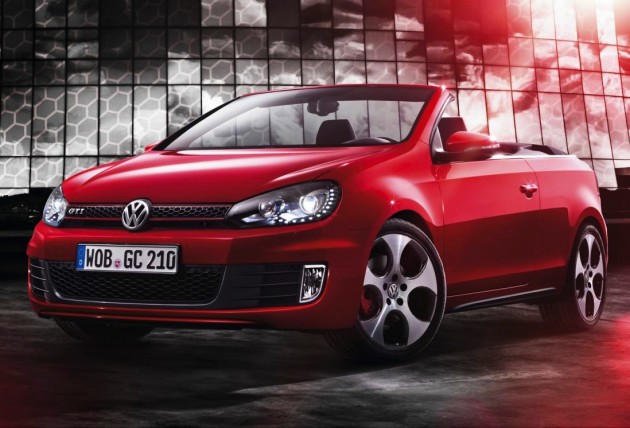 The drop-top model is powered by the same 2.0-litre TFSI turbocharged four-cylinder engine as seen in the current Golf. It produces 155kW of power and 280Nm of torque. Volkswagen says acceleration from 0-100km/h can be dealt with in 7.3 seconds – 0.4 seconds slower than the hatch.

All regular features on the GTI hatch are carried over onto the Cabriolet, with slight changes to some trimmings. Inside features the same sports seats, including in the rear. Boot space is likely to be compromised due to the storage required for the flip down roof.

Speaking of the roof, it’s an electronic fabric item which can be folded down in 9.5 seconds at the touch of a button. Converting between up and down can be done at speeds up to 30km/h.

It’s set to go on sale in Europe during the second half of this year. Volkswagen Australia is apparently still considering if it will introduce the variant into local showrooms. The drop-top is expected to be the last of the Mk6 range before the new model comes in.

In other Volkswagen-Geneva news, the company has plans to unveil the Volkswagen Polo GTI Blue at the international show. It’s set to feature a boosted 1.4-litre 103kW TSI four-cylinder engine equipped with cylinder deactivation technology.

Essentially, the deactivation technology means the Polo Blue can run on just two cylinders during low loads, saving fuel by as much as 0.4L/100km. The technology will only ever engage between engine speeds of 1250rpm and 4000rpm.